Do you want to save dozens of hours in time? Get your evenings and weekends back? Be able to teach Eyam and the Great Plague to your students? 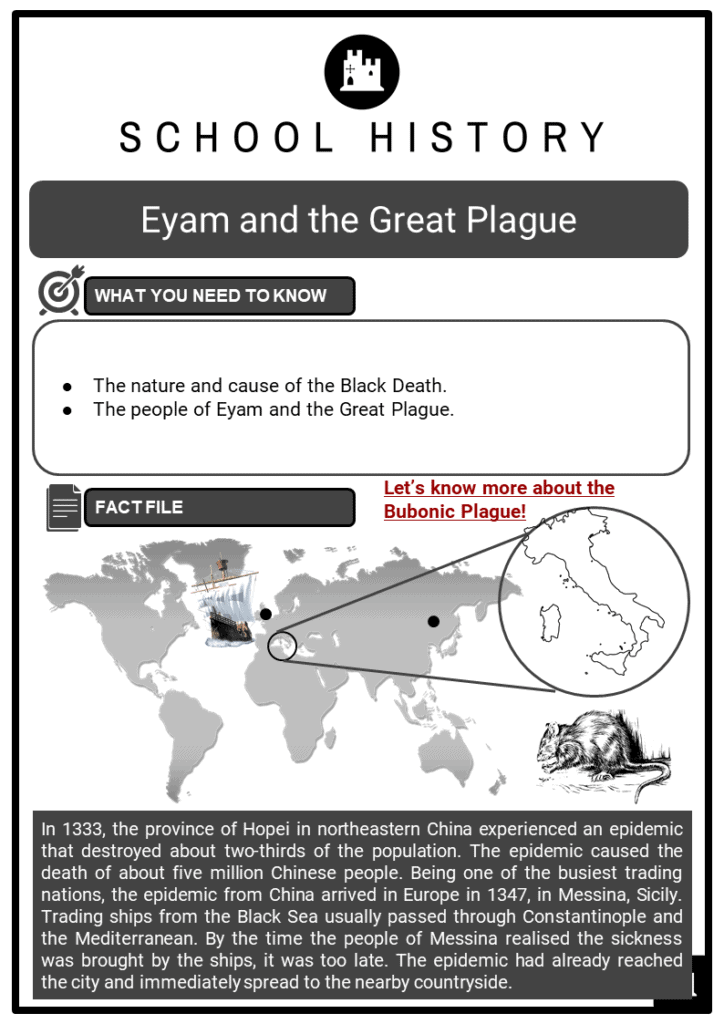 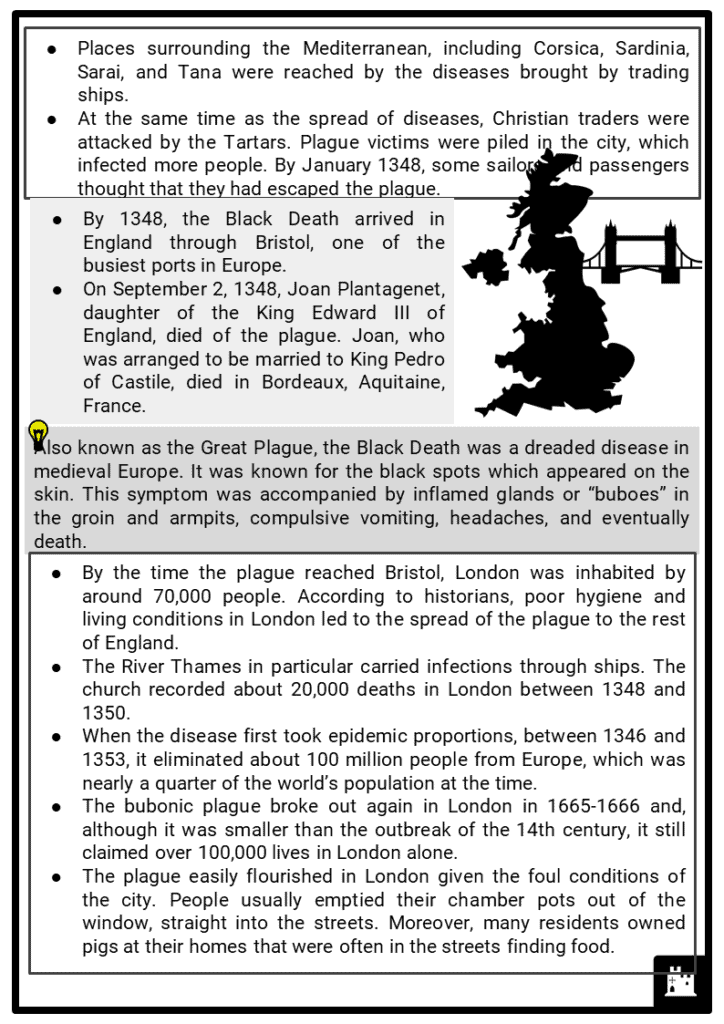 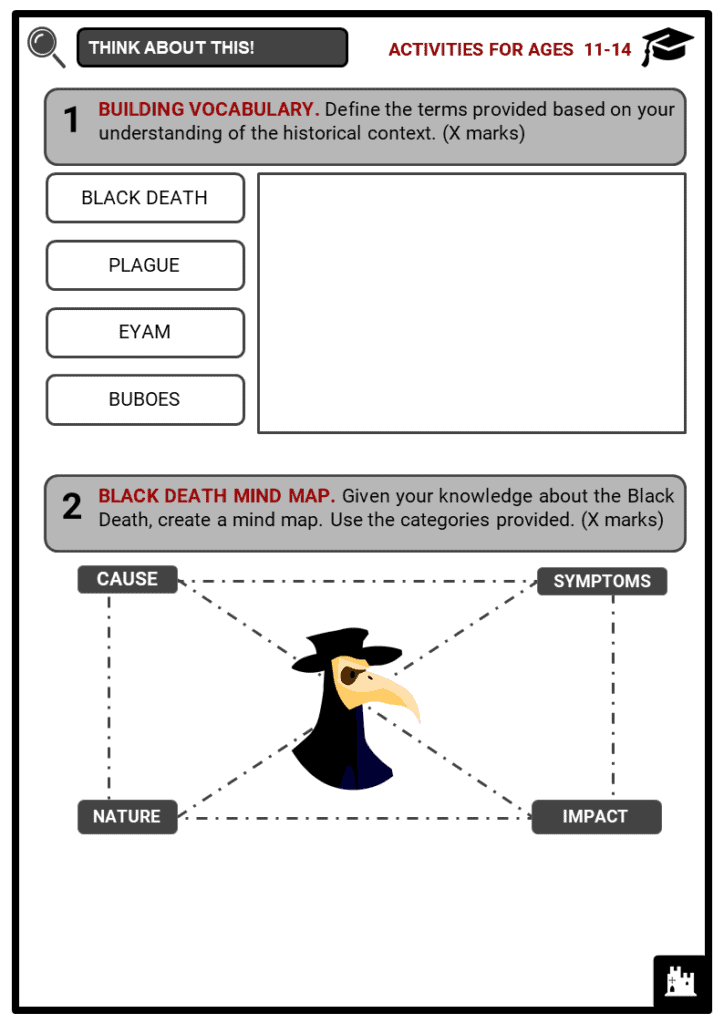 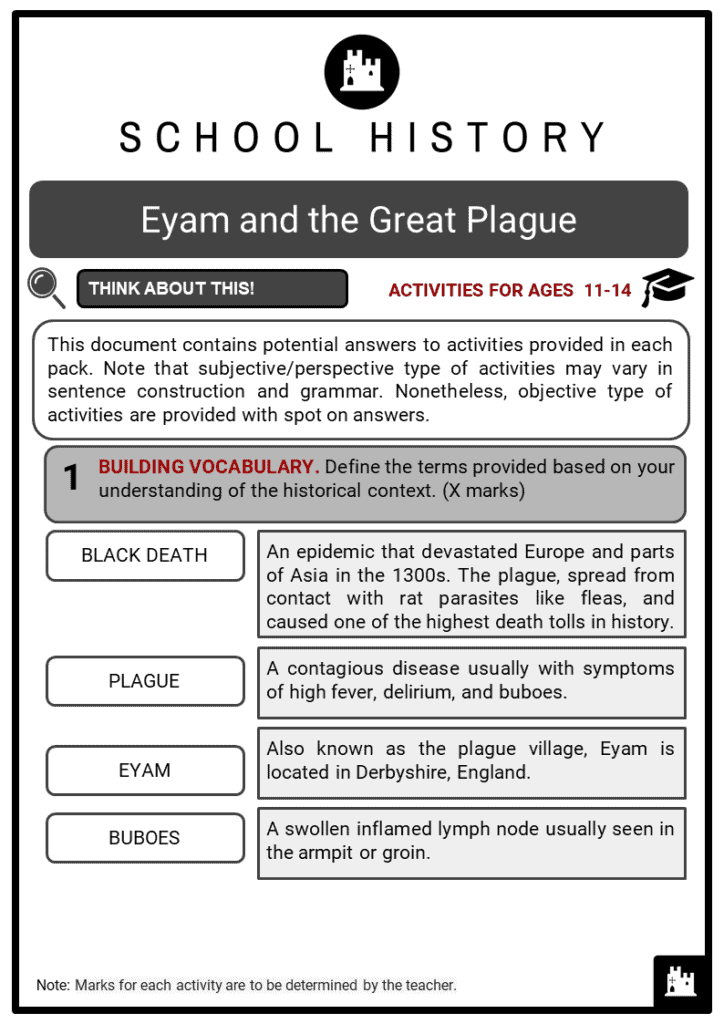 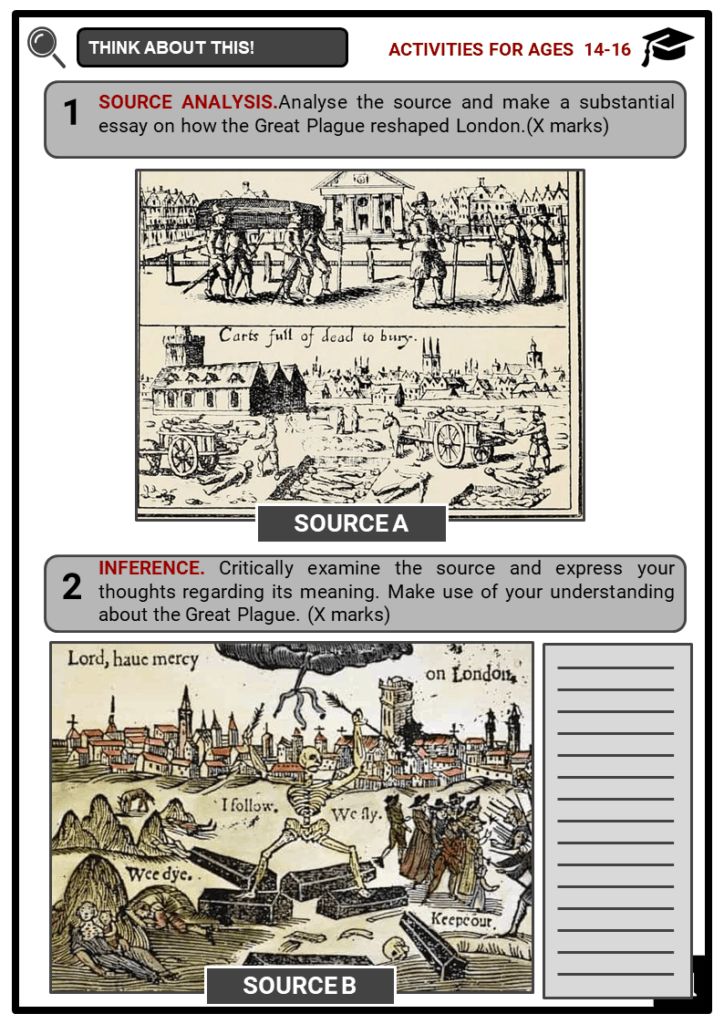 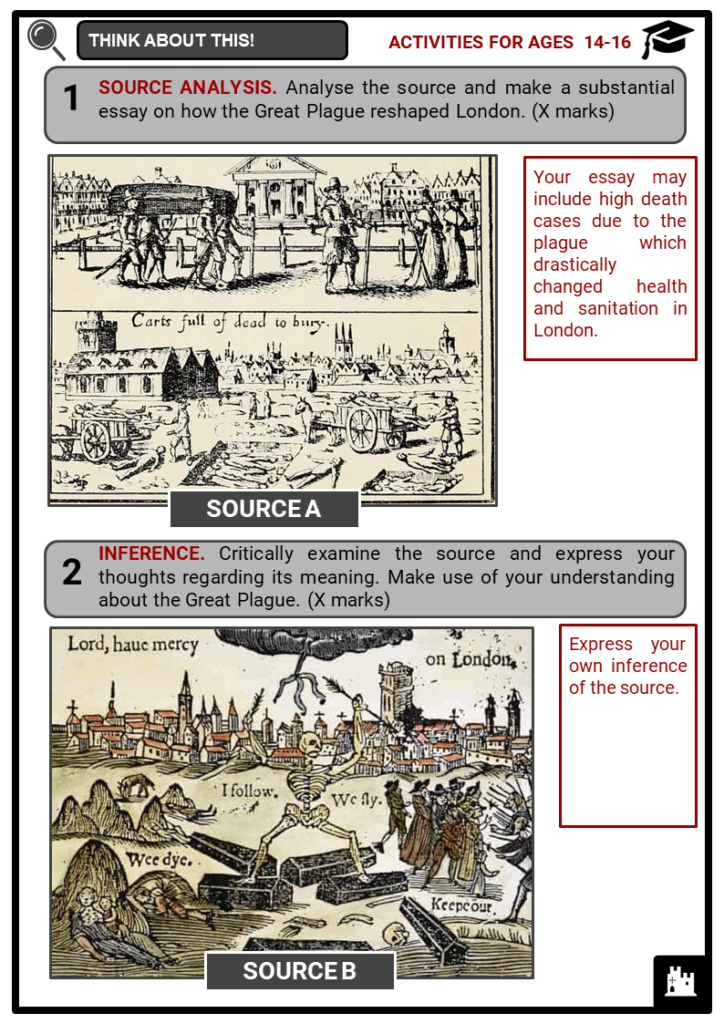 It all started with cloth. The plague reached the village of Eyam (in Derbyshire, 35 miles southeast of Manchester), in the summer of 1665, when a London merchant sent flea-infested fabrics to the village tailor, Alexander Hadfield. 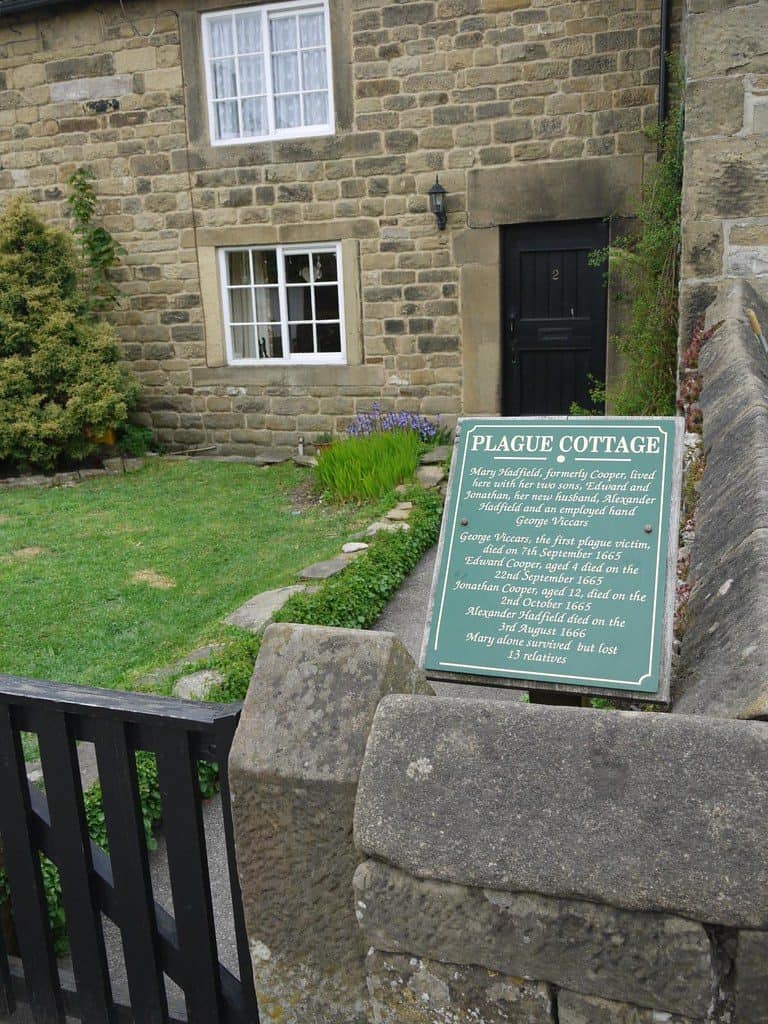 The tailor's assistant, George Viccars, was the first one to receive the fabrics. Viccars noticed that the cloth was damp and attempted to dry it by spreading it out it in front of his fireplace. The unfortunate man had not noticed that fleas had created a nest inside of it. These fleas were not on their own either - they were carrying the bacteria of the bubonic plague.

This was how the village of Eyam was struck by the Black Death. Viccars was the first person in the small British town to be struck by the disease and die. Then, the contagion began to rapidly spread to the rest of the village causing great panic and upheaval. The citizens were scared and felt threatened by the sickness. Their initial intention was to flee the city to save themselves. However, two local pastors, William Mompesson and Thomas Stanley, intervened. It was a difficult decision to accept, but with their authority they managed to convince their fellow villagers that the best thing to do was to stay. Therefore, they shut the gates of the city until the plague was over. The two religious authorities stated that it was their duty as Christians to stop the plague, no matter the price, as God would reward them for their sacrifice.

With the villagers convinced, the town cut off all communication with its neighbours: no one could leave and no one could enter. Meanwhile, people inside the village died in high numbers. Food, water, and other basic necessities were sent from the countryside.

Of the 350 original inhabitants, only 90 survived. That year, no household was spared. The wife of Mompesson, the priest who asked everyone to stay, also died. But when the disease stopped spreading, Eyam’s goals had been achieved and the plague stopped spreading.

The Great Plague that spread from London affected many places in England. No other town or village acted in the same way as Eyam, however. Today it is remembered for the heroic sacrifice made by its inhabitants.

The bubonic plague was a dreaded disease in medieval Europe. It was known as the Black Death as black spots appeared on victims' skin. This symptom was accompanied by inflamed glands or "buboes" in the groin and armpits, compulsive vomiting, headaches, and eventually death.

When the disease first took epidemic proportions between 1346 and 1353, it eliminated about 100 million people from Europe, which was nearly a quarter of the world's population at the time. The bubonic plague broke out again in London in 1665-66 and, although it was smaller than the outbreak of the 14th century, it still claimed over 100,000 lives in London alone.

Stones were placed around the outskirts of the village to indicate that people should not go beyond that point. All Eyam residents - even those who were in good health - vowed not to leave until the disease had run its course.

The village received food and help from other neighbouring villagers who left parcels of meat, grains and other items on the outskirts of the town. In return, the residents of Eyam left coins in a bowl filled with vinegar and water as it was believed that vinegar acted as a disinfectant. The stones around the village still exist and can be viewed today.

Aside from being quarantined, villagers also took steps to minimise the spread of infection within the village. The church was moved to another location, which was far from the cemetery, and families were required to bury their own dead. Many surviving members experienced the trauma of burying their entire family, the priest Mompesson was no exception. Sometimes, bodies were dragged into the street by tying ropes around the victim's feet to avoid contact with the deceased.

After 14 months, the plague disappeared abruptly by which time 260 villagers of the original 350 were dead.

Today, there are plaques, signs and memorials all over the village and the last Sunday of every August is known as Plague Sunday - a memorial service held in Eyam.

People visit these boundary stones and deposit coins to honour the victims of the plague.