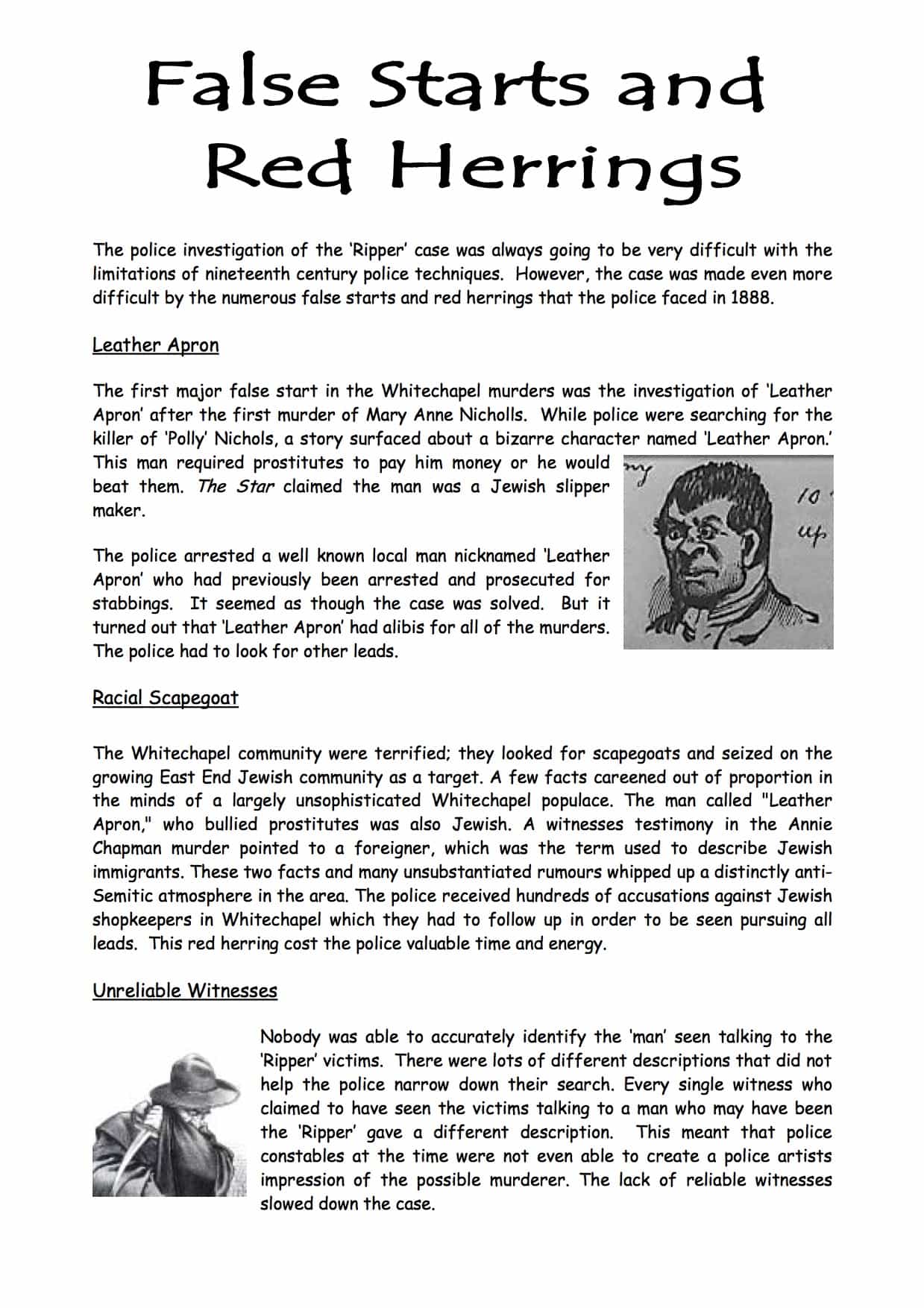 The police investigation of the ‘Ripper’ case was always going to be very difficult with the limitations of nineteenth century police techniques. However, the case was made even more difficult by the numerous false starts and red herrings that the police faced in 1888.

The first major false start in the Whitechapel murders was the investigation of ‘Leather Apron’ after the first murder of Mary Anne Nicholls. While police were searching for the killer of ‘Polly’ Nichols, a story surfaced about a bizarre character named ‘Leather Apron.’ This man required prostitutes to pay him money or he would

beat them. The Star claimed the man was a Jewish slipper maker.

The police arrested a well known local man nicknamed ‘Leather Apron’ who had previously been arrested and prosecuted for stabbings. It seemed as though the case was solved. But it turned out that ‘Leather Apron’ had alibis for all of the murders. The police had to look for other leads.

The Whitechapel community were terrified; they looked for scapegoats and seized on the growing East End Jewish community as a target. A few facts careened out of proportion in the minds of a largely unsophisticated Whitechapel populace. The man called “Leather Apron,” who bullied prostitutes was also Jewish. A witnesses testimony in the Annie Chapman murder pointed to a foreigner, which was the term used to describe Jewish immigrants. These two facts and many unsubstantiated rumours whipped up a distinctly anti- Semitic atmosphere in the area. The police received hundreds of accusations against Jewish shopkeepers in Whitechapel which they had to follow up in order to be seen pursuing all leads. This red herring cost the police valuable time and energy.

Nobody was able to accurately identify the ‘man’ seen talking to the ‘Ripper’ victims. There were lots of different descriptions that did not help the police narrow down their search. Every single witness who claimed to have seen the victims talking to a man who may have been the ‘Ripper’ gave a different description. This meant that police constables at the time were not even able to create a police artists impression of the possible murderer. The lack of reliable witnesses slowed down the case.

What about the chalk writing found over an hour later on Goulston Street under which lay a portion of Catherine Eddowes bloody apron?

“The Juwes are the men that will not be blamed for nothing.”

Was this really a clue about the religion of the murderer or was it another red herring? It has been suggested that the message was not written by the murderer and just happened to be where the killer dropped or placed the bloody piece of apron. There was also the chance that the message was a deliberate attempt designed to blame the Jews and throw the police off the track of the real murderer. This opinion was held by Scotland Yard and the Jewish community.

A letter was sent on October 16th 1888 to George Lusk who was the head of an East End neighbourhood watch group called the Mile End Vigilance Committee. The letter was sent with a portion of a human kidney. Lusk was extremely upset. Dr. Thomas Openshaw at the London Hospital examined it and established that it was a human adult kidney, which was preserved in spirits rather than in formalin, such as that used in hospitals for specimens. The letter that accompanied the kidney was not written by the ’Dear Boss’ author.

Signed
Catch me when You can Mishter Lusk