Jack the Ripper: Limitations of the Police Force

Download Jack the Ripper: Limitations of the Police Force 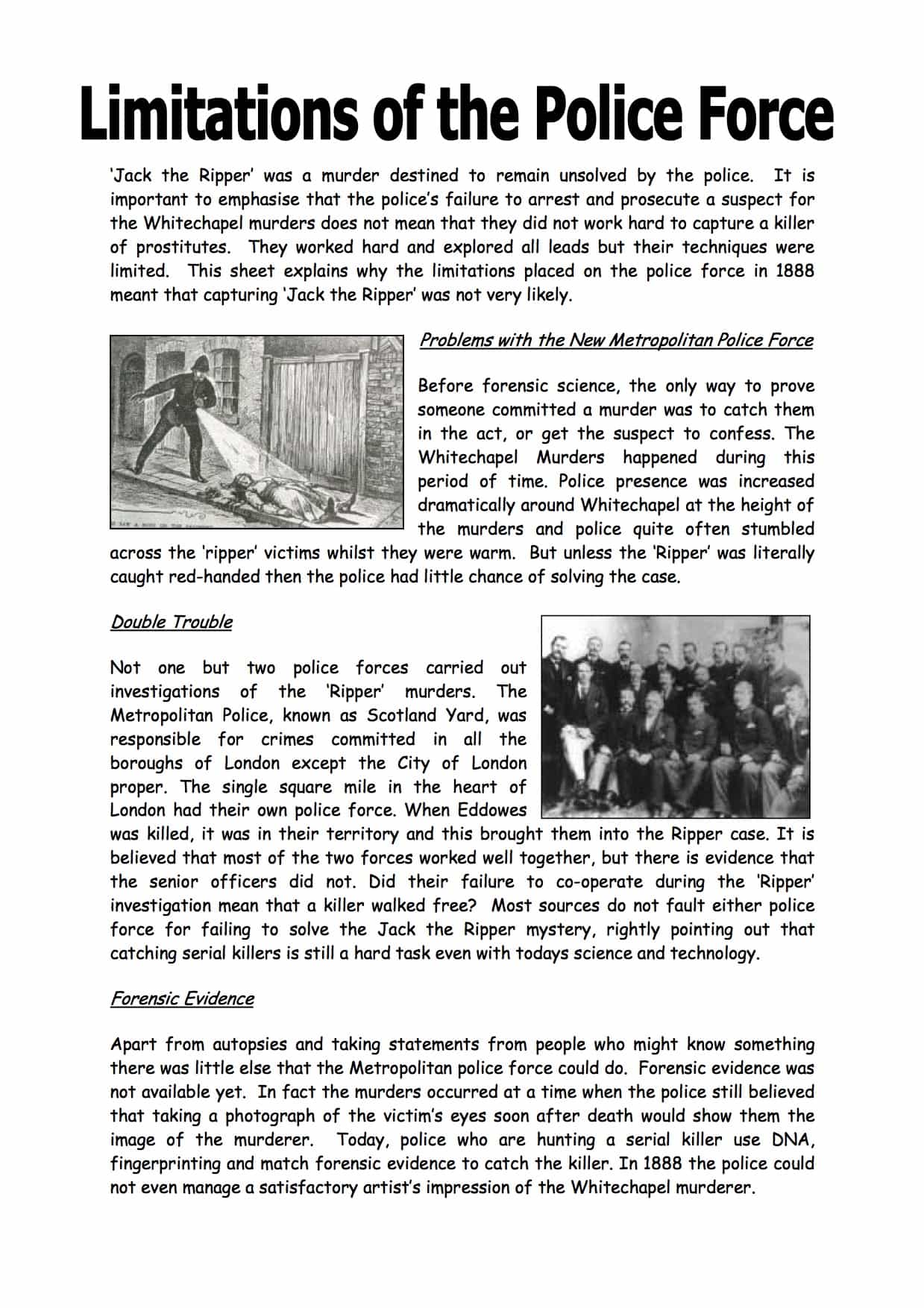 ‘Jack the Ripper’ was a murder destined to remain unsolved by the police. It is important to emphasise that the police’s failure to arrest and prosecute a suspect for the Whitechapel murders does not mean that they did not work hard to capture a killer of prostitutes. They worked hard and explored all leads but their techniques were limited. This sheet explains why the limitations placed on the police force in 1888 meant that capturing ‘Jack the Ripper’ was not very likely.

Before forensic science, the only way to prove someone committed a murder was to catch them in the act, or get the suspect to confess. The Whitechapel Murders happened during this period of time. Police presence was increased dramatically around Whitechapel at the height of the murders and police quite often stumbled across the ‘ripper’ victims whilst they were warm. But unless the ‘Ripper’ was literally caught red-handed then the police had little chance of solving the case.

Not one but two police forces carried out investigations of the ‘Ripper’ murders. The Metropolitan Police, known as Scotland Yard, was responsible for crimes committed in all the
boroughs of London except the City of London proper. The single square mile in the heart of London had their own police force. When Eddowes was killed, it was in their territory and this brought them into the Ripper case. It is believed that most of the two forces worked well together, but there is evidence that the senior officers did not. Did their failure to co-operate during the ‘Ripper’ investigation mean that a killer walked free? Most sources do not fault either police force for failing to solve the Jack the Ripper mystery, rightly pointing out that catching serial killers is still a hard task even with todays science and technology.

Apart from autopsies and taking statements from people who might know something there was little else that the Metropolitan police force could do. Forensic evidence was not available yet. In fact the murders occurred at a time when the police still believed that taking a photograph of the victim’s eyes soon after death would show them the image of the murderer. Today, police who are hunting a serial killer use DNA, fingerprinting and match forensic evidence to catch the killer. In 1888 the police could not even manage a satisfactory artist’s impression of the Whitechapel murderer.

Lack of a Reward

It was common for the police to offer a reward to the local population for any information that they could offer about serious crimes. This was not the case with the Whitechapel murders. The attitude of the people at the time was that the police were incompetent and that the Commissioner, Sir Charles Warren, was only good for policing crowds and keeping order rather than detective work. He was especially criticized for not offering a reward in the hope that an accomplice would come forwards against the Ripper. In fact, Warren had no objections for a reward being offered and it was his superior, Henry Matthews, the Home Secretary who refused the sanction of a reward.

One of the splits between the leadership of the two forces was over graffito found in Goulston Street on the night of the “double event”. A piece of Eddowes’ apron, which the Ripper used to wipe off his knife, was found by a constable near a doorway that had a chalked message over the door. This message, “The Juwes are the men That Will not be blamed for nothing”, may have been written by the Ripper and the City police officers wanted to photograph it. Warren felt that leaving it until it was light enough to be photographed might cause riots against the Jews living in Whitechapel whom the English residents already believed were responsible for the murders.

In the end the police never charged any suspect with the murders committed by the Ripper which shows they did not have a sufficient amount of evidence that would gain a verdict of guilty in criminal court. This had more to do with the limitations of police work at the time and nothing to do with the amount of effort put into the investigation.