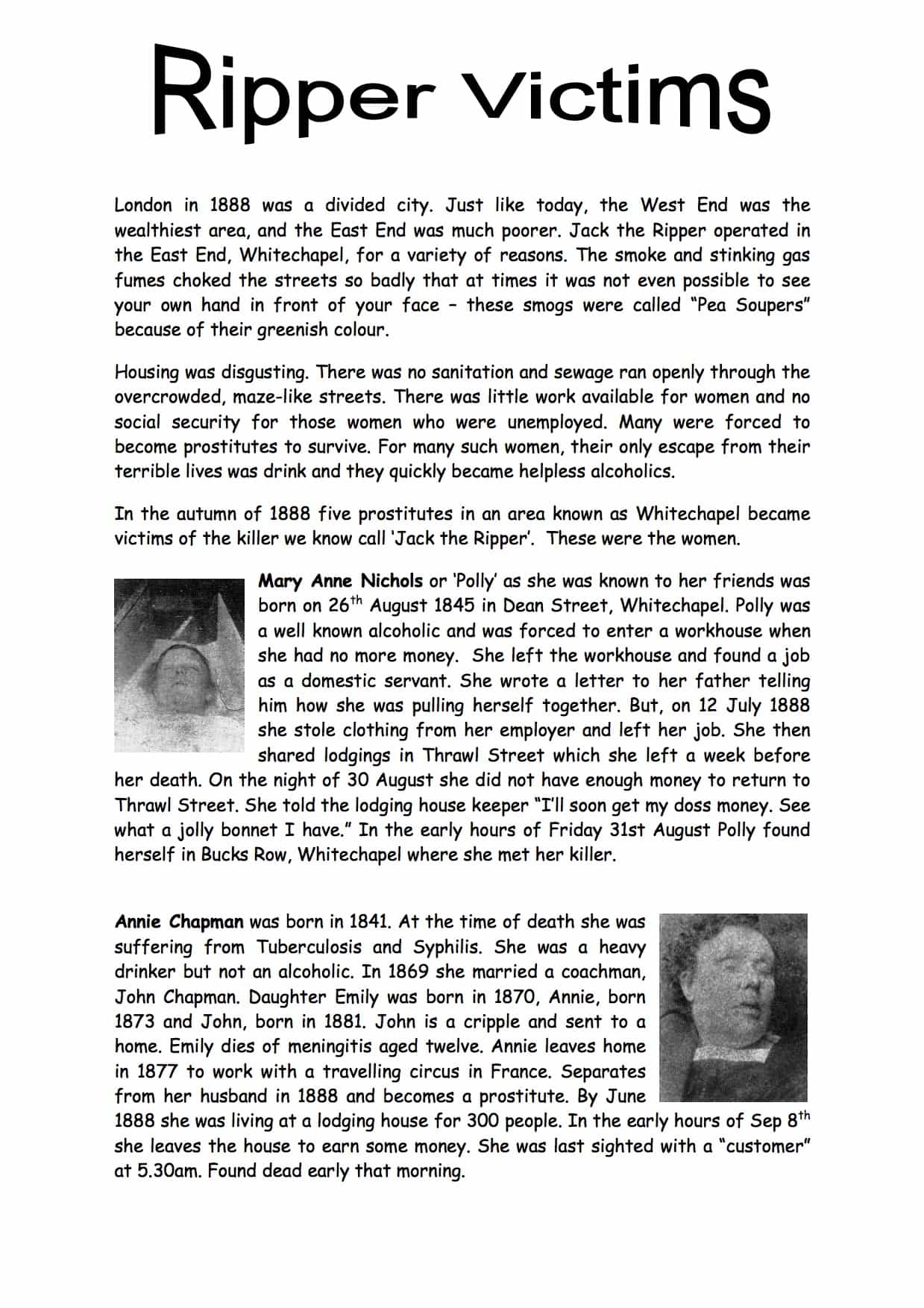 London in 1888 was a divided city. Just like today, the West End was the wealthiest area, and the East End was much poorer. Jack the Ripper operated in the East End, Whitechapel, for a variety of reasons. The smoke and stinking gas fumes choked the streets so badly that at times it was not even possible to see your own hand in front of your face – these smogs were called “Pea Soupers” because of their greenish colour.

Housing was disgusting. There was no sanitation and sewage ran openly through the overcrowded, maze-like streets. There was little work available for women and no social security for those women who were unemployed. Many were forced to become prostitutes to survive. For many such women, their only escape from their terrible lives was drink and they quickly became helpless alcoholics.

In the autumn of 1888 five prostitutes in an area known as Whitechapel became victims of the killer we know call ‘Jack the Ripper’. These were the women.

Mary Anne Nichols or ‘Polly’ as she was known to her friends was born on 26th August 1845 in Dean Street, Whitechapel. Polly was a well known alcoholic and was forced to enter a workhouse when she had no more money. She left the workhouse and found a job as a domestic servant. She wrote a letter to her father telling him how she was pulling herself together. But, on 12 July 1888 she stole clothing from her employer and left her job. She then shared lodgings in Thrawl Street which she left a week before her death. On the night of 30 August she did not have enough money to return to Thrawl Street. She told the lodging house keeper “I’ll soon get my doss money. See what a jolly bonnet I have.” In the early hours of Friday 31st August Polly found herself in Bucks Row, Whitechapel where she met her killer.

Annie Chapman was born in 1841. At the time of death she was suffering from Tuberculosis and Syphilis. She was a heavy drinker but not an alcoholic. In 1869 she married a coachman, John Chapman. Daughter Emily was born in 1870, Annie, born 1873 and John, born in 1881. John is a cripple and sent to a home. Emily dies of meningitis aged twelve. Annie leaves home in 1877 to work with a travelling circus in France. Separates from her husband in 1888 and becomes a prostitute. By June 1888 she was living at a lodging house for 300 people. In the early hours of Sep 8th she leaves the house to earn some money. She was last sighted with a “customer” at 5.30am. Found dead early that morning.

Born in Sweden in 1843 and by 1860 is working as a servant. The police registered her as a prostitute in 1865; she was later treated for venereal disease. 1866 – moves to the Swedish parish in London and marries John Thomas Stride, a carpenter. After the marriage John and Liz keep a coffee shop but she separates from her husband. By 1882 she has moved into a workhouse. In 1885 she is living with Michael Kidney, a waterside labourer, who says that she was frequently absent when she was drinking and he even tried, unsuccessfully, to padlock her in. On Sep 30th she left a pub in the early hours with an unidentified man, and was found dead later on that morning.

Born in Wolverhampton in 1842 but moves to London with her father. Her mother dies c.1860 so she returns to Wolverhampton and is educated by her aunt. c. Between 1861-1863 she leaves home with Thomas Conway, an old soldier. The couple sell cheap books in Birmingham. As a couple they had three children. Annie, born 1865, George, born around 1868 and another son born around 1875. Kate develops a drinking problem around 1881 and returns to London where she moves in with John Kelly. On September 28th 1888 they both rent a cheap bed for a night at different doss houses. On Sep 29th – Kelly pawns some boots so that he and Kate can have breakfast together. At 8pm she is arrested for being drunk and disorderly (imitating a fire engine) and put in the cells. On Sep 30th – she was released in the early hours of the morning. 1.45am – Her body is found 10 minutes away from the station.

Born in Limerick in 1863 and. c.1870 her family moved to Wales. In 1879 she married a collier named Davies but he was killed in 1882 so Kelly moves to Cardiff and works as a prostitute. She arrived in London in 1884 where she worked in a high class brothel in the West End and just one year later she developed a drink problem so moved to Mrs. Carthy’s brothel in the East End. Mary Jane returns to the streets in 1888. In September she was fined 2/6 by the

Thames Magistrate Court for being drunk and disorderly. By October – Mary is letting prostitutes sleep in her room. On November 8th 1888 (evening) Kelly is last seen singing in the street, completely drunk. But on November 9th Kelly’s landlord, demanding her rent, breaks into her room and finds her terribly mutilated body on the bed.