Do you want to save dozens of hours in time? Get your evenings and weekends back? Be able to teach The Development of Germ Theory to your students? 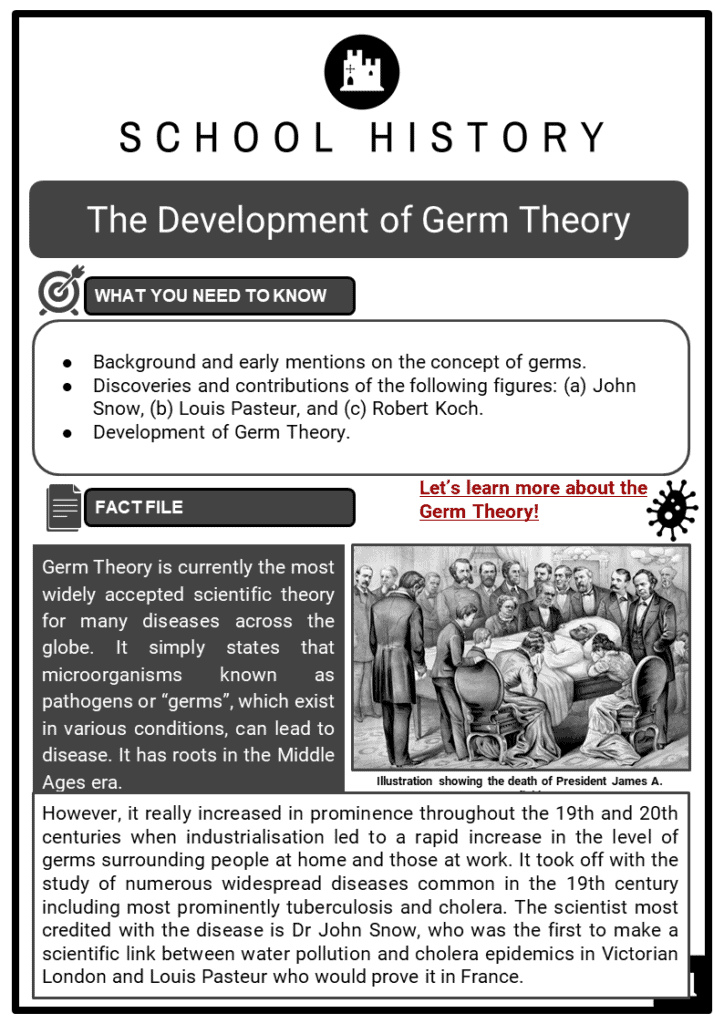 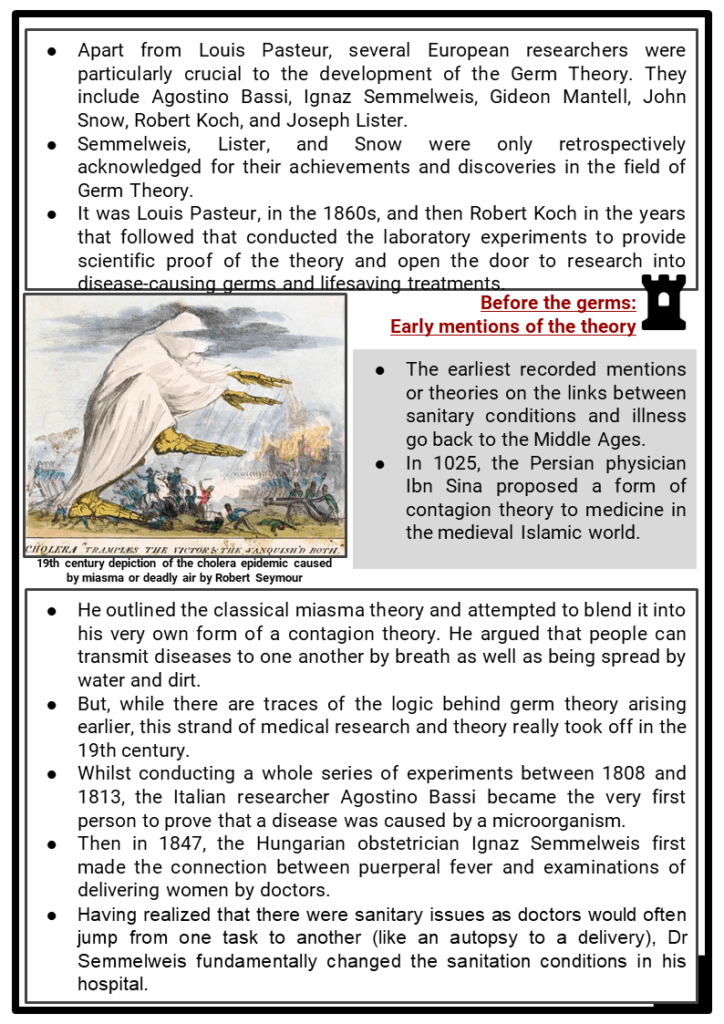 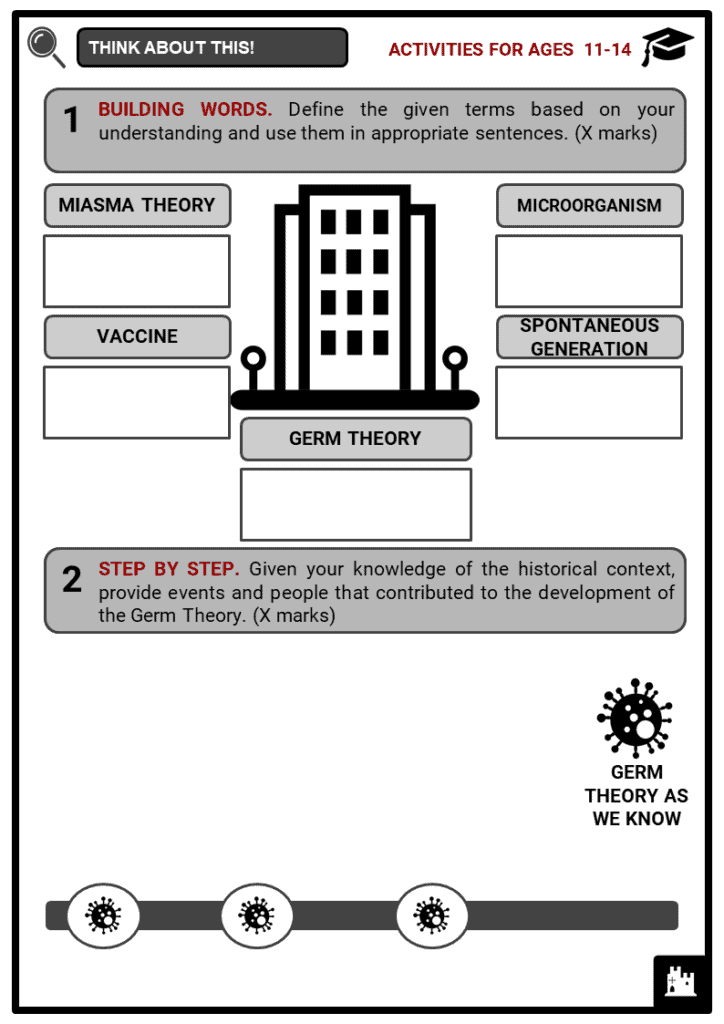 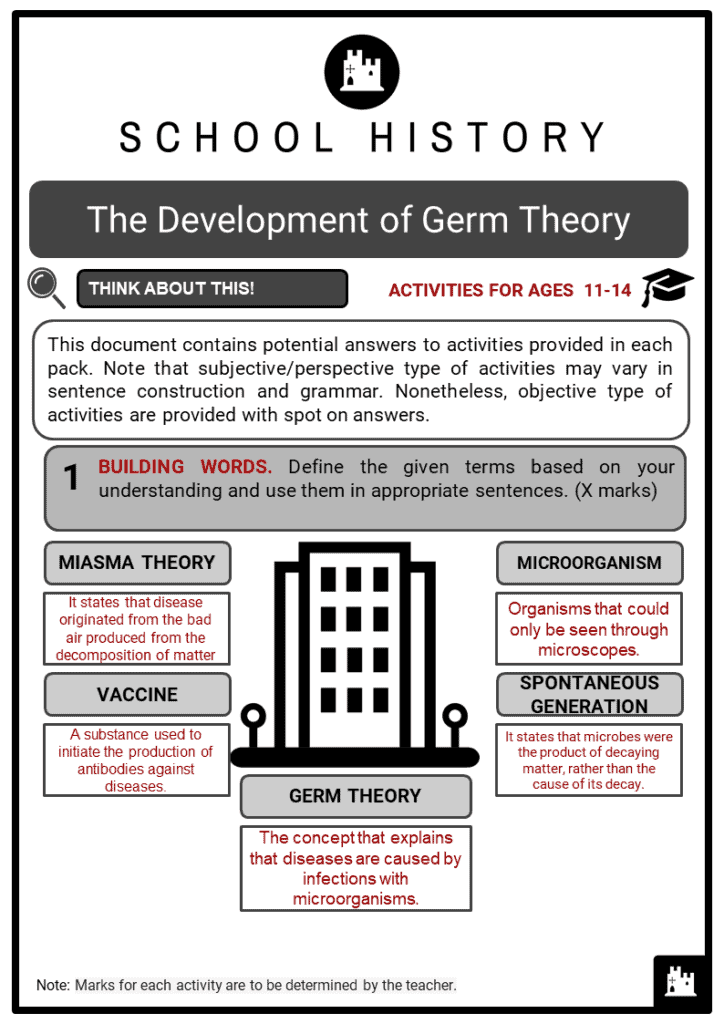 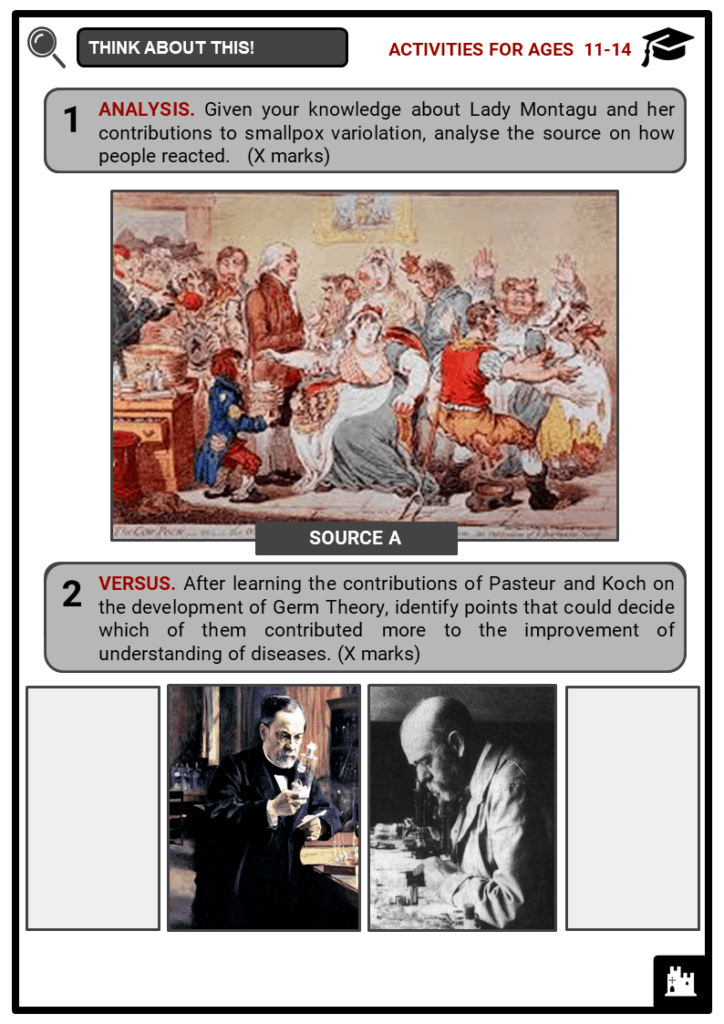 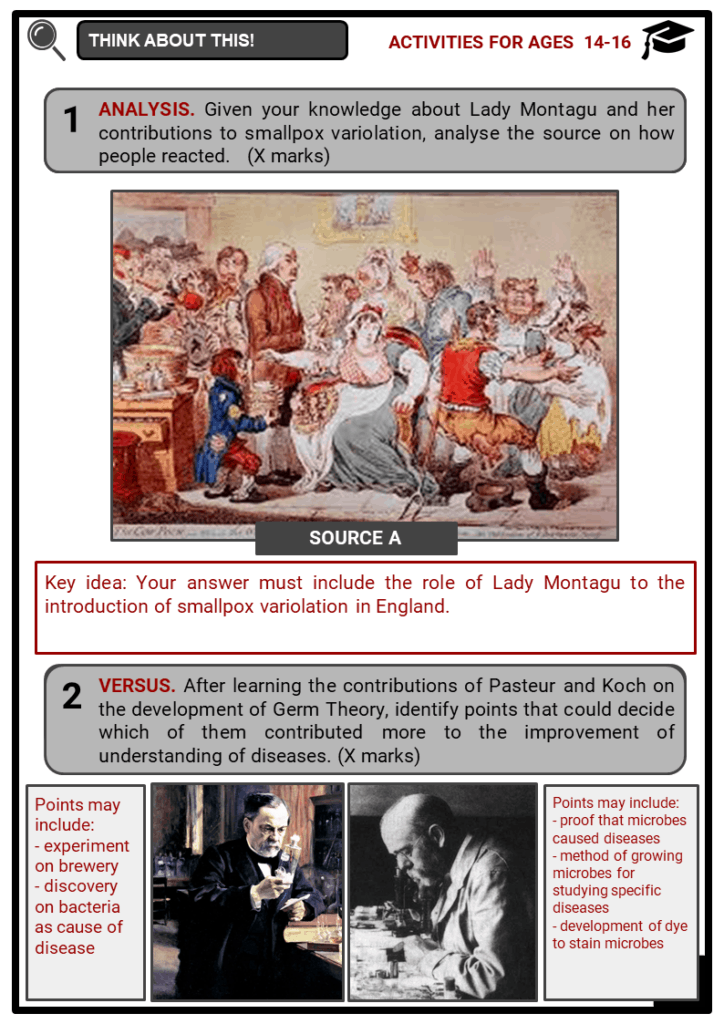 The earliest recorded mentions or theorising on the links between sanitary conditions and illness go back to the Middle Ages. In 1025, the Persian physician Ibn Sina proposed a form of contagion theory to medicine in the medieval Islamic world. He outlined the classical miasma theory and attempted to blend it into his very own form of a contagion theory. He argued that people can transmit diseases to one another by breath as well that it can be spread by water and dirt.

But, while there are traces of the logic behind germ theory arising earlier, this strand of medical research and theory really took off in the 19th century. Whilst conducting a whole series of experiments between 1808 and 1813, the Italian researcher Agostino Bassi became the very first person to prove that a disease was caused by a microorganism.

Then in 1847 the Hungarian obstetrician Ignaz Semmelweis first made the connection between puerperal fever and examinations of delivering women by doctors. Having realised that there were sanitary issues as doctors would often jump from one task to another (like an autopsy to a delivery), Dr Semmelweis fundamentally changed the sanitation conditions in his hospital. By doing so he reduced the mortality rate from 18% to just over 2%! 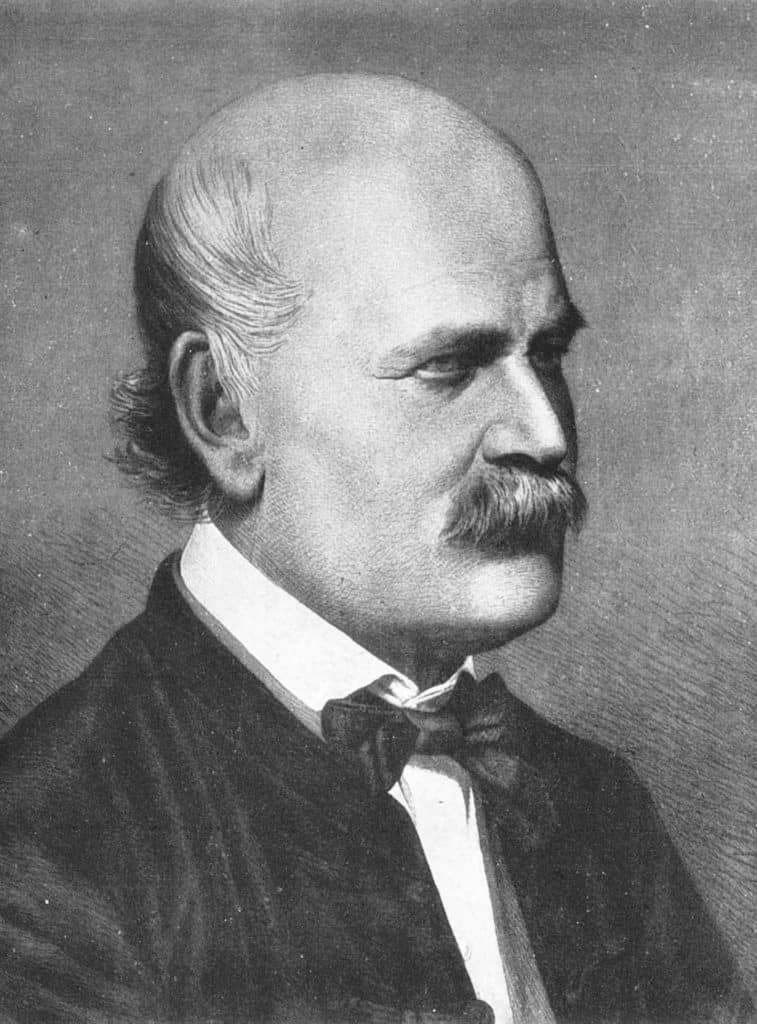 Dr John Snow was infamously very sceptical of the miasma theory of illness which was still fairly dominant in the first half of the 19th century. Although in his era the germ theory of disease which was pioneered by Girolamo Fracastoro had not yet been fully developed, Dr Snow demonstrated a very clear understanding of it in his publications.

While many were still following the miasma theory of disease, Dr Snow was recommending for water in London to be filtered and boiled before use as early as 1849. Today this is known as one of the very first practical applications of germ theory.

While Dr Snow’s chemical examination of a water sample from the Broad Street pump was not able to prove its danger, he instead made a convincing enough argument by studying the disease’s pattern. Snow mapped the cluster of cholera cases around the pump and used statistics to demonstrate that there was a connection between the quality of the water that residents drunk and their contractions of cholera. As he was able to persuade the local council to disable the infected well pump, he has been commonly credited as ending the 1854 outbreak.

While the local council did listen to John Snow, they refused to accept his theory of disease transmission and reopened the well after the epidemic subsided.

While John Snow’s achievements on germ theory occurred in medical research in England, it was a study of alcohol in neighbouring France that actually confirmed germ theory.

The French scientist Louis Pasteur was commissioned by a French alcohol company to investigate why sugar beet which was used in the fermentation of wine turned sour after some time. Pasteur conducted studies and determined that the alcohol had turned due to the germs in the air that the fermenting alcohol had come into contact with. He proved this by sterilising water and placing it in a swan neck flask to prevent any contact with the air. 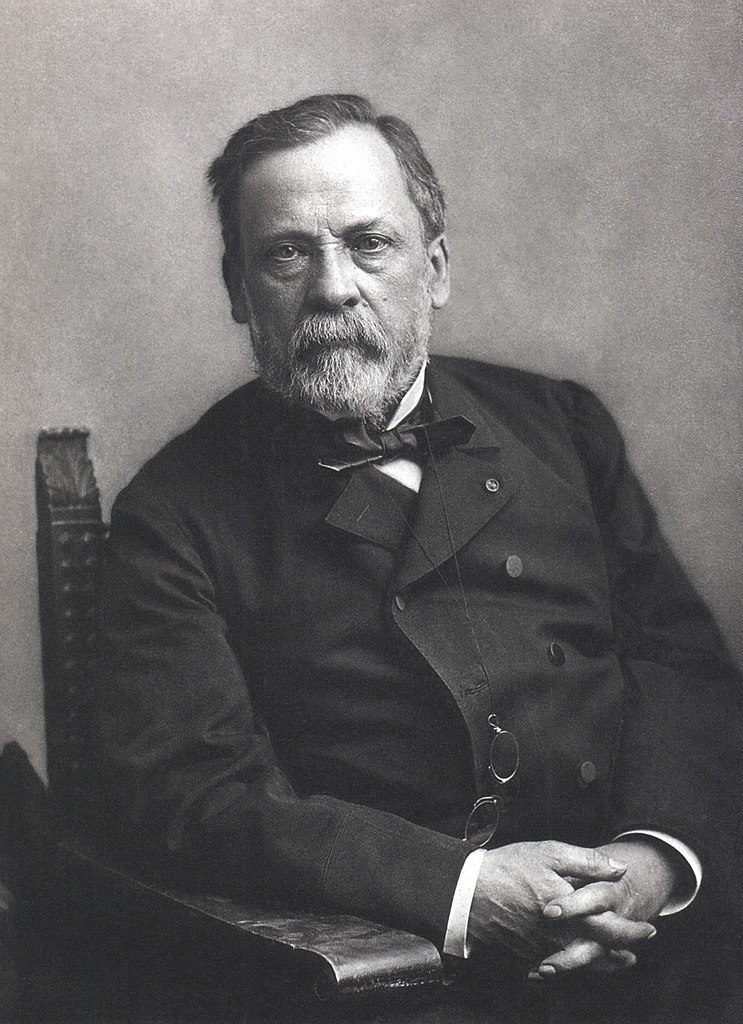 Pasteur was finally able to prove that it was bacteria that caused disease rather than the other way around (the so-called theory of “spontaneous generation”). After wine, he turned his research to silkworms and their health – which to this day produce silk for the clothing industry. Louis Pasteur experimented with silkworms and discovered that they became ill when they came into contact with others who suffered from the disease. This way, Pasteur was able to prove that a cell’s environment had direct effects on contagion. He was thus able to begin urging hospitals to increase sterilisation to control the disease.

Pasteur conducted a whole series of formal experiments on the links between germs and diseases in 1860-1864 making discoveries that scientists still use and rely on today. He is as such seen as the father of the Germ Theory of Disease.

Building on the work of his colleagues and his own research, Robert Koch discovered exactly which bacteria cause which illnesses, including anthrax (1876), septicaemia (1878), tuberculosis (1882) and cholera (1883). He did so by discovering first how to stain and grow bacteria in a ‘Petri dish’ (which was named after his assistant Julius Petri). 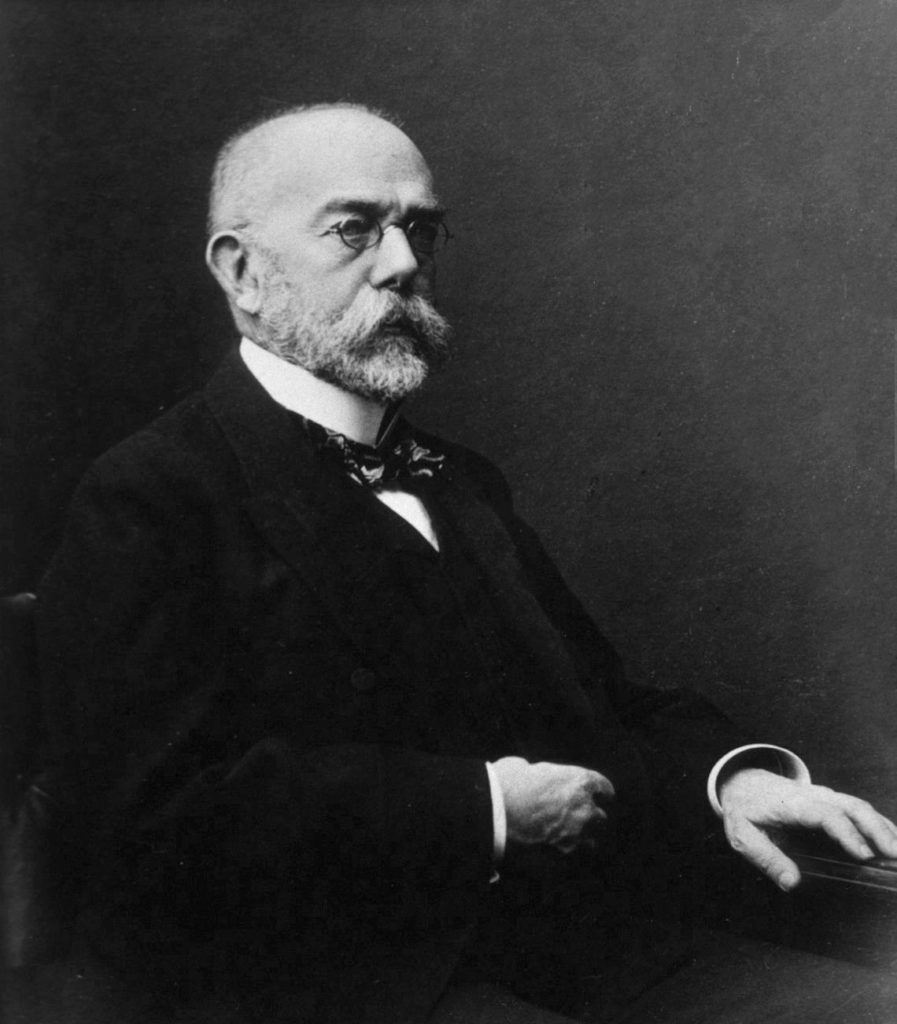 Dr Robert Koch is widely known for developing the four basic criteria to demonstrate that a disease is caused by a particular organism. Koch states that: