Do you want to save dozens of hours in time? Get your evenings and weekends back? Be able to teach Medicine Through Time to your students? 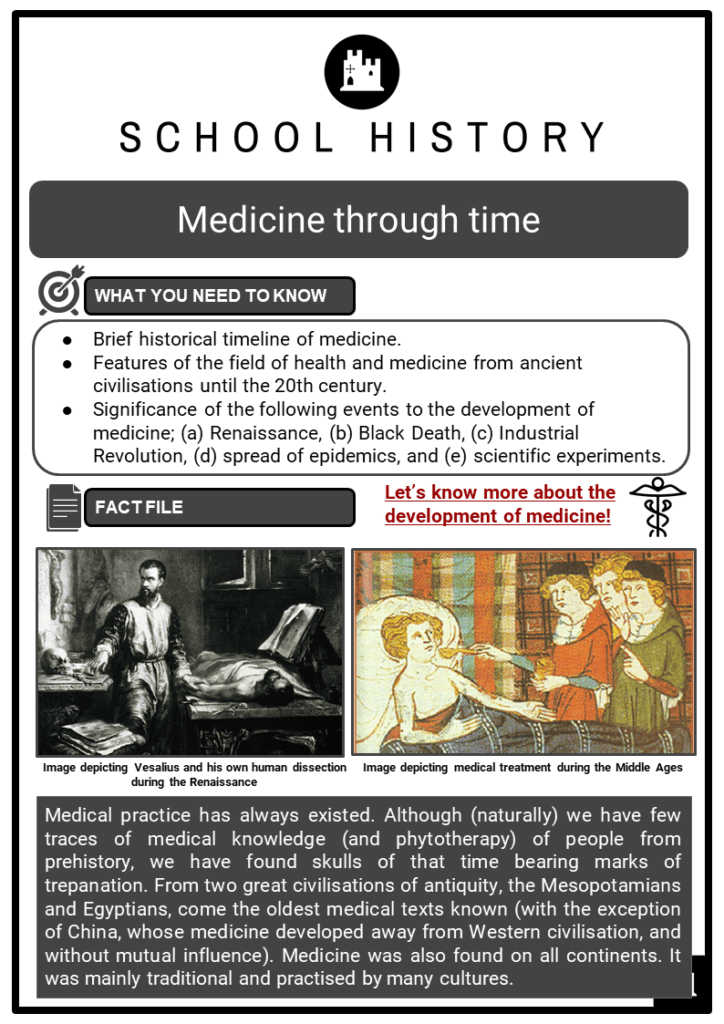 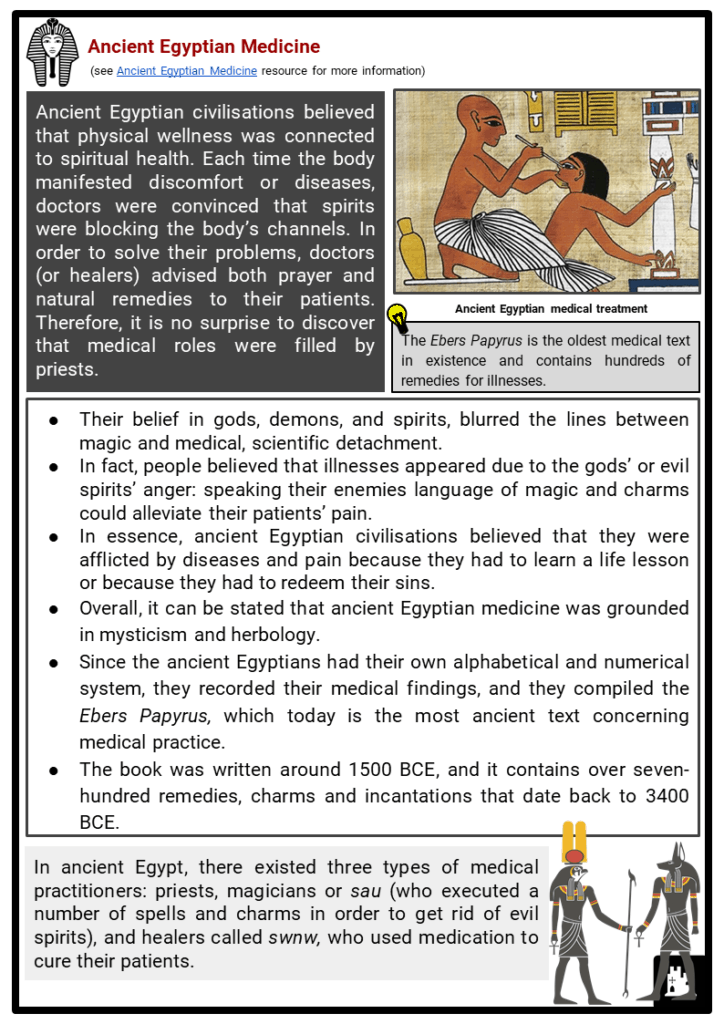 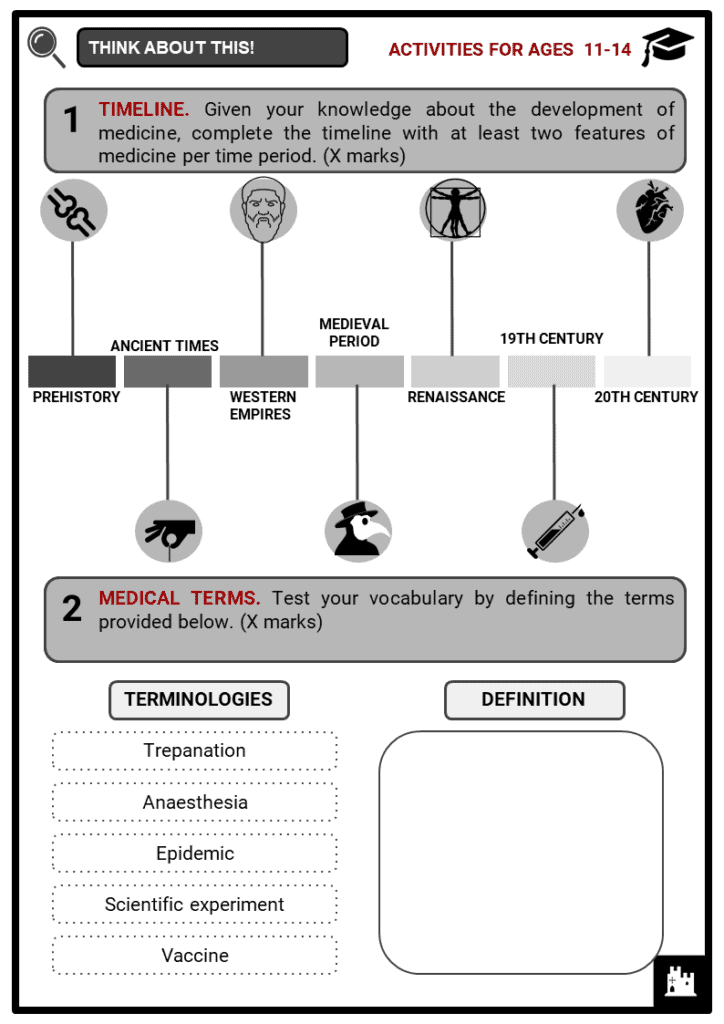 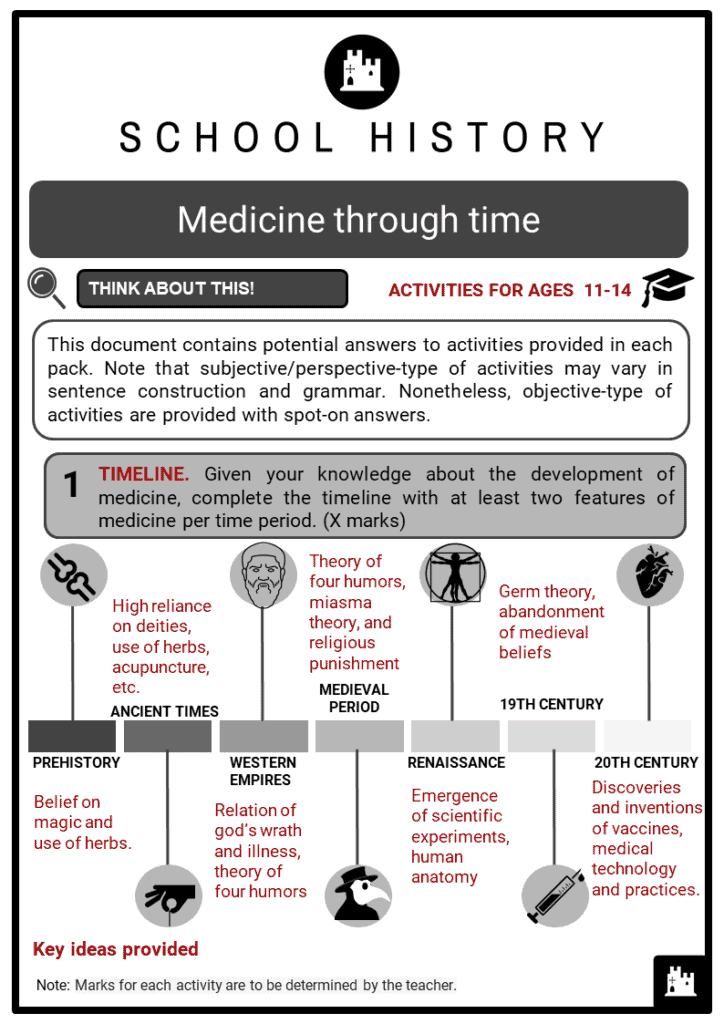 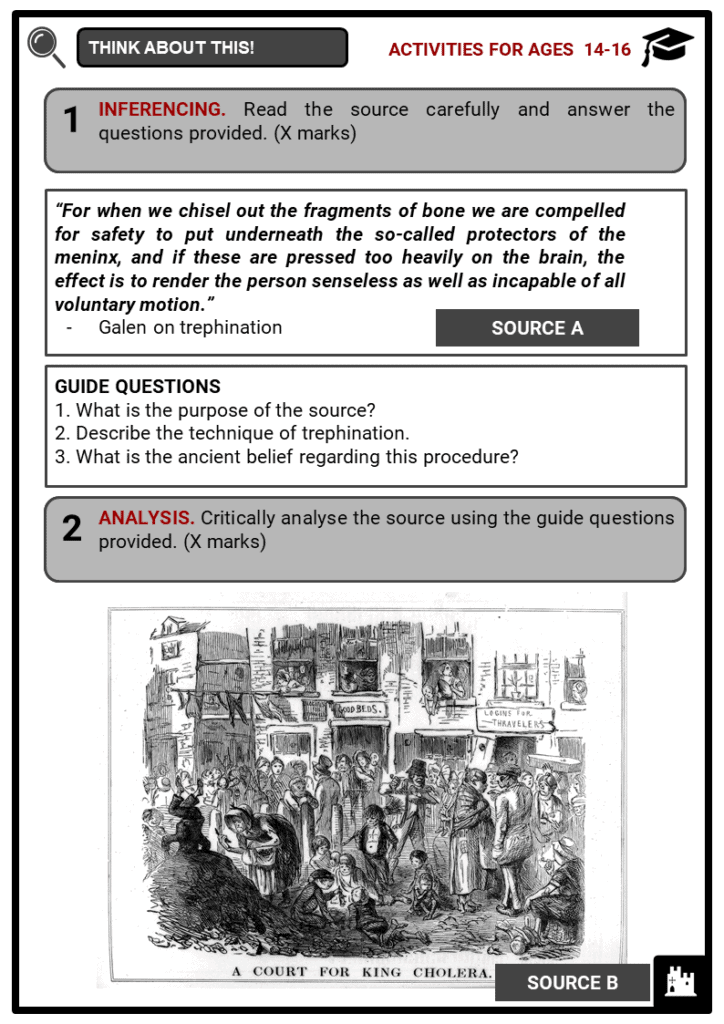 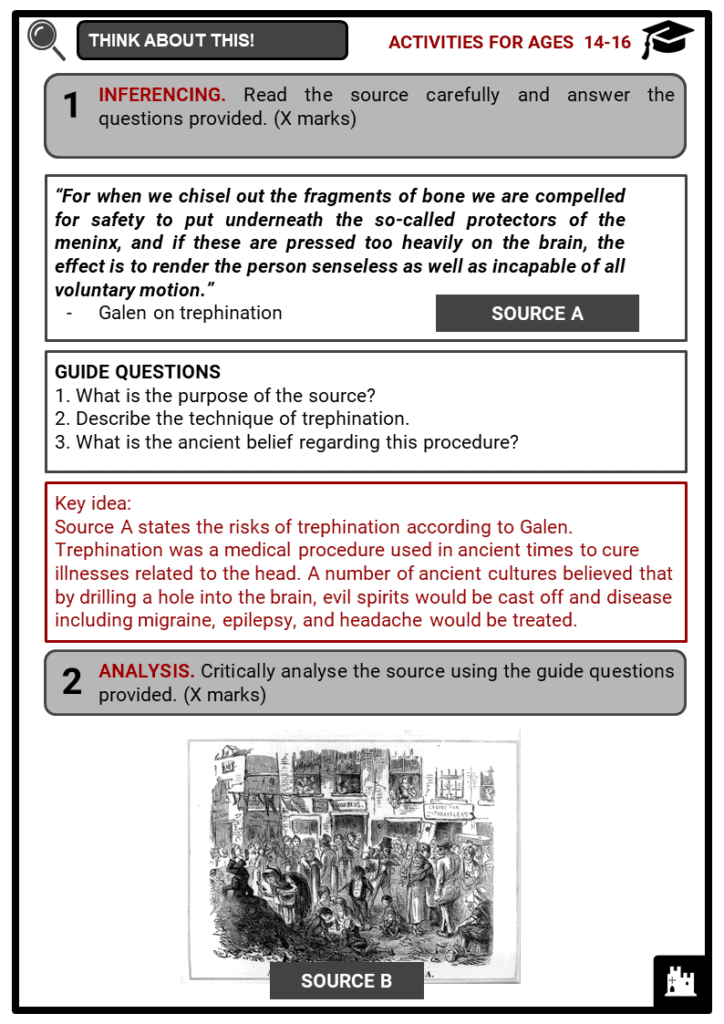 Medical practice has always existed: although we have naturally few traces of medical knowledge (and phytotherapies) of men from prehistory, we have found skulls of that time bearing marks of trepanation. From two great civilizations of antiquity, the Mesopotamia and Egypt, come to the oldest medical texts known (with the exception, of course, of China, whose medicine developed away from Western civilization, and without mutual influence). Medicine was also found on all continents. It was mainly traditional and was always practised by many cultures, for example in Africa or Asia.

In the time of Hippocrates

Western medicine, which is the subject of our discussion, finds its true point of departure in ancient Greece (regardless of the influence of the aforementioned cultures, especially Egyptian). Indeed, it was at this point that the rational concepts that were to define thought and practice were developed in Europe for over two thousand years.

Certainly, in ancient Greek, traditional medicine continued. The gods were believed to be the ones who sometimes caused the diseases and could cure them. Asclepios (known as the name of Aesculapius at Rome), son of Apollo and a mortal, a pupil of the centaur Chiron, became the god of medicine. To defeat diseases, one could use amulets and incantations. One could also go to temples in which dreams were interpreted.

The diseases were from that moment attributed to natural causes, without the intervention of magic and the divine. The approach of the patient was clinical, it was done at the bedside: observation was essential, as was the use of reason, which allowed the doctor to make a prognosis for the outcome of the disease.

The first traces of acupuncture (from the Latin "acts", needle, and "puncture", sting) date back to the Stone Age. But it is in the oldest treatise of Chinese medicine, the "Nei Jing", written partly four thousand years ago, that this method is theorized.

Exported throughout Asia, then introduced in Europe in the seventeenth century by the Jesuits, it was practiced at the time by famous French doctors like Laennec, Trousseau or Louis Berlioz (the father of the composer), then spreads to some city practitioners in the 1920s.

Since then, it has grown in popularity. There are today in France more than 600 specialized doctors. In the United States, the practice of acupuncture dates from the 1960s, during which time Mao Zedong tried, in vain, to banish it from China.

At the base of acupuncture was the combination of yin (feminine interiority) and yang (masculine action), which dominated Chinese philosophy and medicine. Any disturbance of the equilibrium between these two components disturbed the good circulation of qi, the vital energy. Seeking the level at which energy was blocked, the acupuncturist stimulated one or more points of the body with her needles to release it.

While there is still no scientific explanation for the effects of acupuncture, several clinical trials have proven effective in the treatment of low back pain, migraines, elbow tendonitis, and knee osteoarthritis. In addition, medical imaging indicates that solicitation of specific body points leads to specific brain stimulations.

The oldest textbook of surgery was the "Sushruta Samhita", which recorded the interventions of Sushruta, a Hindu doctor of the sixth century BC and the father of this practice. He invented the removal of the prostate, the treatment of ocular cataracts, the drainage of abscesses or a technique of nasal reconstruction (at the time, the nose of criminals was cut off) consisting of taking skin on the forehead of the prostate patient.

In Europe, the surgery appeared much later thanks to Abulcasis, an Andalusian doctor who combined Arab and Greek knowledge. His students and his patients came from all over the West. Another legendary scholar, Ambroise Paré, long misleadingly celebrated in textbooks as the first surgeon, invented in 1546 the ligature of blood vessels.

But it was not until the discovery of antiseptics by the Englishman Joseph Lister in 1867 that modern surgery developed. The postoperative mortality rate dropped dramatically, from 50 to 10% in a few years.

It is to the English doctor Edward Jenner (1749-1823) that we owe the first real vaccination. At the time, doctors in the Arab world already knew that smallpox could be protected from healthy individuals by inoculating the pustules of patients who were recovering. But this practice, common in Turkey before being adopted in Europe, was dangerous (many subjects succumbed to the operation).

Jenner had observed that a cattle disease close to smallpox, the cow-pox, or vaccinia (from the Latin "Vacca", the cow), transmissible to man but causing only mild skin lesions. , protected against true smallpox. He inoculated on May 14, 1796, the young James Phipps a pustule "bovine" taken from a farmer with cow-pox.

Subsequently, the young man was deliberately infected with variola pustules and survived the experiment. "Variolation" (a term quickly replaced by "vaccination") had just demonstrated its usefulness in the field of public health. It became widespread as soon as Jenner published the results of his experiment in 1798.

Napoleon submitted his soldiers there and even vaccinated his son, the King of Rome. Since then, the discovery of other vaccines has continued to accelerate. There are seven in the nineteenth century (including those against rabies, cholera, and diphtheria), five between 1900 and 1950 (including BCG against tuberculosis and influenza vaccine), and seventeen since (against chickenpox, meningitis, hepatitis A and B ...). The most recent (2006) is the HPV vaccine, which is responsible for sexually transmitted infections.

On November 8, 1895, the German physicist Wilhelm Conrad von Röntgen worked in his laboratory on cathode rays, highlighted recently, using a light tube. While observing the action of the tube on a cardboard screen coated with a phosphorescent substance, he found that by applying a strong voltage across the tube, the card illuminates.

Now he knows that the cathode rays could not get out of the tube. He then places a thin sheet between the tube and the screen: the luminescence persists. Röntgen realizes that he is in the presence of an unknown, invisible and penetrating radiation.

Instinctively, he put his arm between the tube and the screen and, stunned, he sees his bones appear on the screen! The scientist comes to both discover X-rays and find them an application, radiology. His wife's hand is used to make the first X-ray. This discovery makes a quick tour of the earth. Everyone wants to "photograph" their skeleton, which will cause many cancers before reducing the dose administered to patients.

Today, X-rays are still used for medical examinations. But they are also used to examine the contents of luggage, the analysis of textile fibers or the identification of crystals.

Blood transfusion dates back to antiquity since descriptions have been found in Roman treatises on medicine. Some chroniclers also claim that in 1492 doctors tried to transfuse the seriously ill Pope Innocent VIII with the blood of three boys.

The pope would be dead three days later, along with the three children. In 1667, Jean-Baptiste Denis, a French doctor, performed the first authenticated transfusion, injecting sheep blood into a 15-year-old man. Again, failure. The authorities, therefore, prohibit this practice; considered too dangerous.

It was not until the nineteenth century that some scientists stressed the need to use human and non-animal blood, and 1901 for Austrian biologist and physician Karl Landsteiner to discover the existence of blood groups and thus safely render blood transfusion.

Realizing that some people's serum agglutinates other people's red blood cells, he identifies four groups, A, B, O, and AB, that determine compatibility between donors and recipients. In 1940, the rhesus group system (from the name of the monkey used for the experiments) positive or negative will complete this capital discovery.

On December 3, 1967, for the first time, a heart was removed from the chest of one human being to be transplanted into another's chest. The operation, performed by the South African surgeon Christiaan Barnard, then raises considerable emotion and moral and ethical controversy.

But it paved the way for major advances in the areas of surgery and the control of graft rejection. Aged 55, the patient, who receives the heart of a girl who died in a car accident, survives only eighteen days before succumbing to double pneumonia against which her weakened immune defenses could not fight. Barnard makes another attempt a month later on a 58-year-old dentist. New death by graft rejection, but after eighteen months.

So we can talk about success, and all the world's cardiac surgery teams are going down the path. Professor Christian Cabrol thus performs the first transplant of the French heart on April 27, 1968. However, his patient dies two days later. Subsequently, thanks to better anti-rejection drugs such as ciclosporin, transplant patients survive longer and longer, up to 20 years for many of them.

In France, there are now about 350 heart transplants per year, with a ten-year survival rate of up to 65%. Only thorny problem: the shortage of organs. All transplants combined, the waiting list (12,000 people) is three times greater than the annual number of interventions.