Do you want to save dozens of hours in time? Get your evenings and weekends back? Be able to teach Plains Indians Way of Life to your students? 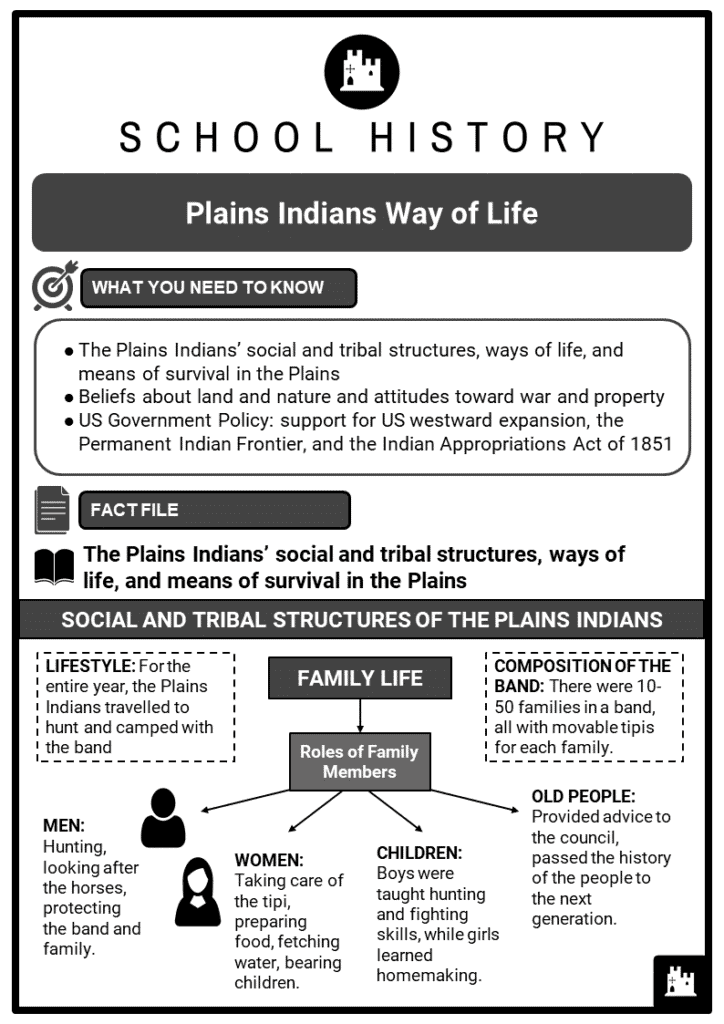 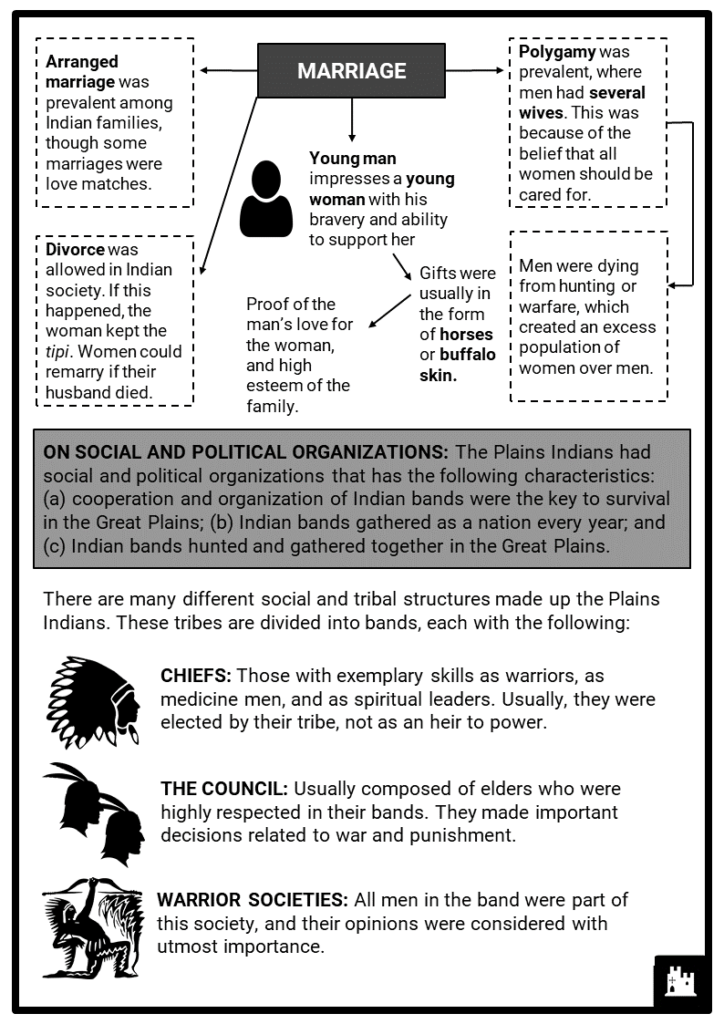 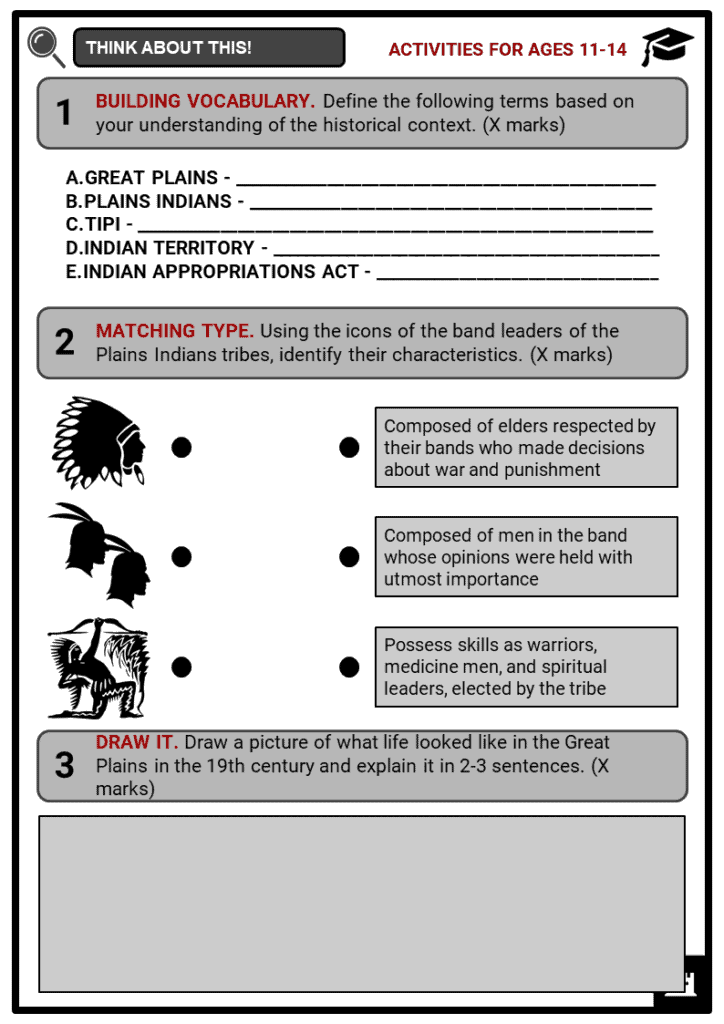 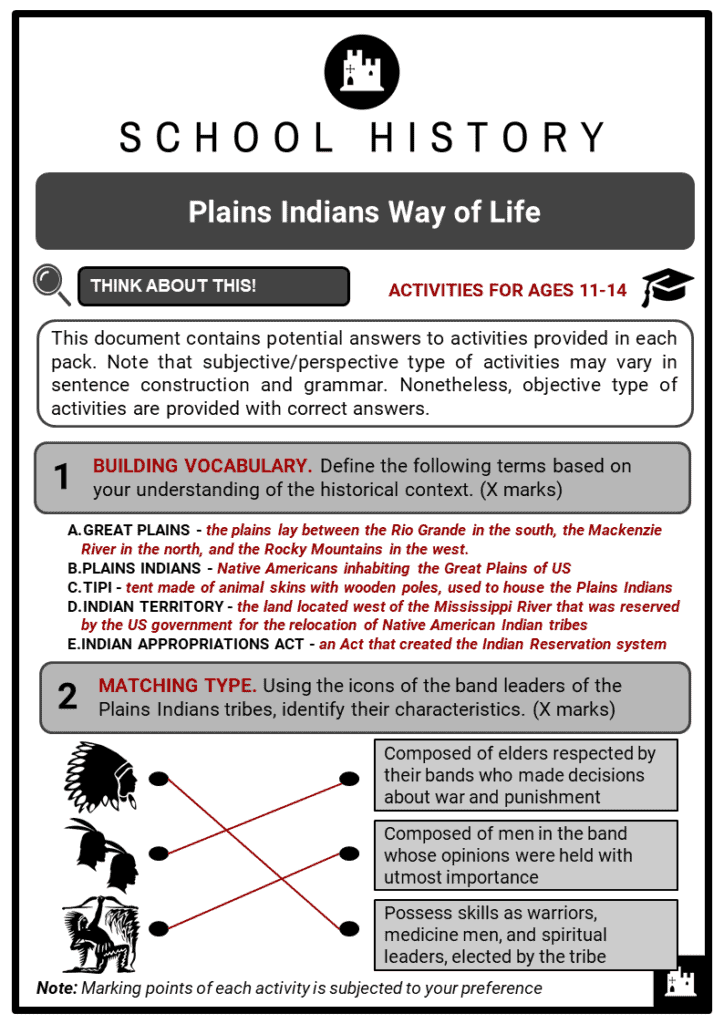 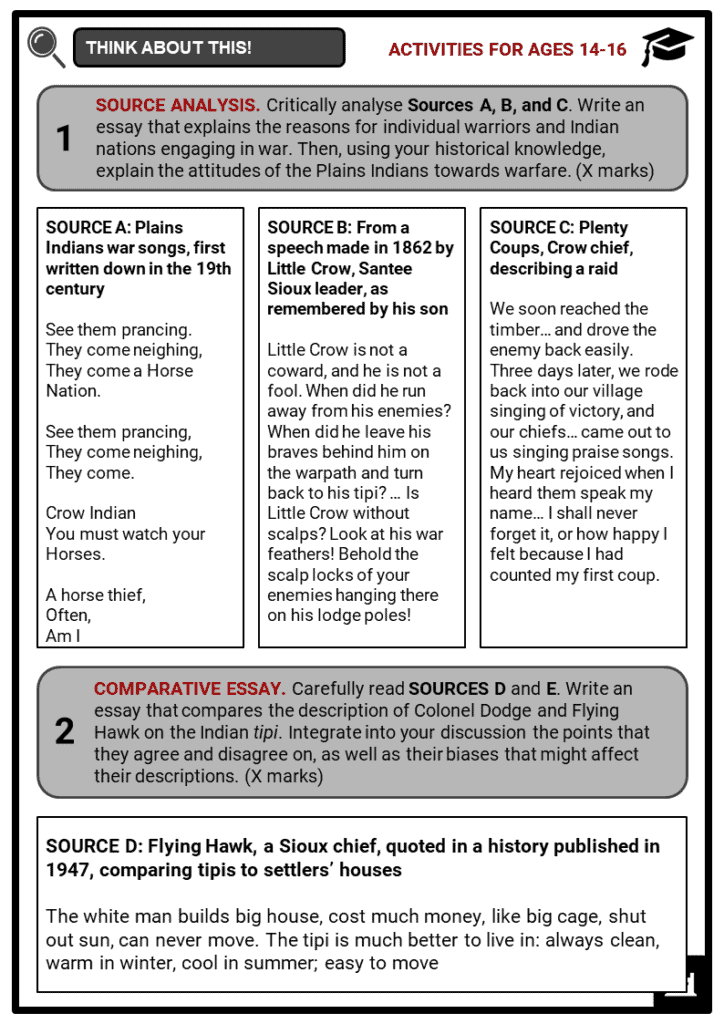 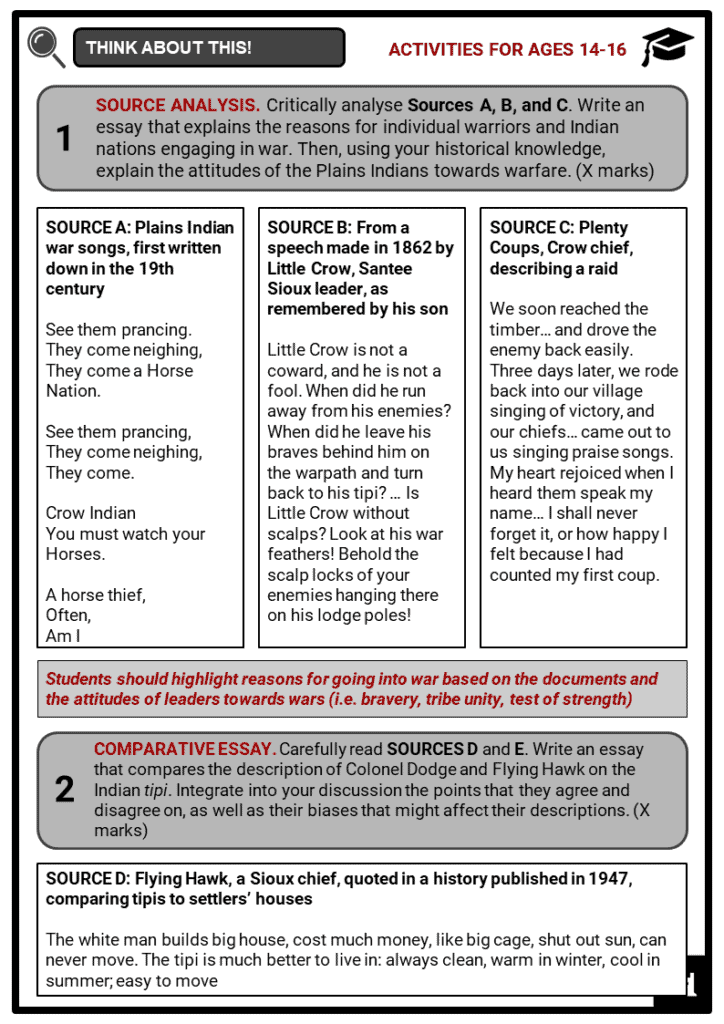 Domestic and Economic Activities of the Plains Indians

The Indigenous people living in the Great Plains of the present-day United States and three provinces in Canada were the Plains Indians. Their lifestyle was predominantly nomadic and semi-nomadic depending on the climatic conditions, land and natural resources available. There were six distinct language groups spoken by over twenty tribes of the Plains Indians, which were Algonquian, Siouan, Uto-Aztecan, Caddoan, and Athabaskan.

They used teepees, cone-shaped structures made from wooden poles and buffalo hide. The teepees were easy to pack up when they needed to move following the buffalo migration through the annual seasons. The semi-sedentary Indians used teepees but kept permanent villages beside the rivers.

They had dark brown eyes, prominent cheekbones, straight black hear and a scanty beard. They had varying shades of skin colour with very light as seen among the Cheyenne to dark as among the Caddo. For jewellery, most preferred the bear claw neckless, noting the significance of the animals to the community, they wore the neckless with a sense of meaning. They adorned themselves with hides with distinguishing tastes across the groups. For instance, the Sioux wore leather attires with fringes, colourful beads and were known to fasten eagle feather headdresses at the crown of their heads. The Sioux also favoured ponchos and vest jackets decorated with beads.

They respected their old, believing that the experience that came with age brought a lot of wisdom. Children were loved by all and received care and instruction from an older person. They also valued their women, who engaged in artwork and seen as the backbone of the family unit. The Plains Indians eat from the animals availed after hunting including buffalo, wild turkey, dear and bear either cooked, boiled or dried. They were experts in identify notorious roots as food supplements and herbal medicine for the sick. They also eat vegetables including spinach and fruits such as wild berries.

Plains Indians were also fierce warriors. The Sioux tribe is considered the most violent of all the tribes, and they were most resistant to the European invasion of their land. In warfare, the Plains Indians warriors would cut off the scalps of their dead enemies to achieve honour. At times, they would tap an enemy with a stick in battle, rather than kill. A strategy they called ‘counting coup. For the Cheyenne, believed in magical waters that would protect them from the bullets of the white men. Such simple believes cost them a great deal during the Plains Indians Wars.

The Sioux and the Blackfoot put up the most robust resistance against the encroachment of the Europeans, and it almost led to the extinction of the former tribe.  Further, they engaged in war as a sport, and through communal raids, the war was a way to increase the wealth of the groups and enhance reputation.

The Plains Indians ways of life and means of survival

THE IMPORTANCE OF HORSES: The first horses were brought to America by the Spanish colonists during the 16th century. In 1640, the Pueblo Indians of Mexico captured these horses from the Spaniards and took care of them through breeding and trading with other Indian nations.
Indians saw horses as a way for them to survive in the Plains. They were used during warfare.
Social status and wealth were determined by the number of horses that a person or tribe had.
Indians would ride horses to hunt for buffalo.
Horses served as a mode of transportation to various places in the Plains since they were nomadic people.

THE IMPORTANCE OF BUFFALO: Buffalo were hunted for living and survival, not farmed or bred. Before hunting, the Plains Indians performed several days of dance rituals by dressing like a buffalo and copying their movements to help them hunt more buffalo along their journey.
Parts of the buffalo were used for food, clothing, and equipment for tipis.
The heart of a buffalo was left in the Plains, following the belief that it would give a new life to a herd.

After the hunt, women and children prepared the carcass for eating raw or cooked.
Jerky from the buffalo meat was stored for consuming during the winter season.

The uses of the buffalo for the Plains Indians

Political Organization of the Plains Indians

The Plains Indians had a democratic culture among them and encouraged the participation and cooperation all for the prosperity of the tribe. Leadership was usually hereditary, with a requirement of demonstration of strength, courage, wisdom, and generosity. They had a dominating male culture. The Chief was a tribal leader, decision-maker and spokesperson of the community to the outsiders. Most of the Plains Indians groups had sub-formations within them with strategic tasks for their prosperity.

The Sioux, for example, had two sets of sub-formations the Naca ominicia for tribal leaders, former leaders, the elders, and the Akicita for the young men. The Naca elected seven men from among themselves called the Wicasa Itacans responsible for interpretation of Naca decisions and fostering compliance of the community to their choices. The Cheyenne had four chiefs of equal rank and an elected council of forty that oversaw and advised the Chiefs. The Blackfoot had clan leaders who followed the leadership of the Chief.

For maintaining daily order, the Wicasa of the Sioux further elected two Shirt Wearers whose role was to be the voice of the Wicasa and were required to concern themselves with the welfare of the community. Similar structures were among the Cheyenne, Arapaho, Crow, Assiniboine, Hidatsa, Pawnee, Mandan, and Arikara.

Religious Activities of the Plains Indians

The Plains Indians are a deeply spiritual community. Their religious beliefs and ceremonies were based on animals and celestial objects. Their central beliefs were that all natural objects and phenomenon including caves, rivers, mountains, and storms have souls and spirits as human beings.

They also believed in the one Great Spirit, Wakan Tanka in Sioux language, the mother of all spirits wielding power over everything on earth. The  Great Spirit choose people and confirmed them through great signs, who exercised the power of the Spirit by healing people, among other miracles. They also had a pipe known as the medicine pipe, used for ceremonial smoking a token of peace.

All the Plains Indians tribes with minor variations practised the Sun Dance ceremony. The ceremony including singing, praying, drumming, dancing, fasting and in select tribes, piercing of the chest and back. During the ceremony, there were those who experienced visions from the Great Spirits, giving instructions that would lead to the prosperity of the individual or community.

The Ghost dance, a religious movement led by the prophet of peace Jack Wilson known by the Natives as Wovoka, was also central to the religious expression of the Plains Indians. The movement emphasized peace, honest living and a peaceful existence among the Native tribes. The Dance is a desperate plea to the Great Spirit to intervene in the affairs of a community whose cultural structure stands destroyed. Wovoka had also prophesized a peaceful end to the bloody confrontation between the Indians, settlers and the federal government. The end would come with a return of the dead (hence ghost), the ousting of the whites, and restoration of the Indian land and culture.

The Plains Indians were good artists. They made different art forms using materials that were available naturally. Women also engaged in the art of beadwork on garments with was a preserve of the women. Men were carvers and would carve pipes out of wood that with decorations, which ceremoniously smoked when peace truce was reached.

They also made paints from berry juice and other plants and made varying shades of colour from bright yellow, red and dull shades of white. They made paintings depicting scenes of battle, hunts, and warriors shooting arrows and riding horses. They designed shapes using porcupine quills.

Contemporary Plains Indians still struggle to secure justice for the historical injustices they suffered. In both the U.S and Canada, the Natives have engaged in long-drawn legal battles for recognition by the federal government and First Nation status respectively. They have fought to maintain constitutional rights to their land, with some of the 19th-century treaties were used in the United States cases concerning the recognition of Native Americans, compensation and legal rights to the property. Contemporary Indians have entirely lost some aspects of their culture to connect to the area. Many presently engage in agriculture, casinos, and artworks.

In the United States, they organize events to celebrate their heritage. Expression through art is still widespread among Indians. Contemporary artists, use their creativity to tell their history from the proper perspective and to highlight the historical injustices suffered by their ancestors as a form of advocacy.