Prisons in the Mid to Late 19th Century

Download Prisons in the Mid to Late 19th Century 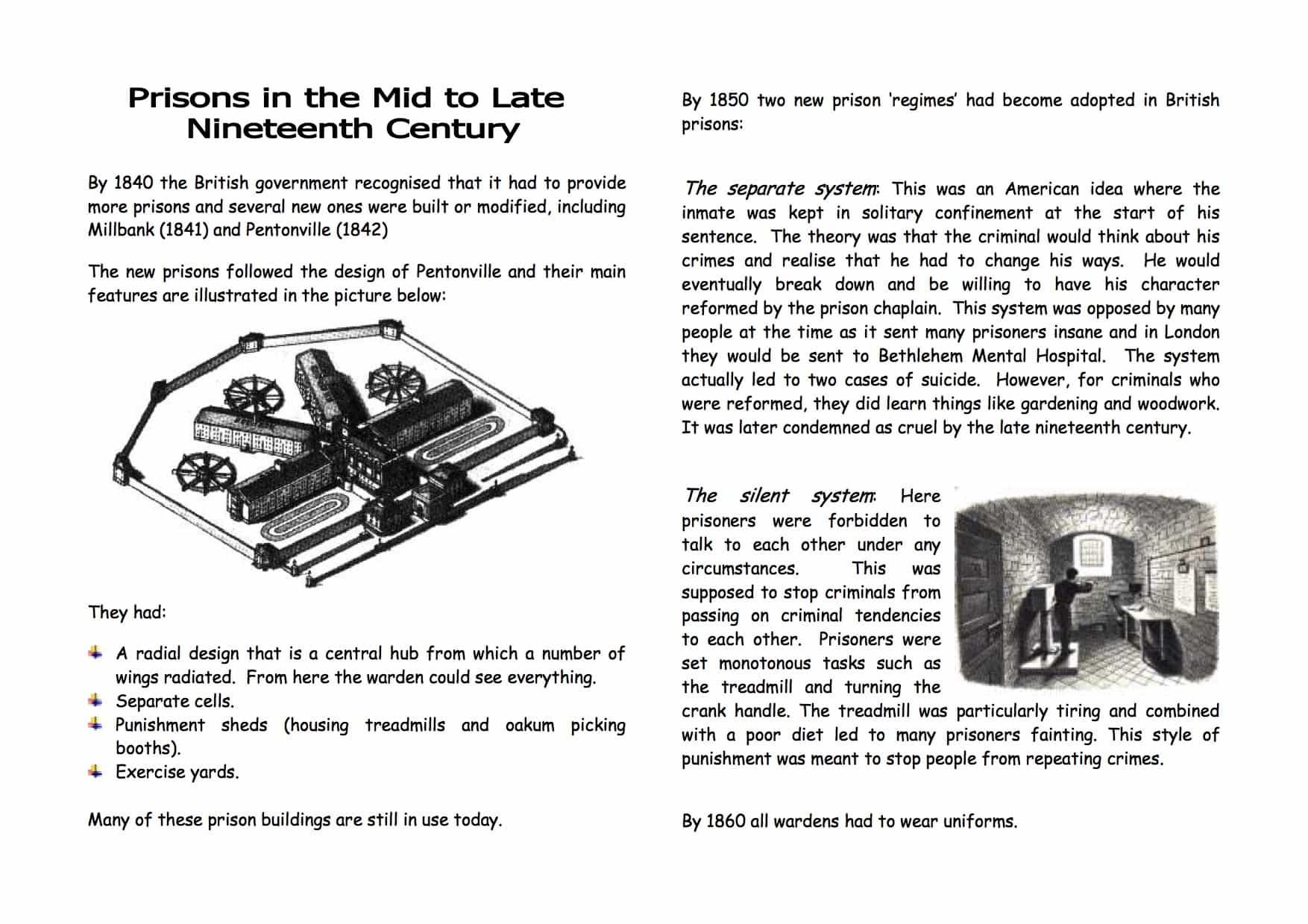 By 1840 the British government recognised that it had to provide more prisons and several new ones were built or modified, including Millbank (1841) and Pentonville (1842)

Many of these prison buildings are still in use today.

The separate system:
This was an American idea where the inmate was kept in solitary confinement at the start of his sentence. The theory was that the criminal would think about his crimes and realise that he had to change his ways. He would eventually break down and be willing to have his character reformed by the prison chaplain. This system was opposed by many people at the time as it sent many prisoners insane and in London they would be sent to Bethlehem Mental Hospital. The system actually led to two cases of suicide. However, for criminals who were reformed, they did learn things like gardening and woodwork. It was later condemned as cruel by the late nineteenth century.

Here prisoners were forbidden to talk to each other under any circumstances. This was supposed to stop criminals from passing on criminal tendencies to each other. Prisoners were set monotonous tasks such as the treadmill and turning the crank handle. The treadmill was particularly tiring and combined with a poor diet led to many prisoners fainting. This style of punishment was meant to stop people from repeating crimes.

By 1860 all wardens had to wear uniforms.

In 1853 the Home Secretary, Lord Palmerston, passed the Penal Servitude Act. With the end of transportation, in 1852, Britain had a problem in accommodating all of the convicts in British prisons. The Act

Many people disliked this Act because they felt that it was too lenient. They wanted prisoners to be subjected to hard work during their sentences.

In 1854 Lord Shaftesbury established the Prisoners’ Aid Society which aimed to lend support to prisoners on their release. He also supported Palmerston in setting up Reform Schools for young offenders to protect them from the harsh primitive regime of the prisons.

In 1877 the Prisons Act put all British prisons under the direct control of the Home Secretary.

By 1900 it would be safe to say that the ‘modern’ system of imprisonment had been established.