Do you want to save dozens of hours in time? Get your evenings and weekends back? Be able to teach Renaissance Medicine to your students? 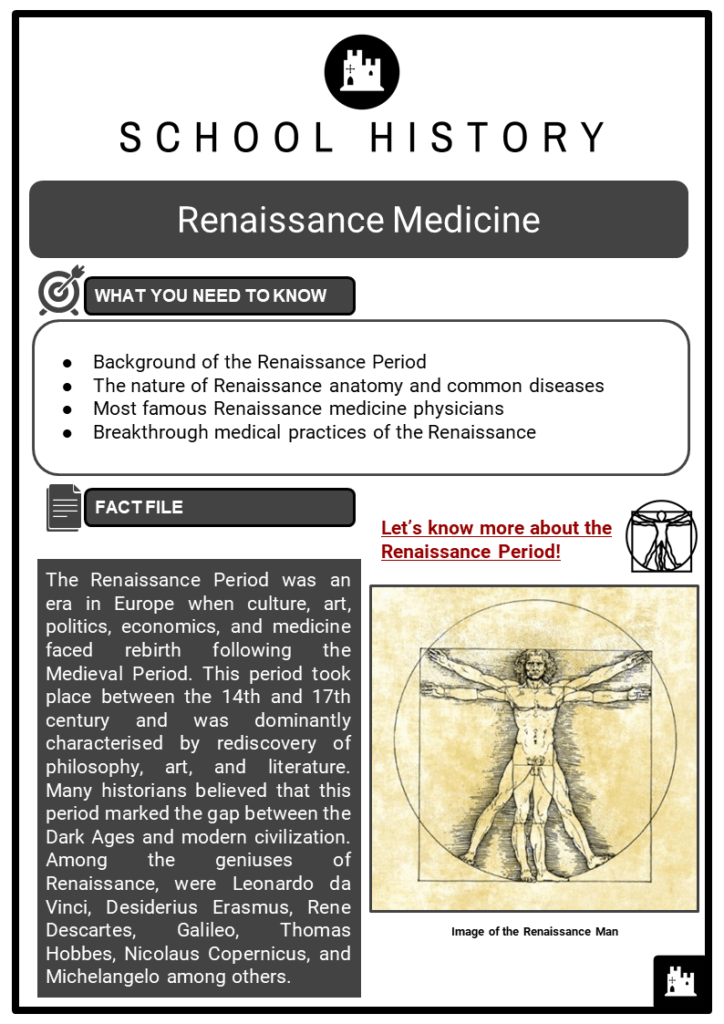 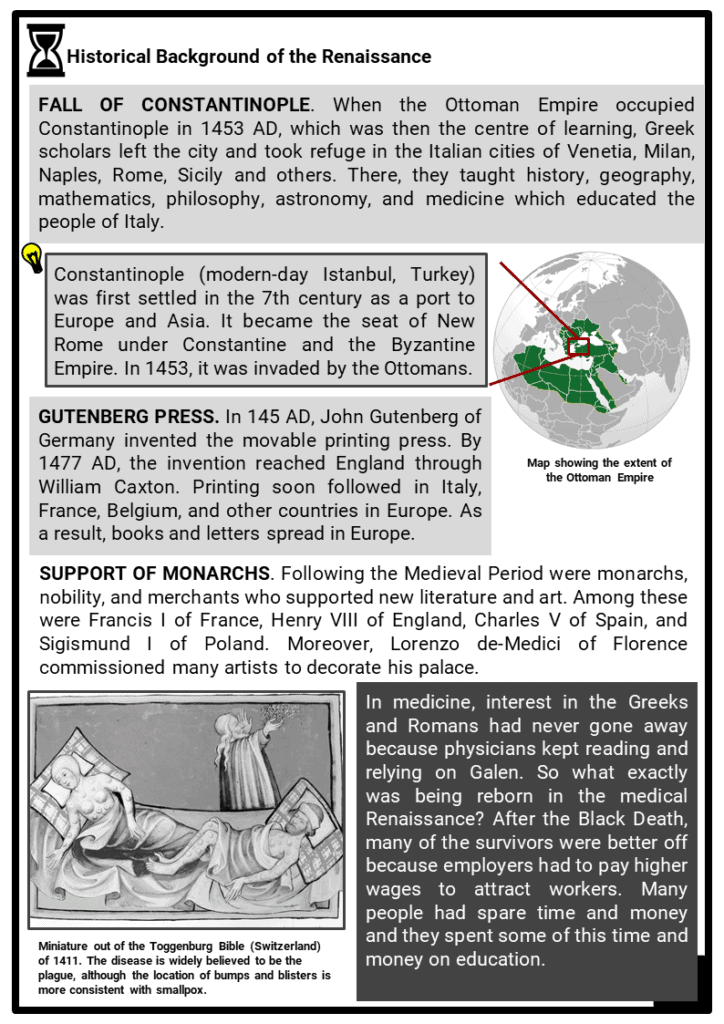 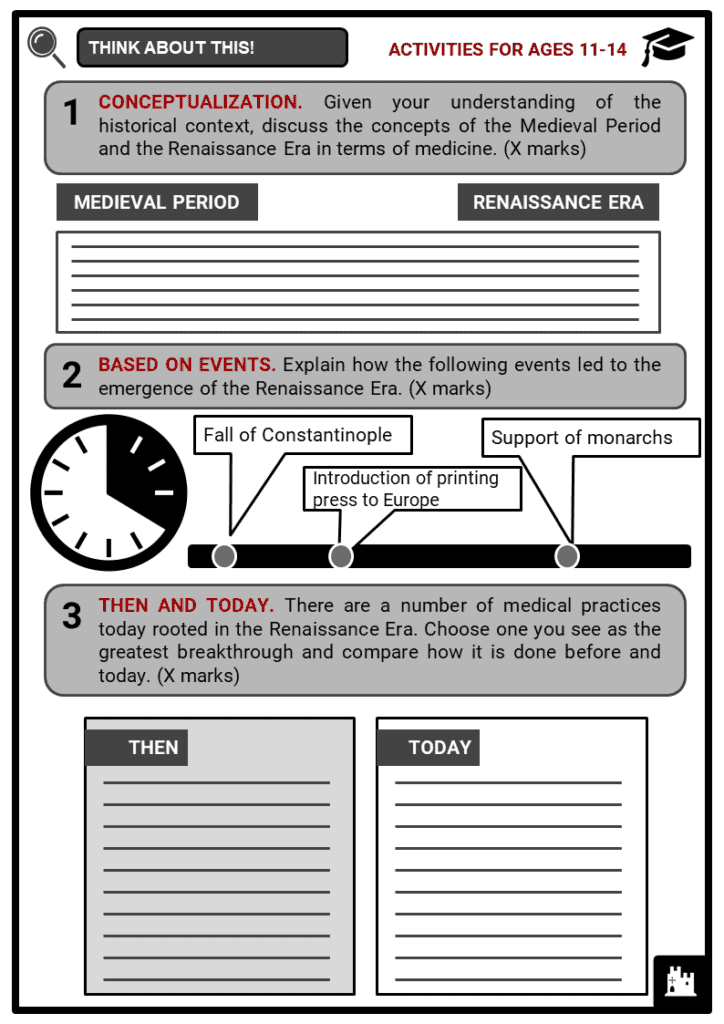 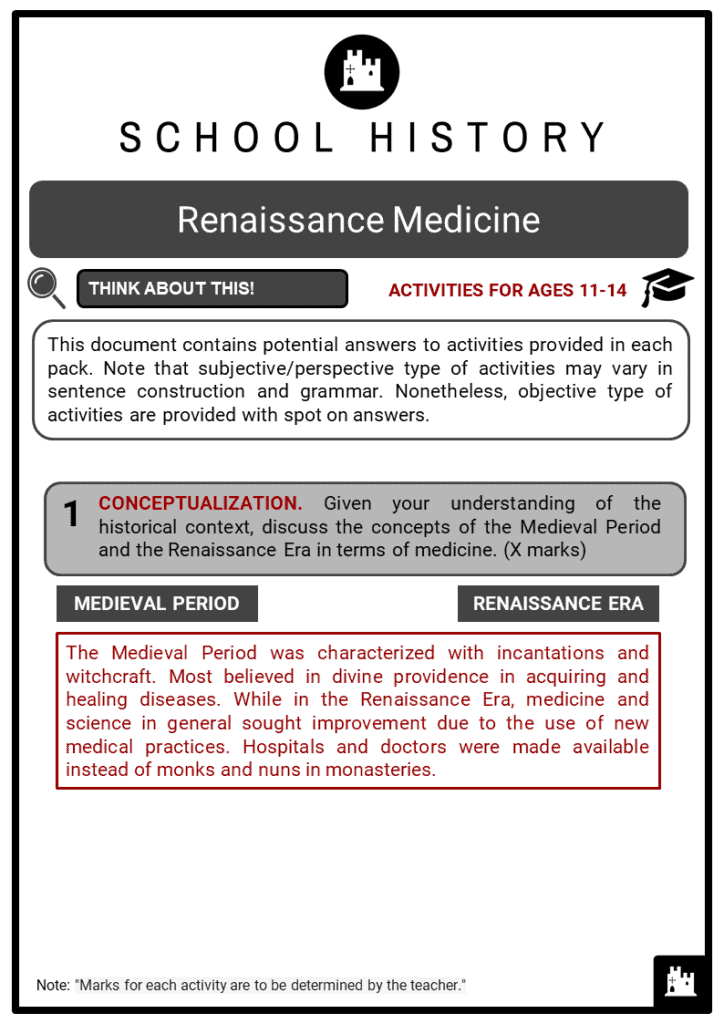 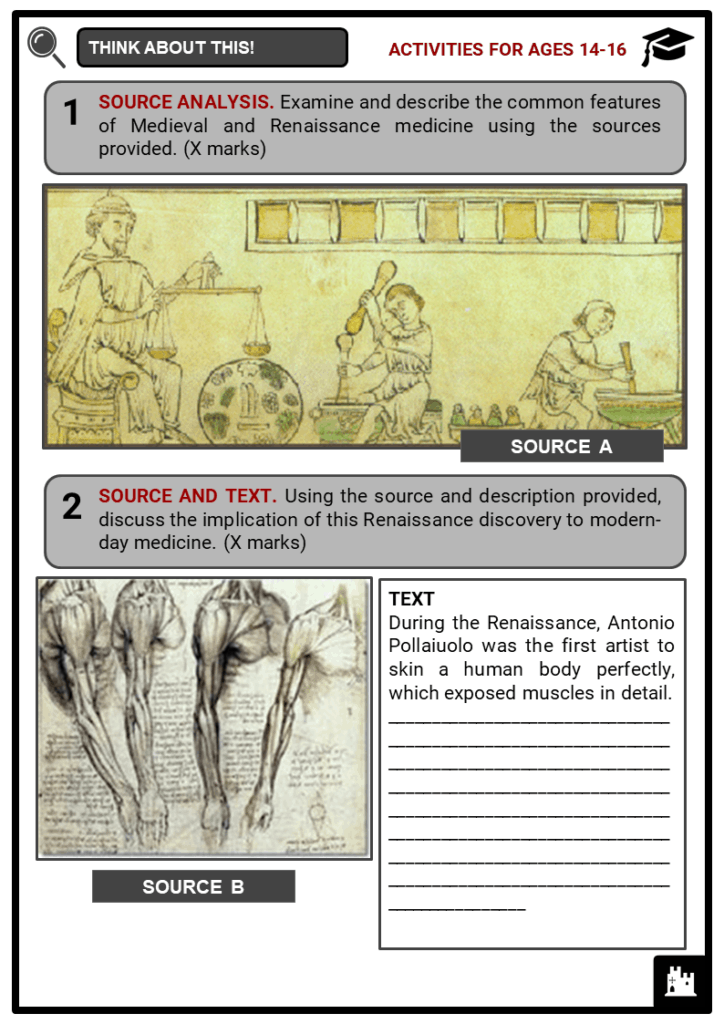 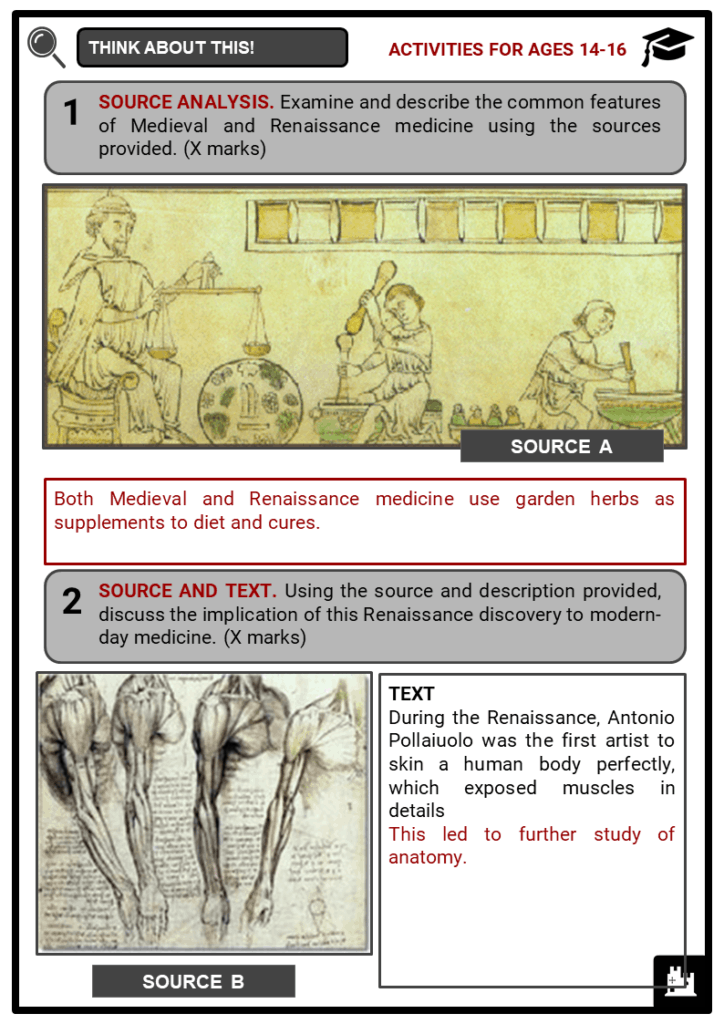 The Renaissance period was the Age of Discovery. During this period, many discoveries were made. Before the Renaissance period, which is before the 1450s, medicine was largely based on theories. There was little research into what medical practices and cures actually worked.

From the 1450s onwards, there was a shift in medicine towards a more scientific approach. This was known as Renaissance medicine. It was aided by discoveries made by various Renaissance artists in anatomy. This led to improved surgical procedures and the discovery of new medicines as physicians abandoned alchemy and superstition.

Reasons for the Renaissance

Renaissance means rebirth. In general, the Renaissance period was a time of interest in all things Greek and Roman, their books and ideas, buildings and sculptures. But in medicine, interest in the Greeks and Romans had never gone away because physicians had kept reading and relying on Galen. So what exactly was being reborn in the medical Renaissance?

After the Black Death, many of the survivors were better off because employers had to pay higher wages to attract workers. Many people had spare time, and spare money and they spent some of this time and money on education.

Wealth and education helped trigger the Renaissance. Educated people during the Renaissance thought that the Greeks and Romans were just like them – intelligent and thoughtful. They looked down on the people of the Middle Ages as ignorant.

So what was reborn? It was not just interest in Greek and Roman ideas that were reborn but, far more importantly, their love of inquiry and willingness to challenge existing ideas. Once they began to ask questions and look carefully some began to realize that Galen had not known everything – and had even made mistakes!

This work changed attitudes. In the Middle Ages, people respected traditional ideas and simply copied Greek knowledge and ideas. They did not challenge them. But in the Renaissance, people realized that the Greeks loved inquiry – asking questions, challenging old ideas (like the gods causing disease) and suggesting new ones (the Theory of the Four Humours).

If the Greeks could ask questions and challenge old ideas, then so could they, the people of the Renaissance. But not everyone agreed. Many people still conservatively stuck to tradition, not daring to think for themselves, still saying it was wrong to challenge Galen. So what developed was a battle of attitudes,  between people defending the old ideas and people fighting for new ones.

The main factor that contributed to Renaissance medicine was increased anatomical knowledge. Societies eased the cultural and legal restrictions that had been put on dissecting cadavers. This allowed physicians to carry out many anatomical studies, making a lot of new discoveries on the human anatomy.

Armed with a much better understanding of the human anatomy, doctors and physicians were able to get rid of old medical techniques that harmed the body rather than cured it. Such harmful medical procedures included bloodletting, which involved the draining of blood from someone’s vein to “rebalance” the body humours.

The Church had previously banned dissection. The church believed that dissecting a cadaver took away the deceased’s dignity since a person deserved to be buried whole.

Knowledge from the Middle East

Another important aspect of Renaissance medicine was the transmission of medical knowledge from the Middle East. Scholars from the Islamic world had made some important advancements in disease and injury treatment. Some of this knowledge was transmitted to Europe during the collapse of the Islamic dominion when some Muslim scholars fled to Europe.

The Crusaders were impressed by the advanced medical techniques that were being used by Islamic doctors to treat diseases. When the Crusaders returned to Europe, they brought this knowledge back home. Physicians in Europe were thus able to scrutinise how the body worked and refine their knowledge of human anatomy.

He was born in Italy and lived from 1478 to 1553. He was the first doctor to suggest that human diseases may be caused by pathogens. He further stated that these pathogens came from outside the body and could be passed from one human to another through direct and indirect contact.

He was a Flemish physician and anatomist who lived from 1514 to 1564. He wrote the book “De Humani Corporis Fabrica”. This became a very important book written on human anatomy. He dissected corpses and examined them, after which he detailed human anatomy.

Born in 1578, William Harvey was a doctor in England. He became the first doctor to ever describe properly how the human circulatory system properly worked. He also described the blood properties and how the heart worked to circulate the blood around the body. He died in 1567.

He was a German doctor who lived from 1493 to 1541. He was also a scholar and an occultist. He was the first person to demonstrate that chemicals and minerals could be safely used in the human body. According to him, diseases and health depended on how a person’s body was in harmony with nature. He also proposed that certain mineral and chemical balances were required for the body to be healthy.

He was born in Italy, lived from 1452 to 1519 and was skilled in many fields, including anatomy. He dissected human corpses to study tendons, bones, and muscles. He was permitted to dissect and study human corpses in some hospitals and created a book with over 100 pages that had notes and illustrations about the anatomy of the human body.

He also studied the human skeletal structure and how the muscles made the bones move. He was one of the pioneers in the study of biomechanics.

He was a doctor from France who lived from 1510 to 1590. He was the father of modern forensic pathology and surgery. He served as the royal surgeon in the Kingdom of France and was an expert in treating soldiers who were wounded on the battlefield. He made several instruments that were used for surgery.

During the Renaissance period, common diseases included leprosy, smallpox and the dangerous and dreaded Black Death. Before explorers from Spain sailed to the Americas, diseases such as measles, smallpox and the deadly influenza were unheard of there. As a result, the American Natives were not immune to such diseases, and they were deadly to them.

University-trained physicians still accepted Hippocrates’ theory that illness was caused by an imbalance in the body’s humour. Their training still concentrated on the writings of Greek doctors, especially Galen, and Arab doctors such as Ibn Sina. They also read the work of Vesalius, Paré, and Harvey, but were often reluctant to accept that Galen might have been wrong.

Like their medieval predecessors, physicians also advised their clients on how to stay healthy through a good diet and exercise. Women still played a major part in everyday medicine. Wealthy ladies often provided care for local families. Women continued to work as midwives, although the first handbooks for midwives were written by men who had little practical experience. The first English handbook by a woman was The Midwives Book by Mrs Jane Sharp in 1671.

However, wealthy patients were becoming less willing to go to women healers and preferred fashionable physicians instead. This was nothing to do with experience or effectiveness but wanting to be seen to be going to the most expensive doctors. Women were still not allowed to go to university so could not match the theoretical knowledge of men, no matter how good their practical skills.[/caption]

Another development which downgraded women’s role was a new invention. About 1620 Peter Chamberlen invented the obstetrical forceps, used to free a baby from the womb during a difficult birth, without hurting or killing baby or mother. Male physicians said that only men should use forceps because only they had been to university to gain anatomical knowledge.

Many home remedies were handed down through generations from mother to daughter. Girls learned how to mix up remedies, using ingredients such as honey, which we now know kills bacteria. More people were writing down home remedies because more people could now read and write.

European travels to America and Asia led to the arrival of new ingredients for medicines. Rhubarb from Asia was widely used to purge the bowels. The bark of the cinchona tree was imported from South America because of its effectiveness in treating fevers. In Europe, it became known as quinine and helped many who suffered from malaria.