The Role of the Press in Crime and Police

Download The Role of the Press in Crime and Police 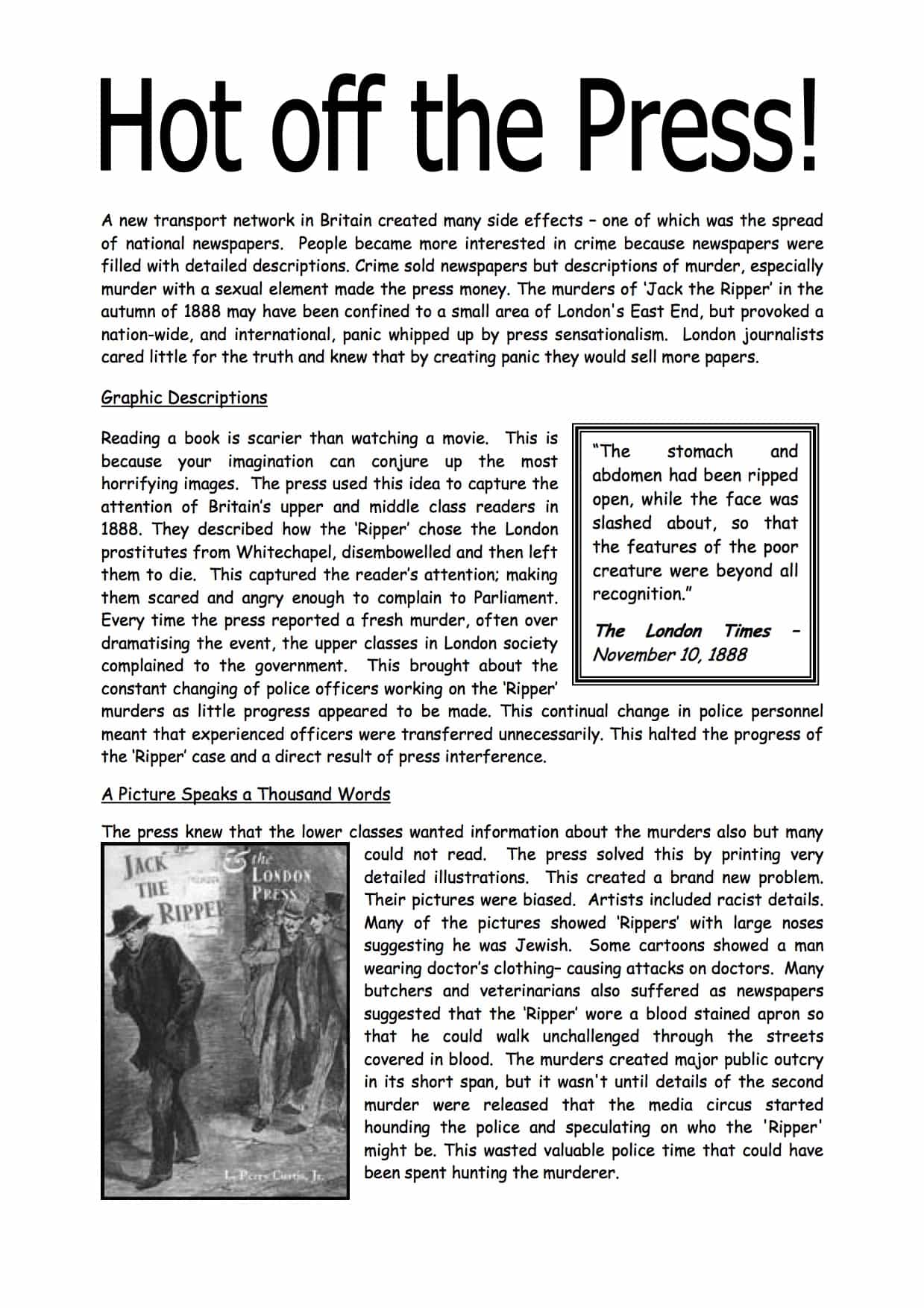 A new transport network in Britain created many side effects – one of which was the spread of national newspapers. People became more interested in crime because newspapers were filled with detailed descriptions. Crime sold newspapers but descriptions of murder, especially murder with a sexual element made the press money. The murders of ‘Jack the Ripper’ in the autumn of 1888 may have been confined to a small area of London’s East End, but provoked a nation-wide, and international, panic whipped up by press sensationalism. London journalists cared little for the truth and knew that by creating panic they would sell more papers.

Reading a book is scarier than watching a movie. This is because your imagination can conjure up the most horrifying images. The press used this idea to capture the
attention of Britain’s upper and middle class readers in 1888. They described how the ‘Ripper’ chose the London prostitutes from Whitechapel, disembowelled and then left
them to die. This captured the reader’s attention; making them scared and angry enough to complain to Parliament. Every time the press reported a fresh murder, often over
dramatising the event, the upper classes in London society complained to the government. This brought about the constant changing of police officers working on the ‘Ripper’
murders as little progress appeared to be made. This continual change in police personnel meant that experienced officers were transferred unnecessarily. This halted the progress of the ‘Ripper’ case and a direct result of press interference.

A Picture Speaks a Thousand Words

The press knew that the lower classes wanted information about the murders also but many could not read. The press solved this by printing very detailed illustrations. This created a brand new problem. Their pictures were biased. Artists included racist details. Many of the pictures showed ‘Rippers’ with large noses suggesting he was Jewish. Some cartoons showed a man wearing doctor’s clothing– causing attacks on doctors. Many butchers and veterinarians also suffered as newspapers suggested that the ‘Ripper’ wore a blood stained apron so that he could walk unchallenged through the streets covered in blood. The murders created major public outcry in its short span, but it wasn’t until details of the second murder were released that the media circus started hounding the police and speculating on who the ‘Ripper’ might be. This wasted valuable police time that could have been spent hunting the murderer.

Things definitely took a turn for the worse when the London press began to receive hundreds of letters from people claiming to be the Whitechapel murderer. The press were positive that most of these letters were fakes and often did not take them seriously. There was one however which people today believe to be a true letter from the ‘Ripper’. The Press received the ‘Dear Boss Letter’ but the editors treated the letter as a hoax and did not send it to the police for a couple of days. The night after the police finally received the letter, Liz Stride and Kate Eddowes were murdered. The presses delay in sending the letter to the police may have prevented the one chance that the Metropolitan Police had to catch the killer. This was to be a costly mistake.

It was in November 1888 that the panic was at its height and the notoriety of the murders was becoming truly international, appearing in newspapers from Europe to the Americas. Even at this early stage the newspapers were carrying theories as to the identity of the killer, including doctors, slaughterers, sailors, and lunatics of every description. What is certain looking back at the press coverage of the ‘Ripper’ murders is the fact that the press coverage of the murders caused far more problems for the police and may have actually helped the ‘Ripper’ to remain free.