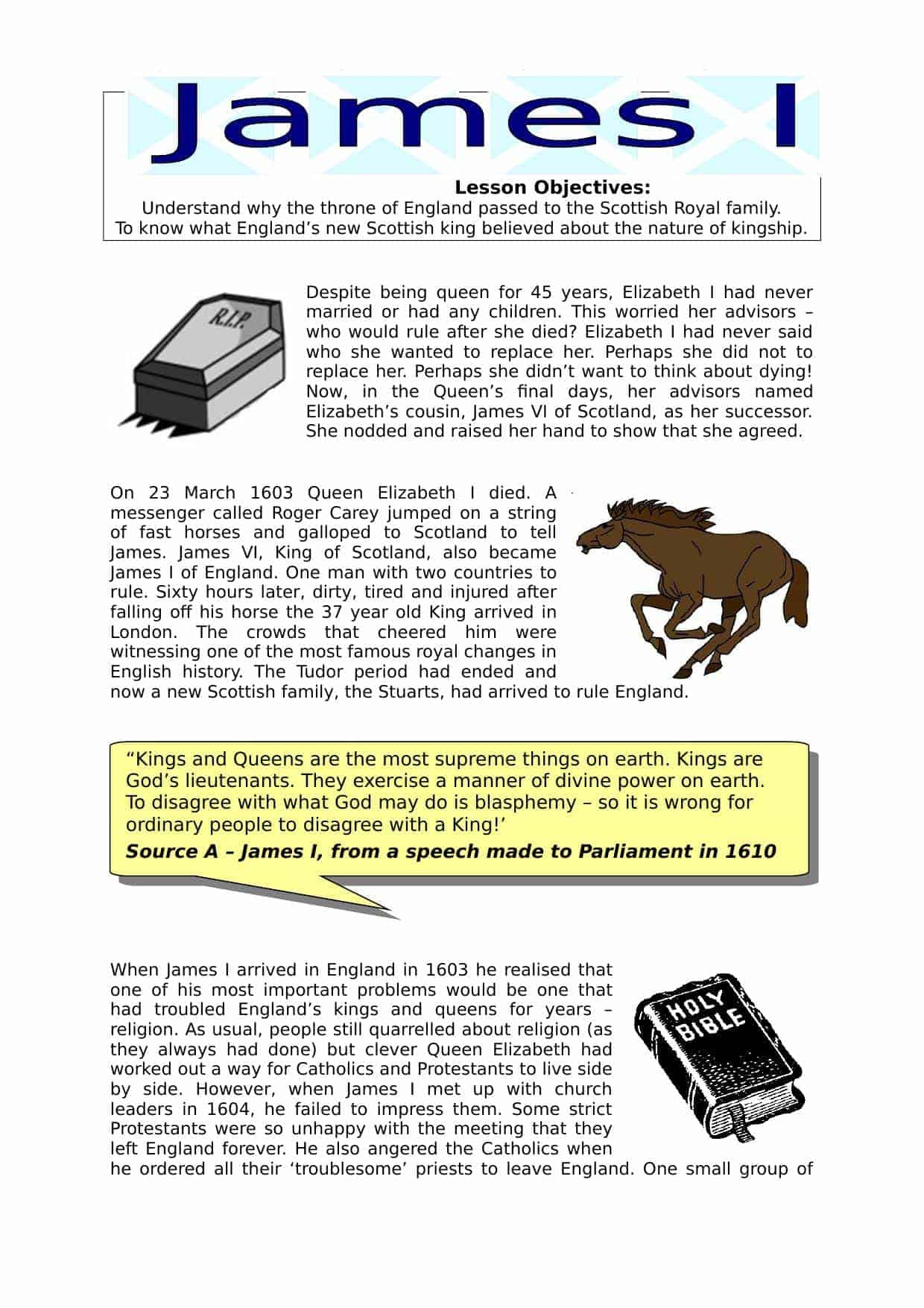 Despite being queen for 45 years, Elizabeth I had never married or had any children. This worried her advisors – who would rule after she died? Elizabeth I had never said who she wanted to replace her. Perhaps she did not to replace her. Perhaps she didn’t want to think about dying! Now, in the Queen’s final days, her advisors named Elizabeth’s cousin, James VI of Scotland, as her successor. She nodded and raised her hand to show that she agreed.

On 23 March 1603 Queen Elizabeth I died. A messenger called Roger Carey jumped on a string of fast horses and galloped to Scotland to tell James. James VI, King of Scotland, also became James I of England. One man with two countries to rule. Sixty hours later, dirty, tired and injured after falling off his horse the 37 year old King arrived in London. The crowds that cheered him were witnessing one of the most famous royal changes in English history. The Tudor period had ended and now a new Scottish family, the Stuarts, had arrived to rule England.

When James I arrived in England in 1603 he realised that one of his most important problems would be one that had troubled England’s kings and queens for years – religion. As usual, people still quarrelled about religion (as they always had done) but clever Queen Elizabeth had worked out a way for Catholics and Protestants to live side by side. However, when James I met up with church leaders in 1604, he failed to impress them. Some strict Protestants were so unhappy with the meeting that they left England forever. He also angered the Catholics when he ordered all their ‘troublesome’ priests to leave England. One small group of Catholics was so angry that they decided to launch one of the most famous murder plans in history – the Gunpowder Plot.

James I also managed to fall out with Parliament in a big way. He needed Parliament to help him rule – but he didn’t want them to disagree with anything. When Parliament refused to collect money for the king, James sent all of the politicians home for 10 years. James then asked his friends to help him run the country –finding other ways to get money apart from taxes. However, despite managing to find ways to get lots of cash, James was even better at spending it and by his death in 1625, the King was bankrupt.

1. Look at the Fact File on James I that you have been given, paying particular attention to the portrait. Write a description of James I’s appearance.
2. Give a reason why the painting on the Fact File might not show the actual truth about James.
3. Look at Sources A and C.
In your own words what do you think ‘Divine Right of Kings’ might mean and why MPs would not be keen on it?