Types of crime in the nineteenth century 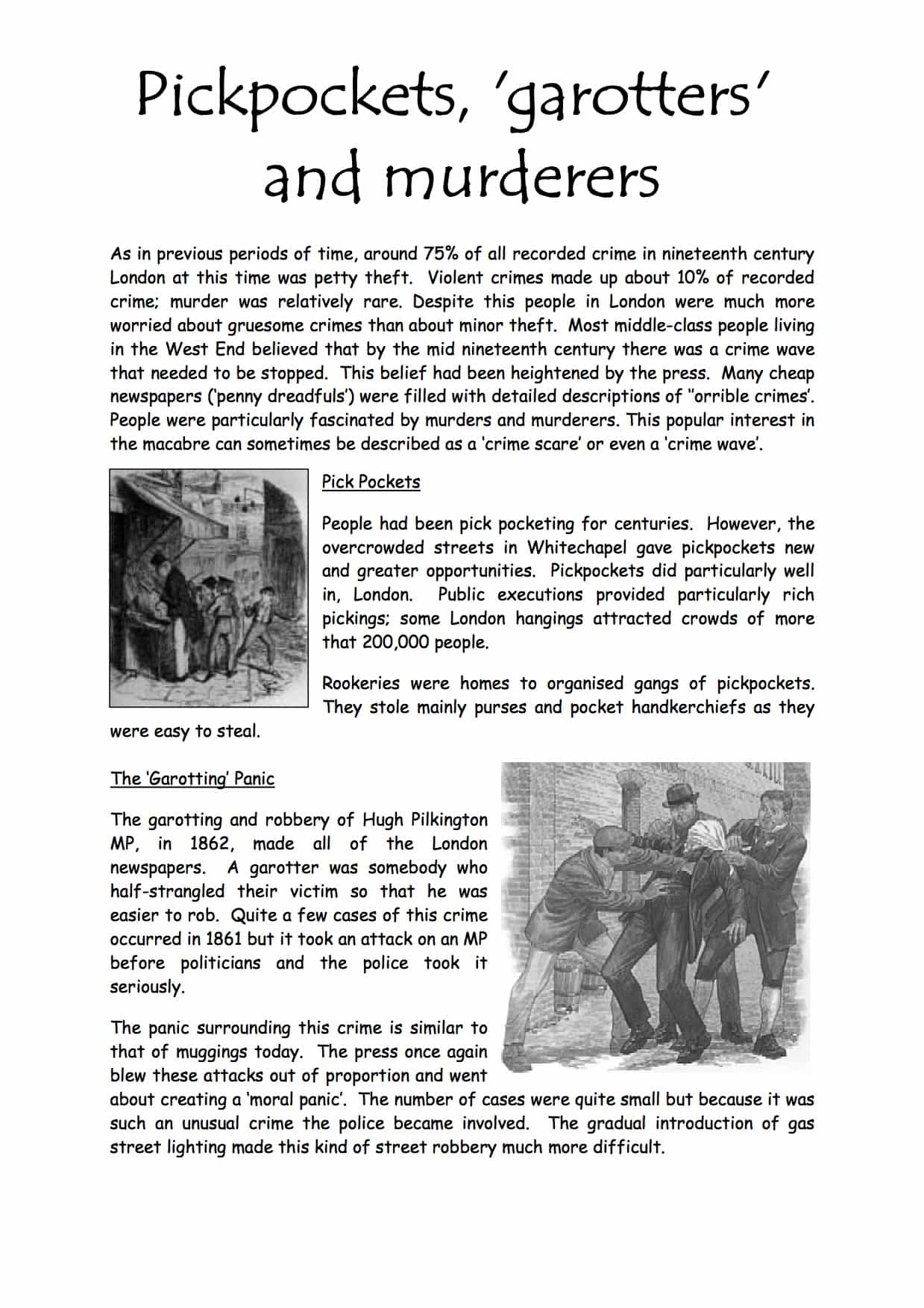 As in previous periods of time, around 75% of all recorded crime in nineteenth century London at this time was petty theft. Violent crimes made up about 10% of recorded crime; murder was relatively rare. Despite this people in London were much more worried about gruesome crimes than about minor theft. Most middle-class people living in the West End believed that by the mid nineteenth century there was a crime wave that needed to be stopped. This belief had been heightened by the press. Many cheap newspapers (‘penny dreadfuls’) were filled with detailed descriptions of ‘’orrible crimes’. People were particularly fascinated by murders and murderers. This popular interest in the macabre can sometimes be described as a ‘crime scare’ or even a ‘crime wave’.

People had been pick pocketing for centuries. However, the overcrowded streets in Whitechapel gave pickpockets new and greater opportunities. Pickpockets did particularly well in, London. Public executions provided particularly rich pickings; some London hangings attracted crowds of more that 200,000 people.

Rookeries were homes to organised gangs of pickpockets. They stole mainly purses and pocket handkerchiefs as they

The garotting and robbery of Hugh Pilkington MP, in 1862, made all of the London newspapers. A garotter was somebody who half-strangled their victim so that he was easier to rob. Quite a few cases of this crime occurred in 1861 but it took an attack on an MP before politicians and the police took it seriously.

The panic surrounding this crime is similar to that of muggings today. The press once again blew these attacks out of proportion and went about creating a ‘moral panic’. The number of cases were quite small but because it was such an unusual crime the police became involved. The gradual introduction of gas street lighting made this kind of street robbery much more difficult.

Murder captured the public interest during the nineteenth century. This was partly because of better communications and increased press reporting. Before the press became involved if a murder was committed in London only people living in the city and the surrounding areas would know about it. With the development of national newspapers, serious crimes could now be reported all over the country.

Improvements in detection and policing also meant that more murderers were caught and brought to trial. The newspapers went on to report on these trials in great detail. These newspapers helped to spread waves of panic about murder – especially the famous ‘Jack the Ripper’ murders of the 1880s. The fact that murder was in the newspapers more meant that people believed that murder was on the increase – when the truth was that the new Metropolitan Police Force was reducing the murder rate.

Between 1800 and 1850 there were many riots and protest movements in Great Britain. This public unrest was caused by the many social and economic changes which followed the Industrial Revolution. Before 1800, many political protests – including treason and civil war – had been committed by the middle and upper classes. The mid-nineteenth century saw the working classes, who were still without the vote, using riots and protests as the only way to show the government their unhappiness. These protest groups included the Chartists, the Luddites, Swing Riots and the Anti-Corn Law League.