Types of Punishment in the 19th Century 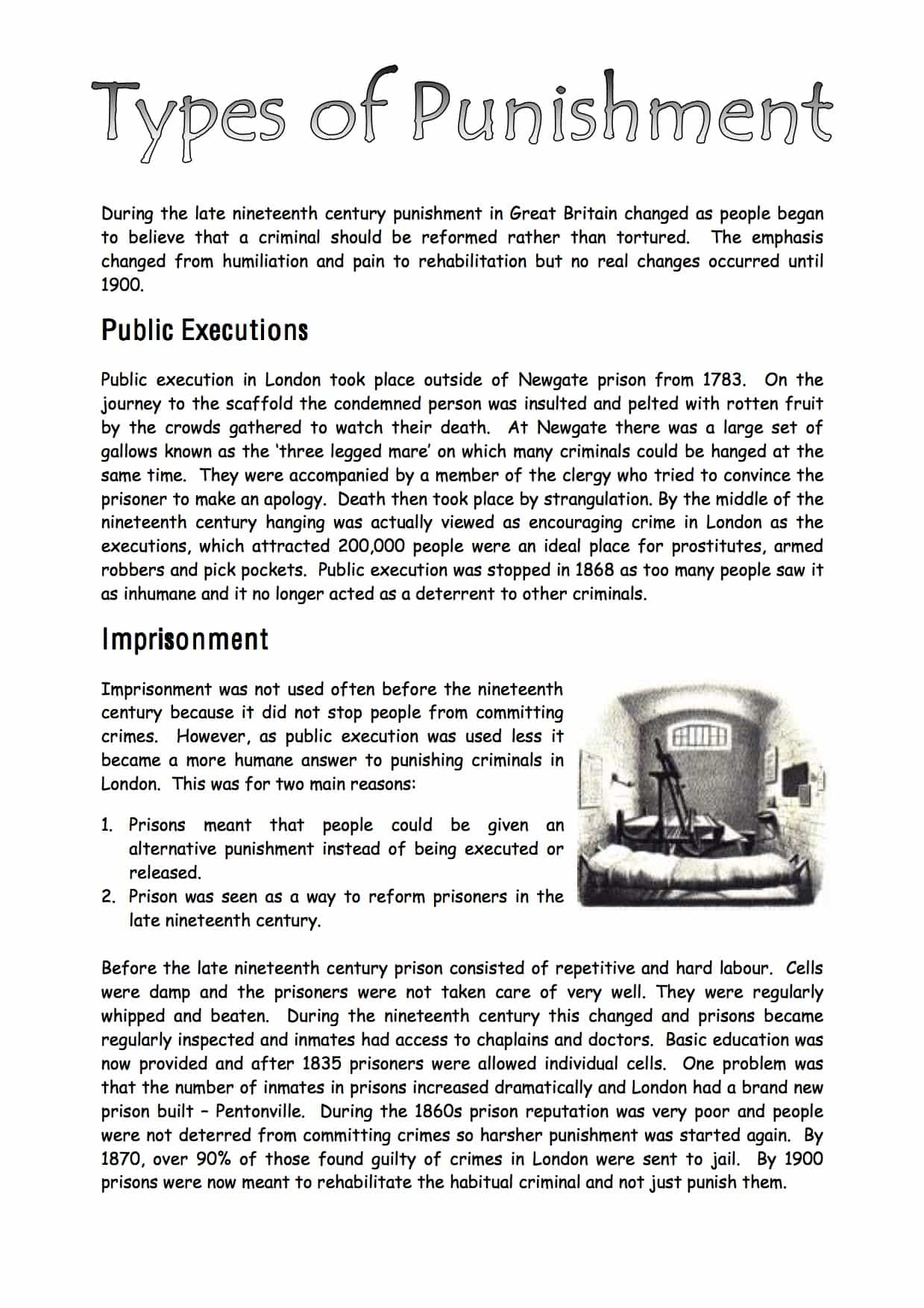 During the late nineteenth century punishment in Great Britain changed as people began to believe that a criminal should be reformed rather than tortured. The emphasis changed from humiliation and pain to rehabilitation but no real changes occurred until 1900.

Public execution in London took place outside of Newgate prison from 1783. On the journey to the scaffold the condemned person was insulted and pelted with rotten fruit by the crowds gathered to watch their death. At Newgate there was a large set of gallows known as the ‘three legged mare’ on which many criminals could be hanged at the same time. They were accompanied by a member of the clergy who tried to convince the prisoner to make an apology. Death then took place by strangulation. By the middle of the nineteenth century hanging was actually viewed as encouraging crime in London as the executions, which attracted 200,000 people were an ideal place for prostitutes, armed robbers and pick pockets. Public execution was stopped in 1868 as too many people saw it as inhumane and it no longer acted as a deterrent to other criminals.

Imprisonment was not used often before the nineteenth century because it did not stop people from committing crimes. However, as public execution was used less it became a more humane answer to punishing criminals in London. This was for two main reasons:

Before the late nineteenth century prison consisted of repetitive and hard labour. Cells were damp and the prisoners were not taken care of very well. They were regularly whipped and beaten. During the nineteenth century this changed and prisons became regularly inspected and inmates had access to chaplains and doctors. Basic education was now provided and after 1835 prisoners were allowed individual cells. One problem was that the number of inmates in prisons increased dramatically and London had a brand new prison built – Pentonville. During the 1860s prison reputation was very poor and people were not deterred from committing crimes so harsher punishment was started again. By 1870, over 90% of those found guilty of crimes in London were sent to jail. By 1900 prisons were now meant to rehabilitate the habitual criminal and not just punish them.

Fines – For the rich a system of fines in the late nineteenth century was a definite advantage. They were a way of settling with the law, especially for acts of violence. By paying fines, the rich could escape other forms of punishment for almost any offences except murder and treason.