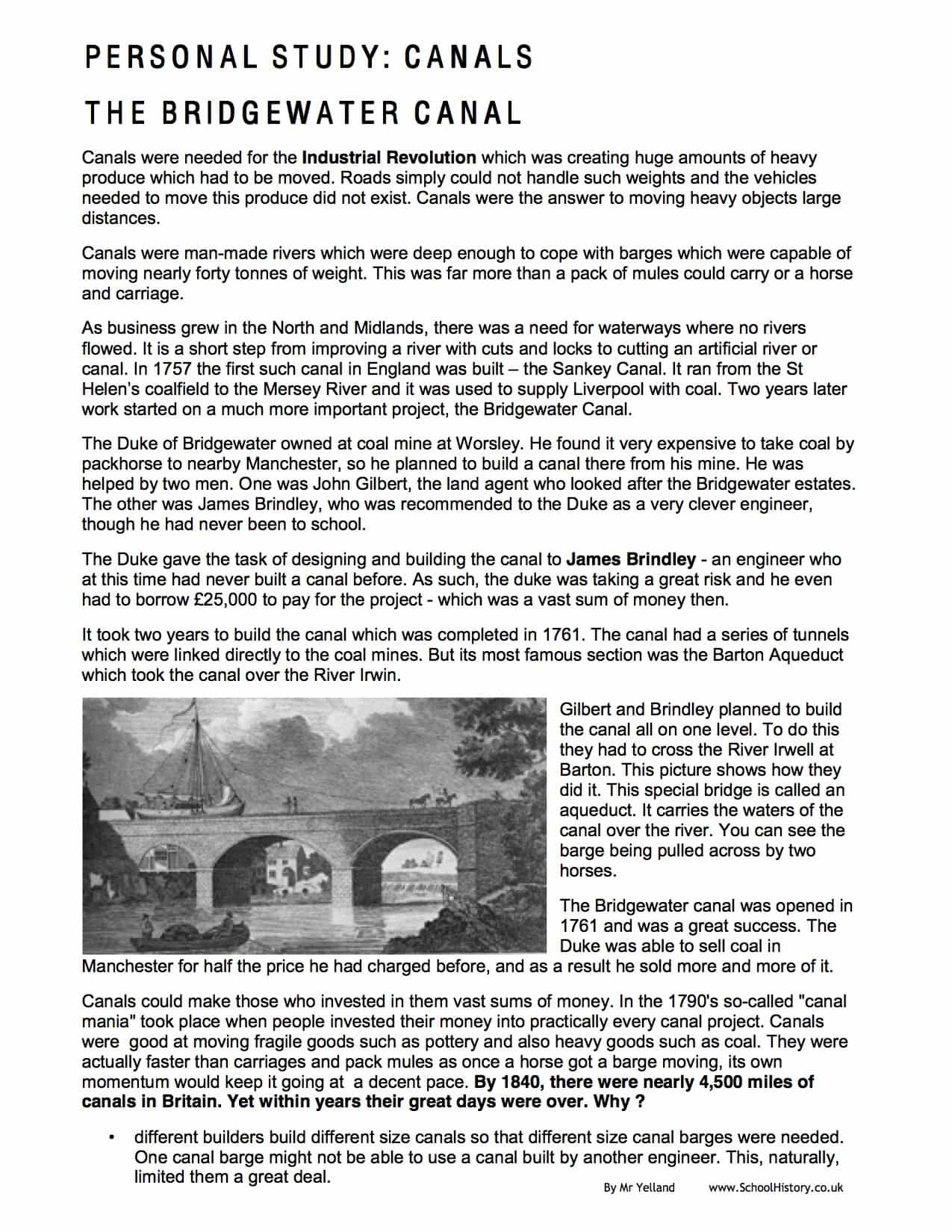 Canals were needed for the Industrial Revolution which was creating huge amounts of heavy produce which had to be moved. Roads simply could not handle such weights and the vehicles needed to move this produce did not exist. Canals were the answer to moving heavy objects large distances.

Canals were man-made rivers which were deep enough to cope with barges which were capable of moving nearly forty tonnes of weight. This was far more than a pack of mules could carry or a horse and carriage.

As business grew in the North and Midlands, there was a need for waterways where no rivers flowed. It is a short step from improving a river with cuts and locks to cutting an artificial river or canal. In 1757 the first such canal in England was built – the Sankey Canal. It ran from the St Helen’s coalfield to the Mersey River and it was used to supply Liverpool with coal. Two years later work started on a much more important project, the Bridgewater Canal.

The Duke of Bridgewater owned at coal mine at Worsley. He found it very expensive to take coal by packhorse to nearby Manchester, so he planned to build a canal there from his mine. He was helped by two men. One was John Gilbert, the land agent who looked after the Bridgewater estates. The other was James Brindley, who was recommended to the Duke as a very clever engineer, though he had never been to school.

The Duke gave the task of designing and building the canal to James Brindley – an engineer who at this time had never built a canal before. As such, the duke was taking a great risk and he even had to borrow £25,000 to pay for the project – which was a vast sum of money then.

It took two years to build the canal which was completed in 1761. The canal had a series of tunnels which were linked directly to the coal mines. But its most famous section was the Barton Aqueduct which took the canal over the River Irwin.

Gilbert and Brindley planned to build the canal all on one level. To do this they had to cross the River Irwell at Barton. This picture shows how they did it. This special bridge is called an aqueduct. It carries the waters of the canal over the river. You can see the barge being pulled across by two horses.

The Bridgewater canal was opened in 1761 and was a great success. The Duke was able to sell coal in

Manchester for half the price he had charged before, and as a result he sold more and more of it.

Canals could make those who invested in them vast sums of money. In the 1790’s so-called “canal mania” took place when people invested their money into practically every canal project. Canals were good at moving fragile goods such as pottery and also heavy goods such as coal.

They were actually faster than carriages and pack mules as once a horse got a barge moving, its own momentum would keep it going at a decent pace. By 1840, there were nearly 4,500 miles of canals in Britain. Yet within years their great days were over. Why ?