Do you want to save dozens of hours in time? Get your evenings and weekends back? Be able to teach The French Revolution to your students? 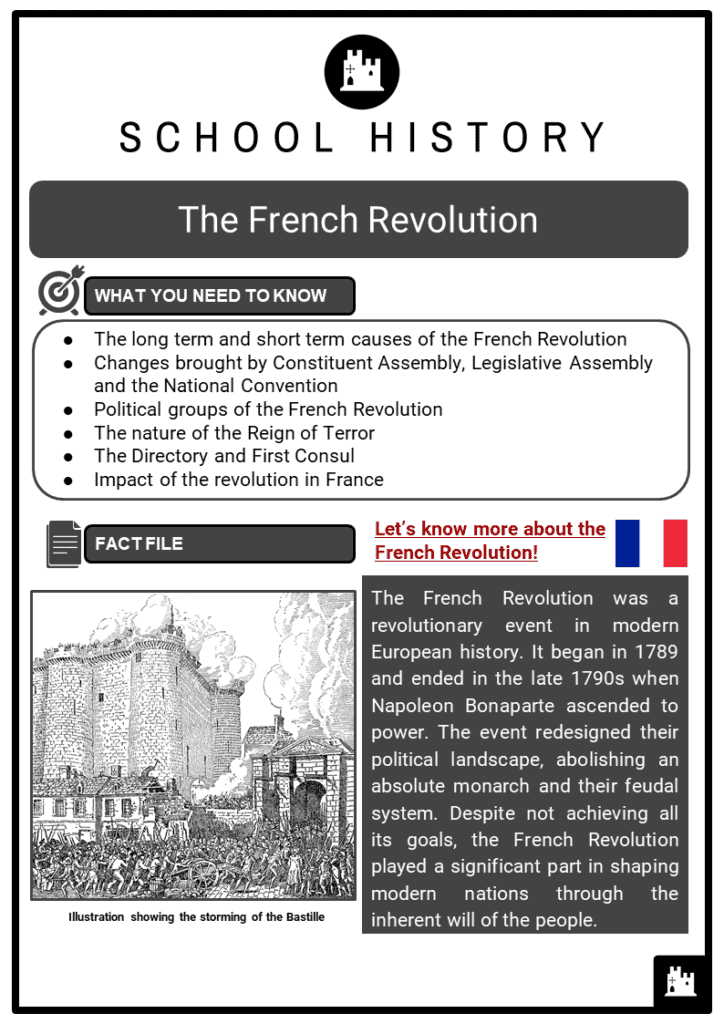 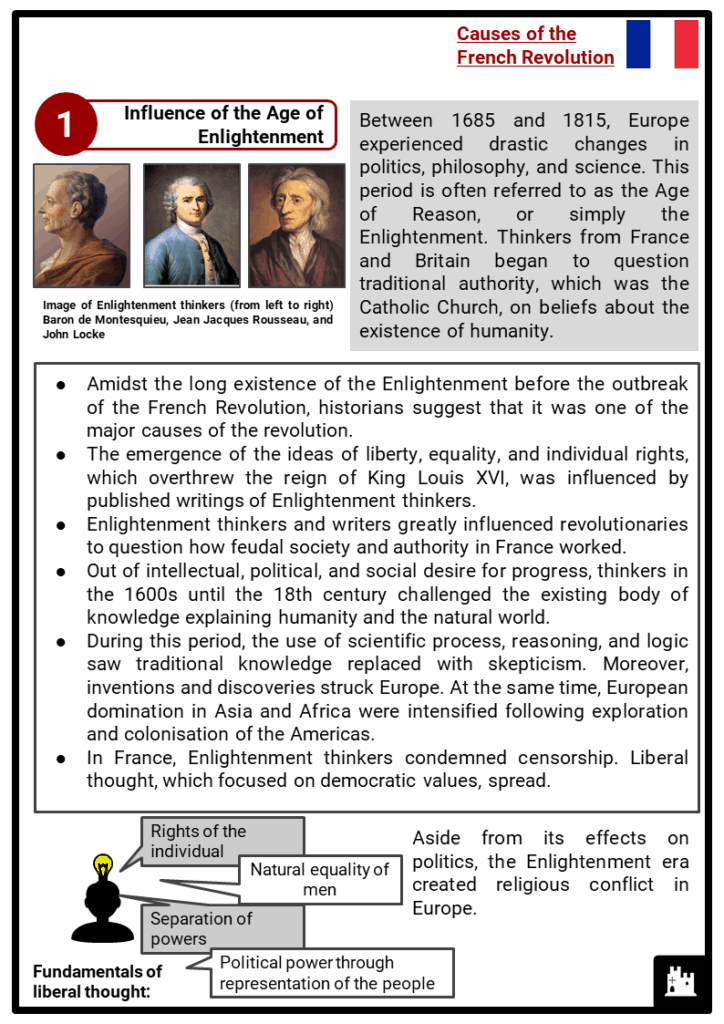 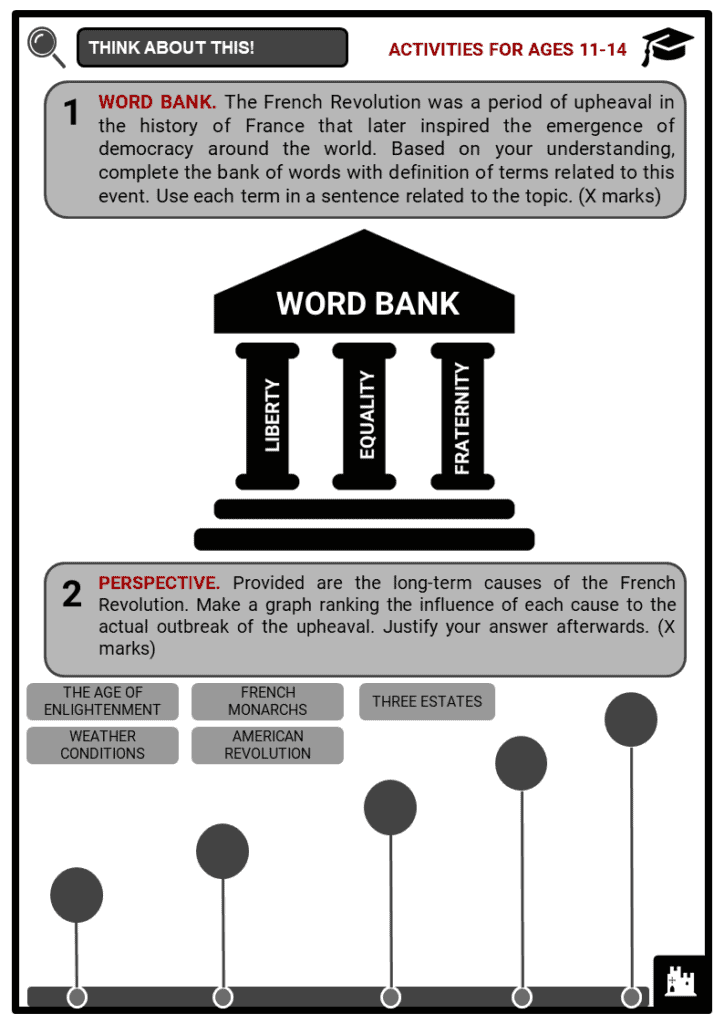 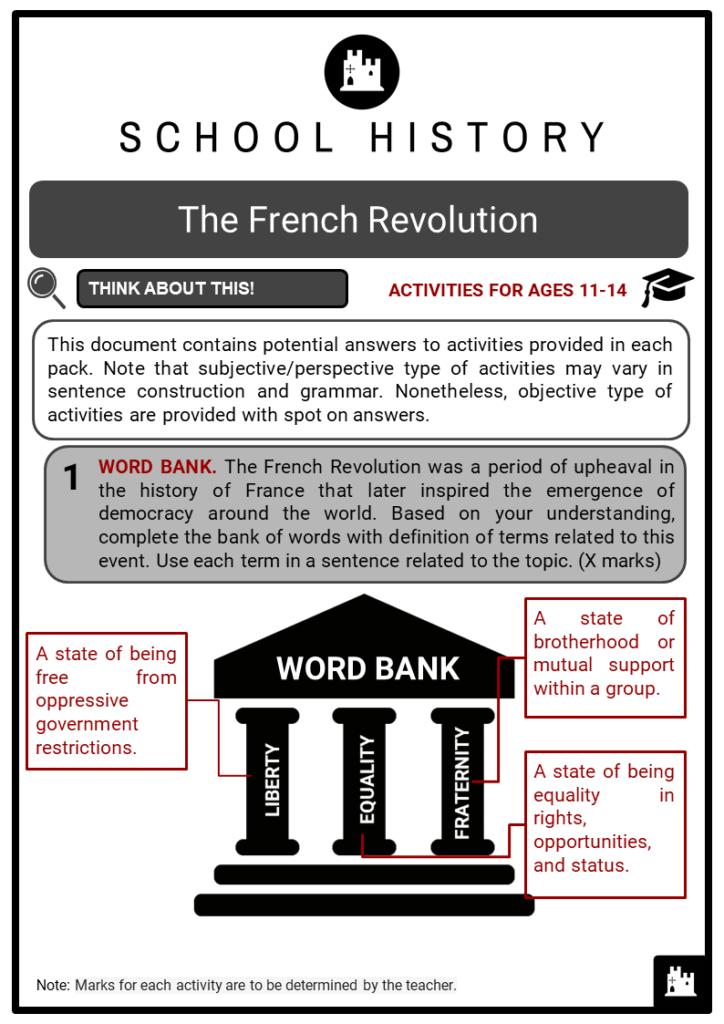 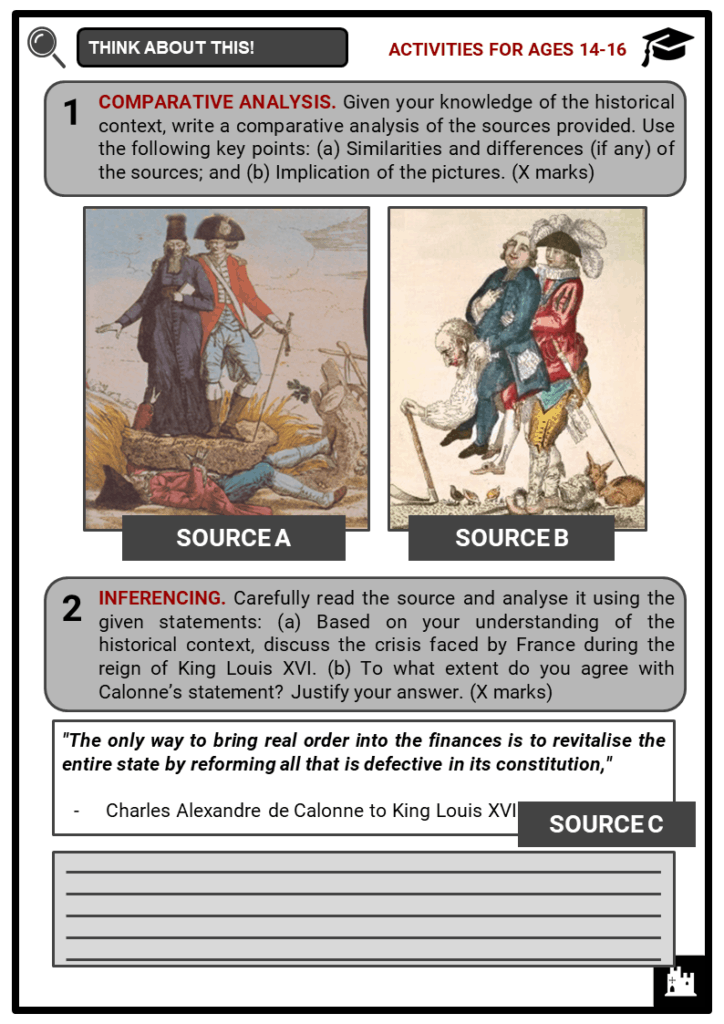 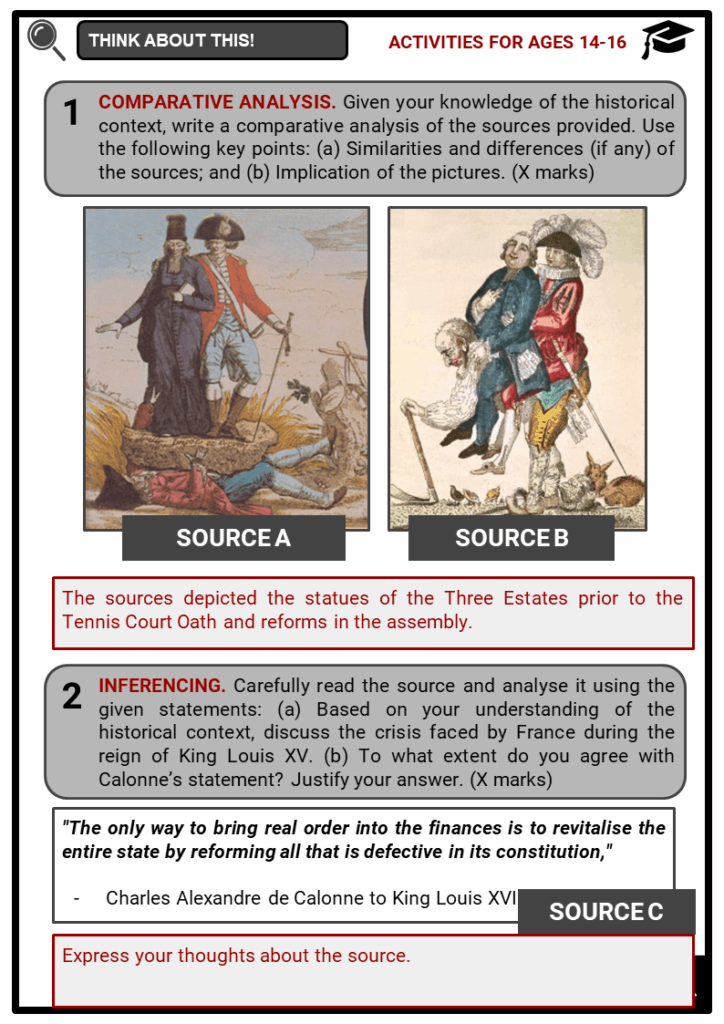 As the 18th century drew to a close, King Louis XVI’s extravagance and France’s involvement in the American Revolution had left France on the verge of bankruptcy. Peasants were unhappy with the depletion of royal coffers, two decades of poor harvests, drought, cattle disease and skyrocketing bread prices. Peasants had heavy taxes imposed on them while the Catholic Church got off scot-free. They expressed this resentment through riots, loots and strikes. 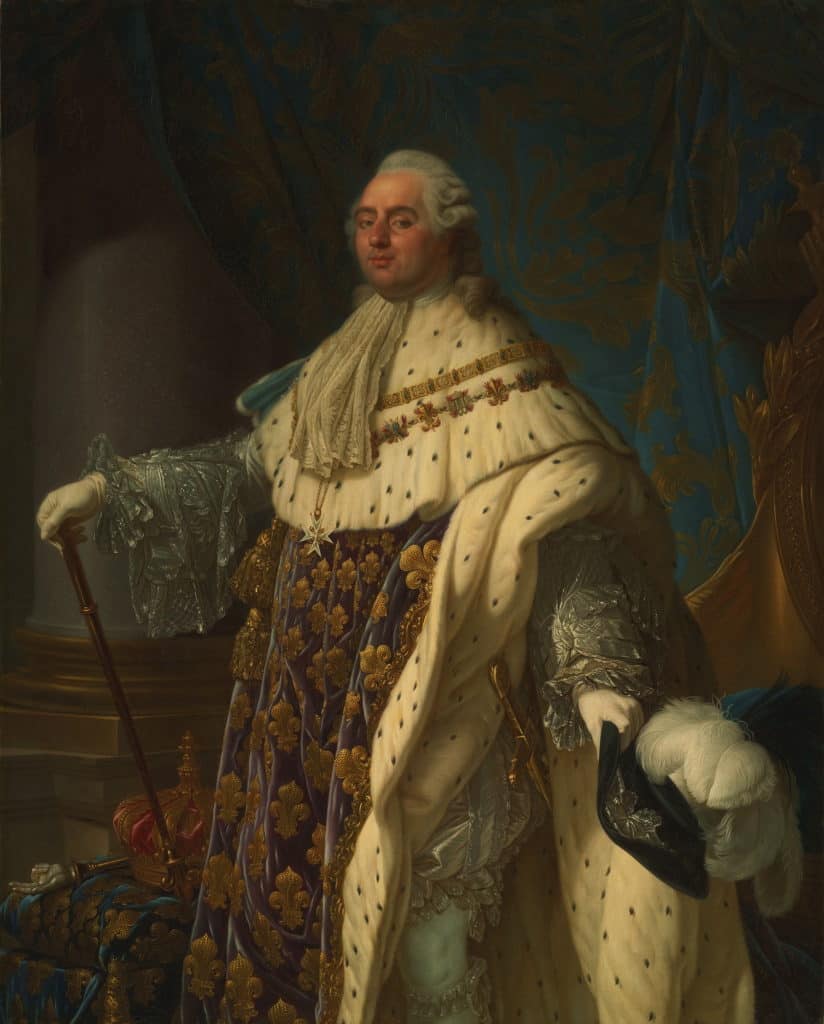 In the fall of 1786, Charles Alexandre de Calonne, who was the king’s controller general, proposed a financial reform package that had a universal land tax from which the privileged classes would no longer be exempt. The king called for the Estates-General in order to garner support for these measures and forestall a growing aristocratic revolt. An assembly was formed that represented France’s clergy, nobility and middle class. The last time such an assembly was formed was in 1614. The dynamic of the French population had changed considerably since 1614. The non-aristocratic members of the Third Estate now represented 98 percent of the people but could still be outvoted by the other two bodies. The meeting was to occur on May 5, 1789, and the Estate Generals would compile the list of grievances from their respective delegates and present them to the king.

Members of the Third Estate started to gather support for equal representation and wanted voting to be done by the head and not by status. This would be achieved through abolishing the noble veto. This would, however, prove to be difficult as the nobles were reluctant to give up their numerous privileges as they benefitted from the current traditional system. 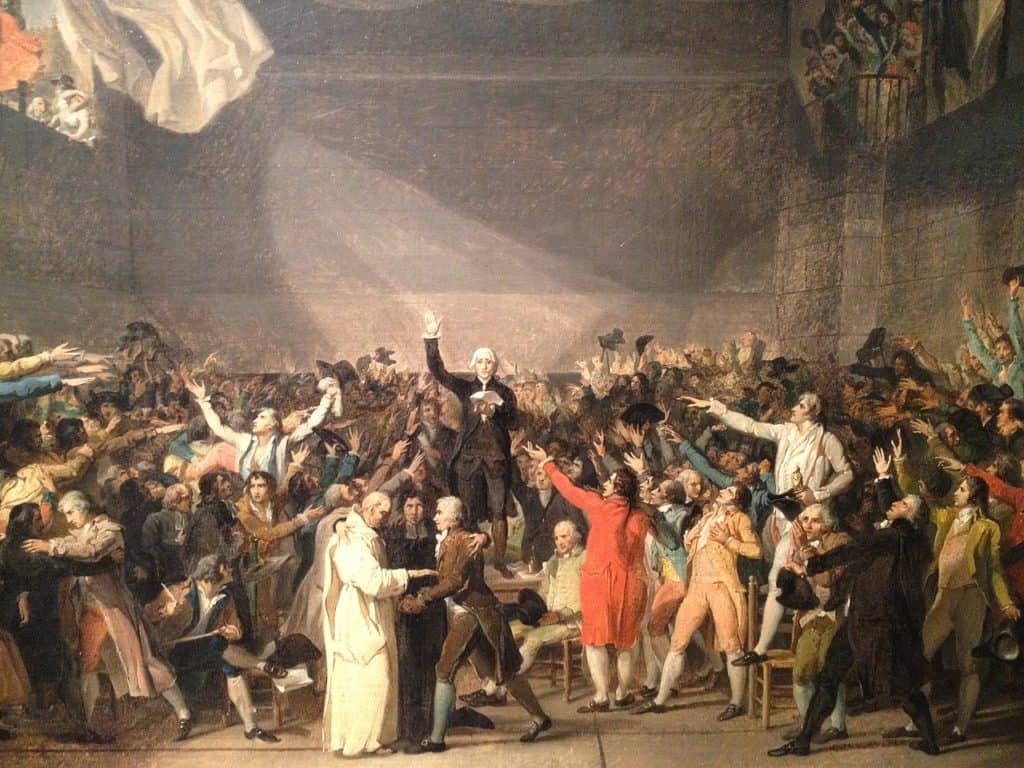 When the talks in Versailles had stalled, the Third Estate met on their own and formally adopted the title of National Assembly on June 20th. This meeting was conducted in a nearby indoor tennis court and all its members took the so-called Tennis Court Oath (segment du jeu de paume), where they vowed not to disperse until constitutional reform had been achieved. This was an attempt to twist the king’s arm and the members from the other estates. They were soon joined by most of the clerical deputies and 47 liberal nobles and, on June 27, King Louis XVI was forced to absorb all three estates into the new assembly.

The Bastille and the Great Fear

A restructured body from the original National Assembly, known as the National Constituent Assembly, continued to meet at Versailles on June 12 as fear and violence consumed the capital.

The fear and violence of Parisians were because of rumours of an impending military coup even though they were enthusiastic about the recent breakdown of royal power. This violence was epitomised when an armed mob stormed Bastille, which was a fortress that held 12 prisoners, to secure gunpowder and weapons. This day is still celebrated by the French every July 14th and is a national holiday.

This hysteria soon spread out from the cities into the countryside as peasants revolted against years of exploitation. The peasants looted and burned the homes of tax collectors, landlords and the seigniorial elite.
The fear of the period was generally known as the Great Fear (la Grande Peur in French). The growing exodus of nobles from the country, hastened by the agrarian insurrection, inspired the National Constituent Assembly to abolish feudalism on August 4, 1789, signing what the historian Georges Lefebvre later called the “death certificate of the old order.”

Declaration of the Rights of Man and of the Citizen

On August 4, the Assembly adopted the Declaration of the Rights of Man and of the Citizen (Déclaration des droits de l’homme et du citoyen) that was considered some sort of democratic document. This document highlighted the Assembly’s commitment to replace the Ancien Régime with a system based on equal opportunity, freedom of speech, popular sovereignty and representative government. All this was to be implemented by a Constitution.

Drafting a formal Constitution would prove to be a serious challenge for the National Constituent Assembly, however, which also had to act as a legislature during harsh economic times.

A major bone of contention between the Assembly’s members was France’s new political landscape. For example, they asked themselves, Who would be responsible for electing delegates? Would the clergy owe allegiance to the Roman Catholic Church or the French government? And would the king's public image be weakened further after a failed attempt to flee the country in June 1791?

On September 3, 1791, France adopted its first written constitution. Present in the constitution was a constitutional monarchy in which the king enjoyed royal veto power and the ability to appoint ministers. Influential leaders like Maximilien de Robespierre, Camille Desmoulins and Georges Danton did not like this and began seeking popular support for a more republican form of government and the trial of Louis XVI.

The Radicalisation of the French Revolution

War was declared on Austria and Prussia in April 1792 by the newly elected Legislative Assembly. They believed that French émigrés were building counterrevolutionary alliances and were spreading their revolutionary ideology across Europe through warfare.

Extremist Jacobins attacked the royal residence in Paris and arrested the king on August 10, 1792, as the political crisis took a radical turn.

In the months that followed, insurrectionists massacred hundreds of accused counterrevolutionaries and the Legislative Assembly was replaced by the National Convention, which announced the abolition of the monarchy and the establishment of the French Republic.

King Louis XVI was condemned to death for crimes and high treason and his execution was done by guillotine; his wife Marie-Antoinette suffered the same fate nine months later.

This was a period that ushered in the most violent and turbulent phase of the French Revolution. This happened after the execution of the king. The Jacobins seized control of the National Convention from the more moderate Girondins and implemented a series of radical measures, which included the establishment of a new calendar and the eradication of Christianity. They also unleashed a period of bloodshed, which was later to be referred to as the Reign of Terror. 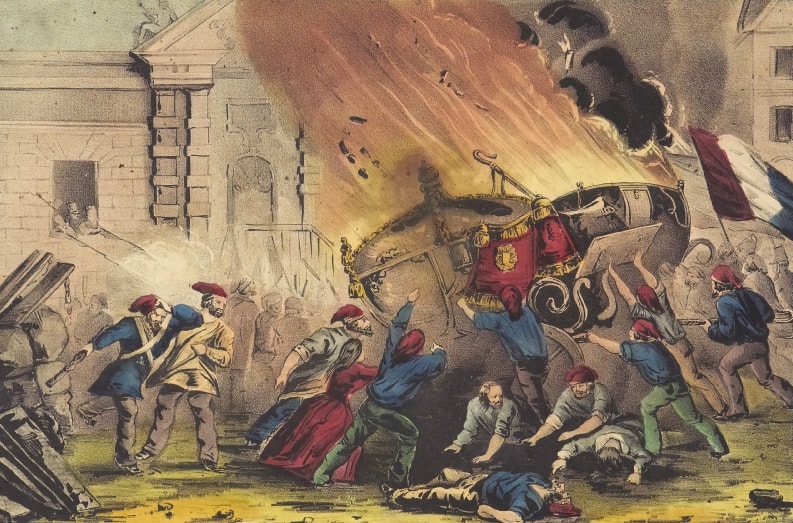 These killings were carried out by Robespierre, who dominated the draconian Committee of Public Safety until he was executed on July 28, 1794. The Thermidorian Reaction soon followed as they wanted a more conservative approach to achieve the goals of the French Revolution.

In general, the causes of the French Revolution can be summarised as follows: