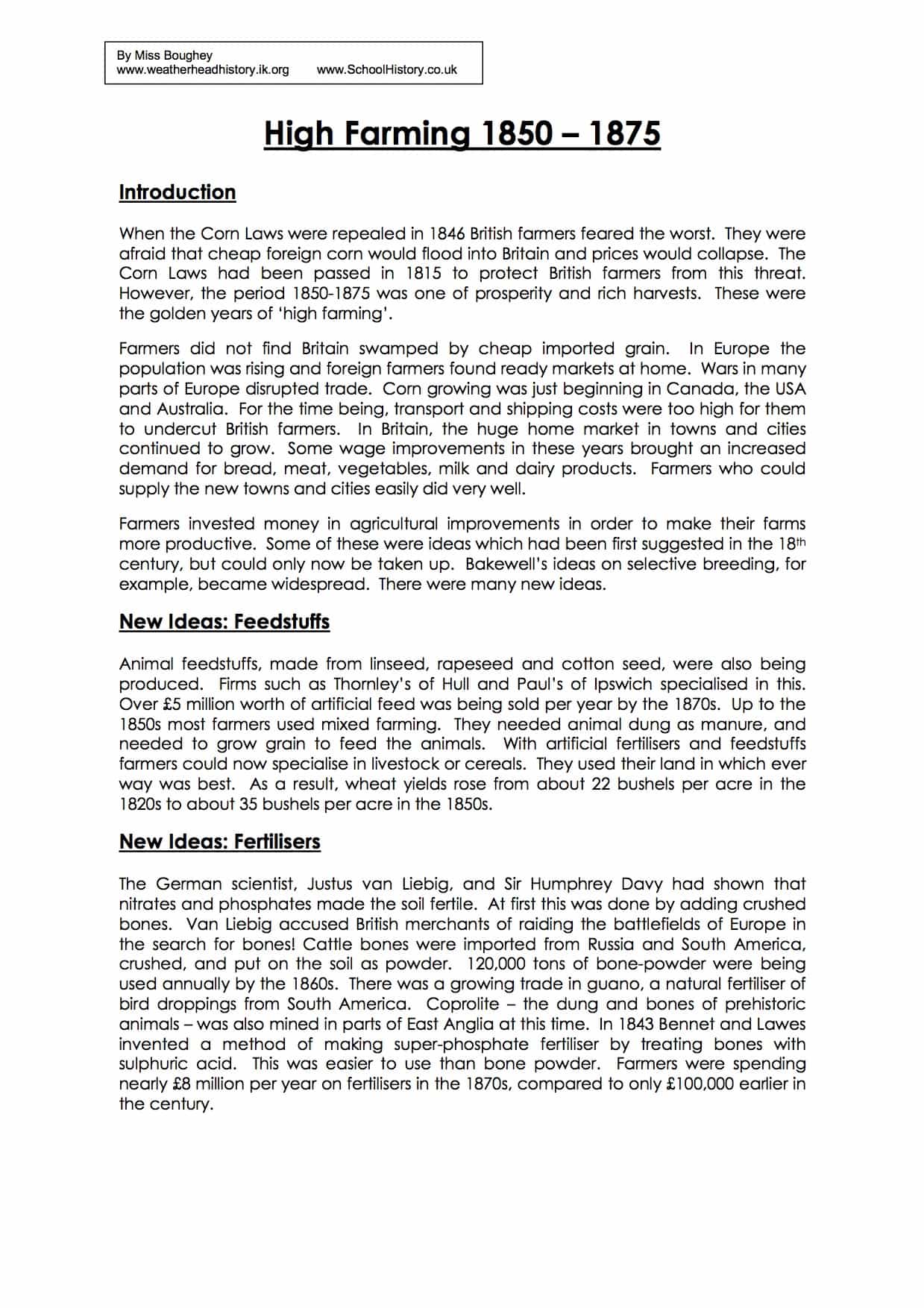 When the Corn Laws were repealed in 1846 British farmers feared the worst. They were afraid that cheap foreign corn would flood into Britain and prices would collapse. The Corn Laws had been passed in 1815 to protect British farmers from this threat. However, the period 1850-1875 was one of prosperity and rich harvests. These were the golden years of ‘high farming’.

Farmers did not find Britain swamped by cheap imported grain. In Europe the population was rising and foreign farmers found ready markets at home. Wars in many parts of Europe disrupted trade. Corn growing was just beginning in Canada, the USA and Australia. For the time being, transport and shipping costs were too high for them to undercut British farmers. In Britain, the huge home market in towns and cities continued to grow. Some wage improvements in these years brought an increased demand for bread, meat, vegetables, milk and dairy products. Farmers who could supply the new towns and cities easily did very well.

Farmers invested money in agricultural improvements in order to make their farms more productive. Some of these were ideas which had been first suggested in the 18th century, but could only now be taken up. Bakewell’s ideas on selective breeding, for example, became widespread. There were many new ideas.

Animal feedstuffs, made from linseed, rapeseed and cotton seed, were also being produced. Firms such as Thornley’s of Hull and Paul’s of Ipswich specialised in this. Over £5 million worth of artificial feed was being sold per year by the 1870s. Up to the 1850s most farmers used mixed farming. They needed animal dung as manure, and needed to grow grain to feed the animals. With artificial fertilisers and feedstuffs farmers could now specialise in livestock or cereals. They used their land in which ever way was best. As a result, wheat yields rose from about 22 bushels per acre in the 1820s to about 35 bushels per acre in the 1850s.

The German scientist, Justus van Liebig, and Sir Humphrey Davy had shown that nitrates and phosphates made the soil fertile. At first this was done by adding crushed bones. Van Liebig accused British merchants of raiding the battlefields of Europe in the search for bones! Cattle bones were imported from Russia and South America, crushed, and put on the soil as powder. 120,000 tons of bone-powder were being used annually by the 1860s. There was a growing trade in guano, a natural fertiliser of bird droppings from South America. Coprolite – the dung and bones of prehistoric animals – was also mined in parts of East Anglia at this time. In 1843 Bennet and Lawes invented a method of making super-phosphate fertiliser by treating bones with sulphuric acid. This was easier to use than bone powder. Farmers were spending nearly £8 million per year on fertilisers in the 1870s, compared to only £100,000 earlier in the century.

Many farmers invested money in better drainage. Hand made drainage pipes were expensive – about 50 shillings (£2.50) per 100. By the 1850s machine made pipes could be bought for £1.00 per 1000. The price of drainage land fell to under £5 an acre, and the Agricultural Act 1846 made loans available to farmers for this work. Heavy land could now be made more workable.

The mid-19th century was a time when machines came to be used on farms on quite a wide scale. First there were small-scale hand machines which saved time and labour, such as chaff-cutters and beet-slicers. Iron ploughs, harrows, hoes and rollers were also produced easily and cheaply by the new iron industry. Specialist firms grew up to make a huge range of tools and machines for agriculture. Many were based in rural areas, such as Ransome’s of Ipswich and Howard’s of Bedford.

Steam power had brought such great changes to the other industries of Britain that it is not surprising it was also applied to agriculture. Some of the results were successful, such as the steam-powered threshing machine (see source 2D). These were usually owned by contractors and hired by farmers on a daily basis. A steam engine, called a traction engine, provided the power; unthreshed corn was fed in at the top of the threshing machine, grain poured into sacks at the back, and straw was stacked at the far left. It is estimated that about two thirds of the corn harvest was threshed by machine by 1880. Steam ploughing was more complicated. The traction engine stood at one side of the field and round a wheel on the other side. A special balance plough was then hauled from side to side of the field. At the end of each furrow