Do you want to save dozens of hours in time? Get your evenings and weekends back? Be able to teach Public Health During the Industrial Revolution to your students? 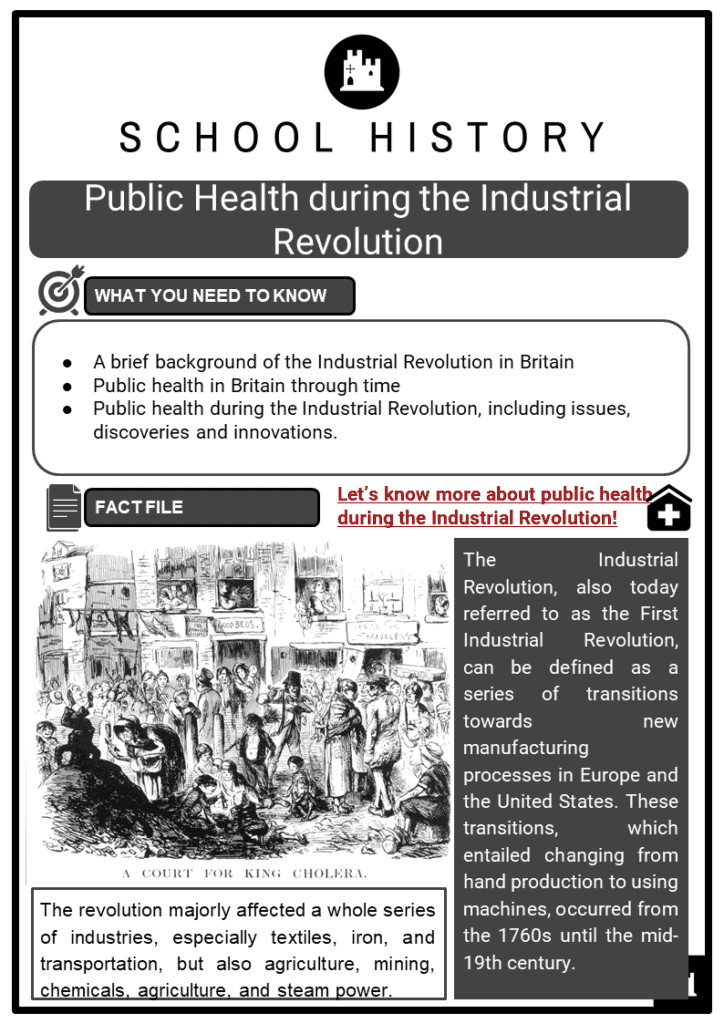 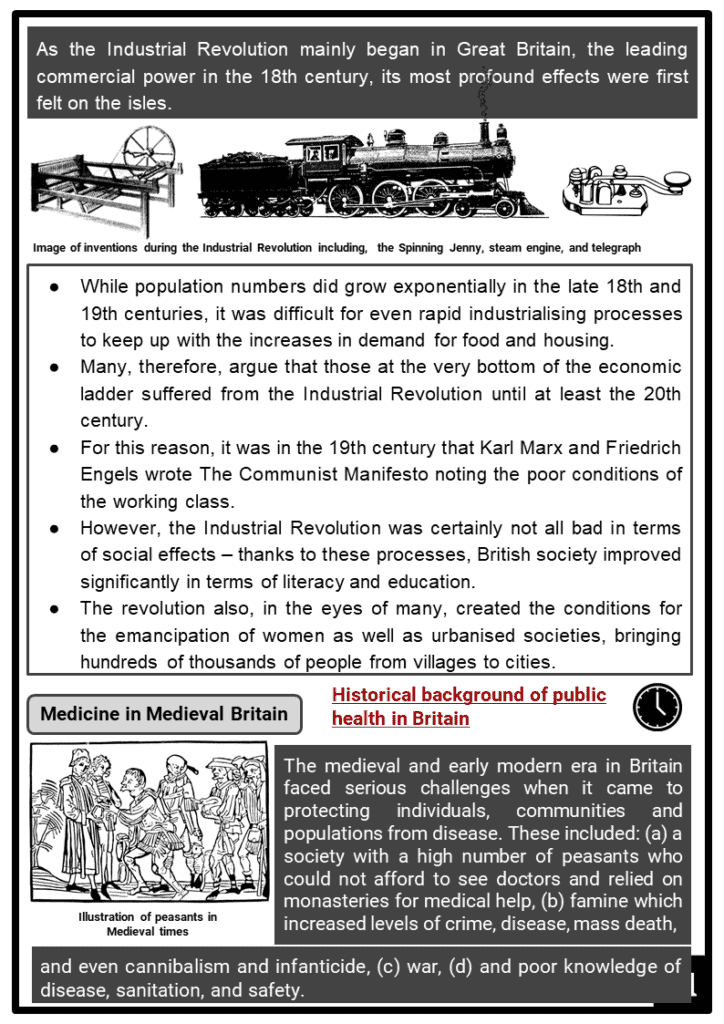 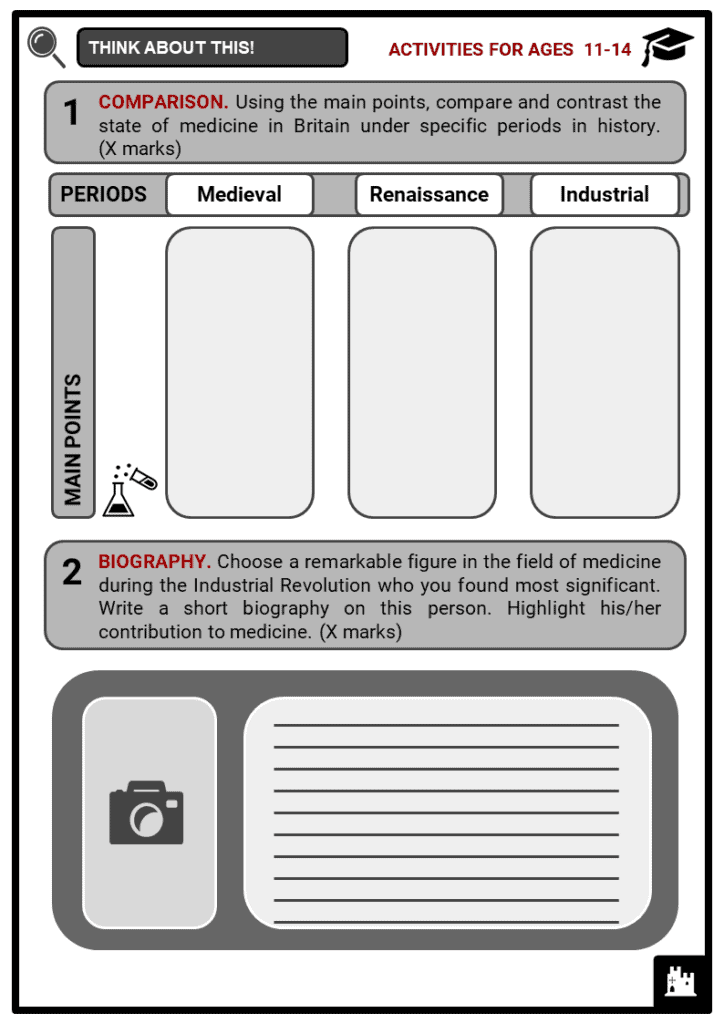 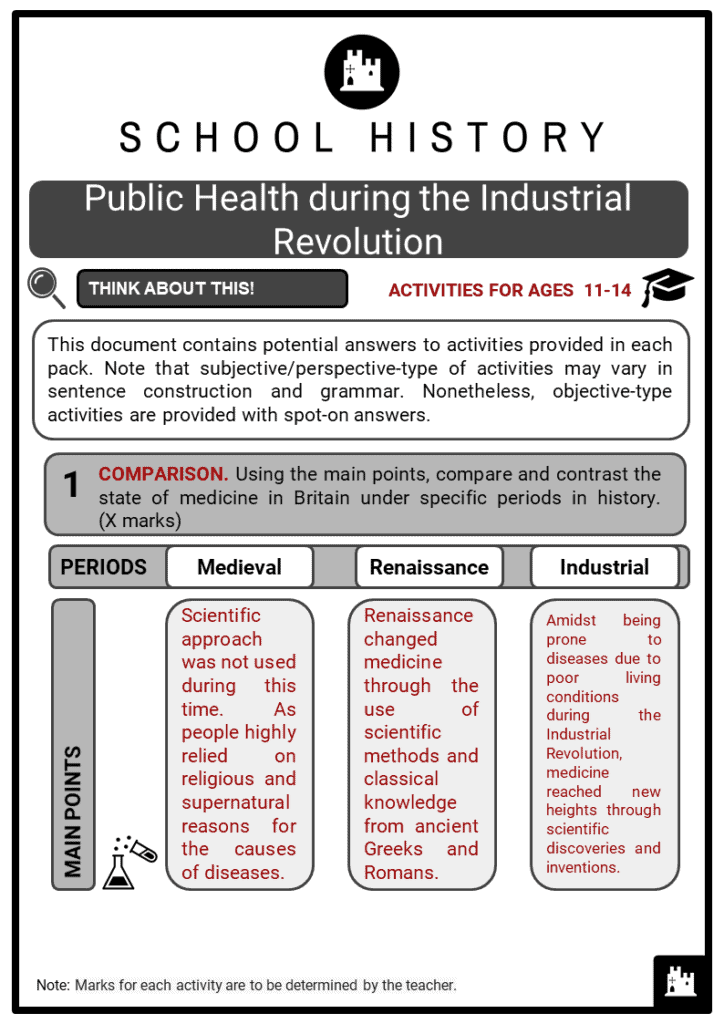 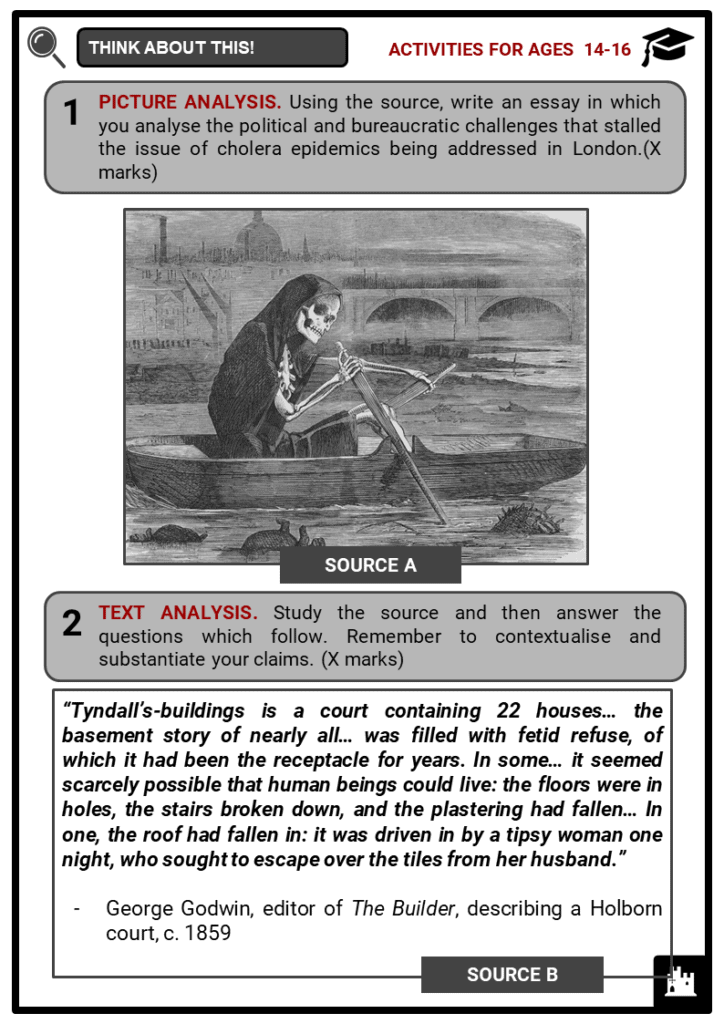 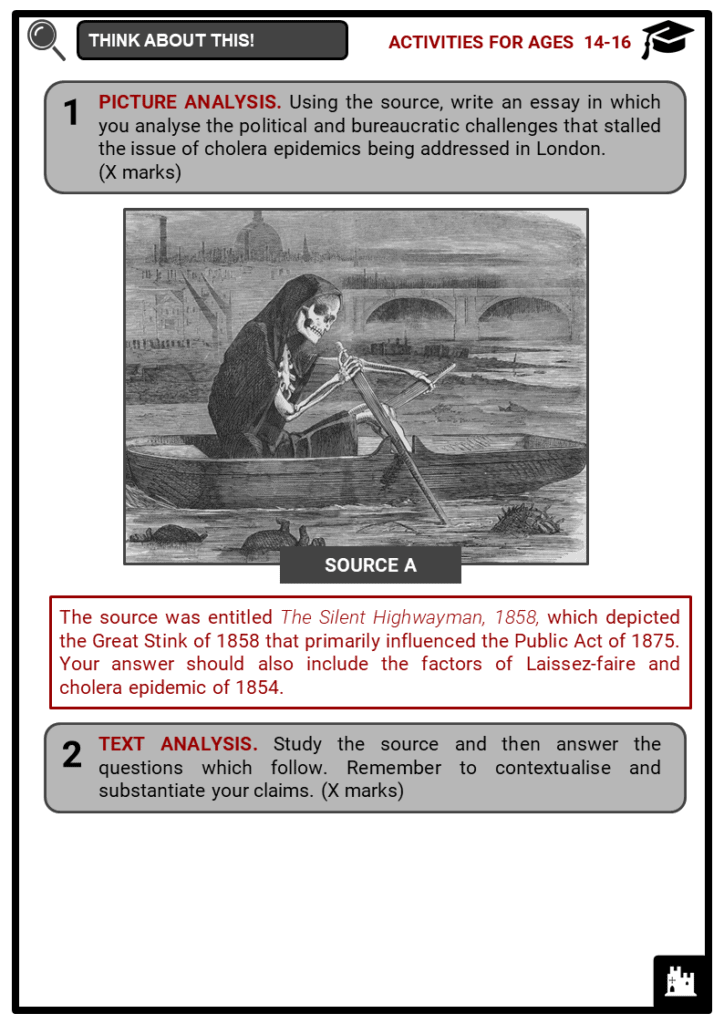 The key public health issues during the industrial revolution included widespread epidemics of infectious diseases like cholera, typhoid, typhus, smallpox, and tuberculosis. These can all be traced back to overpopulated cities, poor housing and living conditions, mass pollution and a lack of a public infrastructure to care for the citizenry’s health.

Cholera was a particularly deadly disease during the Industrial Revolution. With four major outbreaks throughout the mid-19th century and having claimed tens of thousands of lives, it got nicknamed “King Cholera”. 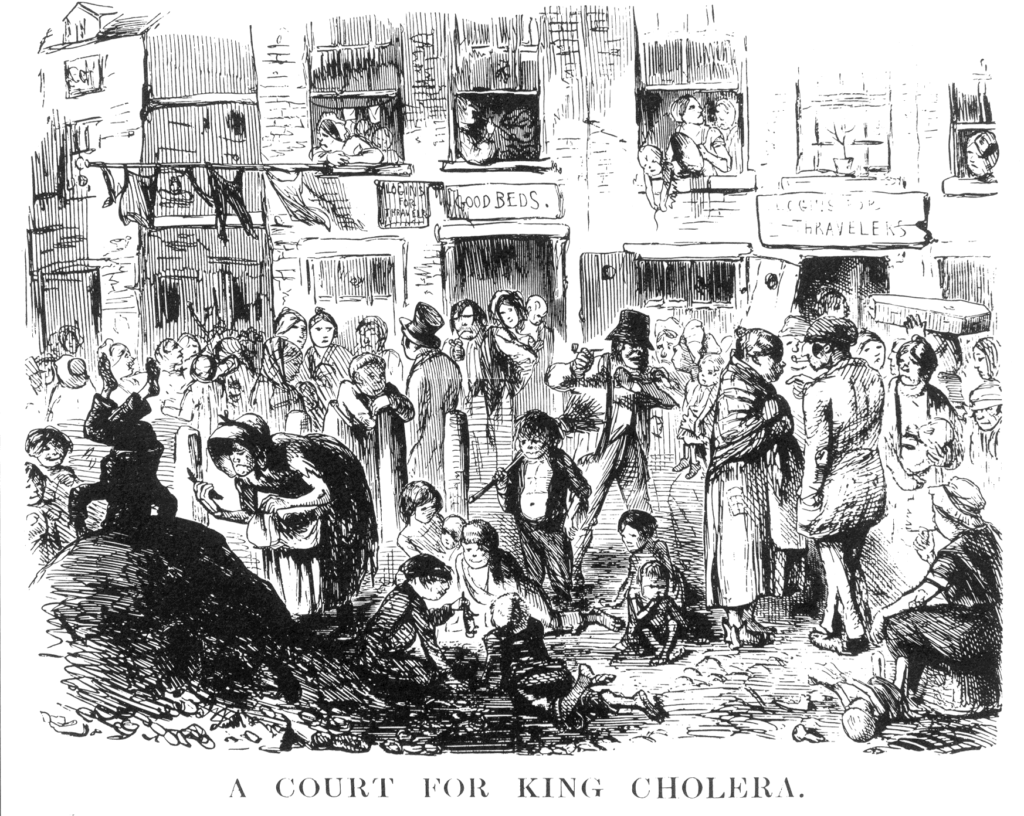 Cholera epidemics were caused and spread by dirty and contaminated water. This was largely down to the fact that raw sewage was being dumped into the Thames at unprecedently high rates. That same water from the river was also the main drinking source. Therefore, major water pollution combined with a lack of medical knowledge and expertise on cholera made it an impossible disease to tackle all the way up until Dr John Snow in 1854 discovered the true cause of cholera – water.

Meanwhile, the greatest killer in Britain during the Industrial Revolution was definitely tuberculosis (TB). This disease would attack the entire body, especially the lungs and although it does not claim as many lives today back in the 19th century it killed very often.

TB can be spread simply by breath and malnutritional individuals are particularly susceptible to it. This made Victorian London a ripe scene for the wide spread of TB. Poor living conditions, as many lived in slums, long working hours, and a lack of sufficient food or clean water meant that poor people of all ages could catch TB very easily. It is estimated that in 1800-1850m over a third of all deaths were caused by the illness.

Meanwhile, both typhoid and typhus were very feared diseases during the Industrial Revolution. They too were caused by poor living conditions and made worse by a lack of medical expertise on their causes and treatments. While typhoid was spread by infected water, typhus was carried on by lice. Both of these were incredibly common in the poorly built and insulated shacks and slums of the East End of London and its factories.

Although the first Industrial Revolution had facilitated many widespread public health issues in Victorian London, it also drove many public health improvements. Major discoveries in the causes of infectious diseases and their treatments, coupled with a greater focus on the social impact of the Revolution, provided for the building blocks of publicly funded healthcare.

Due to the widespread and greatly felt effects of cholera epidemics, many researchers became preoccupied with figuring out the disease’s root cause. While for centuries many had been satisfied with the classical miasma theory of disease (one which postulates that noxious air spreads disease), in the 19th century it had become apparent that it was simply insufficient. While there were many well intentioned efforts to curb cholera epidemics in the 19th century, such as those by the first Health Commissioner of London, Edwin Chadwick, these were simply no good as they relied on the incorrect assumption that the disease was in the air. 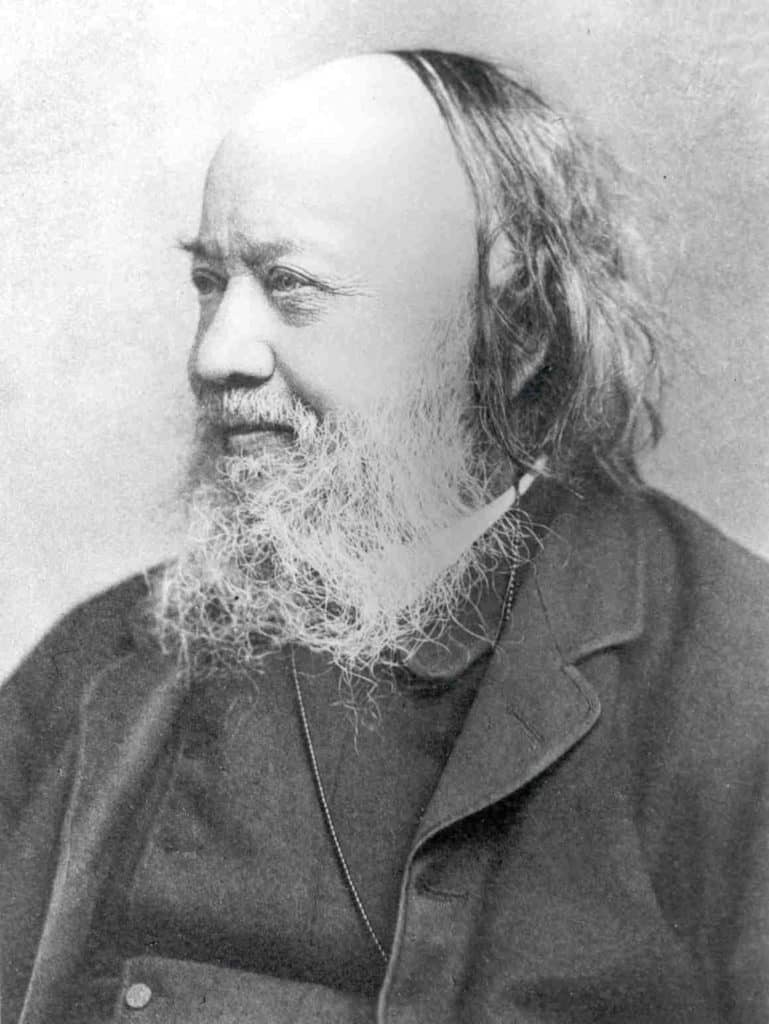 In fact, as John Snow finally proved in 1854, cholera was in the water. With this discovery Germ Theory, which is today the most dominant and accepted theory of disease and infections, was solidified. Finally, scientists and physicians had made the link between hygiene, water, and disease. This was to have a huge impact in the coming decades on the state of hospitals and health facilities, as well as homes that were being built.

At the same time, Louis Pasteur had discovered microbes in 1864, and by 1909 Paul Ehrlich had discovered a way to cure syphilis with his early research on chemotherapy. While the fruits of medical discoveries of the Industrial Revolution were only enjoyed later, the mass industrialization and urbanization of Britain had undoubtedly created the scene for these discoveries.

Similarly, while scientific professionals were seeking and finding cures for major illnesses, social thinkers were introducing revolutionary ideas about what role the state ought to play in the health of its citizens.

Edwin Chadwick, in particular, was one such thinker. The author of the 1834 Poor Law, Chadwick argued that it made economic sense for the state to care for the health and living conditions of the working class. This was because he argued, the deaths and widespread illnesses of these workers (largely facilitated by poor conditions) were costing the state even more money in reparations to their families. Therefore, with a series of Public Health Acts, beginning in 1848, Britain began to set up health boards and put health commissioners in charge of living and working conditions in all of the constituencies. These measures, although limited, had set a way of thinking on track towards the eventual creation of the National Health Service in 1948.

[1.] Szreter & Mooney; Mooney (February 1998). "Urbanization, Mortality, and the Standard of Living Debate: New Estimates of the Expectation of Life at Birth in Nineteenth-Century British Cities". The Economic History Review. 51 (1)