Do you want to save dozens of hours in time? Get your evenings and weekends back? Be able to teach Battle of Hastings to your students? 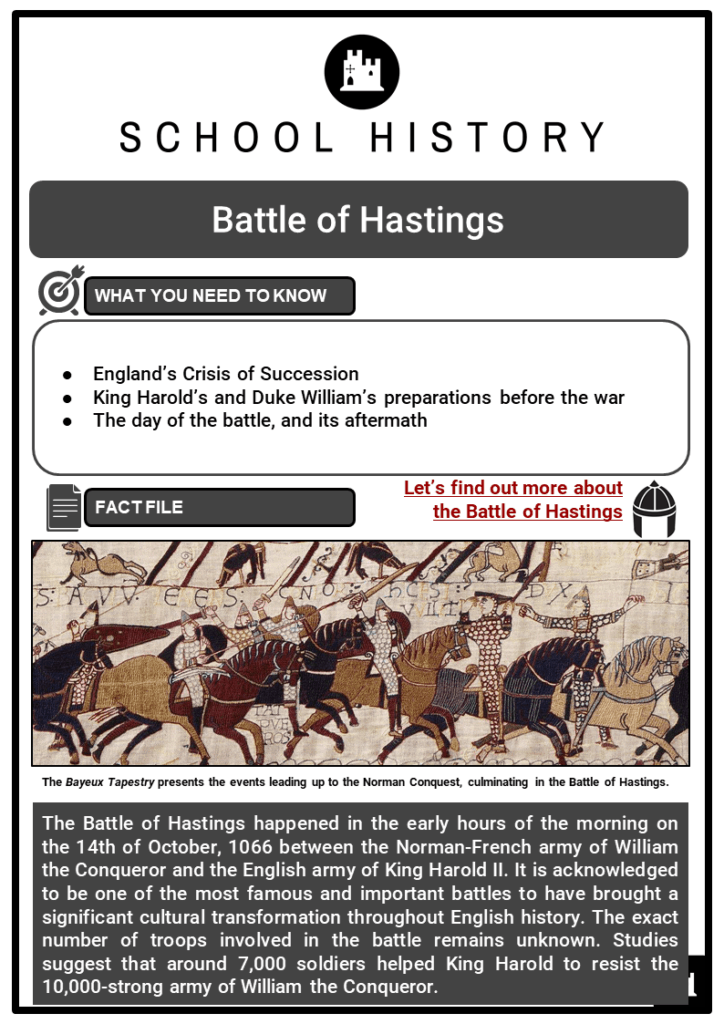 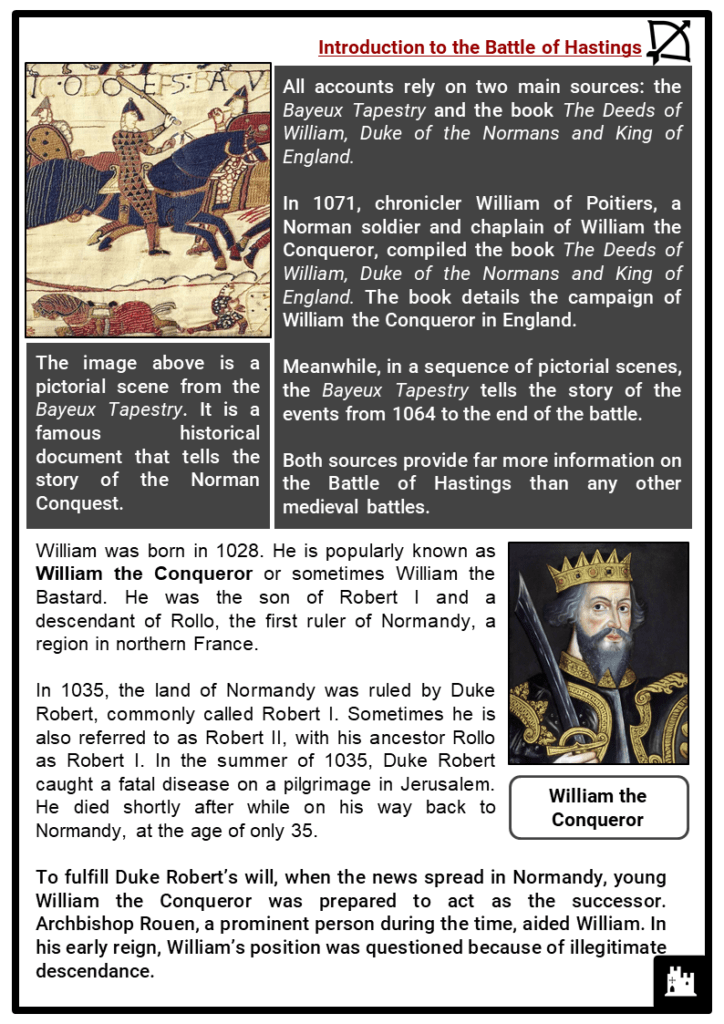 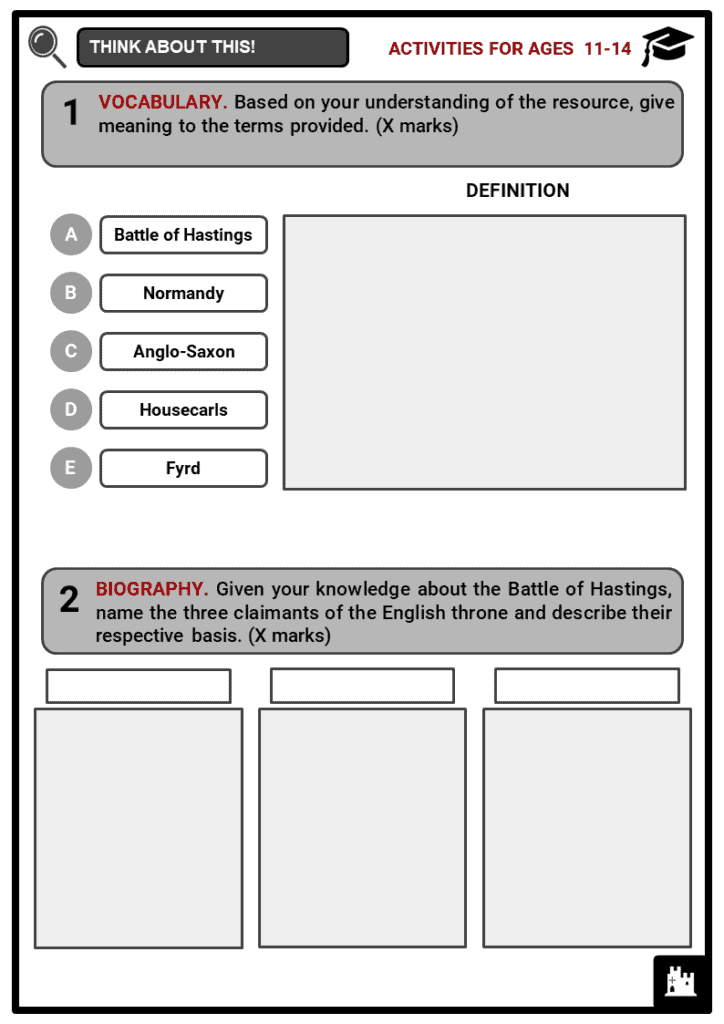 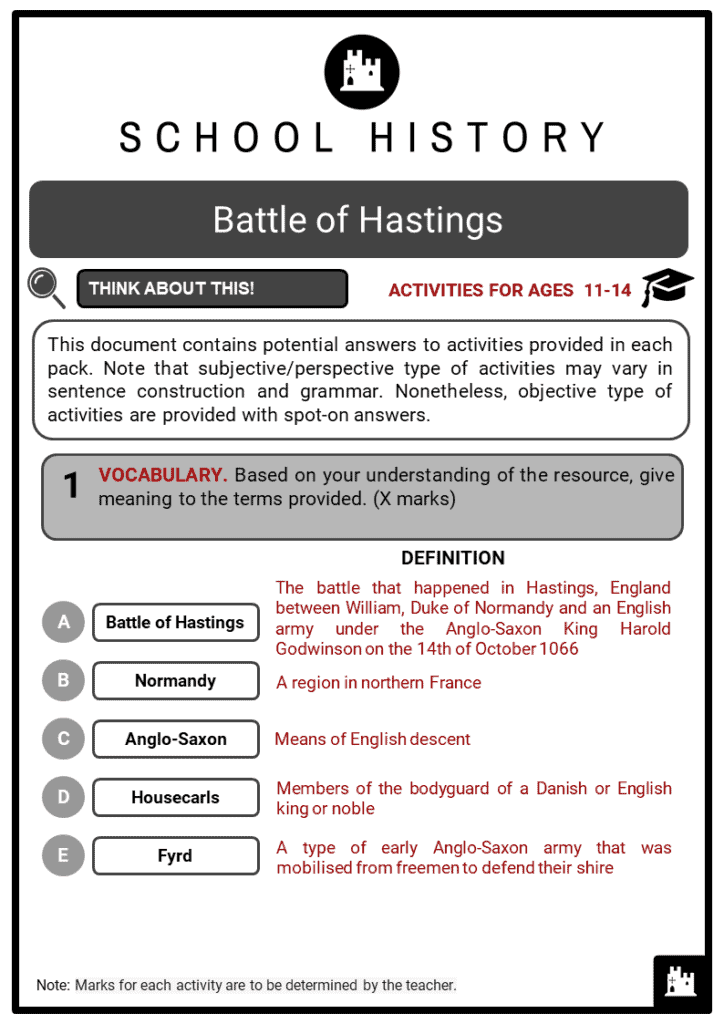 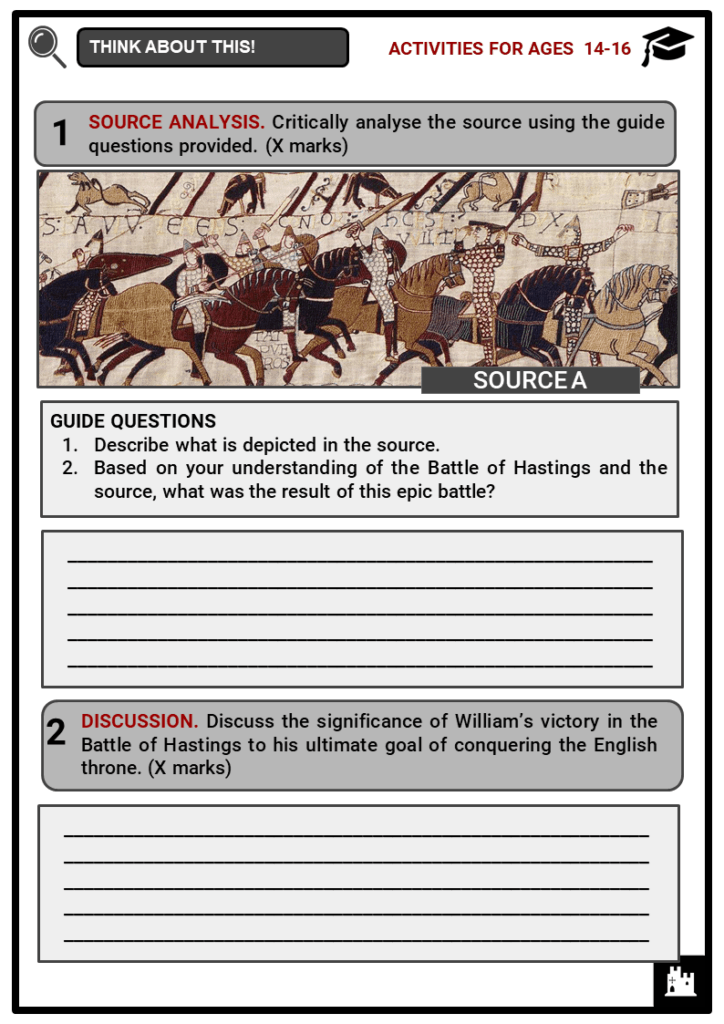 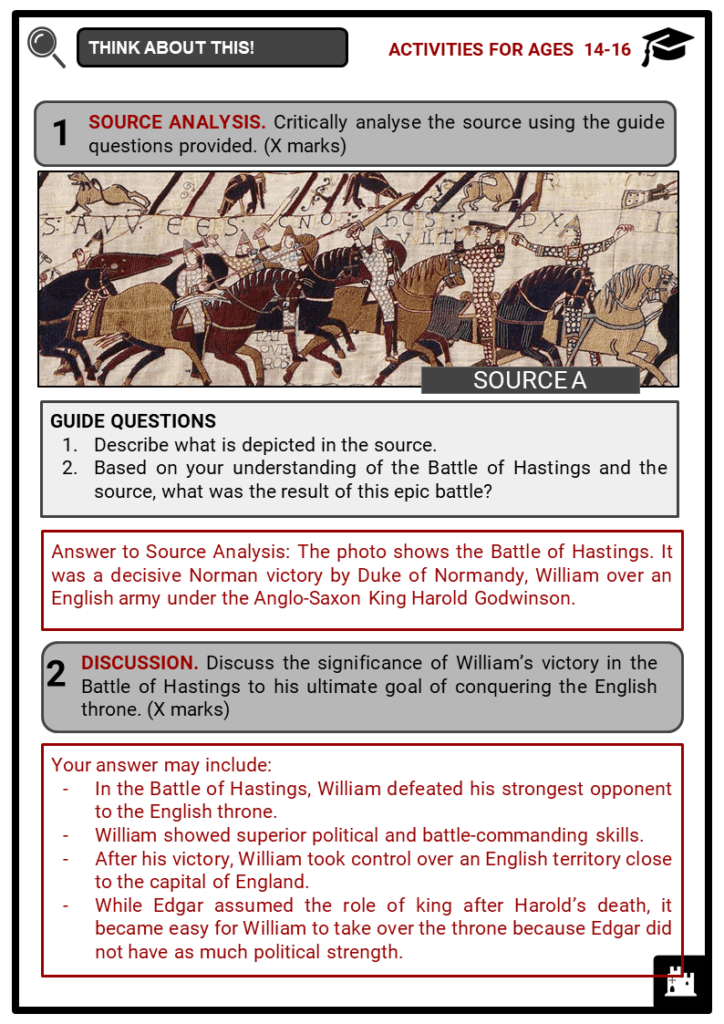 The King of England, Edward the Confessor, died between January 4-5, 1066, without leaving any heirs to the throne. The witan, an assembly composed of the principal noblemen and ecclesiastics of the kingdom, elected as the king’s successor the Earl of Wessex, Harold Godwinson, the richest and most powerful baron of England. He was crowned the day after Edward’s death.

However, strong opponents soon challenged the succession of the deceased king. William, Duke of Normandy, asserted that Edward had chosen him as his successor and that Harold had sworn to respect this arrangement. Edward had spent a good part of his youth in exile at the court of Normandy, and after coming to power he surrounded himself with Norman advisers. On his side, the Norwegian King Harald Hardrada had stipulated an agreement with his predecessor, Magnus the Good, and Edward's predecessor, Hardeknut, which stated that England and Norway would unite if one of the kings died without leaving an heir. As a consequence, William and Harald gathered their forces to invade the kingdom.

In early September, Harald arrived in England with a fleet of 300 ships and 15,000 men under his command. He also received reinforcements from Tostig, the exiled brother of King Harold, who had harassed the English coast a few months earlier with his own ships. Harald occupied York.

When Harold discovered the Norwegian invasion, he rushed up north, surprised the Norwegians and defeated them at Stamford Bridge on September 25. The invaders suffered heavy casualties: Harald and Tostig were killed, and out of 300 ships, only 24 of them remained. Nevertheless, the victory caused the Anglo-Saxons’ army to be heavily weakened.

William was forced to assemble a fleet from scratch, which took several months. His army, reunited at Dives-sur-Mer, then at Saint-Valery-sur-Somme, was composed not only of Normans but also of contingents from Brittany and Flanders. Moreover, William was also supported by Pope Alexander II.

Although William’s men were ready to cross the channel around August 12, operations are delayed for several weeks. The Norman chroniclers explain that this delay was due to bad weather, but it is more plausible that William preferred to wait until Harold returned his fleet to make sure an easier crossing. The Normans finally landed on September 28 in Pevensey, Sussex. William built a wooden castle in Hastings, from where he launched attacks on the surrounding area. Fortifications were also built in Pevensey.

The British army had a regional structure: the units of the fyrd (the Anglo-Saxon army) was composed of men with their own piece of land. They were recruited and led by a local lord, whether a count, a bishop or a sheriff. Recruitment was rarely done nationwide: it had only happened three times in the previous two decades (in 1051, 1052 and 1065). The king also had personal guards, the housecarls. Some counts also owned a housecarl guard.

The English army was only composed of infantry. It is possible that some high-ranking fighters went to Hastings on horseback, but fought without their horse. The armour of the housecarls consisted of a conical helmet, a hauberk and a shield with the shape of a diamond or a disc. Most were armed with a Danish two-handed axe, but some fought with swords. The fyrdmen, who were not professional soldiers, wore lighter armours.

The Norman army was made up of infantrymen, horsemen, and archers. These soldiers did not come only from Normandy, but they also came from Brittany and other regions of France.

Norman soldiers wore cone-shaped helmets, with a metal band protecting their nose. Cavalry and infantry had shields. The infantry’s shields were usually circular in shape, made of wood with metal reinforcements. The horsemen’s shields had an almond shape and were armed with spears.  Riders and infantrymen were armed with straight, long, double-edged swords. The infantry also had javelins and spears. Archers were not dressed in armour for the most part.

The battle began at nine o'clock on Saturday, October 14, 1066, and lasted until evening.

The clash took place 11 km north of Hastings. The battlefield was bordered by two hills, Caldbec in the north and Telham in the south. It was a densely wooded area near a marsh. The path taken by the English army to join the battlefield is not known with certainty. The discovery of an important treasure buried near an old Roman road linking Rochester to Hastings in 1876 suggests that that might have been the route taken by Harold. However, it is also possible that his troops had followed another route.

The battle of Hastings began when the Norman archers shot - with little effect- the wall of English shields: since their opponents were in an elevated position, the arrows bounced off their shields or flew over their heads. Thus, William encouraged the spearmen to assault the Anglo-Saxons with spears, javelins, axes or even stones.

The beginning of the afternoon was marked by a pause in the fighting, which gave soldiers the time to eat and rest. During this time, William took the opportunity to develop a new strategy.

The Norman army pretended to flee the battlefield and then started to attack the English army.

This strategy caused the death of several housecarls.

Harold seems to have been killed near the end of the battle. However, sources contradict each other. In fact, the Bayeux Tapestry presents two scenes with the description “Here, King Harold was Killed": one of the characters is depicted with an arrow that pierces his right eye, whereas the other character is depicted as killed by the sword of an enemy rider. Both could be Harold unless both are representations of the king at different stages of his death. Tradition holds that it is an arrow in the right eye that killed Harold. The oldest written source presenting this tradition goes back to the 1080s. William of Malmesbury (an XII century historian) asserts that an arrow killed Harold at the very moment when a knight was wounding him. William of Jumièges proposes an even more improbable version of the facts: according to him, Harold would have died in the morning, during the first fights. Ian Walker, one of Harold’s modern biographers, believes that the king was killed by an arrow in the eye. However, he also admits the possibility that he was struck by a Norman knight while he was seriously wounded.

Harold's death deprived the Anglo-Saxons of their leader. Many of the soldiers fled, however, others fought until the end.

The causes of the Norman victory

Several factors help to explain the outcome of the battle. Many historians believe that Harold did not take the time to gather a larger army before rushing to Hastings, but there is no evidence that his numerical inferiority was a real handicap. The particular duration of the battle (a whole day) invalidates the thesis of an English army tired by its long march.

William had more experience than Harold, and the absence of English cavalry deprived Harold of more freedom in formulating his strategy.

The day after the battle, Harold's body was identified thanks to his armour and the marks on his body. According to a legend of the XII century, his face was unrecognisable, and it was necessary to appeal to his concubine Edith that identified him by searching for intimate marks on his body. Various traditions contradict each other as to the fate of his remains. The English corpses were abandoned on the battlefield, while those of the Normans were buried in a common grave whose location remains unknown.

The exact number of casualties on the battle is unknown.

Resistance movements against William the Conqueror continued for several years. Exeter was struck by revolts in 1067, Harold's sons attempted to reconquer the land in 1068, and an uprising ignited Northumbria the same year.

[3.] Stafford, P. (1989). Unification and Conquest: A Political and Social History of England in the Tenth and Eleventh Centuries. Edward Arnold.