Do you want to save dozens of hours in time? Get your evenings and weekends back? Be able to teach History of Medieval England to your students? 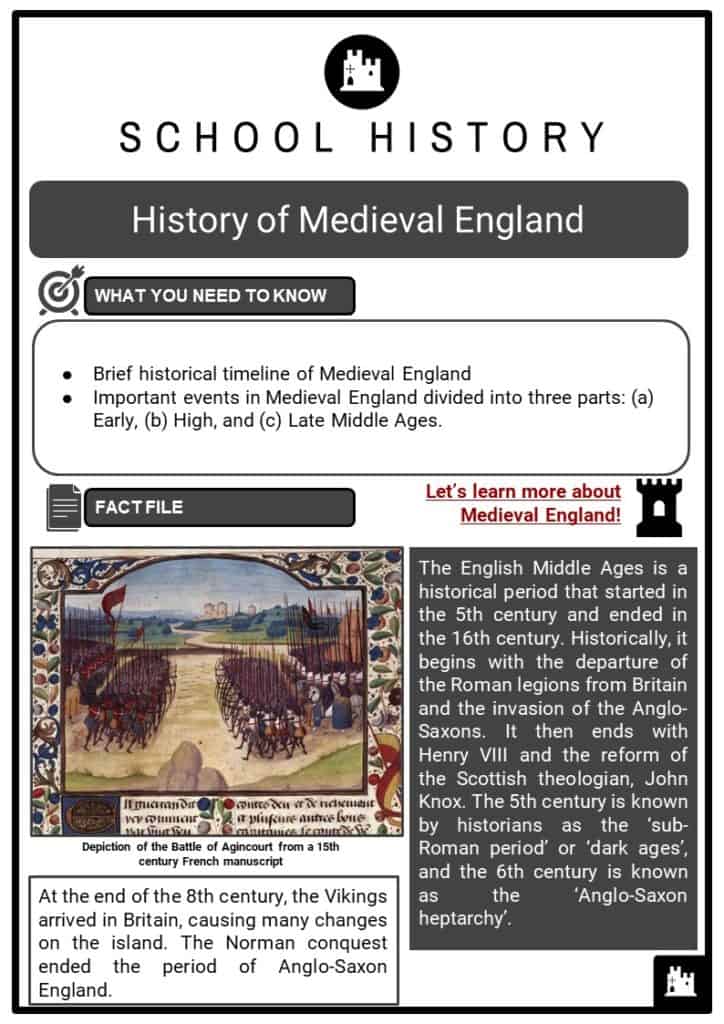 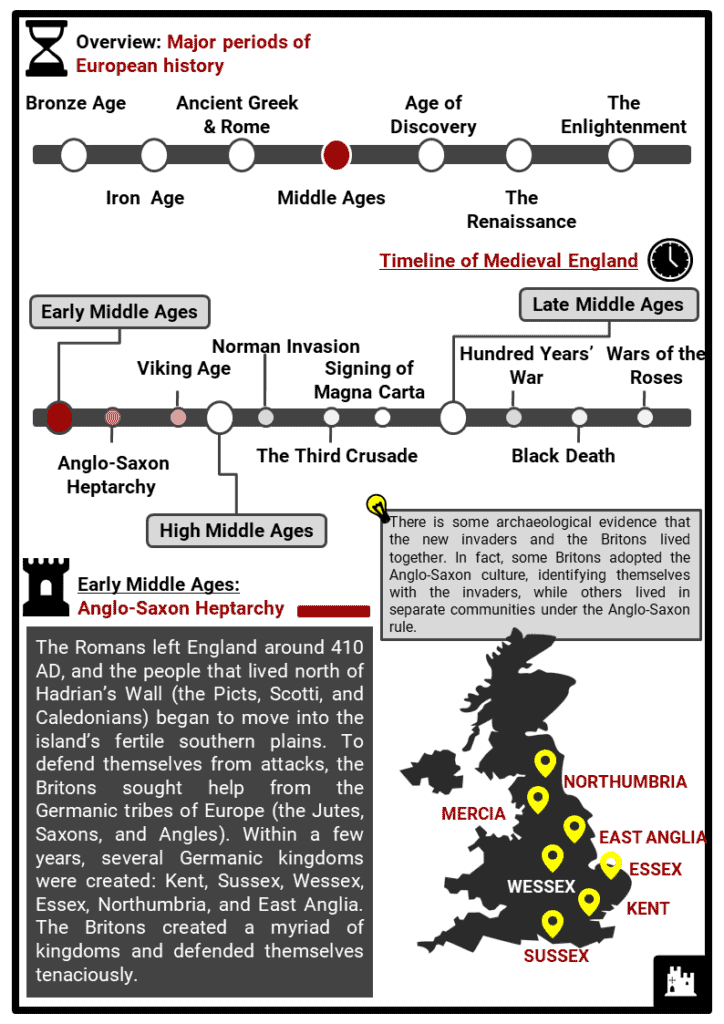 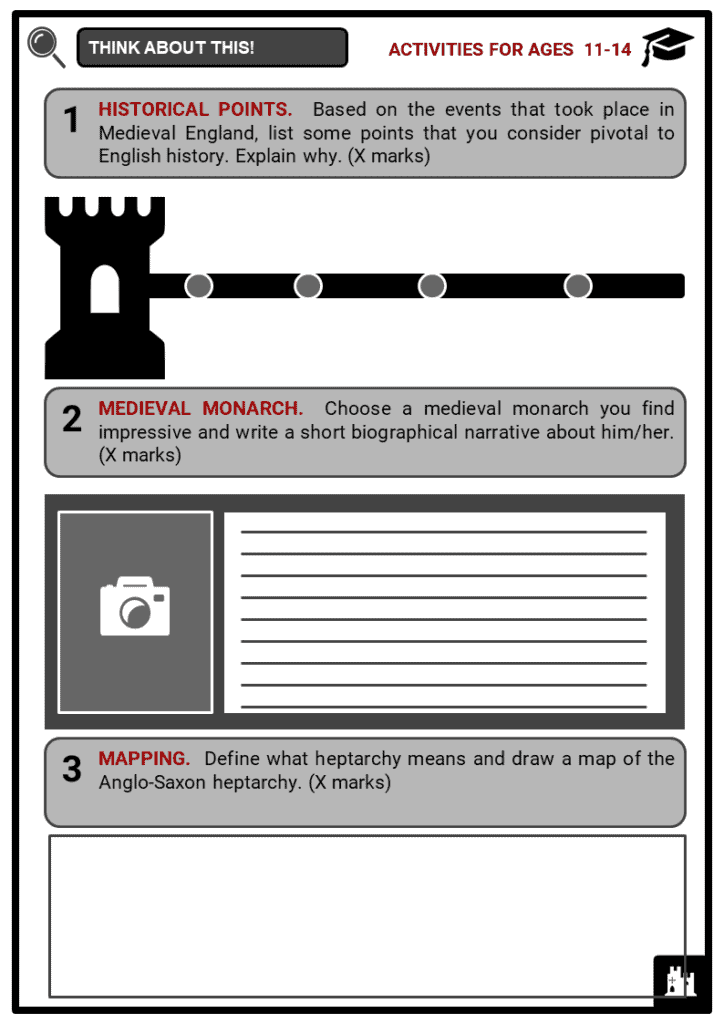 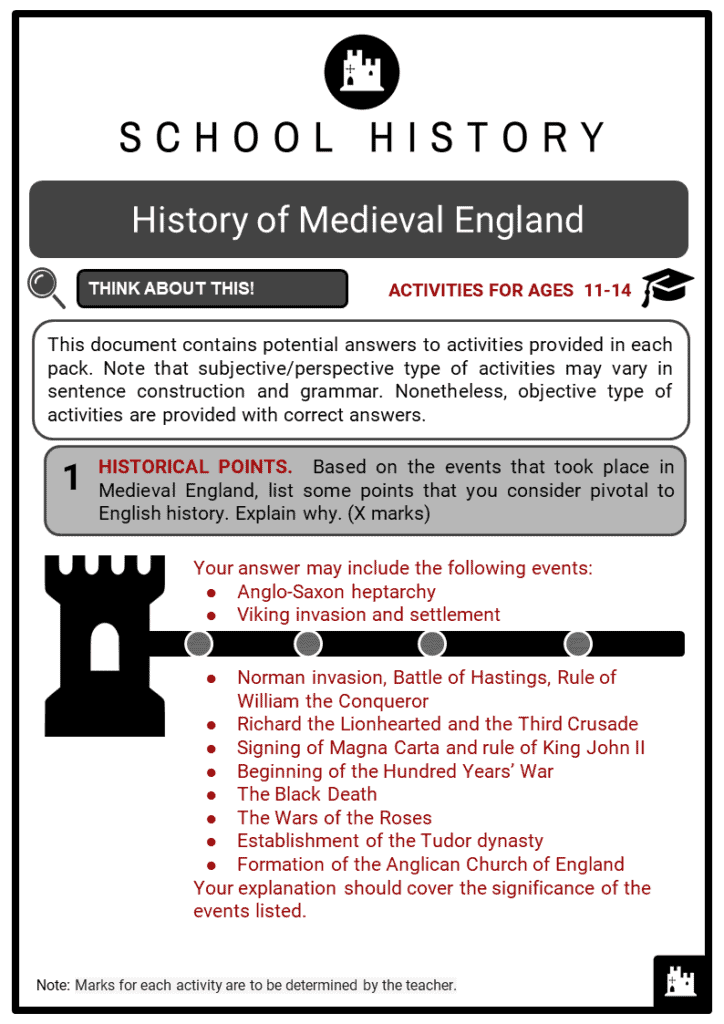 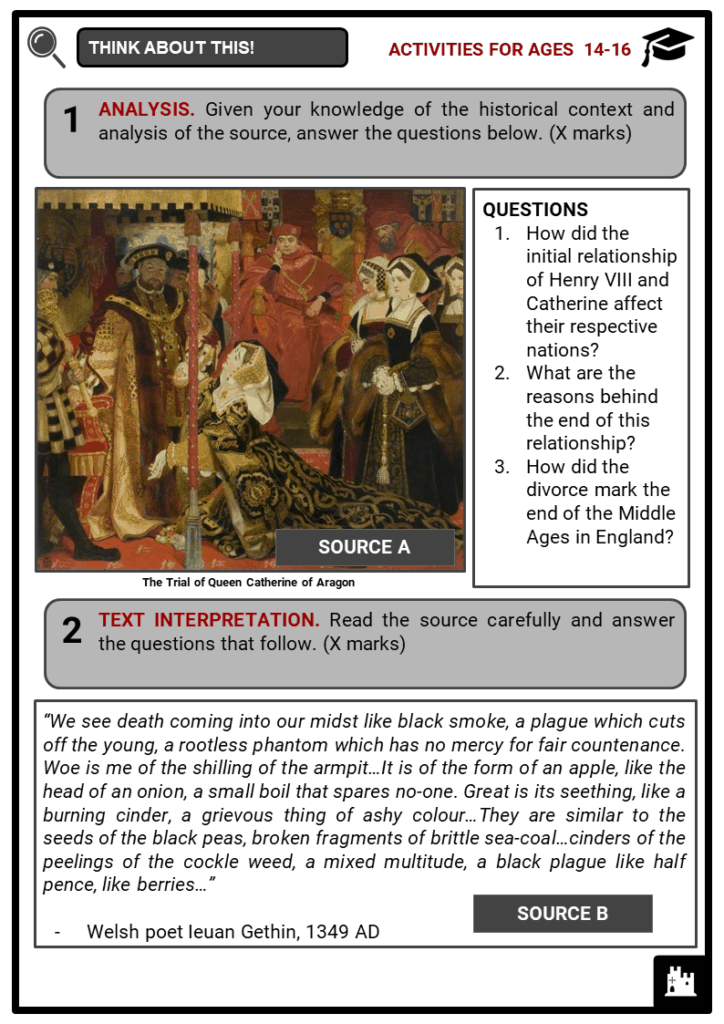 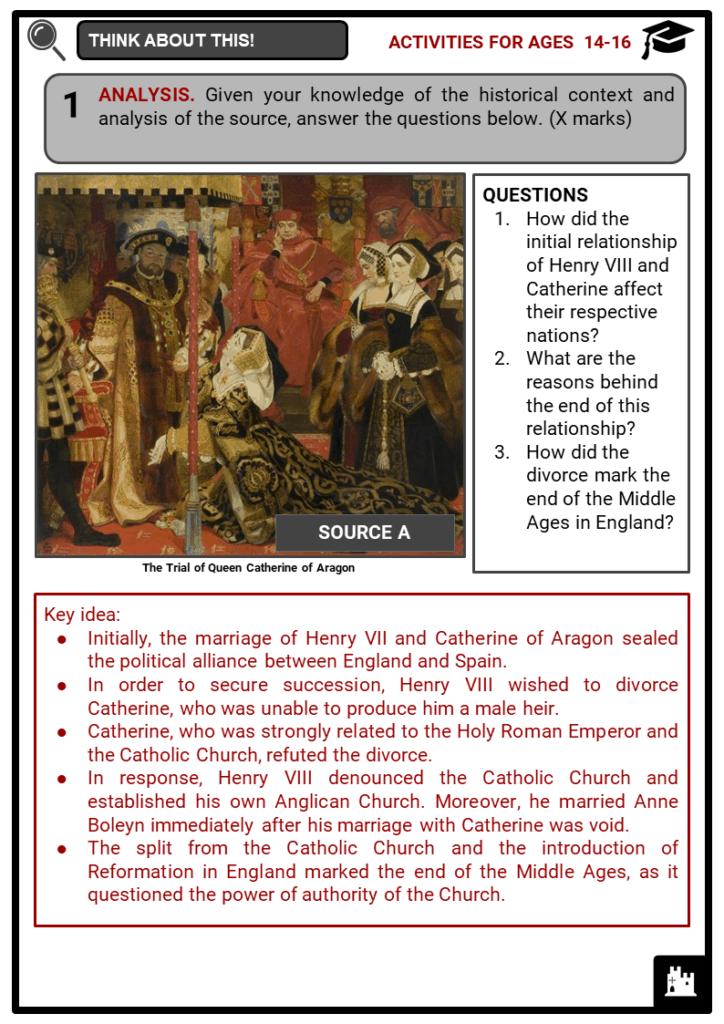 When the Romans left England around 410 AD, the peoples that lived north of Hadrian’s Wall (the Picts, Scotti, and Caledonians) began to push themselves into the fertile southern plains of the island. In order to defend themselves from attacks, the Britons sought help from the Germanic tribes of Europe (the Jutes, Saxons, and Angles). Within a few years, several Germanic kingdoms were created: Kent, Sussex, Wessex, Essex, Northumbria, and East Anglia. The Britons created a myriad of kingdoms and defended themselves tenaciously.

There is some archaeological evidence that the new invaders and the Britons lived together. In fact, some Britons adopted the Anglo-Saxon culture, identifying themselves with the invaders, while others lived in separate communities, under the Anglo-Saxon rule.

However, one cannot disregard the violence that dominated this period, which caused the death of a considerable number of Britons. Moreover, during this period, both the invaders and the indigenous peoples were affected by plagues. As a consequence, production diminished due to a decrease in the population. Furthermore, between the V-VI centuries, the climate changed by becoming colder and wetter. These events caused the British to migrate towards Brittany and Galicia.

Roman Britain actually came to an end in 407, when Constantine III, elected Emperor by the British troops, crossed the English Channel with the army leaving the island without defences. In 410, the Roman Emperor of the West, Honorius, informed the Roman Britons that his troops could no longer defend them. However, in the late V century, the Roman Britons asked the Roman consul Flavius ​​Aetius to rescue them against their invaders.

The Christianisation of Anglo-Saxon England began around 600, due to the influence of both Celtic Christianity and Roman Christianity.

The first archbishop of Canterbury, Augustine, assumed his office in 597, and in 601 he baptised the first Anglo-Saxon ruler, Ethelbert of Kent. The complete Christianisation of the island took place during the VII century thanks to the Celtic monks of Lindisfarne. The last great pagan ruler of the Anglo-Saxons was King Penda of Mercia, who died in 655. Also in the second half of the VII century, the date of the celebration of Easter was the object of conflict between Roman Catholicism and Celtic Christianity, an issue which had divided the country in Northumbria. The Christian Celts wanted a precise date to be set, while the church of Rome wanted to keep the use of the variable date. In 644 the dispute was resolved in favour of the church of Rome. The first British missionaries left for the continent in the VIII century.

The events of the Heptarchy

During the VII and VIII centuries, the various kingdoms of the so-called Anglo-Saxon heptarchy experienced alternate events, since various realms were attempting to win supremacy over each other. The kingdom of Northumbria, born from the union of the two minor kingdoms of Bernicia and Deira, was powerful. However, its power was dissolved during the second half of the VII century, following the military defeats inflicted by Mercia and the Picts.

The VIII century saw the supremacy of Mercia, and King Offa was acknowledged by Charlemagne as the ruler of all southern Britain. The growing power of the kingdom of Kent and the problems created by the minor kingdoms led to the end of the Marian domination.

The Anglo-Saxon Chronicle (793) reports the first Viking attack on Britain against the Lindisfarne monastery. In 794 the first attack on Iona took place. The arrival of the new invaders, in particular of their Great Army, profoundly upset the geographical, political and social structure of England. It is thanks to the Vikings that the kingdom of Alba was born. Today such kingdom corresponds to Scotland.

After a period of raids, the Vikings settled in England. Their settlement had a strong impact on English culture and language.

An important event of the IX century was the expansion of the Anglo-Saxon kingdom of Wessex, which, thanks to Alfred the Great, extended its dominion over other Anglo-Saxon realms and over Cornwall. Having defeated the Danish Vikings in 878 at Edington and having reconquered London in 885, Alfred the Great placed the northern border of his kingdom on the London-Chester line.

King Alfred the Great of Wessex died in 899. He was succeeded by his son, Edward the Elder, who, together with his brother-in-law, Ethelred of Mercia, set up an expansion program based on the construction of cities and fortresses. Upon the death of Ethelred, his wife Ethelfleda, Edward's sister, continued the expansion. When Edward died, his son, Aethelstan, ascended the throne of Mercia and, later, also on that of Wessex.

Aethelstan continued the family expansion program, becoming the first true ruler of what is now called England. During his wars of conquest, he defeated an army of Scots and Vikings at the Battle of Brunanburh. However, with Aethelstan’s successor, Edmund, Eadred and Edwy, the kingdom dissolved. Edgar the Peaceful finally reigned Aethelstan’s former territory: although it seemed he had consolidated the kingdom, it was only during the reign of his son Æthelred the Unready that England became a secure and consolidated country.

At the end of the X century, the Scandinavians renewed their interest in England. Aethelred lost his reign to Sweyn of Denmark but reconquered it after his death. Aethelred's son, Edmund II, died shortly thereafter, thus allowing Sweyn's son Canute to ascend the throne of England.

In 1066, Harold Godwinson ascended to the throne. He was subsequently defeated and killed by William the Conqueror in Hastings. William was crowned on Christmas day in 1066. His reign, however, was conditioned by many problems. In fact, after the battle of Hastings, many Saxons ended up enlisting in the army of the Byzantine Empire in order to fight against the Normans of Sicily and avenge what had happened in England.

Harold's defeat by William, who ascended the English throne, and the subsequent Norman conquest of England, marked a break in the history of this land, bringing with it many changes. The new sovereign ordered the compilation of the Domesday Book, in which both the populations and the properties were registered and taxed. 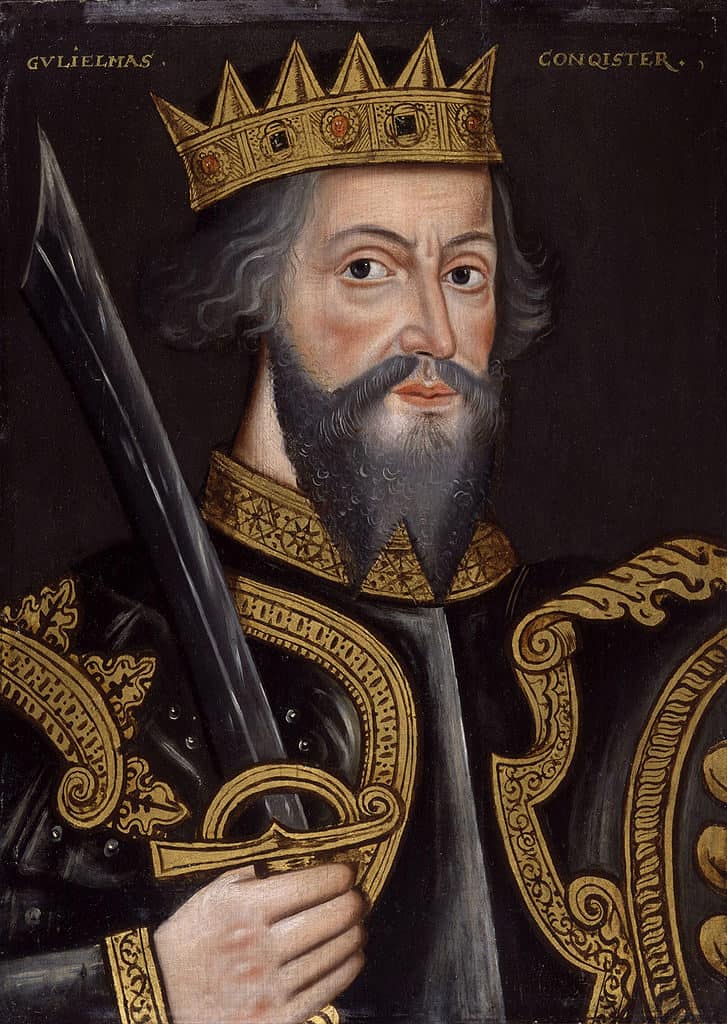 During this period, England experienced a civil war, insurrections, court intrigues, and many other wars even outside its borders. The economy of the time was based on the production and export of wool to Europe, where it was processed. In fact, only in the XV century, England developed its own textile industry.

During the weak reign of Stephen I (1135 - 1154), the situation of the English kingdom gradually deteriorated, oscillating between the civil war and the barons’ feudal power. This instability was followed by raids of Scottish and Welsh raiders. Stephen also came into conflict, for dynastic reasons, with his cousin, Empress Matilda, who, from France, invaded England in the autumn of 1139 together with her husband Geoffrey of Anjou and her half-brother Robert of Gloucester. Stephen I was captured and his reign came to an end.

Matilda became queen, but entered into conflict with her vassals and was expelled from London. The result was a period of instability and a civil war that ended in 1148 when Matilda returned to France. Stephen returned to the throne, reigning until his death in 1154. After the death of his heirs, Stephen agreed with Matilda, recognising as his successor her son, Henry of Anjou, the future Henry II, whose reign marked a return to monarchic centralism (to the detriment of the feudal power of the barons and the legislative power of the Church).

Henry II’s successor, Richard the Lionheart, was occupied in wars abroad: he participated in the Third Crusade and defended his French possessions from the attacks of King Philip II of France. 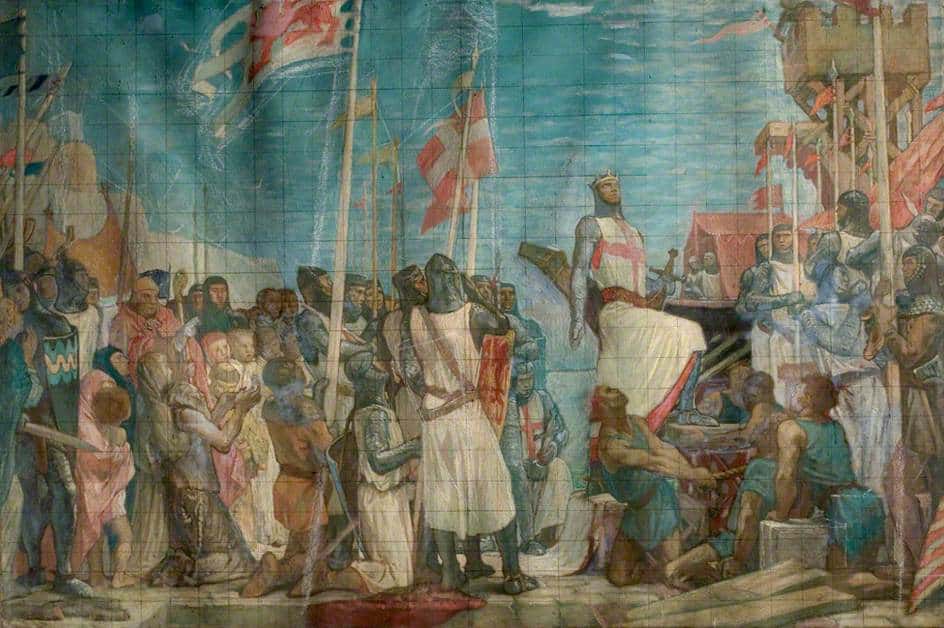 Richard’s successor, John, lost many territories in France and was unable to cope with the nobles and the church. Therefore, he was eventually forced to sign the Magna Carta, which imposed major limits on the sovereign's personal power. His son, Henry III, ascended the throne at just 9 years old. His kingdom was characterised by many revolts and civil wars, often caused by the incompetence and bad government of the central power.

The kingdom revived with King Edward I, who restored power to the central government, conquered Wales and attempted to put Scotland under his control. More disastrous were the reigns of his sons Edward II and Edward III. The latter was forced to grant lands to noble families, thus increasing their power.

Meanwhile, in 1349, England was struck by an epidemic of bubonic plague, which was already raging in Europe. It killed one-third of Britain’s population. The kingdom was also engaged in wars against the Welsh, the Irish, the inhabitants of Cornwall, and France (who was allied with Scotland, in the Hundred Years War). During this war, England won some important battles, including those of Crécy and Agincourt. Moreover, the future King of England, Henry V, finally suppressed the revolt led by the Welsh Prince Owain Glyndŵr (1412). This event marked the end of the great Welsh rebellions against the English rule.

It was in this period that the power of the nobles increased once again, thus creating new problems for the Crown, with many suitors coming forward from the ranks of the nobility.  From 1422, the situation precipitated, during the weak reign of Henry VI, who was plagued by mental instability: a civil war known as the War of the Two Roses broke out, and greatly weakened the power of the Crown, which was subsequently restored with Edward IV.

The War of the Two Roses ended at the Battle of Bosworth Field (1485) with the victory of Henry Tudor, who ascended the throne with the name of Henry VII. During his reign, two new pretenders to the throne came forward: the first, Lambert Simnel, was defeated at the Battle of Stoke Field, while the second, Perkin Warbeck, was executed in 1499. 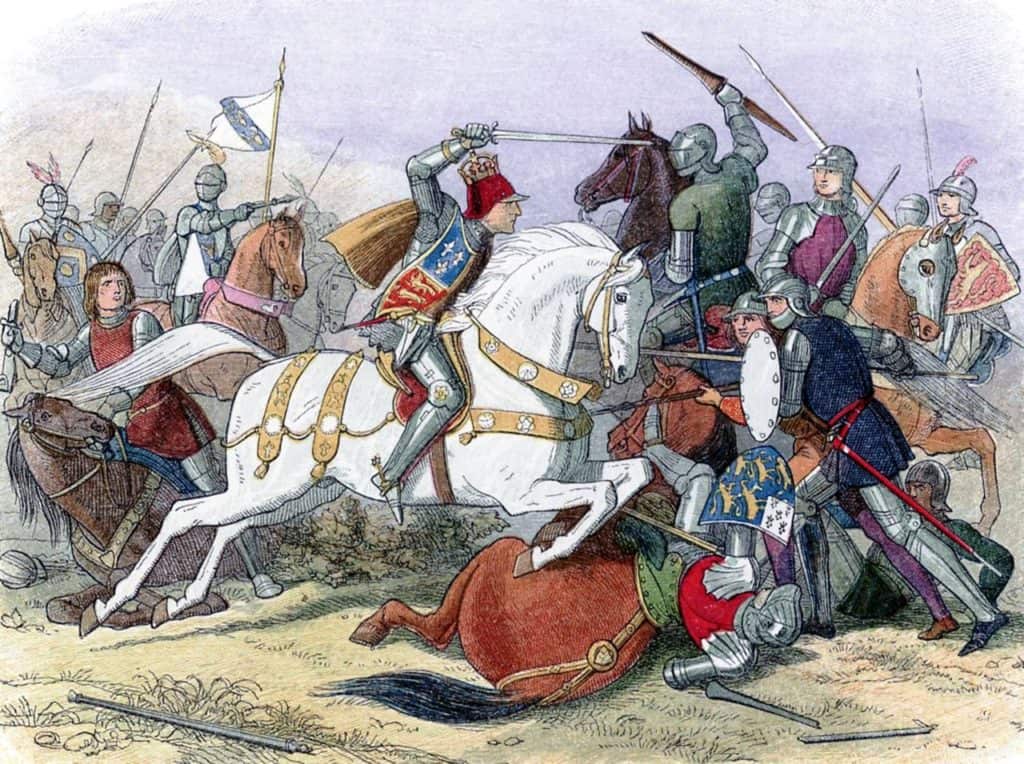 In 1509 Henry VIII became king of England. He entered into conflict with the Catholic Church because he wanted to divorce his wife, Catherine of Aragon. Henry was not a convinced Protestant, but for political reasons, he allowed a schism, which led to the birth of the Anglican Church. Meanwhile, even in Scotland, the church was hit by the Protestant Reformation with John Knox. These two events marked the end of the English Middle Ages.