Do you want to save dozens of hours in time? Get your evenings and weekends back? Be able to teach Lifestyle of Medieval Peasants to your students? 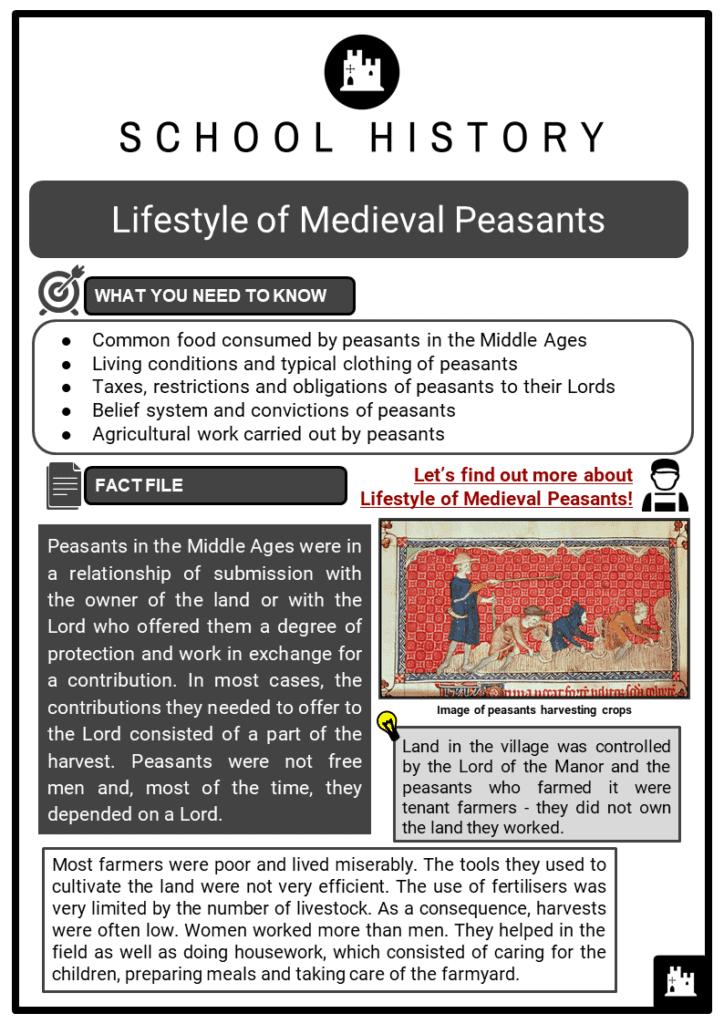 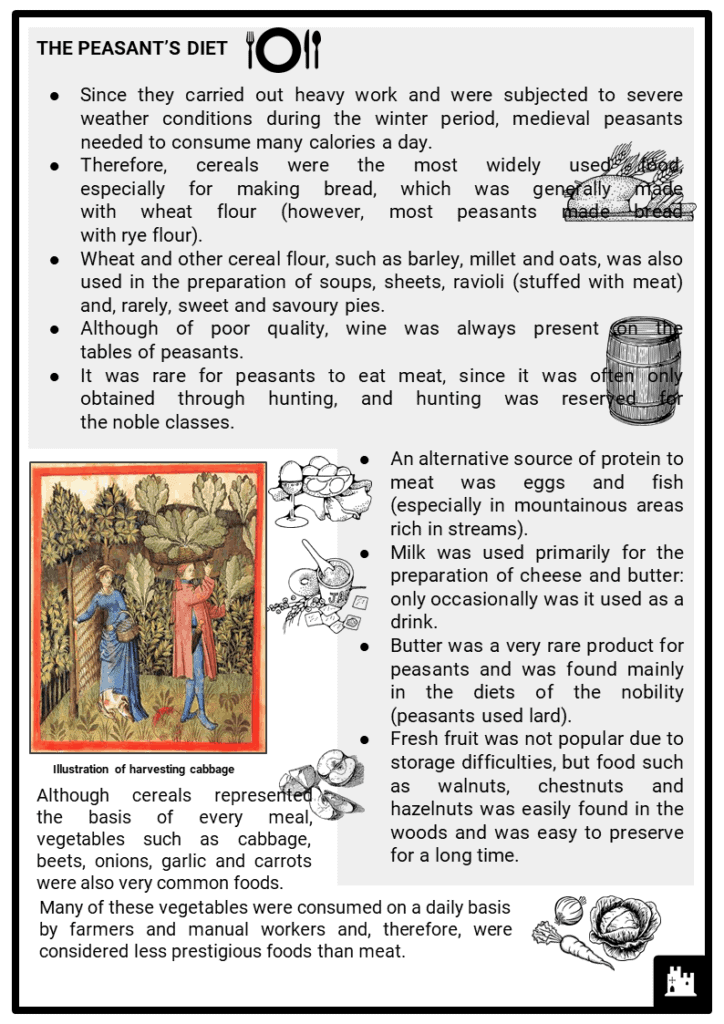 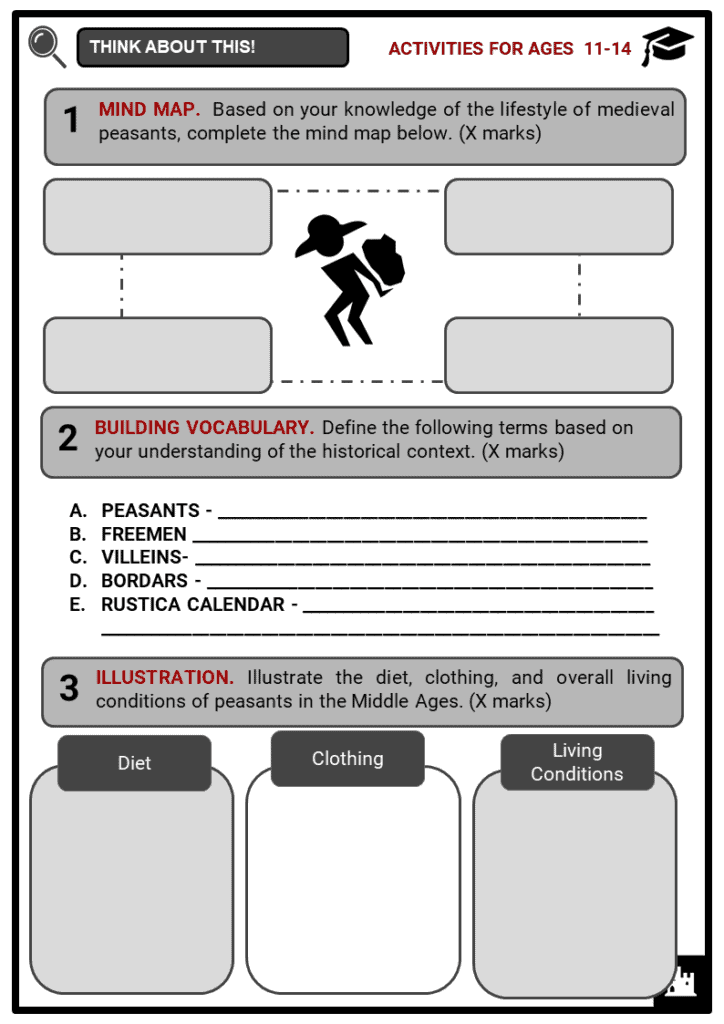 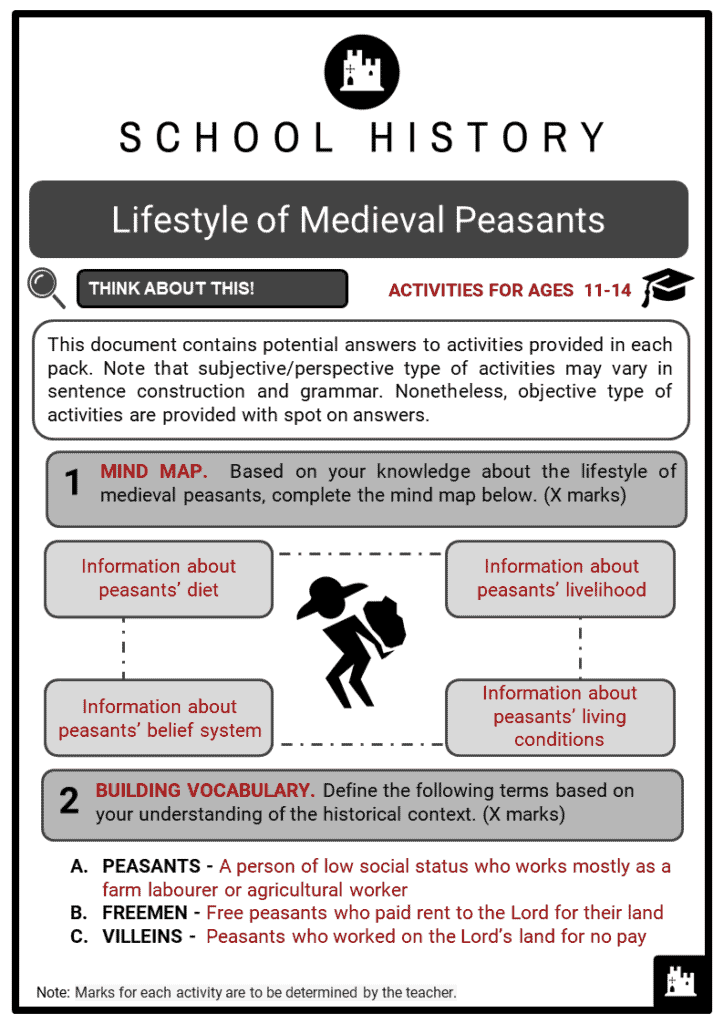 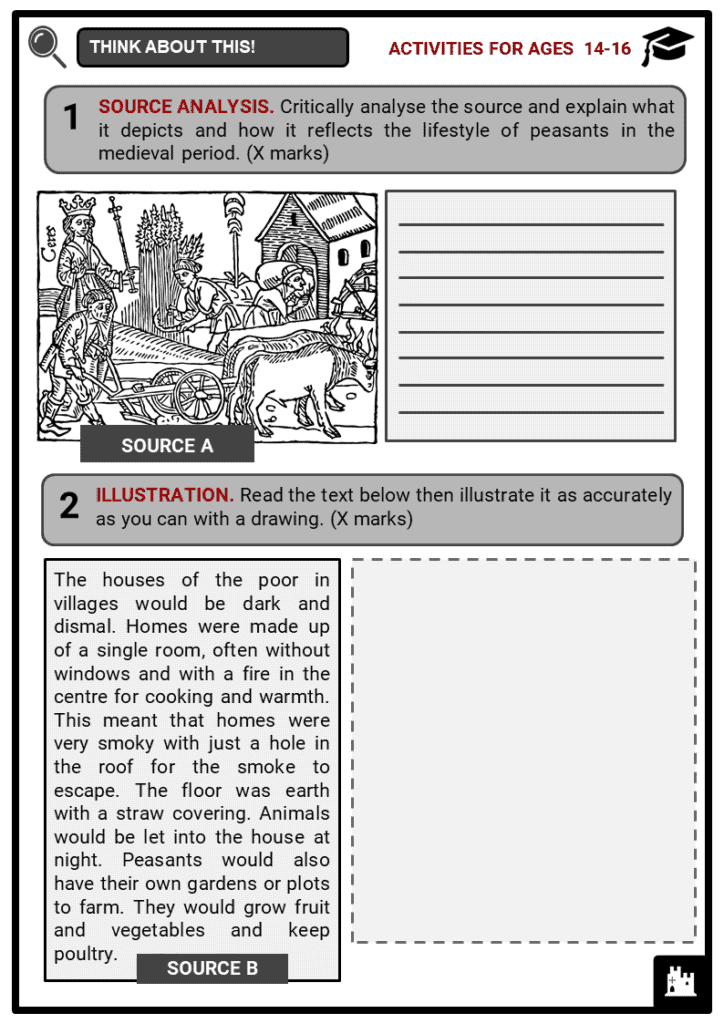 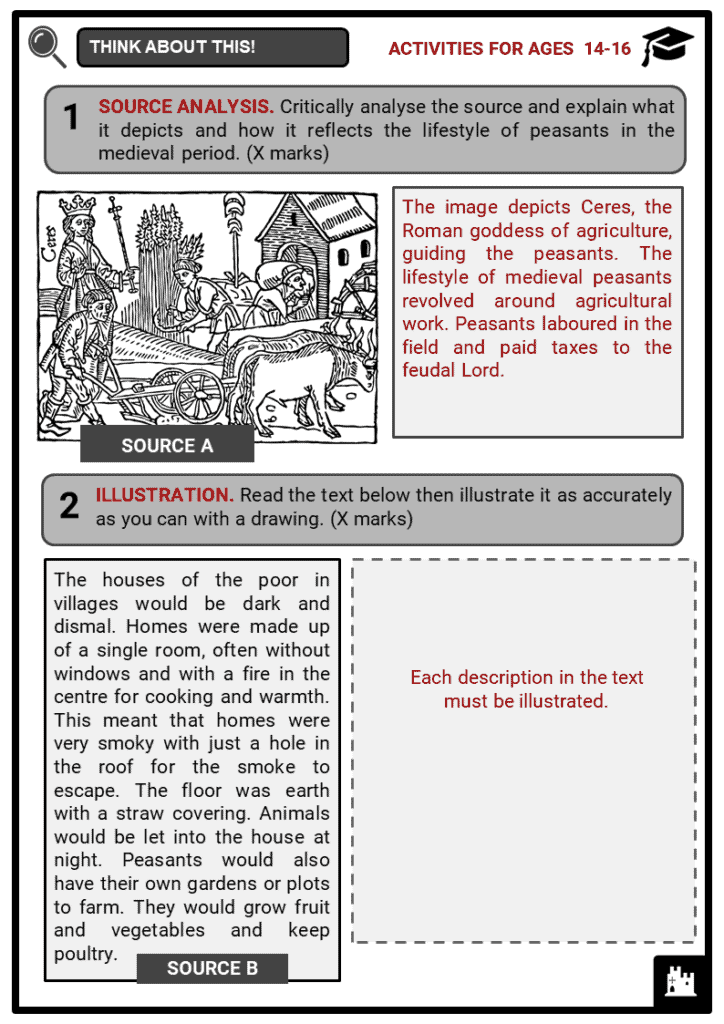 Since they carried out heavy work and subjected to severe weather conditions during the winter period, Medieval peasants needed to consume many calories a day. Therefore, cereals were the most widely used food, especially for making bread, which was generally made with wheat flour (however, most peasants made bread with rye flour). Wheat and other cereal flour, such as barley, millet, and oats, was also used in the preparation of soups, sheets, ravioli (stuffed with meat) and, rarely, sweet and savoury pies. Although of poor quality, wine was always present on the tables of peasants. It was rare for peasants to eat meat, since it was often only obtained through hunting, and hunting was reserved for the nobles classes.

An alternative source of protein to meat was eggs and fish (especially in mountainous areas rich in streams). Milk was used primarily for the preparation of cheese and butter: only occasionally was it used as a drink. Butter was a very rare product for peasants and was found mainly in the diets of the nobility (peasants used lard). Fresh fruit was not popular due to storage difficulties, but food such as walnuts, chestnuts, and hazelnuts was easily found in the woods and was easy to preserve for a long time.

The peasants' homes were simple. Since houses made out of stone were expensive and, therefore, rare, houses made out of wood or clay mixed with straw were much more common amongst the peasant class. People and animals lived under the same roof, especially during the winter.

Their homes had a room where meals were consumed and where the family met. The oven was placed outside, while another building was used as a warehouse or a stable. All the buildings were characterised by dirt floors covered with straw and did not always have windows. 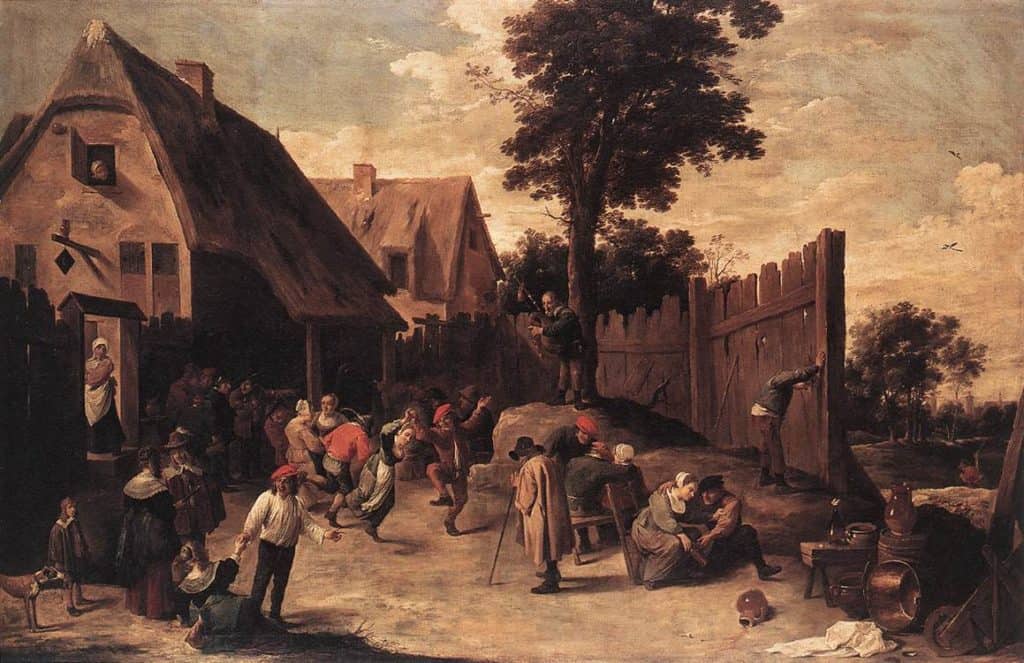 Peasants were subject to many taxes, restrictions, and obligations towards their lord.

For example, they were required to pay a tax in order to fish. Moreover, in some periods of the year, they were obliged to work for their lords without being paid (such duty was called corvées).

The life of the peasants was often very hard and they fell victim to brigands and raids as their lords were often fighting against other lords or on the king's campaigns.

Sanitary conditions were very bad, which attracted parasites, lice, fleas, and mites. Due to poor nutrition, diseases such as leprosy, malaria, and hyperthyroidism were endemic. In an age of recurrent epidemics and disease, and with the presence of doctors rare in the countryside, mortality was high.

The typical clothing of peasants consisted of a shirt, a tunic, a cloak, trousers secured by a belt at the waist, and shoes tied over the ankle or high boots (the use of wooden clogs was also common). Clothes were grey or dark in colour. Women dressed wearing a shirt or a low-cut sleeveless robe, a skirt, a cloak, a veil, stockings and shoes (often wooden clogs). Women were engaged in various housework activities such as caring for the children, spinning and weaving, or taking care of farm animals.

Usually, farmers had a work outfit and a party outfit. The same garment was also reused by turning it into clothes for children.

In rural communities, saints were invoked for their thaumaturgical abilities.

In the countryside, people believed in the powers of witches. They were often just women who knew about herbal remedies that dated back to the pre-Christian past, and knew the recipes for dealing with fertility, contraception, and abortion, and healing people and animals in the communities where they lived. Since superstition was also commonplace, witchcraft and the cult for Diana - goddess of the woods and the wild world - certainly played an important role in the lives of rural peasants. Sanctuaries in her honour were built in outlying places.

It was believed that witches had the gift of metamorphosis and that they could transform into cats - the animal associated with the devil. Others were convinced that they could turn into werewolves that wandered at night in search of prey.

Among the most deeply-rooted convictions was the belief that these women had a certain power over the elements of nature and that, with simple gestures, they could generate storms, hail, and lightning; they could also make animals sterile, women infertile and men impotent.

The ‘witch’ stereotype was created when the Church started condemning rural traditions from the second half of the 14th century, which set off witch hunts. As a consequence, the Middle Ages was characterised by progressive marginalisation of the peasant world.

In the early Middle Ages’ literature, peasants were depicted as superstitious pagans: they were regarded as socially dangerous, miserable, illiterate, ignorant, thieves with rough customs.

The farmers' jobs were dictated by the natural calendar and consisted of ploughing, sowing, pruning, harvesting of fruits (apples, pomegranates, grapes, mulberries, etc.) and cereals (wheat and rye), pressing, production of wine and oil, wheat threshing and weeding.

There also existed numerous migrant peasants who worked in the countryside and gathered sheep’s wool. Such activity soon became a major industry in Europe with the breeding of different types of sheep.

Thanks to the innovations and the continuous activity of the Benedictine monks, the peasant world saw some new introductions. These included new crops that came from distant lands, new cultivation techniques and new means that alleviated the workload, such as the ax, double-bladed forceps (to eradicate roots), the sickle with a short handle, the triangular harrow, a rigid collar attached to a horse, the long-handle sickle, and the triple-blade ax.

The situation of peasants in the Middle Ages worsened in times of poor or no harvest. This could be due to raids, famine, or natural disasters.

The Rustica calendar that dates back to the 15th century, represented the primary agricultural work that peasants had to carry out each month.

January: the peasants cured the ditches.

February: they nourished the land with fertiliser by using a hood and a spade.

March: they cut the vines with a billhook.

April: they sheered the sheep.

May: They continued the work for the next harvest while the Lord hunted.

June: They harvested wheat and hay with a scythe.

July: They reaped cereals with a sickle.

August: They treated the cereals with a flail.

September: This was the sowing period in which they ploughed and sowed seeds.

October: They trod the grapes with their feet to extract the juice that would give them wine.

November: They fed acorns to the pigs to fatten them.

December: They slaughtered the pigs. 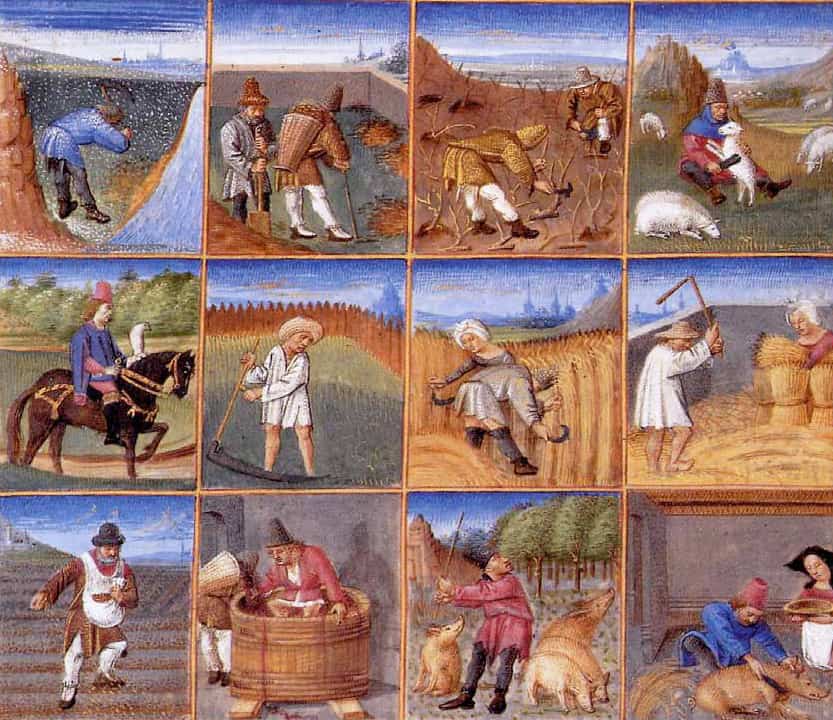 In essence, peasants worked hard during the day and lived in accordance with the rhythm of the sun: their tasks were performed from sunrise to sunset. The work was much lighter at certain times of the year: in winter, the cold, the snow, the freezing of the earth and the short duration of solar illumination allowed them to stay safe in their homes. This period of the year was an ideal time for them to reorganise and maintain their tools.

Peasants did not work on Sundays. Rather, they went to the village to carry out their religious practices and meet their friends.

Once the peasants had harvested their land, the owner had to allow animals and other peasants to come to graze. This allowed landless peasants to feed small livestock (goats and sheep). Moreover, the excrements deposited by the animals enriched the soil. There also existed common land, which was generally not cultivated. Such land could be used by several peasants if the need arose.

[1.] BBC (no date). Everyday Life in the Middle Ages. Available from: https://www.bbc.com/bitesize/guides/zm4mn39/revision/6