Do you want to save dozens of hours in time? Get your evenings and weekends back? Be able to teach The Crusades to your students? 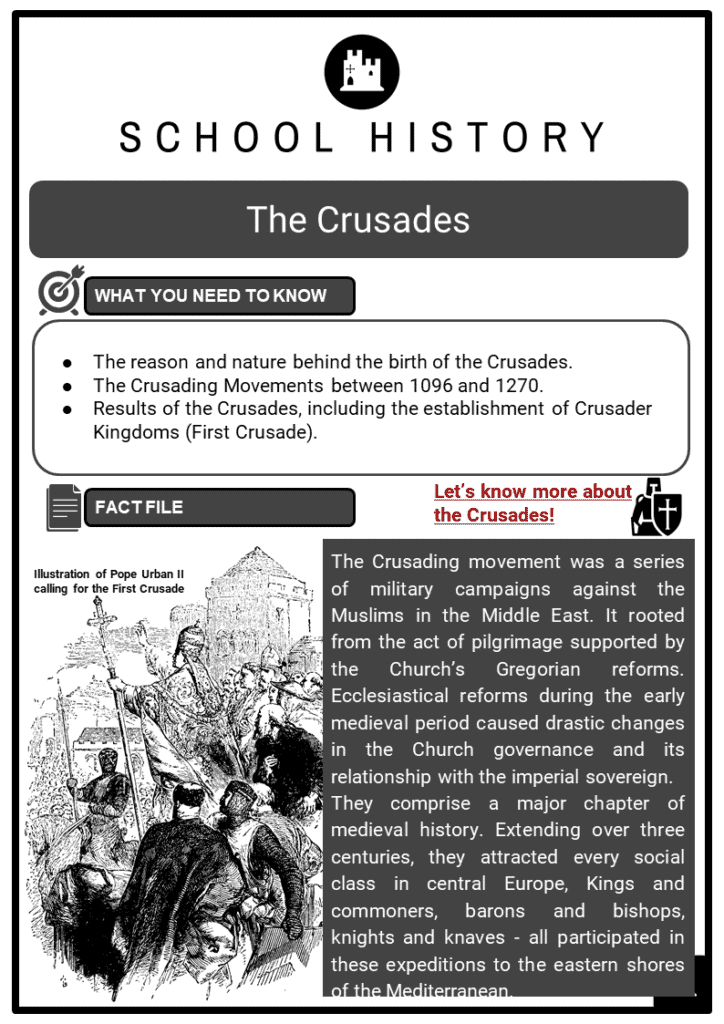 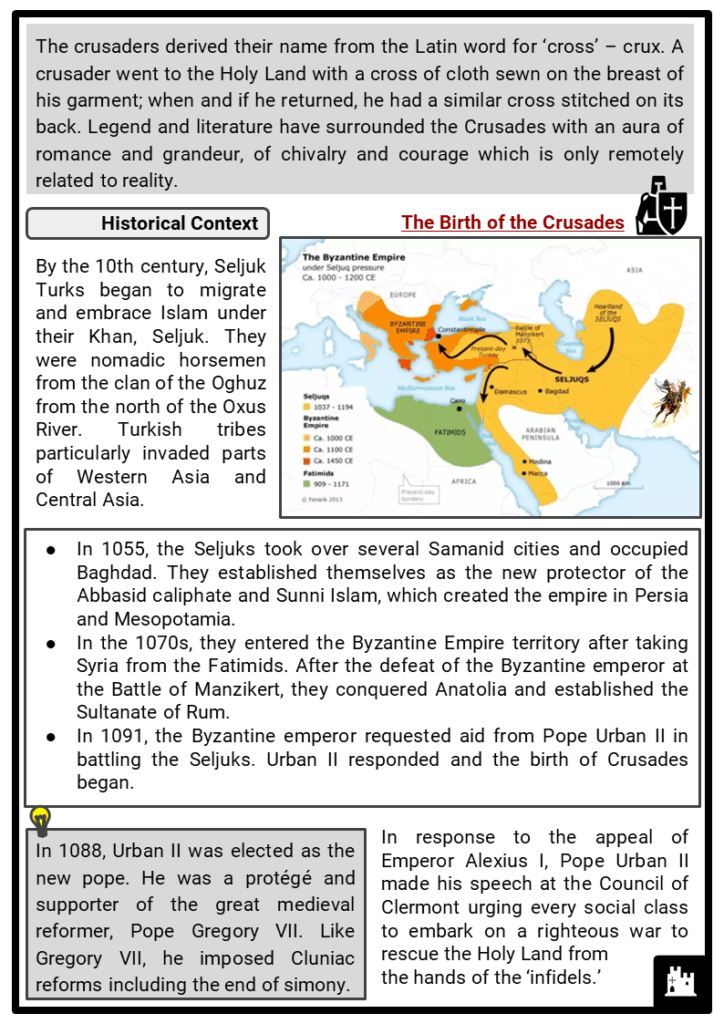 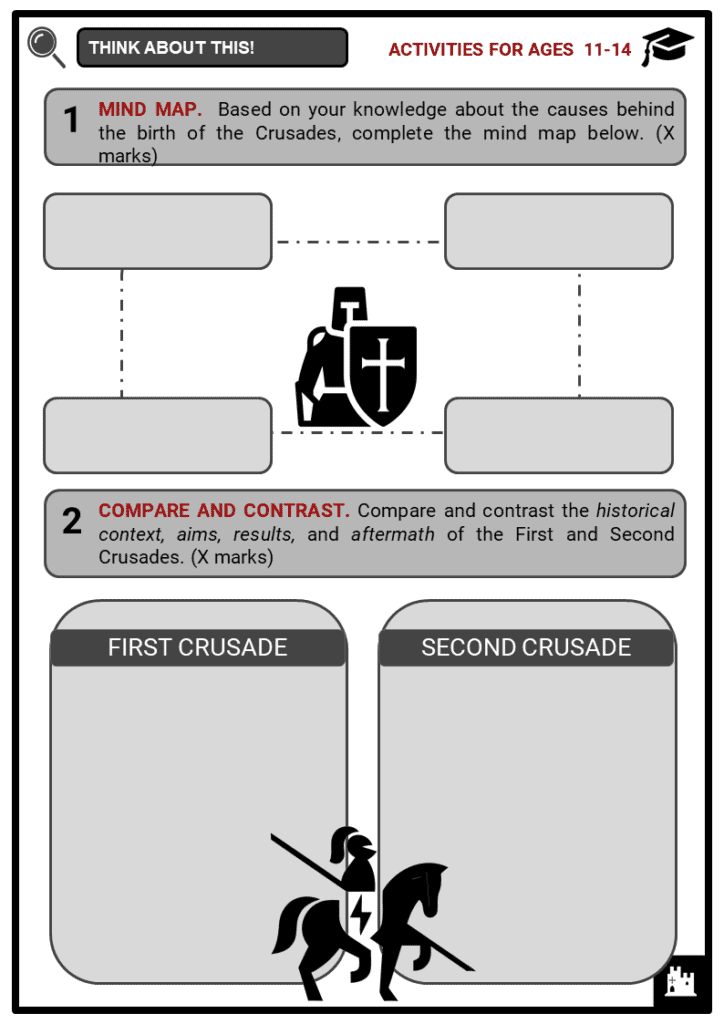 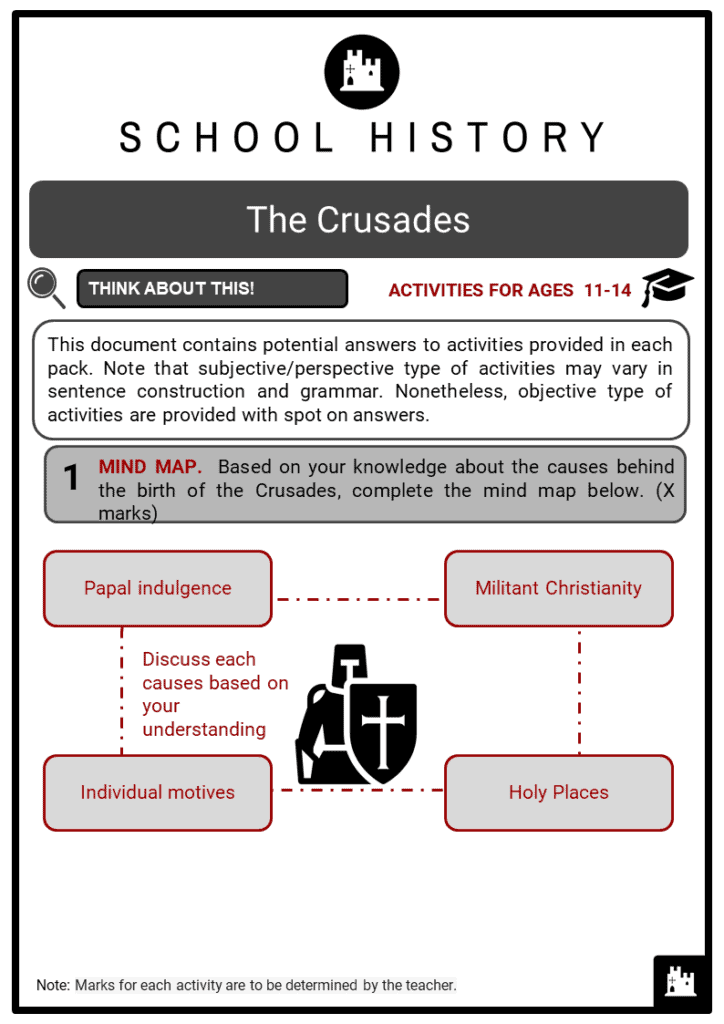 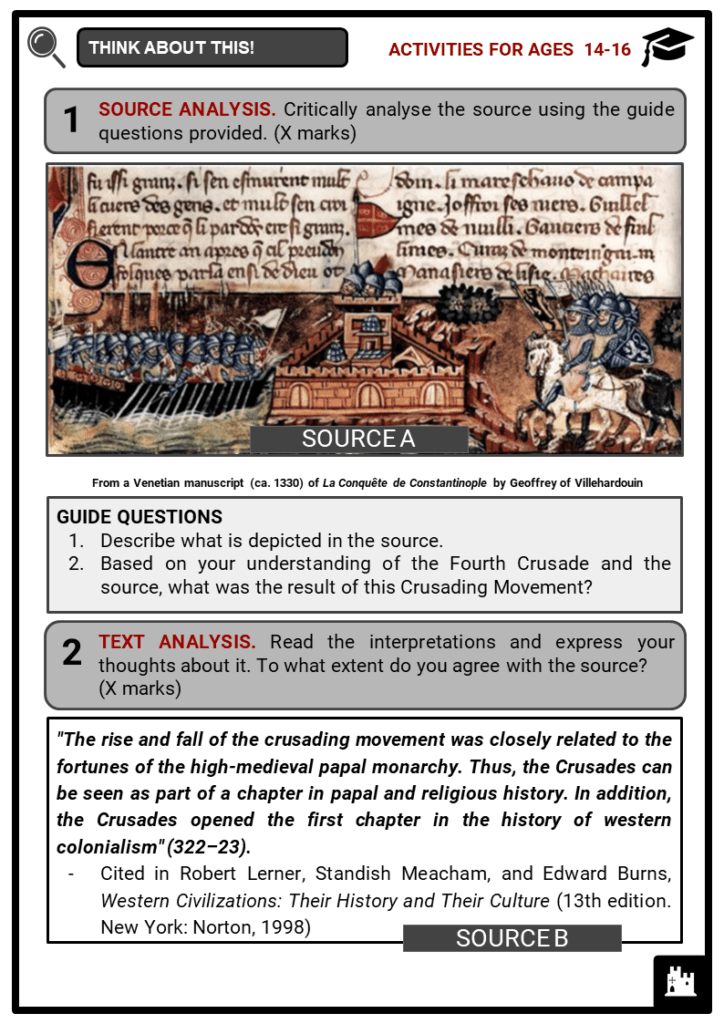 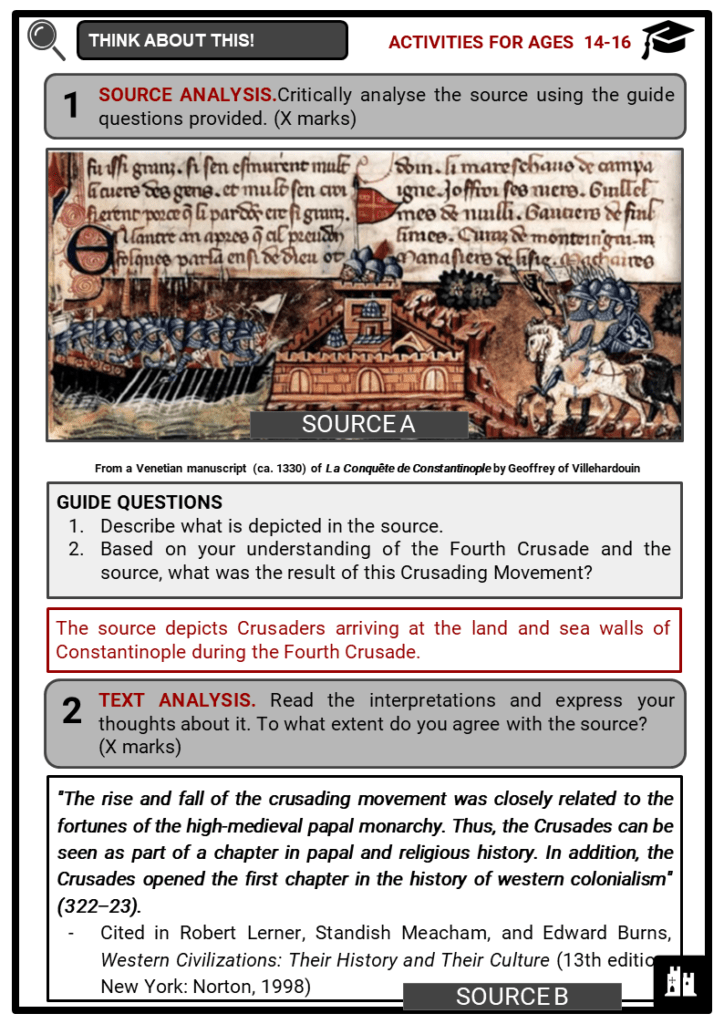 The beginning of the Crusades

The Crusades were begun by Pope Urban II at the Council of Clermont in 1095. He was a Cluniac Reform pope and during many sessions of the council had discussed various evils which had hindered the spiritual working of the church and its clergy. On the last day of the council, Pope Urban proclaimed the Crusade against the infidel Muslims to an audience which apparently numbered several thousand secular lords and clerics. In his speech, Pope Urban called for a holy war in the Holy Land. He vividly described the numerous attacks upon the Christian pilgrims visit these centres. He also spoke of the military threat to the fellow Christians of Constantinople. He urged his Christian listeners to take up the holy cause, promising to all those who went remission of sins and to all who died in the expedition immediate entry to Paradise. His speech was keeping with the spirit of the religious revival of the XI century.

Then Urban changed the approach of his speech. He dwelt upon the feudal love of tournaments and warfare and urged the barons to give up their unrighteous wars in the West for the holy war in the East. He also hinted at the possibility of obtaining feudal fiefs, lands, wealth, power, and prestige. This speech of Pope Urban II at Clermont was one of the most influential speeches ever made. When he finished, his listeners shouted ‘Deus Volt’ (God wills it). This became the battle cry of the crusaders. Immediately, thousands pledged themselves to go on the Crusades.

The idea of ​​the crusade originated when the Byzantine emperor Alexios I Komnenos appealed to the West to help him repel the Turkish invaders advancing in Anatolia. In response, Urban II called the Council of Clermont and, on November 25, officially declared the crusade. An additional objective later became the main objective of the expedition: the Christian reconquest of the sacred city of Jerusalem, the liberation of Eastern Christians from Muslim rule.

The official crusade conducted by many European princes was preceded by an unofficial popular crusade, in which a number of peasants, led by Peter the Hermit, carried out massacres among the Jewish population in Europe before arriving in Anatolia where they were heavily defeated by the Muslims. In 1096, the official crusade began and many European Catholic nobles such as Raymond of Toulouse, Godfrey of Bouillon, Boemondo of Taranto, Baldwin of Flanders, Robert of Normandy, Hugh of Vermandois, Stephen II of Blois, Robert of Fiandra and Tancredi of Altavilla, took part in the Crusade. During the expedition, the nobility, knights, peasants, and servants from many regions of Western Europe traveled by land and by sea, reaching first Constantinople and then Jerusalem. The Crusaders took Nicaea in 1097 and conquered Antioch the following year. The Crusaders made their arrival in Jerusalem and besieged and conquered age city in July 1099.

Following their conquests, the crusaders founded the Crusader states: the Kingdom of Jerusalem, the county of Tripoli, the Principality of Antioch and the County of Edessa. This was contrary to the wishes of the Byzantines of the Christian East who expected the return of lands taken from the Muslims. After the revival of Jerusalem, most of the crusaders considered their pilgrimage concluded and returned home. This left the Christian and Greek kingdoms vulnerable to attacks by Muslims who aimed to recapture those reborn lands.

When news of the capture of Odessa by the Muslims reached Europe, St. Bernard of Clairvaux virtually persuaded Emperor Conrad III of Germany and King Louis VII of France to undertake the Second Crusade. The two sovereigns consciously avoided one another and neither accomplished much. The Crusade was a complete failure. Even worse, it gave Roger of Sicily an excuse to attack the Byzantine holdings in Greece and Aegean.

In contrast to the disunity among the Christians, the Arabs were being united by the extraordinary leader Saladin. Through his efforts, the Muslims from Baghdad to Egypt were united into a single state, and it was easy for Saladin to defeat the disunited Christian forces. In 1187 he captured Jerusalem and subsequently the rest of the kingdom. Except for a few coastal cities, the Holy Land now was in his power. The catastrophe called forth new demands for a Crusade throughout Western Europe.

The leaders of the Third Crusade were the Emperor Frederick I Barbarossa of Germany, King Philip Augustus of France, and King Richard the Lion-Hearted of England. Emperor Fredrick was drowned in Asia Minor, and few of his men reached the Holy Land. The other two leaders arrived with their armies, but since they were rivals in Europe, they soon quarrelled in the holy land as well. Philip Augustus feigned illness and returned to France, scheming to win back the duchy of Normandy from Richard’s control.

Richard the Lion-Hearted thereafter was the sole leader of the Third Crusade. His exploits gave rise to the legends of the Lion-Hearted, and, through them, Richard acquired a posthumous prestige far greater than he deserved. More showman than statesman, a brave knight but a bad king, he has been given his proper place in history by Sir Winston Churchill: ‘his life was a magnificent parade which, when ended, left only an empty plain’. Richard did regain Acre and Jaffa for the Christians, but that was all. The agreement he finally reached with Saladin gave pilgrims free access to Jerusalem and little else. The city itself and the adjoining kingdom, except for some coastal cities, were still subject to the same law - that of the Koran, not the Holy Bible.

Initiated by Pope Innocent III, the Fourth Crusade was largely composed of Frenchmen and Venetians. Their experiences were recorded by the French leader and historian, Geoffroi de Villehardouin, in his Conquest of Constantinople, the first great history in French prose.

Innocent was greatly disappointed by the events of the Crusade. In the original agreement, the Venetians had promised to transport the French crusaders to the Holy Land and to provide them with military equipment and provisions.

When the Frenchmen arrived in Venice, they were too few to pay for the contracted amount; only twelve thousand of the expected thirty thousand warriors came. The Venetians who had constructed ships and had assembled provisions for the original number proposed that the Frenchmen make up the deficit by assisting them in attacking the seaport of Zara. Ruled by the Christian king of Hungry, Zara was the greatest Adriatic rival of Venice. To the Venetians, this was reason enough for an attack, and they cajoled the French into helping them make it. The original plan of the crusaders to use Egypt as a military base for an attack on Palestine was postponed.

When Pope Innocent heard of the Venetians’ proposal, he prohibited the expedition; when it was undertaken in spite of him, he excommunicated all participants. Nevertheless, the coalition of crusaders in November 1202 assaulted, captured, and thoroughly pillaged Zara in a brief, brutal campaign.

Following the sack of Zara, the Venetians had another plan. They suggested that the expedition now direct its efforts against Constantinople and restore the dethroned Byzantine emperor, Isaac II Angelos. They made a good case for the diversion: if the Crusade restored the deposed emperor, he would guarantee the manpower which the French had failed to furnish, money, and supplies for the Egyptian expedition.

Pope Innocent again issued a reprimand to the crusaders, which they again disregarded; they captured Constantinople on April 13, 1204, and spent the next three days pillaging it. Their seizure of Zara had been uncalled for; their sack of Constantinople was unparalleled. They ransacked and raped, sparing neither place nor church, noblewomen nor nun. Once the Byzantine capital had been ravaged and ruined, the crusaders restored order. Since both the deposed emperor and his son had died in the interim, the crusaders established a new Latin empire and selected the Count of Flanders for its ruler. This empire lasted until 1261, but it never ruled all Byzantium; it comprised most of the land in Thrace and Greece, where the French barons were rewarded with feudal fiefs. For their contributions, the Venetians obtained the harbour rights in Constantinople plus a commercial monopoly throughout the empire and the Aegean Islands. The Fourth Crusade was a complete victory for the Venetians but for nor nobody else; it never reached the Holy Land. Pope Innocent made the best of the situation in the hope that the temporary union of the Greek and Latin churches under the Roman papacy might become permanent. But far from unifying Christians, the establishment of a Latin empire only further divided them. In the last analysis, the Fourth Crusade was a fiasco: it did nothing to weaken the Muslim empire’s power; it was anything but a credit to Christianity.

This Crusade was the most pathetic of all Christian attempts to free the Holy Land. It was also the most senseless. The movement originated in France and Germany, and peasant children in two separate bands flocked to join it. They were convinced they could succeed where older and more sinful crusaders had failed: the miraculous power of faith would triumph where the force of arms had not. Many parish priests and parents encouraged such religious fervour and urged the children on. The pope and higher clergy opposed the outburst but were unable to stop it entirely. Despite all their efforts, a land of several thousand children (reportedly led by a Cologne boy named Nicholas) set out for Italy. About a third survived the march over the Alps and as far as Genoa, another group reached Marseilles. The luckier ones eventually managed to get safely home, but many others paid dearly for their innocence and ignorance. For them, the route to Jerusalem came to a dead end on the auction blocks of Mediterranean slave dealers.

Instigated by Pope Innocent III at the Fourth Lateran Council in 1215, this Crusade was fixed for 1217 under John Brienne, king of Jerusalem, with the intention of conquering Egypt. John was replaced as leader by the papal legate Pelagius in 1218, and in 1219 the city of Damietta was captured by the Crusaders. The sultan of Egypt offered to exchange Jerusalem for Damietta but this was rejected. After an unsuccessful assault on Cairo in 1221, the Crusaders surrendered Damietta in return for the freedom to retreat.

Often called the Diplomatic Crusade, this expedition was led by Emperor Fredrick II, the grandson of Frederick I Barbarossa. After several postponements, Frederick undertook the Crusade in 1228, but he fought no battles. Instead, by negotiation, he obtained Jerusalem and a strip of territory from Acre to Jerusalem for the Christians. He had previously (1225) married Yolanda, the young heiress of the kingdom. Following her death in 1228, Frederick crowned himself king of Jerusalem.

Led by King Louis IX of France and directed against the Arabs of Egypt, this Crusade was a complete failure. After the capture of Damietta, the crusaders were decisively defeated at Cairo and King Louis was captured. Completely victorious, the Arabs demanded and received a huge ransom for the release of the king.

Disregarding his advisers, King Louis IX again attacked the Arabs in North Africa. This time he struck the city of Tunis. The Crusaders picked the hottest season of the year for campaigning and were devastated by a pestilence. One of its victims was Louis IX, whose death in 1270 ended the Crusade.