Do you want to save dozens of hours in time? Get your evenings and weekends back? Be able to teach Battle of Verdun to your students? 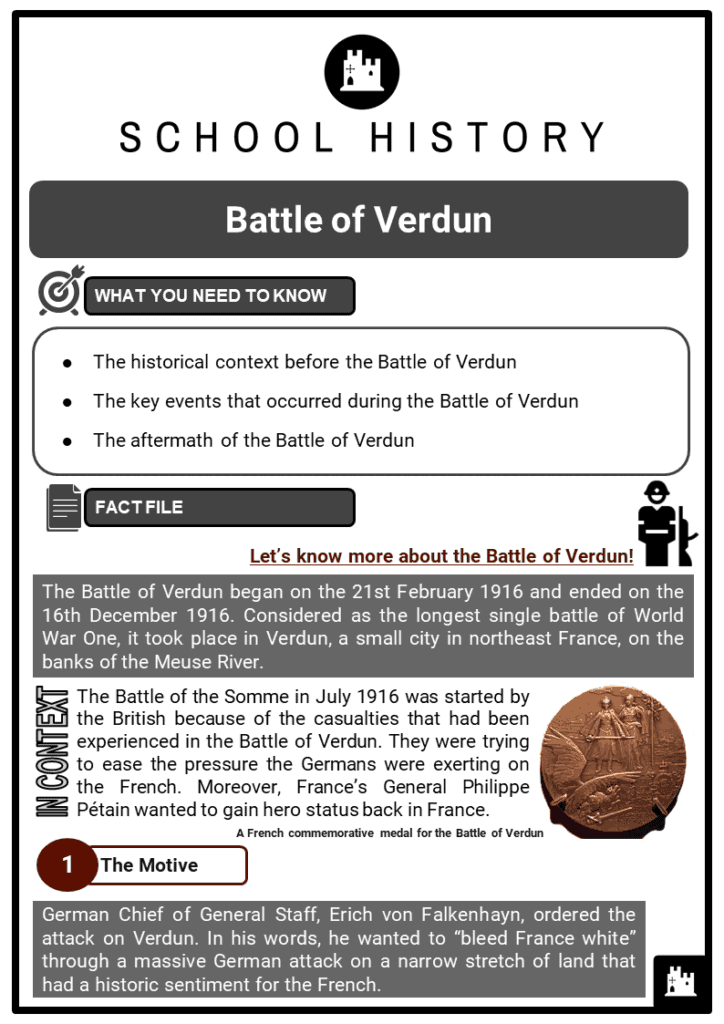 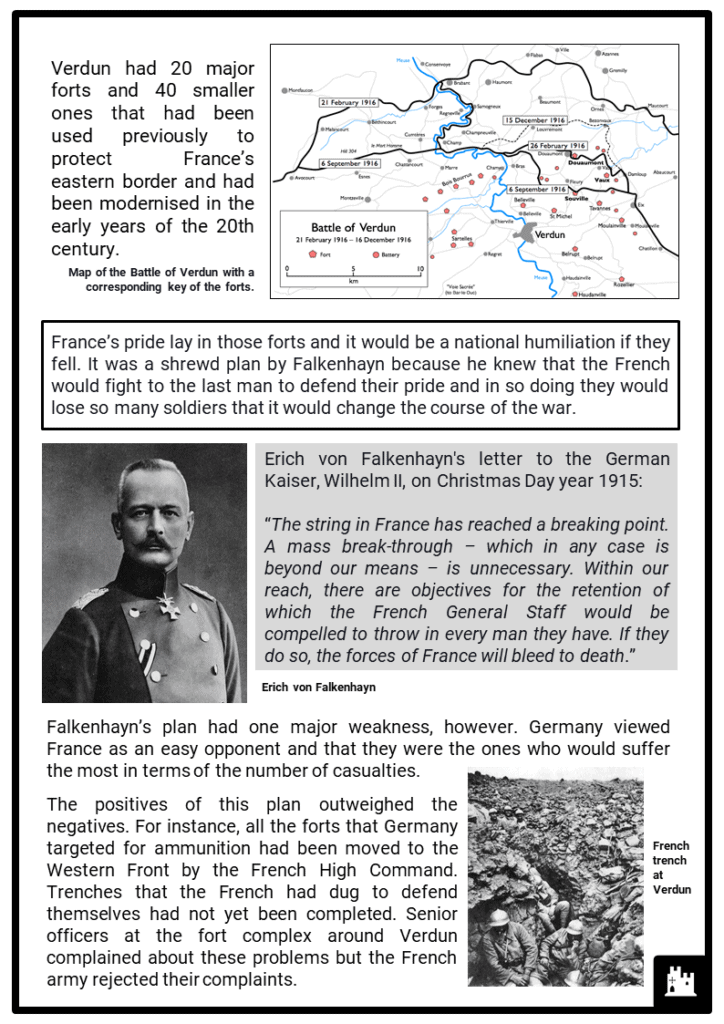 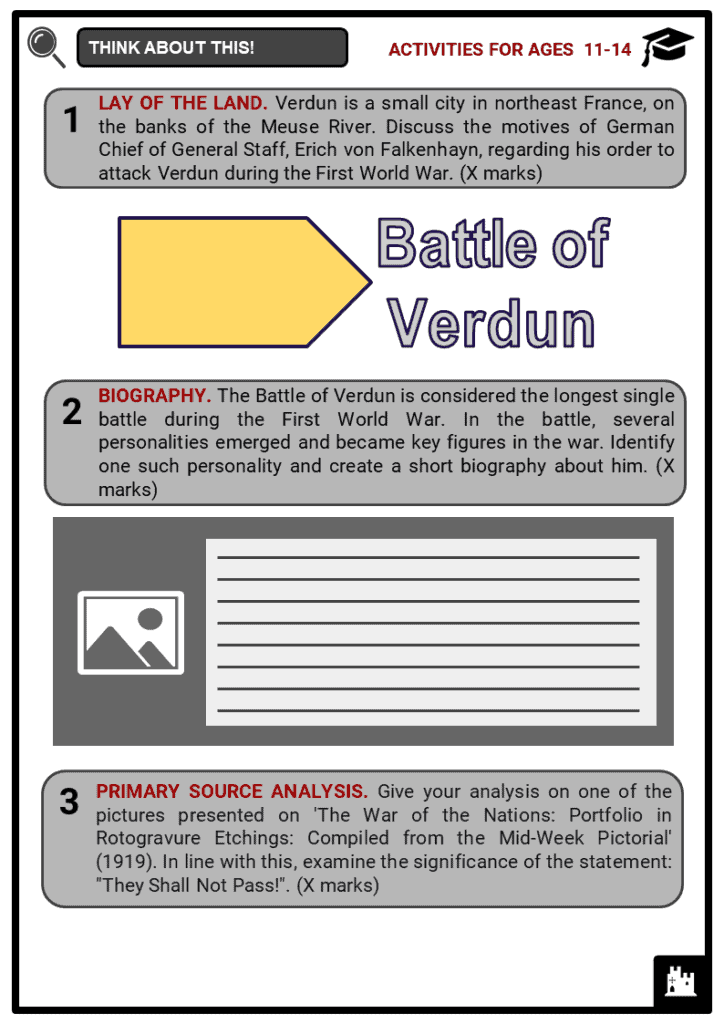 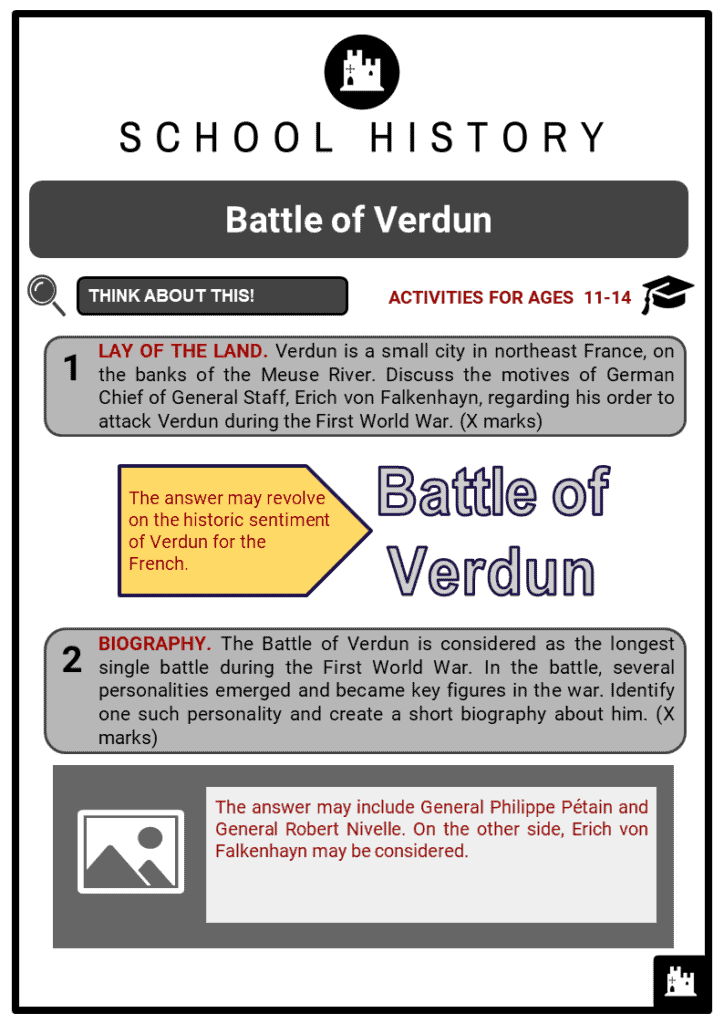 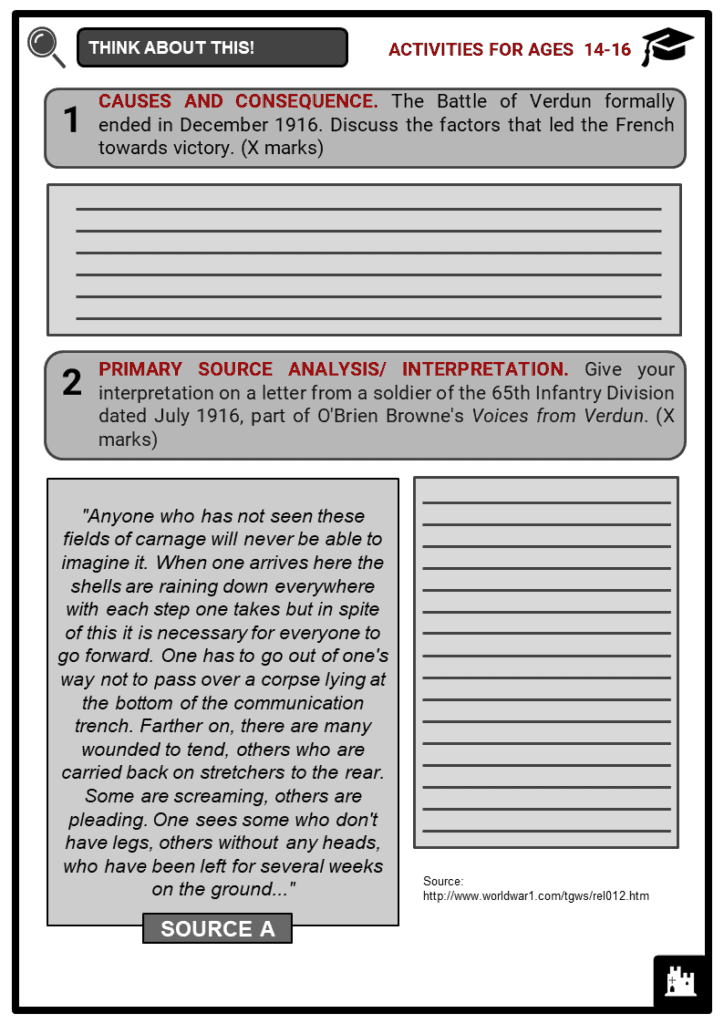 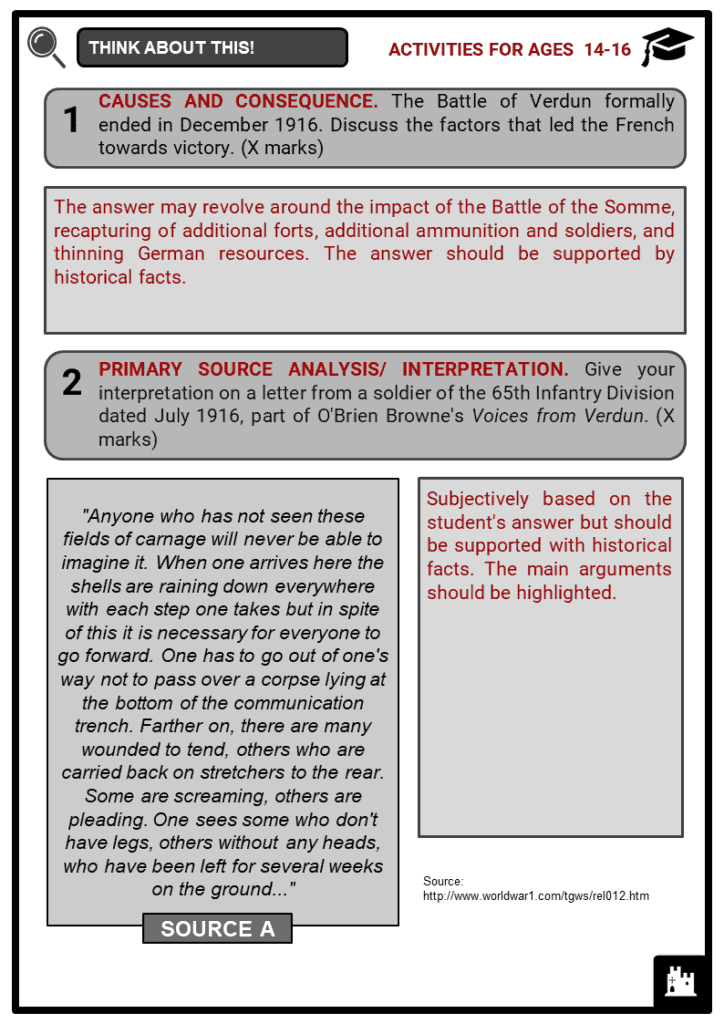 German Chief of General Staff, von Falkenhayn, ordered the attack on Verdun. As he put it, he wanted to “bleed France white” through a massive German attack on a narrow stretch of land that had historic sentiment for the French. Verdun had twenty major forts and forty smaller ones that had been used previously to protect France’s eastern border and had been modernised in the early years of the 20th century.

France’s pride lay in those forts and it would be a national humiliation if the forts fell. It was a shrewd plan by Falkenhayn because he knew that the French would fight to the last man to defend their pride and in so doing they would lose so many soldiers that it would change the course of the war. His exact words were, “The string in France has reached a breaking point. A mass break-through – which in any case is beyond our means – is unnecessary. Within our reach, there are objectives for the retention of which the French General Staff would be compelled to throw in every man they have. If they do so, the forces of France will bleed to death.”

Falkenhayn’s plan had one major weakness, however. Germany viewed France as an easy opponent and that they were the ones who would suffer the most in terms of the number of casualties. The positives of this plan outweighed the negatives, for instance, all the forts that Germany targeted for ammunition had been moved to the Western Front by the French High Command. Trenches that the French had dug to defend themselves had not yet been completed. Senior officers at the fort complex around Verdun complained about these problems but the French army rejected their complaints. 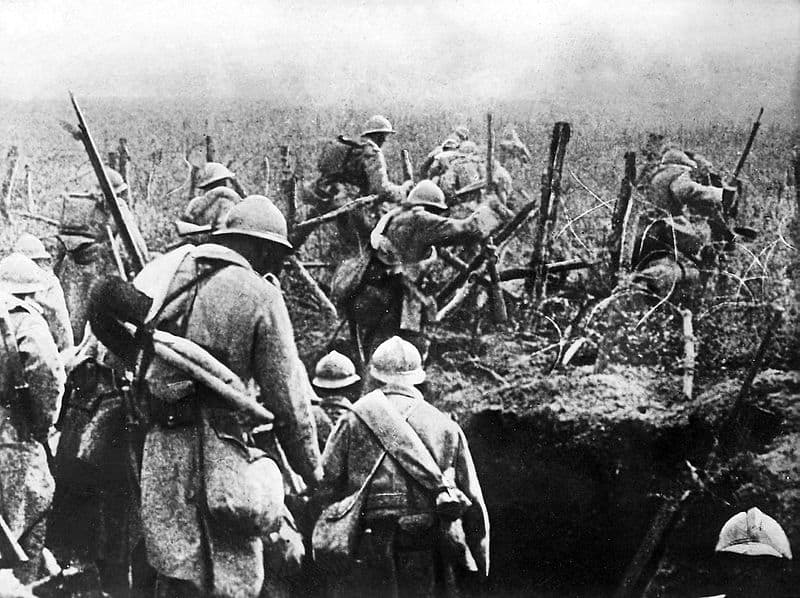 The attack was started by 140,000 German troops.  In the Verdun region, they had 1,200 artillery guns that were equipped with 2,500,000 shells and had 1,300 ammunition trains to supply these guns. The German air force also provided some more firepower as they had 168 planes located in the area. These numbers were the largest in history up to that point. On the other side, the French only had 30,000 troops to fight off the Germans. On February 21st, when the war started, 1,000 German artillery guns fired on a six-mile line along the French front. The impact of these artillery guns was retold by one French soldier who managed to survive. He said, “Men were squashed, cut in two or divided from top to bottom, blown into showers, bellies turned inside out, skulls forced into the chest as if by a blow from a club.”

These attacks continued and the subsequent battle lasted for more than 300 days. Germany advanced the eight miles needed to capture Verdun thanks to a large number of flamethrowers. 10,000 French soldiers were captured by the 25th of February. German soldiers were surprised at the little resistance they got from the huge fort of Douaumont, which was considered to be the most powerful fort in the world. Only 56 elderly part-time gunners were manning it. In an attempt to hide their losses, the French public was not immediately told about the fall of Douaumont by the government. As a matter of fact, some Parisian newspapers did not even carry any stories about its loss, claiming that the battle around Verdun was going well for the French. The fort at Douaumont was only five miles from Verdun.

General Philippe Pétain, in charge of defending Verdun, was in an extremely difficult predicament. There was barely a road leading to Verdun as it was just a narrow path not designed for vehicles and military tanks, so calling for reinforcements would be hard. 6,000 vehicles were supposed to help defend Verdun by ferrying 25,000 tons of ammunition and 90,000 soldiers into Verdun. This was approximately 66 percent of the French army and all these vehicles were supposed to pass up this road at some time to save Verdun. The road was nicknamed “Sacred Way” by the French. Despite all these reinforcements, the French suffered badly and this was summed up by two French soldiers present at the war who described their ordeal. They said, “You eat beside the dead; you drink beside the dead, you relieve yourself beside the dead and you sleep beside the dead. People will read that the front line was Hell. How can people begin to know what that one word – Hell – means?”

In all wars, both sides suffer and the Germans also suffered huge losses. By the end of April, the Germans had lost 120,000 men compared to the French who had lost 133,000 men. General Pétain said, “When they came out of the battle, what a pitiful sight they were. Their expressions seemed frozen by a wisdom of terror; they sagged beneath the weight of horrifying memories.”

In the spring of 1916, Pétain asked the government for more and more men until it got to a point where they said no. He asked for men because he had planned an attack on Somme. General Pétain was eventually replaced by General Nivelle, a person who believed that you always had to be on the offensive in order to win a war. Soon, summer descended upon the soldiers and by then France had gained an edge over their enemies in terms of air supremacy.

In Paris, 150 miles away, life went on as ‘normal’. Some soldiers were fortunate enough to survive Verdun but they returned to an alien world. Food was plentiful, unlike what they had been used to in the war. Theatres were also open and people entertained themselves. A few brave souls talked about the situation just 150 miles away. French soldiers found their pay did not go far in Paris. Mutiny started to occur in the fields as French factory workers were earning about sixty times the pay of French soldiers over the course of a week. This disparity became profound in the summer of 1916.

When it was time for the last push to conquer Verdun, German troops were stretched to their limit as they had given their all and could give no more. They were now only 2.5 miles away from Verdun. On June 24th, the explosions in Somme could be heard at Verdun and things shifted within days. The battle at the Somme was to change things on the Western Front. In October 1916, two forts at Vaux and Douaumont had been recaptured by the French but the surrounding land where the initial stages of the battle had taken place since February, was a wasteland. The battle at Verdun, however, continued to December.

The number of casualties that were experienced in this battle was astronomical. Reference books that recorded this battle offer different statistics on how many people died. An accurate figure will never be gotten. It is approximated that the French lost over 360,000 and the Germans nearly 340,000. The battle of Somme was started to help the French and the British hoped that a swift victory here would force the Germans to remove troops from the Verdun area. They did not know what they were getting into as this battle lasted for months.