Do you want to save dozens of hours in time? Get your evenings and weekends back? Be able to teach China between 1900 and 1947 to your students? 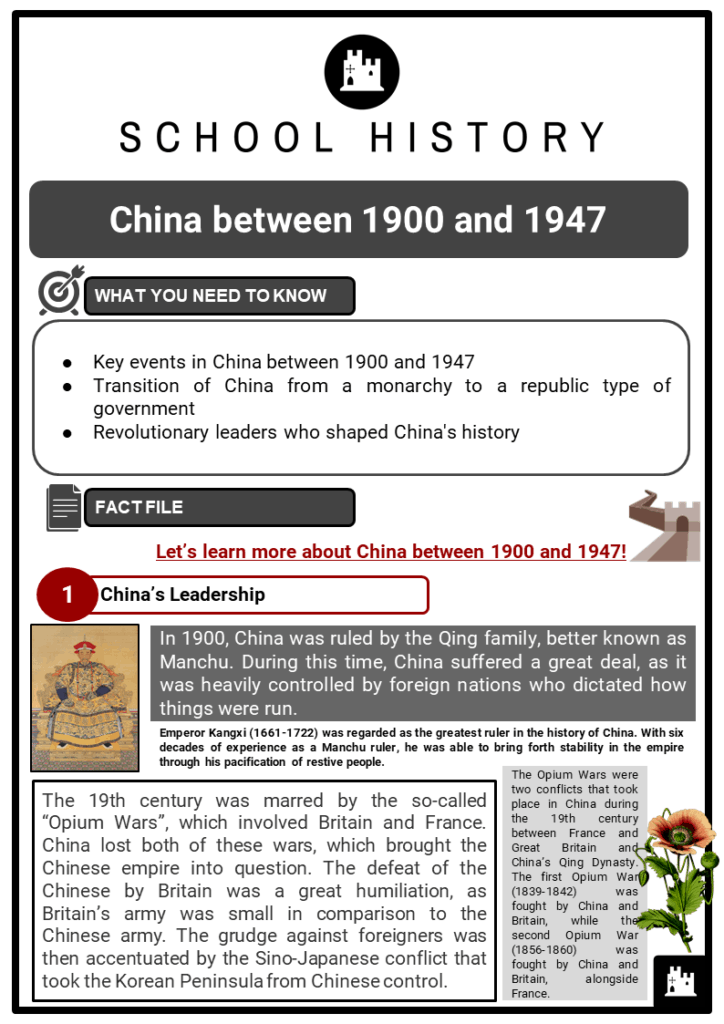 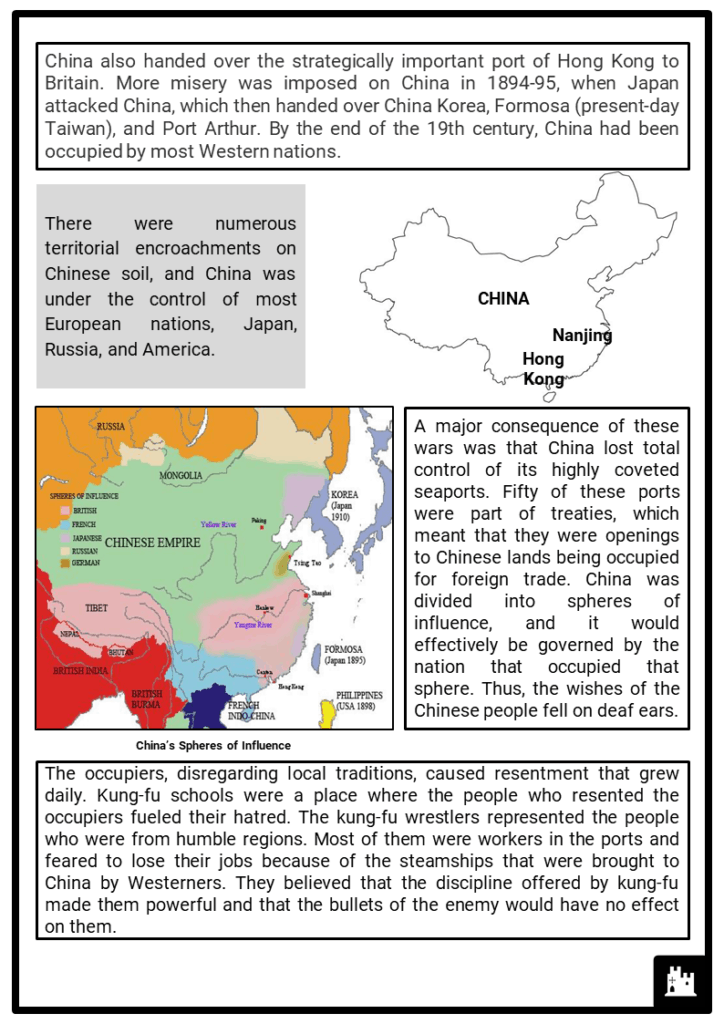 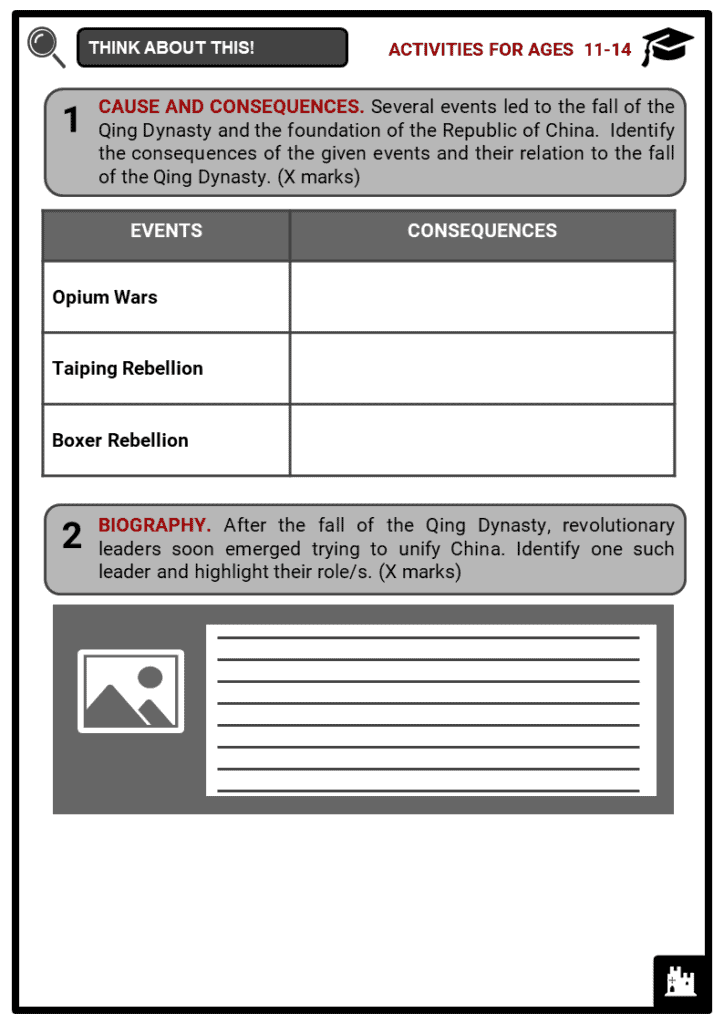 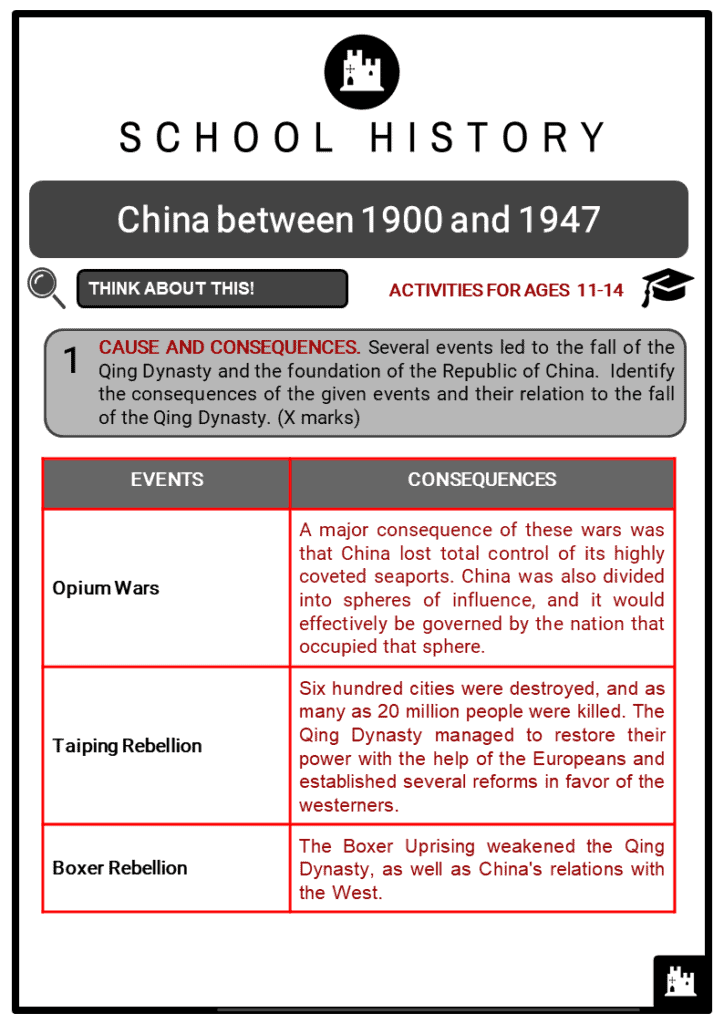 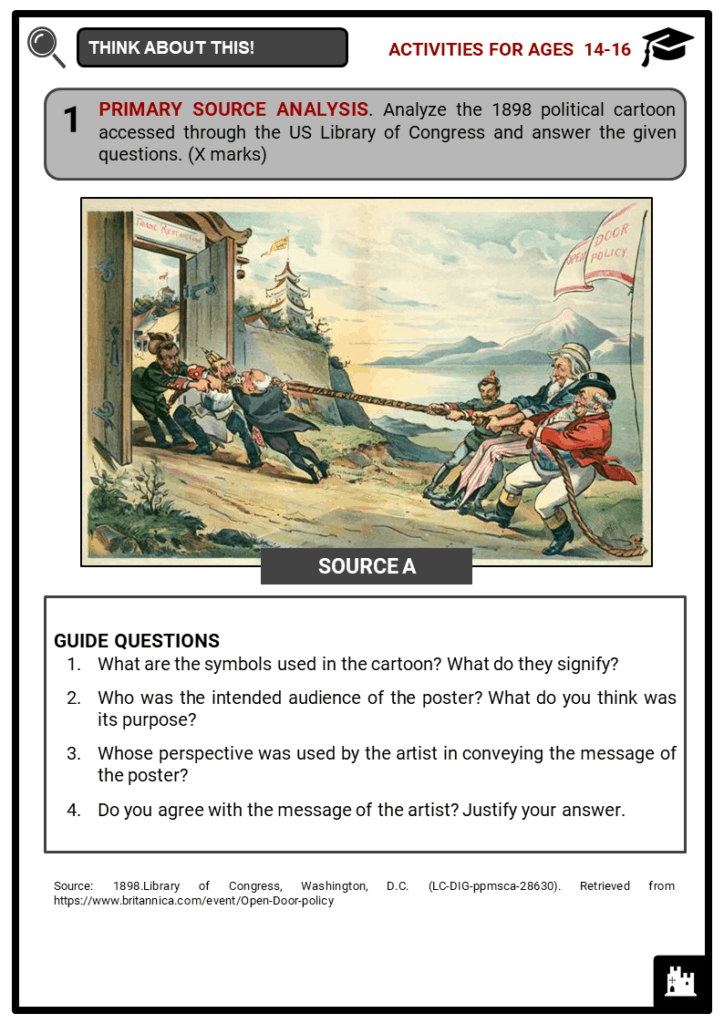 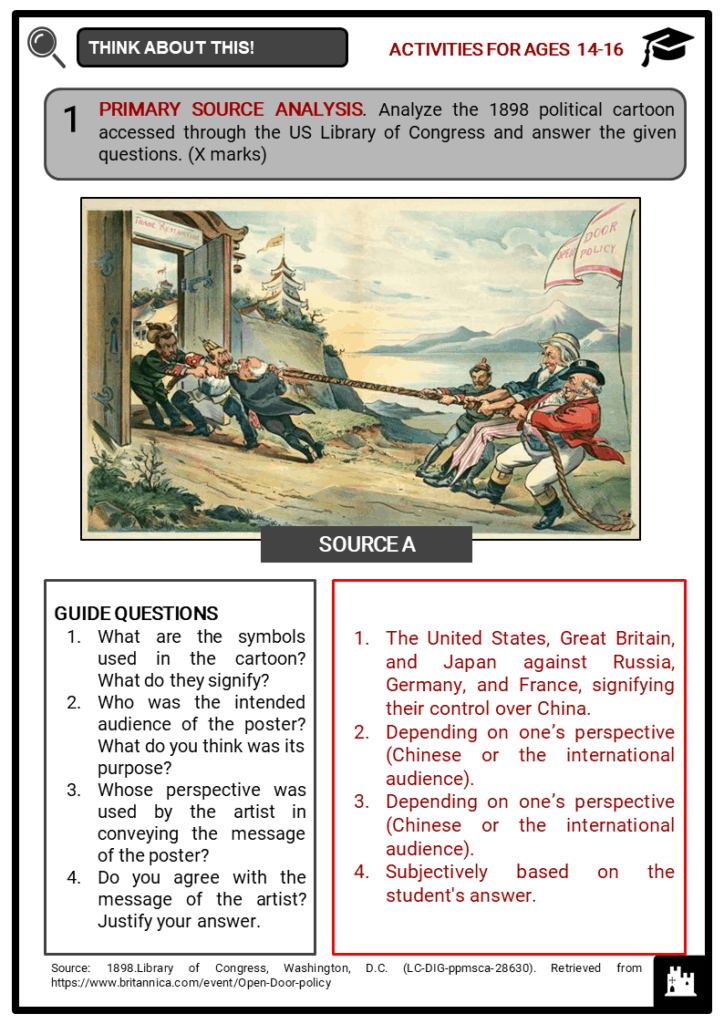 China in 1900 was ruled by the Qing family, better known as Manchu. During this time, China suffered a great deal as they were heavily controlled by foreign nations who dictated how things were run.

The nineteenth century was marred by the so-called “Opium Wars”, which involved Britain and France. China lost both of these wars, which brought the Chinese empire into question. The defeat of the Chinese by Britain was a great humiliation, as Britain’s army was small in comparison to the Chinese army. The grudge against foreigners was then accentuated by the Sino-Japanese conflict that took the Korean Peninsula from Chinese control. China also handed over the strategically important port of Hong Kong to Britain. More misery was imposed on China in 1894-95 when Japan attacked China, who then handed over China Korea, Formosa (present-day Taiwan) and Port Arthur. By the end of the nineteenth century, China had been occupied by most Western nations. There were numerous territorial encroachments on Chinese soil, and China was under the control of most European nations, Japan, Russia and America.

A major consequence of these wars was that China lost total control of her highly coveted seaports. Fifty of these ports were part of treaties, which meant that they were openings to Chinese lands being occupied and for foreign trade. China was divided into spheres of influence, and they would effectively be governed by the nation that occupied that sphere. The wishes of the Chinese people fell on deaf ears.

The occupiers, disregarding local traditions, caused resentment that grew daily. Kung-Fu schools were a place where the people who resented the occupiers fueled their hatred. The kung-fu wrestlers represented the people who were from humble regions. Most of them were workers in the ports and feared losing their jobs because of the steamships that were brought to China by Westerners. They believed that the discipline offered by kung-fu made them powerful and that the bullets of the enemy would have no effect on them.

The imperial family took the blame for the current situation in China. Their standing was not changed by the West’s invasion of China. There were uprisings against the Manchus, too, the most profound one being the Taiping Rebellion that lasted from 1850 to 1864. Six hundred cities were destroyed, and as many as 20 million people were killed. Tracts of fertile land that China could not afford to lose were destroyed. The Manchus managed to restore their power with the help of the Europeans, but the hatred among the Chinese grew even more when the Manchus were back in power.

In an attempt to curb the discontent in China, the Manchu family introduced a batch of reforms in 1898 known as the Hundred Days of Reform. These reforms were intended to help the country adapt to Western civilisation. In this programme, new schools and colleges would be set up to improve the educational system in China. They would also help address the technological gap that had caused the two defeats to France and Britain. Corrupt officials present in the courts would be removed, and the financial structure of the government would be modernised and reformed. The reforms had to change virtually everything due to the general backwardness of the previous systems. This same modernisation had happened in Japan.

However, these reforms to modernise China were never introduced. A rebellion led by Cixi, a former empress, prevented these reforms being introduced. Therefore, China still had its status of being a nation under the control of European nations and of being led by a very conservative court, which sabotaged the reforms they believed would weaken the Manchu dynasty’s power. Soon, a movement was formed to fight against those who ruled China and was known as the Yi-Ho Tuan movement, meaning “The Boxers”.

The elite amongst the Chinese people blamed the Europeans for the losses they had experienced in the Opium Wars, and many Chinese people began to share this opinion. It was perceived that the Europeans were running China through their domestic and foreign policies and that the situation was getting out of hand. A strong sense of nationalism swept over China toward the end of the nineteenth century, and many wanted to reclaim the lost glory of the Chinese. In 1898, these sentiments led to a rebellion.

The rebellion started in Northern China in the Shantung Province. This province was a German sphere of influence, and they dominated the railway lines, factories and coal mines. The Germans made profits at the expense of the Chinese, who were paid very poor wages and lived in poverty.

Those who instigated the Shantung rebellion belonged to a secret society called Yi Ho Tuan, meaning “Righteous Harmony Fists”. The rebellion started to spread across China, even reaching the capital Peking by 1900.

The Manchu government was one of the targets of the rebellion. The Manchu government was under an Empress Dowager. She had once been married to a former emperor and was very shrewd. China was a society where gender equality did not exist. She was a stand-alone case in a male-dominated society and realising what was going on made contact with the Boxers to offer them support. They accepted and turned their full attention to the Europeans.

Many Europeans lived in the capital Peking, and their lifestyle differed from those of the Chinese who lived in the city. The Chinese there were treated like slaves, therefore, the Boxers found ready support there.

By June, it became clear to the Europeans that their lives were in danger and they were ready to leave the city. After attempting to complain, the German ambassador was seized and executed, sending out a very clear message. The rest of the Europeans crowded into the British Legation for safety where they were defended by an assortment of 400 European soldiers, however, They lacked proper weapons but fought off the Boxers with great bravery.

This Siege of the Legation lasted for 55 days when an international force marching from Tientsin on the coast managed to help the stranded Europeans. Scores were injured, and some died.

In retaliation, the international cohort went on the rampage in Peking resulting in severe damage to the town. The Chinese government was ordered to pay $450 million in compensation for the damage they had done.

Revolutionary leaders soon emerged from the rubble that was China. Some are discussed below.

Yat was a nationalist revolutionary who believed China could only move forward in the early 1900s if the country became a republic and followed the western ways in industry and agriculture. Unless they did this, he was convinced they would remain backward by Western standards. He believed in three principles: nationalism, democracy and socialism. These beliefs were the backbone of the League of Common Alliance that Sun Yat founded in 1898, which later became Guomindang.

When the Chinese Revolution happened in 1911, Sun was in America, and the Manchu dynasty was overthrown. He quickly returned to China and was elected President of the United Provinces of China in January 1913 by an assembly in Nanking. He resigned in an attempt to make rival factions come together for the sake of the nation but this failed as China was now being run by warlords.

In 1922, Sun Yat accepted the beliefs of the Guomindang so that they would be accepted by the Chinese Communist Party founded in 1921. As a result, he got assistance from Russia and helped set up an effective structure for the Guomindang in Canton. He created a system of local Guomindang cells all over southern China so that the party would be more disciplined.

A natural successor to Yat and politically central, he was a leader of the Guomindang, and this helped him to be considered as Yat’s successor. In 1926 he consolidated his place when he went in search of the warlords of China.

In September 1928, a law was passed that gave Chiang dictatorial powers over China. Chiang was appointed president but did not have a hold over the whole nation because of its vast size and the fact that his army could not be in all parts of the nation at all times. In 1931 there was a Japanese invasion of Manchuria and the eventual attack on China in 1937.

Mao Zedong was born in 1893 and died in 1976. He is considered to be the father of Communist China and alongside Sun Yat and Chiang Ka, played a fundamental part in China.

This was a march that occurred in the autumn of 1933 and ended up saving Mao Zedong and the communist party Guomindang. The Long March came about when the Chinese Communists had to flee an attack ordered by Chiang Kai. The Red Army was an entity that Mao created, and it turned out to be his lifeline during the Long March. Without it, the Chinese Communist Party would have collapsed in the late 1920s and 1930s.

This war started in July 1937 when Japan claimed that they were attacked by Chinese troops at the Marco Polo Bridge near Beijing. They launched a full-scale invasion of China and used the already-conquered Manchuria as a launching base for their army. The Chinese organised resistance but they were up against a formidable enemy and China’s most important port, Shanghai and Chiang Kai capital, Nanking, fell in December 1937.