Do you want to save dozens of hours in time? Get your evenings and weekends back? Be able to teach History of Slavery to your students? 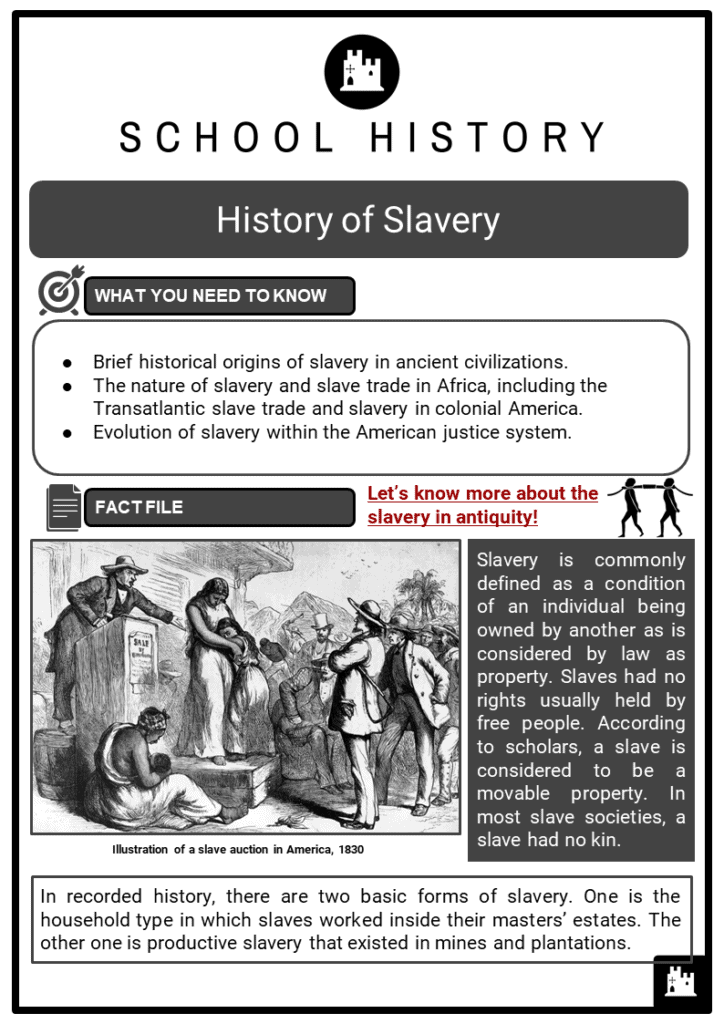 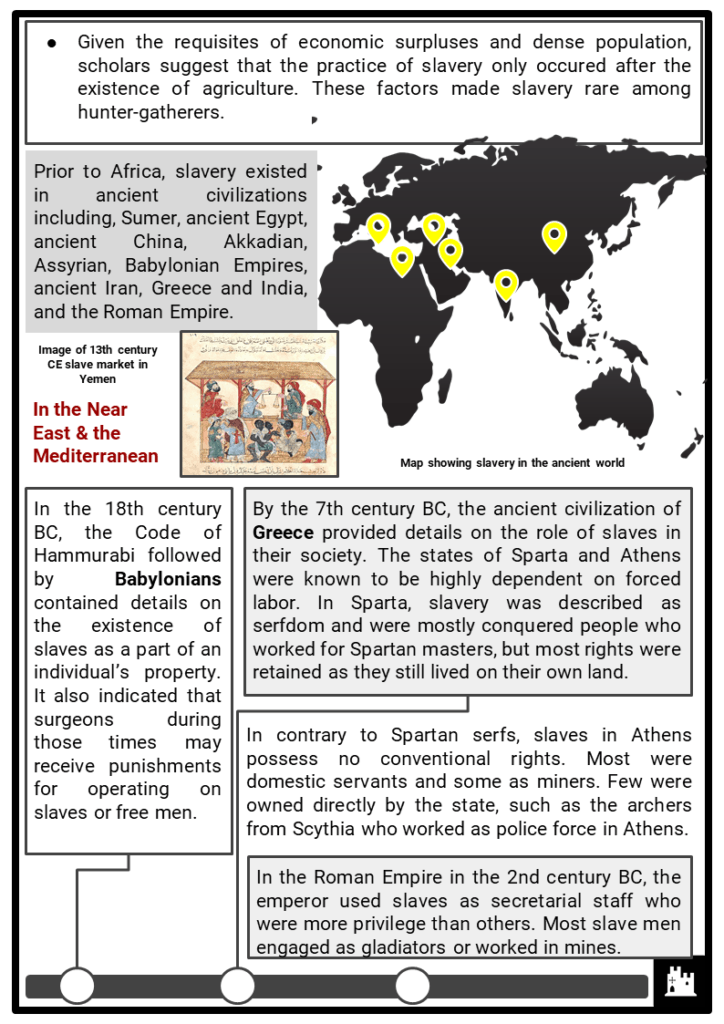 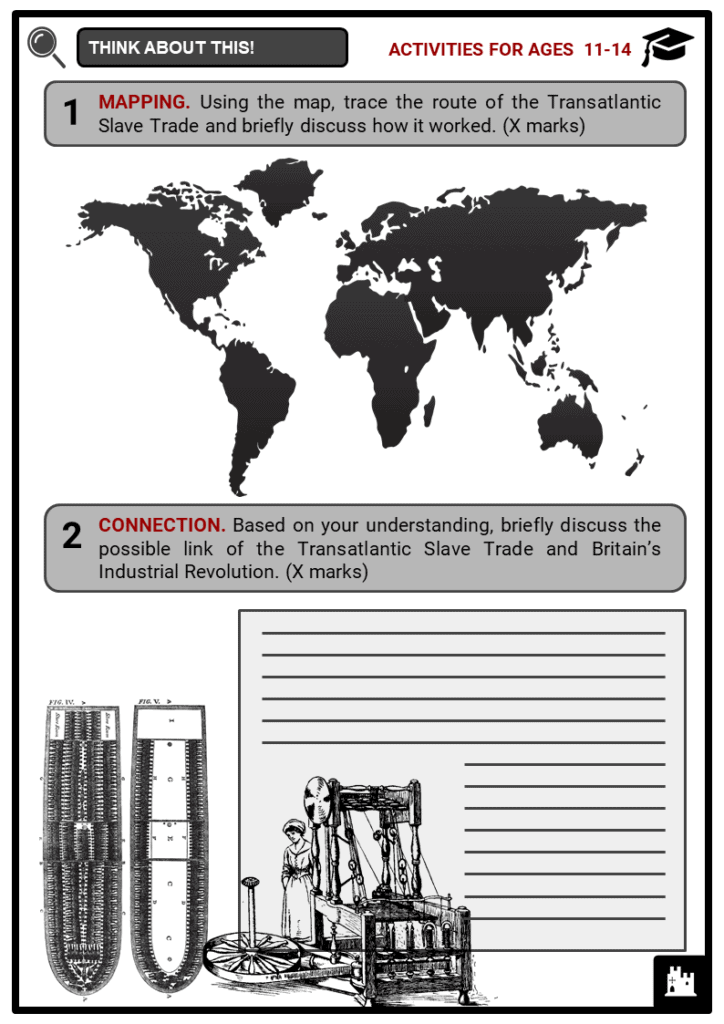 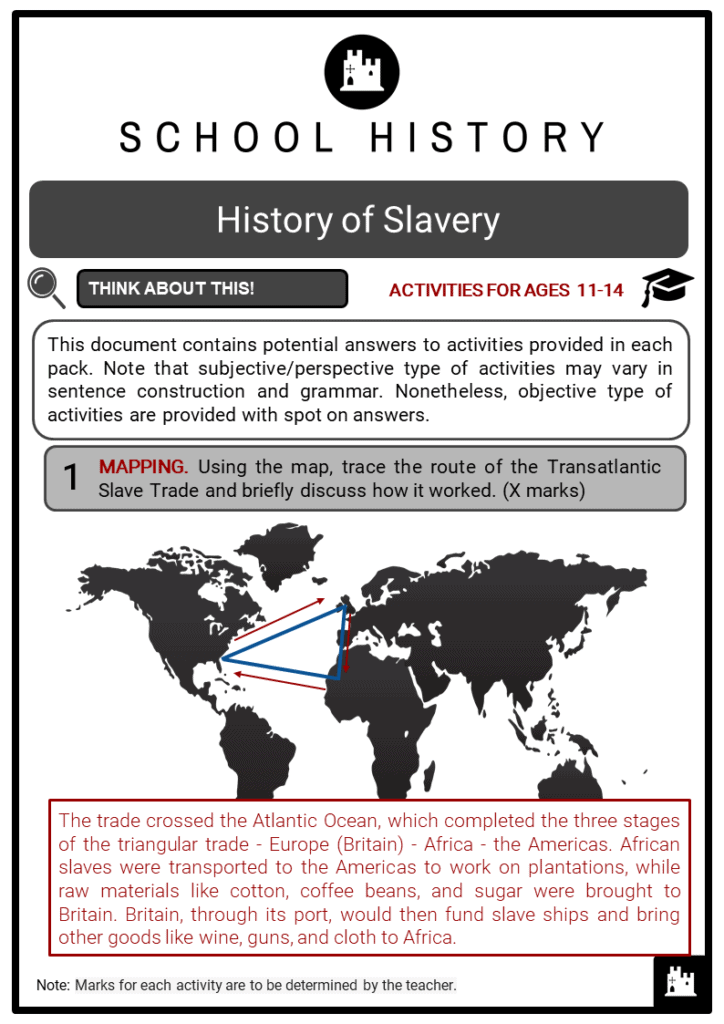 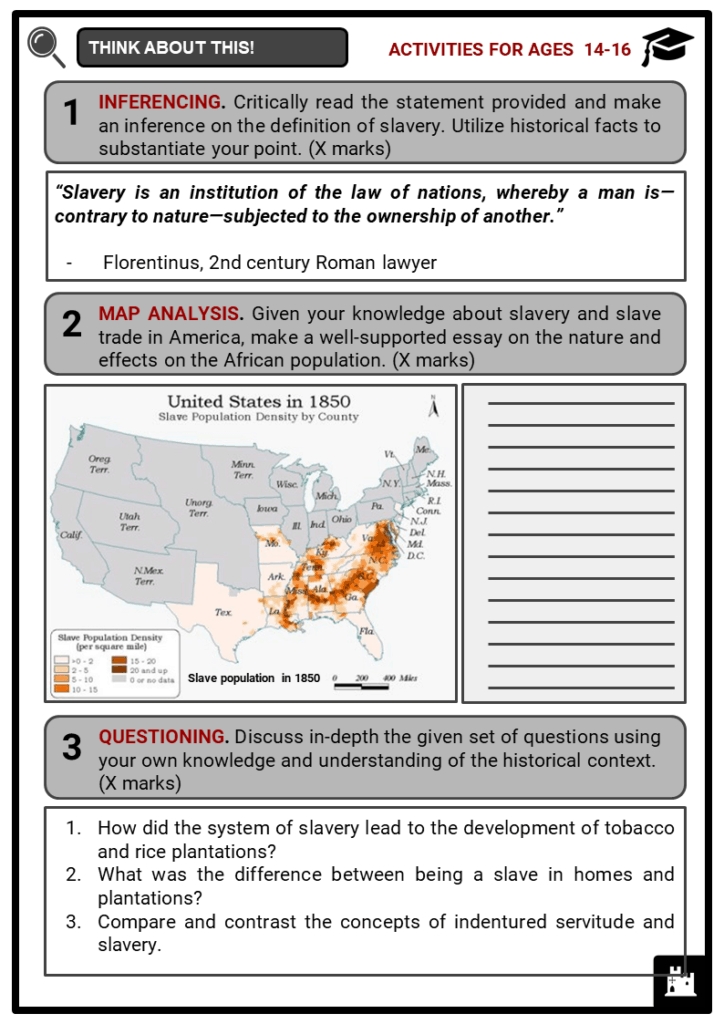 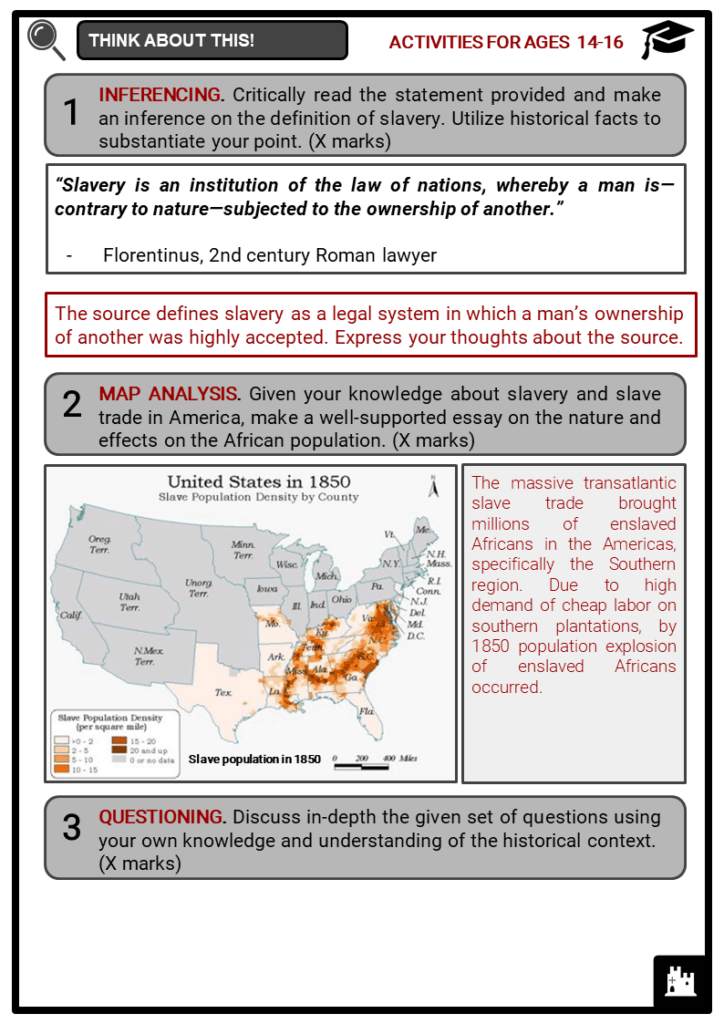 The French and the Spaniards were accustomed to bringing slaves with them as part of their expedition crew. For instance, slaves in 1513 were in the company of Ponce de Leon in his expedition to Florida. African slaves were a cheaper source of labour than the poor Europeans indentured servants.

John Hawkins was the first Briton to engage in the slave trade in 1562, making a considerable profit transporting slaves from Africa to work in Caribbean Island. In 1581, Spanish residents in Florida, St. Augustine, the first permanent settlement in Florida were the first to hold slaves within the present-day US.

In 1619, when around 20slaves arrived in Virginia’s Jamestown colony, they were classified as indentured servants and freed, like their white counterparts after a certain period.

By the time the trans-Atlantic trade was coming to an end in 1808, only 6 per cent of African slaves landing in the New World had gone to North America.

From 1500-1900, approximately 12 million enslaved African were forced from their homes and journeyed westwards to European countries as slaves, with 2 million dying in transit and being thrown overboard.

Slavery and the Southern Population Explosion

The patterns for slavery took different forms in the North and Southern parts of America.  In the North, slaves were never more than 5% of the total Northern population and were fewer than 10% of the half a million slaves in the thirteen colonies by the time of the American Revolution.

New York, with 20,000 slaves, had the most significant number, followed by New Jersey with approximately 12,000 slaves. Vermont was the first of the Northern states to abolish slavery in 1777 before joining the Union in 1791. The Northern states implemented a process of gradual emancipation throughout the eighteenth and early nineteenth centuries, with the requirement of children of slave mothers to remain in servitude for 28 years. The other regions above the Mason-Dixon line ended slavery upon statehood in the early nineteenth century with Ohio in 1803 and Indiana 1816.

Slaves were primarily engaged in Agriculture, which was the backbone of the Southern economy working on indigo tobacco and rice plantations on the southern coast in Maryland, Virginia, and Georgia.

Even before the end of the Trans-Atlantic Slave trade, the South did not need a constant infusion of forced immigrants to work as slaves in their vast populations. This was in part due to the equal male to female ratio of slaves brought into the US in the 1730s to ‘50s that resulted in an increased birth rate among the slaves. Further, the mortality rates among the slaves after the gruesome expedition from the home country reduced dramatically. This was because the Southern region cultivated tobacco, and after the invention of the Cotton Gin in 1793, cotton crops grew half to three-quarters of the corn crop harvested between 1840 and 1860. These tasks were less arduous than the work of the slaves in the sugar plantations of the West Indies and the mines in South America. The Southern slaves worked in industries, undertook domestic tasks and grew food crops in addition to the cash crops.

Evolution of Slavery within the American Justice System

As the young American nation was establishing itself, political and legal thought shifted, and institutions evolved in a manner that facilitated the slave system until its eventual abolition in 1865 by the Thirteen Amendment.

The English common law of property, animals, employment contracting between servants, employees and free persons formed the basis for the US slave law. In 1838, a Kentucky judge ruled in Turner vs Johnson that slaves were to be considered both as property and as a human being with “passions, sympathies and affections like ourselves.”

The French and Spanish influence in Louisiana and to a certain degree in Texas meant that the Roman law, also called the civil law, impacted the slave laws in the two states. On the whole, however, the Northen and Southern laws governed different aspects of slavery, according to rules laid down over time. The southern state's laws applied to matters concerning slave status, masters treatment of slaves, and their interactions with the community as well as slave crimes. Federal laws and the laws of the Northern state applied to matters of interstate commerce, travel and fugitive slaves.

The gradual emancipation principle also meant that there began to emerge two types of people from the enslaved Africans: the blacks who were free and the slaves. The status of each individual flowed from the status of the maternal parent. In general, white people were not slaves, and in situations where white women and slave bore a child, all were bound to servitude for thirty-one years. For a brief period, conversion to Christianity meant that slaves were to be set free, but the practice was quickly abandoned.

Virginia in 1924 passed a series of laws, among them the Racial Integrity Act that classified people by colour. It considered those with black ancestry or one-quarter black as black and they were stripped of civil rights such as the right to vote and access social amenities like public schools and other open spaces. In states like Louisiana, blacks were required to prove their freedom to enjoy a slightly higher status than slaves.

Southern slave masters had a great deal of freedom concerning their dealings with slaves. North Carolina Chief Justice Thomas Ruffin in 1829 in the case of State vs Mann ruled “the power of the master must be absolute, to render the submission of the slave perfect.” This ruling underpinned the attitude the masters had towards their slaves. Slave masters were restricted in applying physical coercion onto their slaves but could withhold wages in situations where the slaves failed to complete tasks and responsibilities.

There were tensions among the southerners’ slave owners who were harsh and those who were kind to their slaves. The former group feared that unchecked slave abuse would lead to theft and a public uprising among the slaves. The latter were treated with consternation because of going against the tide of the time. However, the Delaware Act of 1767 well captured the “moral” dilemma of the time. It provided that “it is found by experience, that freed negroes and mulattoes are idle and slothful, and often prove burdensome to the neighbourhood wherein they live and are of evil examples to slaves.”

The Act provided a basis for prosecuting masters who were either too lenient with their slaves or too abusive. However, there was a challenge in pursuing masters since most of the time, the crimes required the testimony of slaves who were not allowed by law to give testimony against male heads of households.

Manumission, the legal act of willfully releasing a slave, began to take root after the Revolutionary war with many believing it was consistent with the ideals of the new nation. However, it was feared that manumission would create a group of former slaves who may cause a rebellion among present slaves against their masters.

In the 1830s, most southern states began to limit Manumission due to the public cost of putting up young, old, and disabled former slaves. The restrictions included the age at which slaves could be free and the number freed by a single master.

Furthermore, to save the state treasury from the cost of taking care of poor former slaves, some slaves were required to file indemnifying bonds with the state treasurers and other measures to contribute to the upkeep of former slaves. Other states encourage masters to emancipate their slaves out of state or handover their slaves to the Colonisation Society that would send freed slaves to Liberia.

By 1860 most of the southern states had banned instate and postmortem manumissions and passed laws that enabled blacks to voluntarily become slaves. Masters were also required to maintain a specific ratio of white to black residents on plantations. Some laws banned slaves from owning musical instruments or firearms. Slaves lacked the legal capacity to contract or testify against whites in court. Half of the southern states prohibited masters from teaching slaves how to read or write.

Slaves were allowed marginal indulgences that were thought to contribute to their labour productivity, such as owning small properties.