Do you want to save dozens of hours in time? Get your evenings and weekends back? Be able to teach Israel War 1948 to your students? 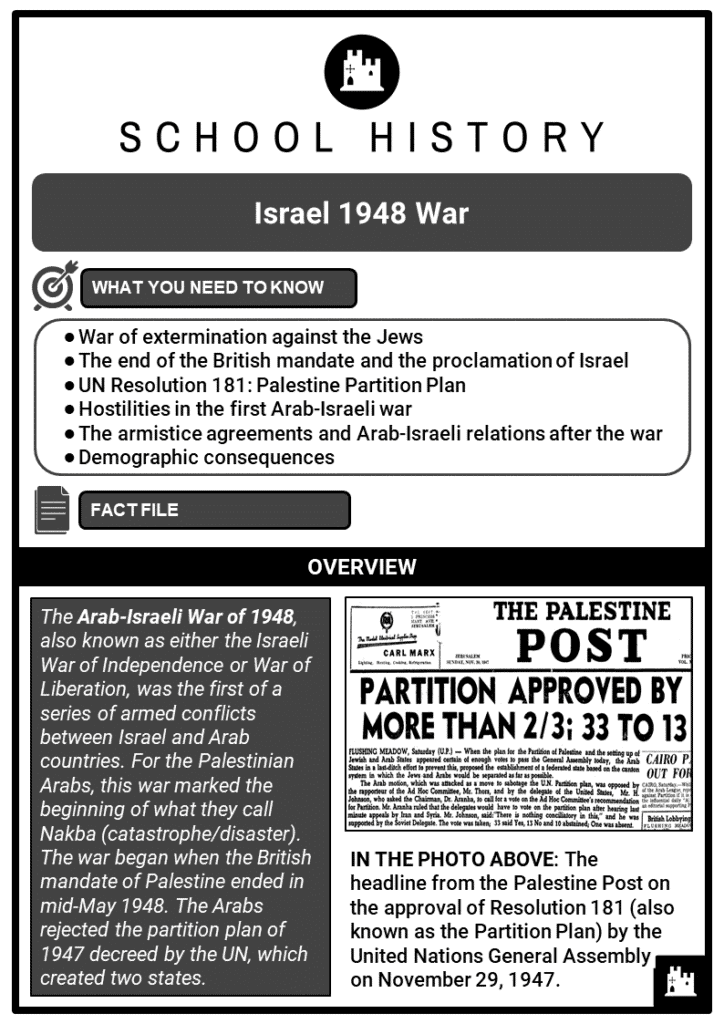 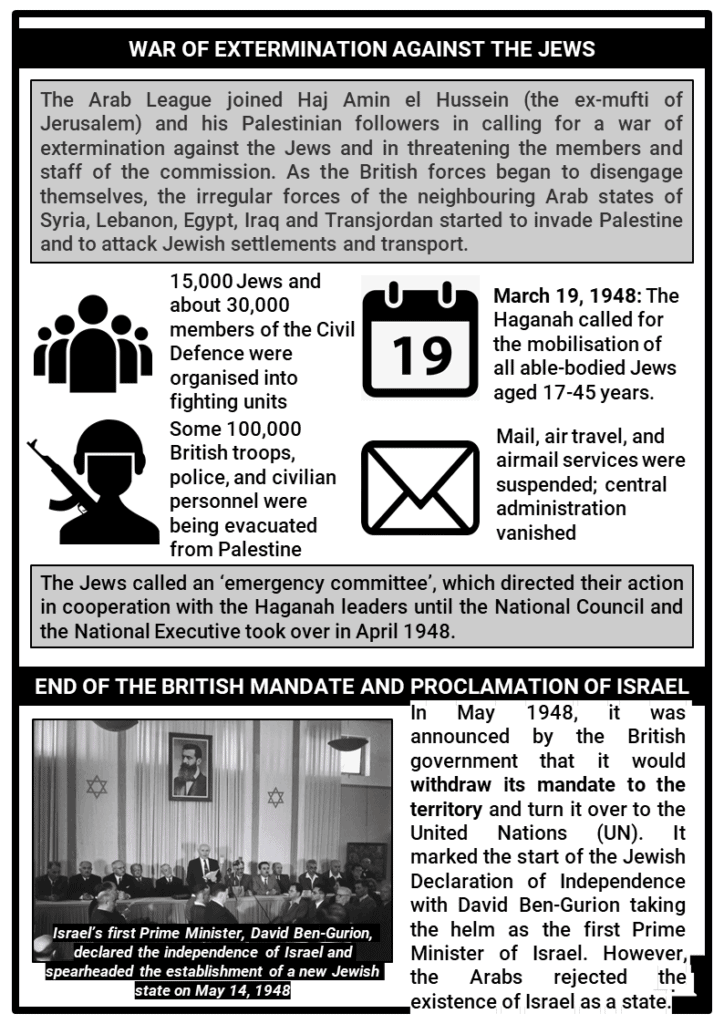 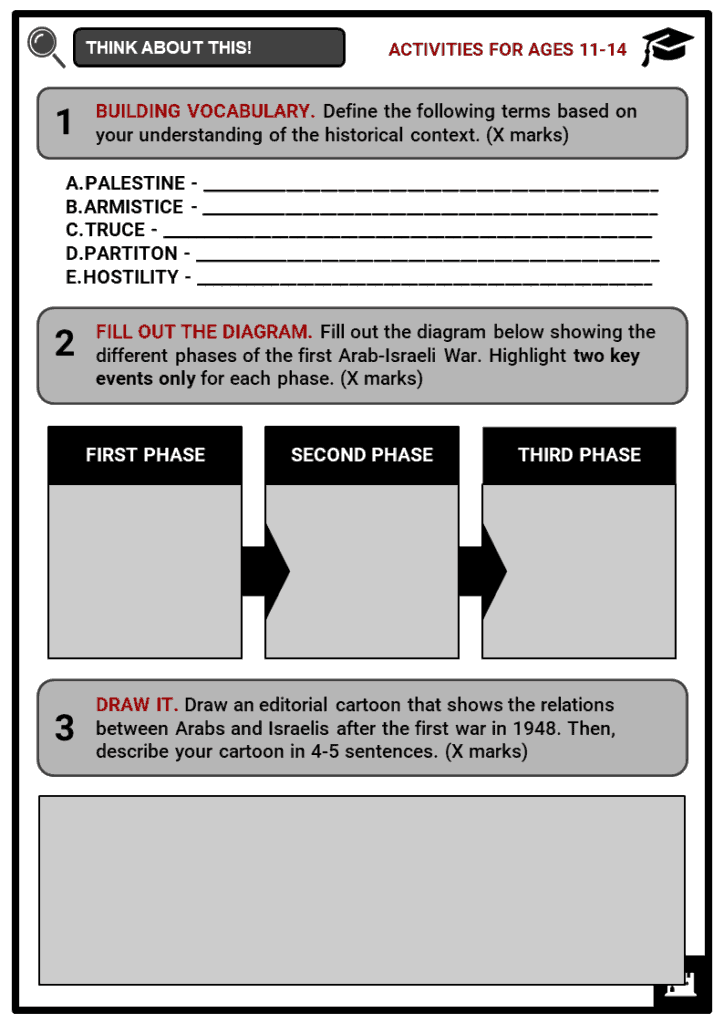 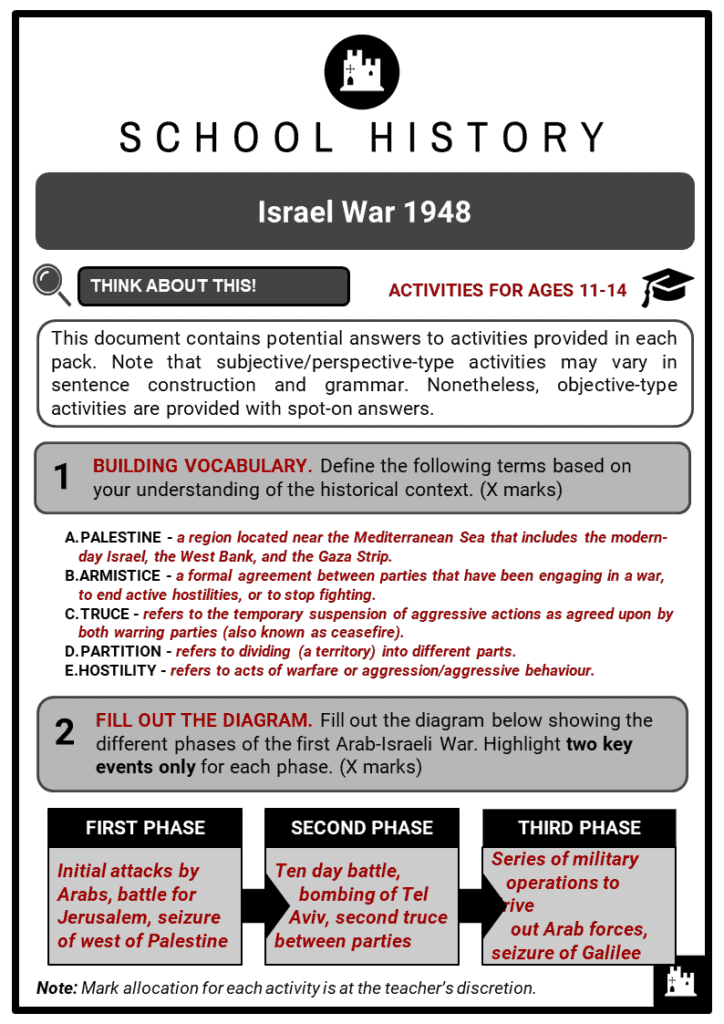 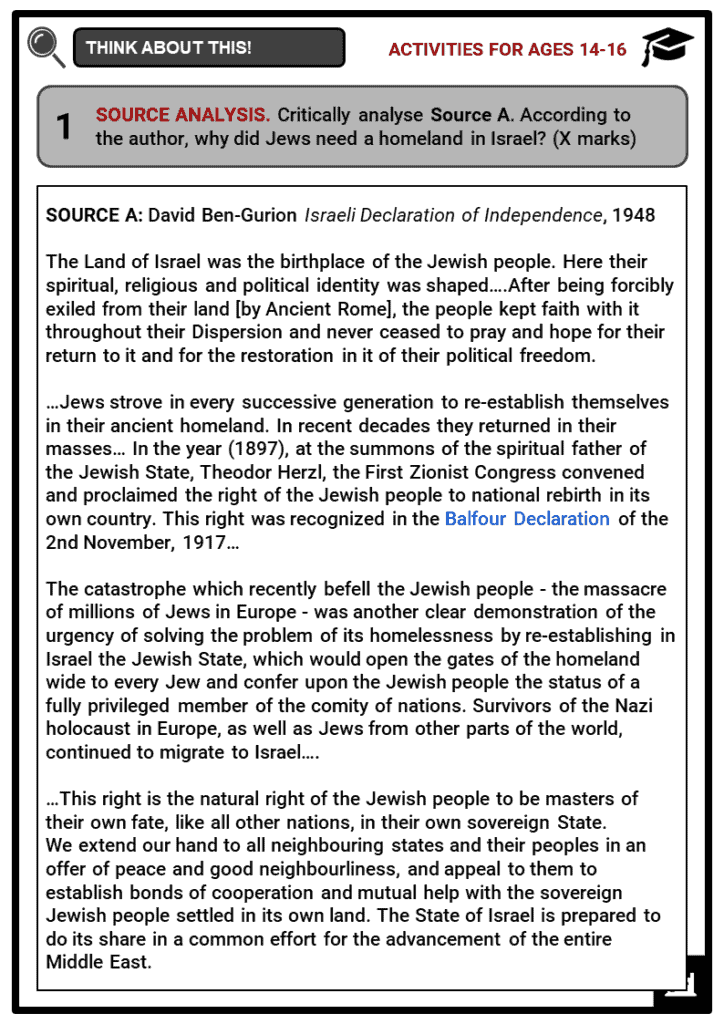 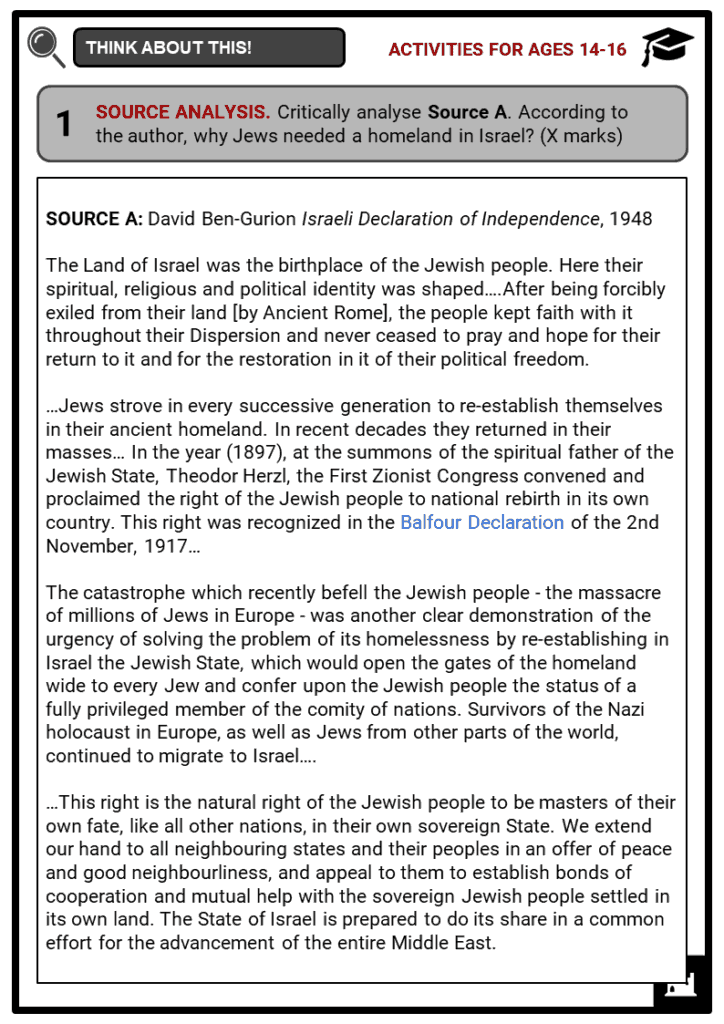 The Arab League joined Haj Amin el Hussein, the ex-mufti of Jerusalem, and his followers in Palestine in calling for a war of extermination against the Jews and in threatening the members and staff of the commission. As the British forces began to disengage themselves, the irregular forces of the neighbouring Arab states of Syria, Lebanon, Egypt, Iraq, and Transjordan started to invade Palestine and to attack Jewish settlements and transport. This attack was met by some 15,000 Jews organised in various fighting units and about 30,000 members of the Civil Defence. On March 9, 1948, the Haganah - the underground Jewish defence force - called for the mobilisation of all able-bodied Jews between the ages of 17 and 45. In the meantime, some 100,000 British troops, police, and civilian personnel were being evacuated from Palestine; the flow of oil from Iraq and Haifa was stopped; mail, air travel, and airmail services were suspended by the British; and central administration rapidly vanished. To avoid chaos, the Jews called an ‘emergency committee’, created in November 1947 by the National Council of Palestine Jews and the Jewish Agency. This body directed Jewish action in cooperation with the Haganah leaders until the National Council and the National Executive took over in April 1948.

The Palestinian Proclamation of the State of Israel

On May 13, 1948, the blockade of Palestine was officially lifted, and a day later, 28 years of mandatory rule in Palestine ended. On the same day, May 14, the Jewish National Council proclaimed the establishment of the state of Israel and the provisional government. On the next day, May 15, the Arab armies invaded Palestine to annihilate Israel.

Recognition by the United States and the Soviet Union

At Lake Success, a special commission of the UN General Assembly had convened on April 16, 1948, to consider the future government of Palestine. After four weeks of heated debate, the Assembly was preparing to vote.

On May 14, Israel had been granted de facto recognition by the United States. On May 17, also the Soviet Union acknowledged the existence of the State of Israel.

As its first legislative act, the new government abolished the mandatory power’s restrictions on immigration and land sales, and the doors were open to all Jews who wished to come to Israel. Without delay, essential services were restored, and by June the administration was functioning smoothly. In August a new currency was established; in September, a supreme court was inaugurated in Jerusalem; and on November 8, 1948, the first traditional census was held. Some 10,000 detainees in Cyprus were released and transferred to Israel in January and February 1949. Israel’s voters went to the polls on January 29, 1949, to elect their first Knesset. British official recognition of Israel followed on January 29, 1949. Within one year, Israel gained the attention of 55 states. On February 16, 1949, the Knesset elected Dr. Chaim Weizmann as Israel’s first president and adopted a small temporary constitution to guide its proceedings.

The End of Hostilities in the Arab-Israeli War

The main task of the first Israeli government was to bring to a victorious end the Arab-Israeli War. At the beginning of June 1948, the Israel Defence Force was created, and both the Haganah and separatist units joined the army. On June 11, 1948, the Security Council of the United Nations brought about a break in the hostilities, and Count Folke Bernadotte was appointed on May 20 as the UN mediator. Fighting broke out again on July 9, but this time it lasted only ten days until representatives of the United Nations intervened. Hostilities were renewed several times but ended on January 7, 1949.

By the end of the war, Israel possessed an area that was substantially greater than the one initially allocated by the United Nations. In fact, Israel added to its territories: the city of Jaffa, the new city of Jerusalem, and the ‘corridor' from Jerusalem to the coastal plain.

Dr. Ralph Bunche of the United Nations mediated the armistice agreements, which were signed successfully with Egypt (February 24, 1949), Lebanon (March 23, 1949), Jordan (April 3, 1949), and Syria (July 20, 1949). A conciliation commission was set up by a UN resolution on December 12, 1948, in order to restore full peace between Israel and the Arab States. However, its efforts proved to be futile. Besides, the UN Relief and Works Agency for Palestine Refugees was created to alleviate the hardships of the war victims.

In May 1949 the General Assembly admitted Israel as the 59th member of the United Nations.

Arab-Israeli tensions constituted the major problem. Their relation was a heavy strain on the nation's resources and was responsible for the internal state of military preparedness and censorship.

The outcome of the war also affected Israel’s relations with other nations interested in maintaining a balanced position regarding both sides. The Arab states’ international position of non-alignment enabled them to secure military and economic aid from both the East and the West. The United Arab Republic (U.A.R), which became the spearhead of the Arab anti-Israel position, benefited in particular from Communist-bloc arms aid. The Israeli’s determination to maintain their concept of military parity, led in 1956 to military actions against the U.A.R. forces in the Sinai Peninsula. Rapidly overcoming U.A.R. defences, Israeli troops advanced up to the Suez Canal. The international aspect of the Arab-Israeli conflict was reflected in the early military involvement of Great Britain and France in the Sinai struggle, as well as in the diplomatic involvement of the United States and the Soviet Union. Border clashes also continued, especially with Syrian and Jordan forces, and the military situation remained serious and explosive.

If one calculates the period of civil war that preceded the conflict mentioned above, the first Arab-Israeli war caused Israel to lose about 5,800 people (of which 500 were civilians and women). Such number represents 1% of Israel’s population. The war also caused 12,000 people to be seriously injured.

It was one of the most bloody wars for Israel. On the Palestinian side, the number of victims has never been accurately counted. In 1950, Amin al-Husseini stated that the war had caused around 12,000 dead. According to Rosemarie Esber, Palestinian losses amounted to 20,000. On the other hand, in 1950 Egypt declared 1,400 dead and 3,700 disabled. Jordanians, Iraqis, and Syrians suffered several hundred deaths, whereas the Lebanese a few dozens. 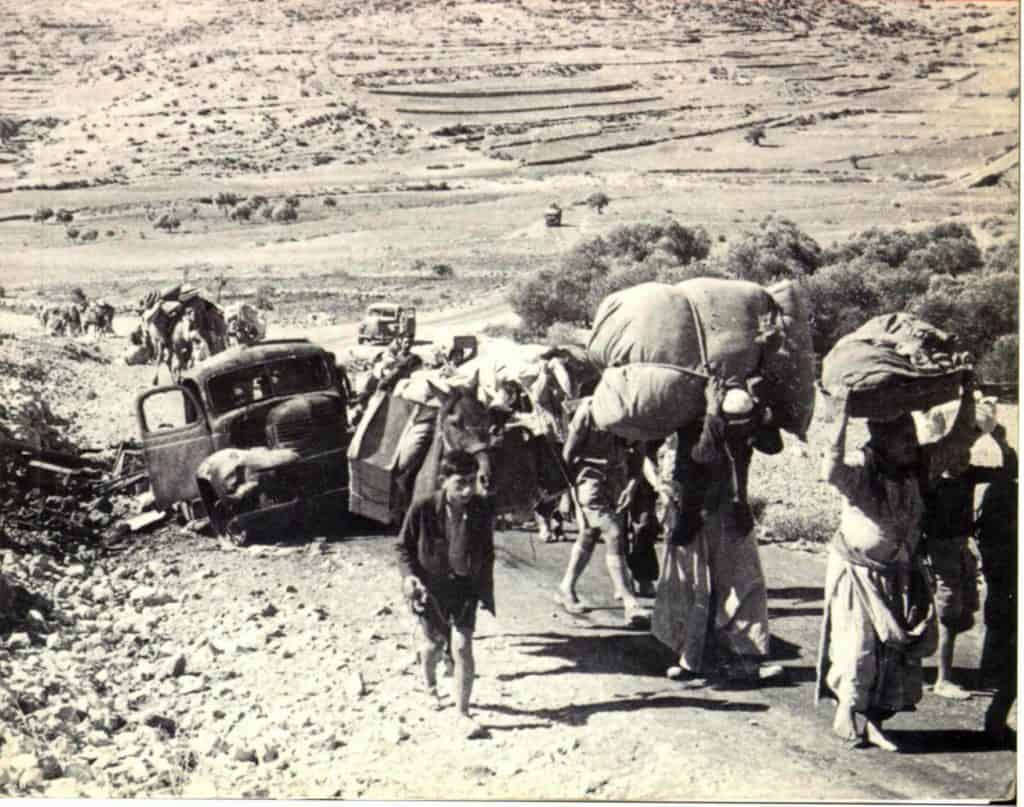 Demographically, the population of the region was profoundly altered.

The conflict has caused the exodus of about 720,000 Palestinian Arabs out of the 900,000 who lived in what has become Israel. It has also caused the exodus of all 10,000 Jews living outside these borders. The war and the foundation of Israel also triggered the massive exodus of Jews from Arab countries. In 1970, nearly 600,000 of them emigrated to Israel in order to form the Sephardic community of Israel. Some 150,000 Palestinians remained in Israel and were granted Israeli citizenship though with differentiated rights (except for the Druze who were allied with the Israelis and thus, were given equal rights). However, more than 35,000 people living along the borders were displaced or expelled. Refugees, on the other hand, mainly settled in Transjordan, Gaza, Jordan, Lebanon, and Syria Jordanian citizenship.

[2.] Khalidi, Walid (1987). From Haven to Conquest: Readings in Zionism and the Palestine Problem Until 1948. Institute for Palestine Studies