Do you want to save dozens of hours in time? Get your evenings and weekends back? Be able to teach Karl Marx and Marxism to your students? 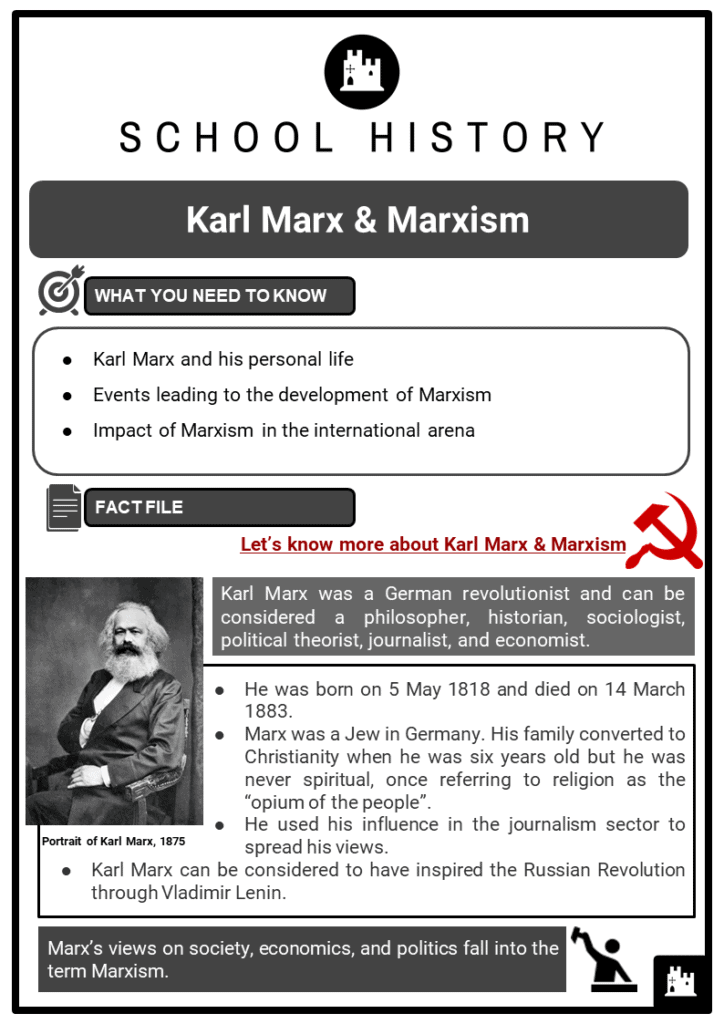 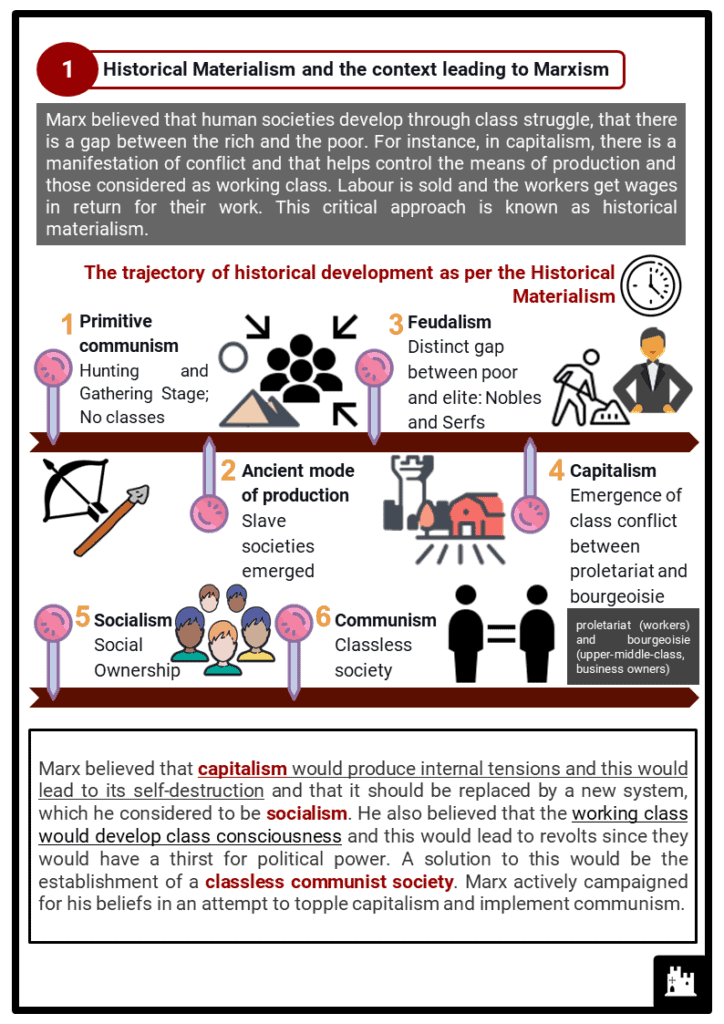 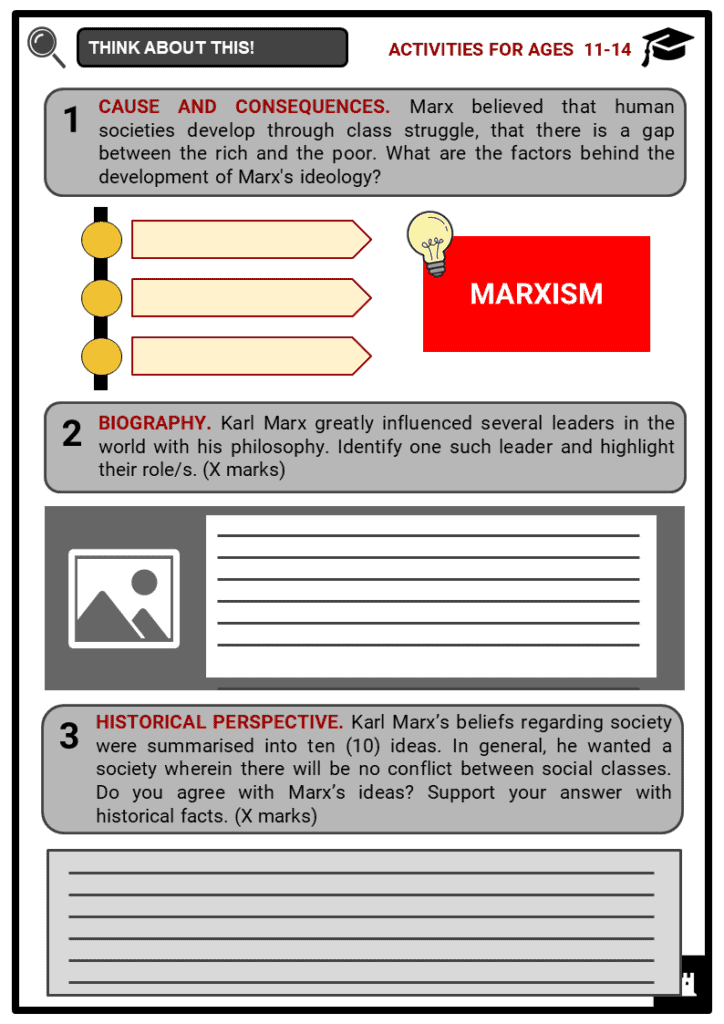 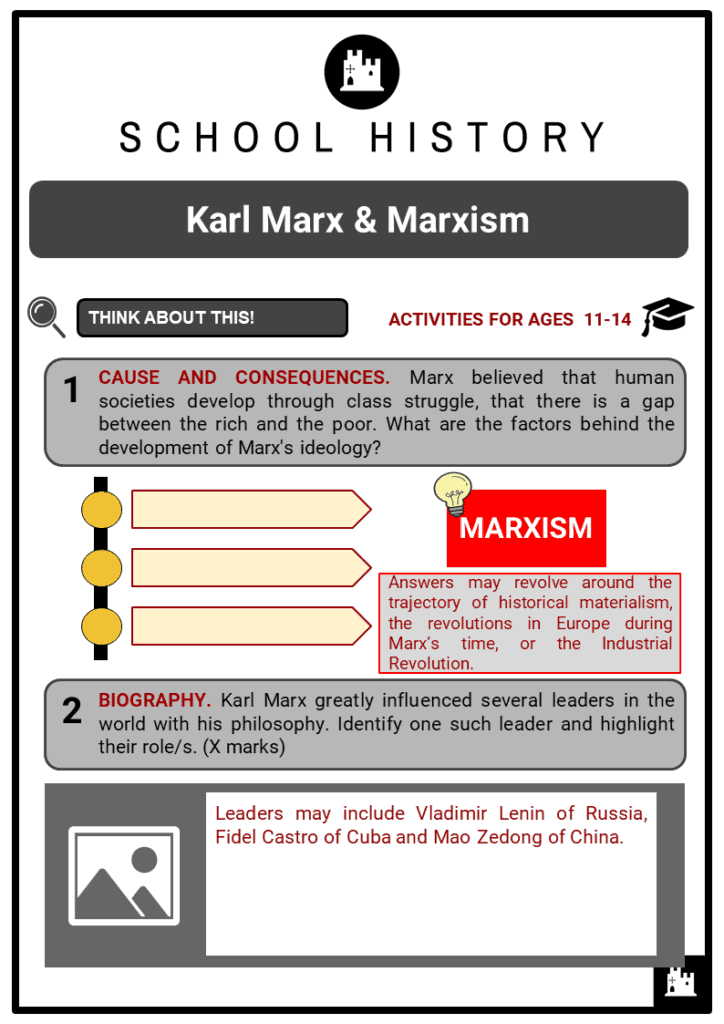 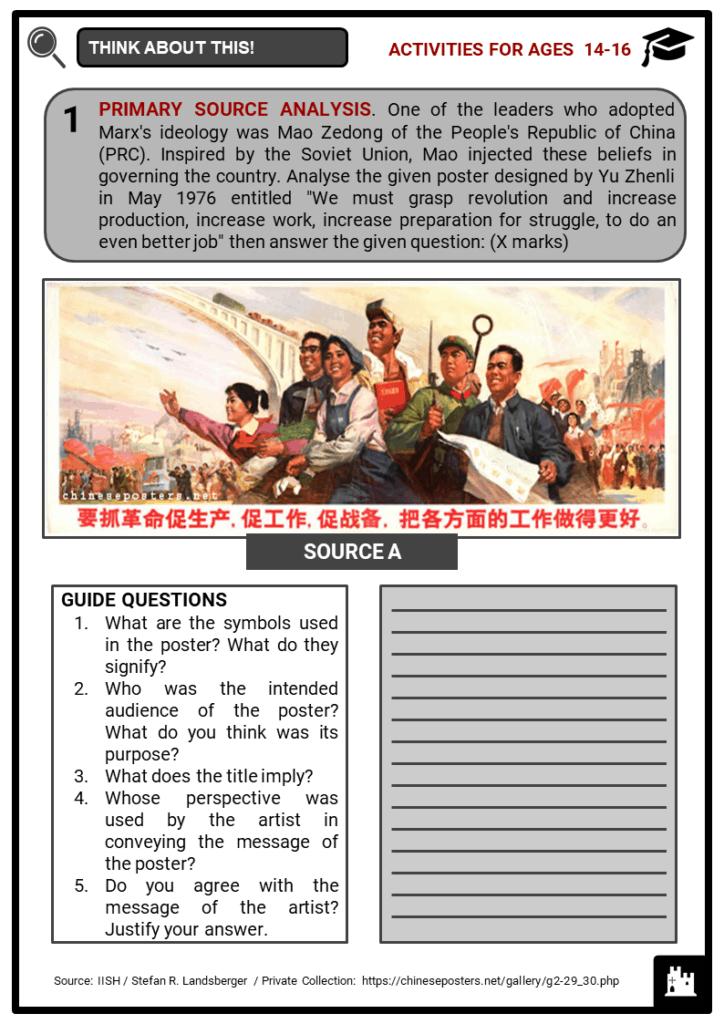 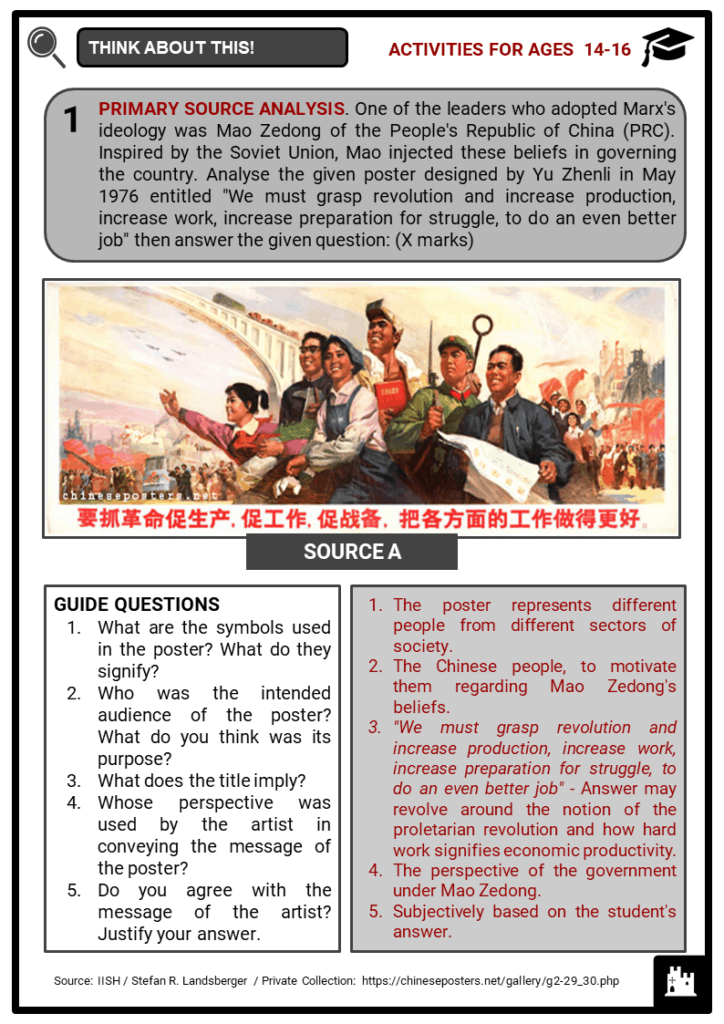 Marx believed that human societies develop through class struggle, that is the gap between the rich and the poor. For instance, in capitalism, there is a manifestation of conflict and that helps control the means of production and those considered as working class. Labour is sold and the workers get wages in return for their work. This critical approach is known as historical materialism. Marx believed that capitalism would produce internal tensions and this would lead to its self-destruction and that it should be replaced by a new system, which he considered to be socialism. He also believed that the working class would develop class consciousness and this would lead to revolts since they would have a thirst for political power. A solution to this would be the establishment of a classless communist society. Marx actively campaigned for his beliefs in an attempt to topple capitalism and implement communism.

This was done through the Rheinische Zeitung newspaper where Marx was an editor. The views expressed in it quickly attracted the attention of the authorities and he was soon suppressed. He travelled to Paris but was evicted from France in 1845 and moved to Brussels. There he helped in the growth of the Communist League. In 1848, Marx gained the support of Friedrich Engels, a rich businessman and scientist and together they accomplished the Communist Manifesto, which was a collection of others’ beliefs compiled into one document. The manifesto implied that all men were born free but that society had chained most of them. Engels referred to the book as being the “very way of life”.

Marx admitted that his thinking was not original but he had the knack of interweaving other people’s ideas into one. He wrote a book that was meant to revolutionise society. Marx and the book showed keen interest in Hegelian philosophy. He studied Hegel philosophy at university but eventually rejected most of it as he believed that Hegel had mixed issues up.

When a wave of revolutions hit Western Europe in 1848, Marx was shrewd enough to want to use this chain of revolutions to his advantage. He left Belgium just before he was evicted by the country’s government, briefly returning to Paris then onto Germany where he used the Rheinische Zeitung newspaper to publish ten of his beliefs, which were:

Karl Marx eventually decided to settle in London where he spent the rest of his life, even though he was denied British citizenship. He worked as a journalist, where ten years were spent as a correspondent for the New York Daily Tribune, but he never earned much in the way of a salary and was financially supported by Engels. As time passed Marx became increasingly detached from his fellow London Communists and decided to focus more on developing his own economic theories. He helped found the International Workingmen’s Association, and wrote its inaugural address in 1864. Three years later he published the first volume of Capital, his masterpiece showcasing his economic theories. For the rest of his life, Marx worked on manuscripts and additional volumes to his masterpiece, but some remained unfinished at the time of his death on March 14, 1883.

Marxism made people aware of the society they lived in. There were those who agreed with eight of his ideas but criticised two, and others supported only half of his ideas. This led to some criticism of the main issue that he undervalued non-economic forces and that he emphasised his beliefs on the economy at the expense of non-economic relevant issues. His critics thought that he failed to take into account cultural patterns and traditions. He was also criticised for being vague and that most of his ideas were open to interpretation.

Karl Marx and Friedrich Engels’ belief in Communism caused revolutions all over the world, some of the most famous being in Russia (Vladimir Lenin’s coup removing the Russian Tsar), and Mao Zedong's Chinese Revolution. How to transition from capitalism to communism was not known. Some communists believed that transition should be slow, steady and gradual in order to be effective. Vladimir Lenin of Russia, Fidel Castro of Cuba, Mao Zedong of China and others believed that the transition should be through a violent uprising and revolution in order for it to be successful. These leaders had their own form of communism, however, which differed from Marx's idea. Nevertheless, they were still heavily influenced by Marx. In 1898, the Russian Social Democratic Party was formed to expand Marx’s beliefs in Russia.

Marxism was a particularly hard belief to apply in Russia as the nation was, in essence, an agricultural nation and Marx had based his beliefs on an industrial society such as Germany or Britain. Being conservative, the lack of education and superstitions that existed in the rural areas of Russia meant that Marx’s ideas were less than welcomed even with his promise of land reform. Marxism needed a great deal of support from the industrial workers and it needed people in Russia to organise these people. Some organised trade unions were easily infiltrated by the police and he needed Lenin to make the industrial workers a group able to push through a revolution. Therefore, another form of communism known as Marxism-Leninism was developed from the original idea. It can be considered as an adaptation of Marxism developed by Vladimir Lenin and it led to the first successful communist revolution.

Without the Communist Manifesto, the USSR would have never been formed and the reaction America had to the "Red Scare" from the rise of the Union of Soviet Socialist Republics would not have influenced much of our modern history and society. The Red Scare can be seen as propaganda that America made in order to create mistrust and fear of communism for the middle and working classes of America.

Those who supported Marx believed that his ideas gave the working class some hope for a better life. They perceived that the workers were being inspired by an intellectual who was on their side and who was fighting for them. In conclusion, Karl Marx is described as one of the most influential figures in human history, and his work has been both appreciated and criticised. His work in economics laid the foundation for the current understanding of labour and its relation to wages and capital. Intellectuals, artists, political parties and labour unions around the world have drawn inspiration from and been influenced by Karl Marx's work, with many modifying his ideas. Marx is typically cited as one of the principal designers of modern social science and economics.