Events During the Korean War 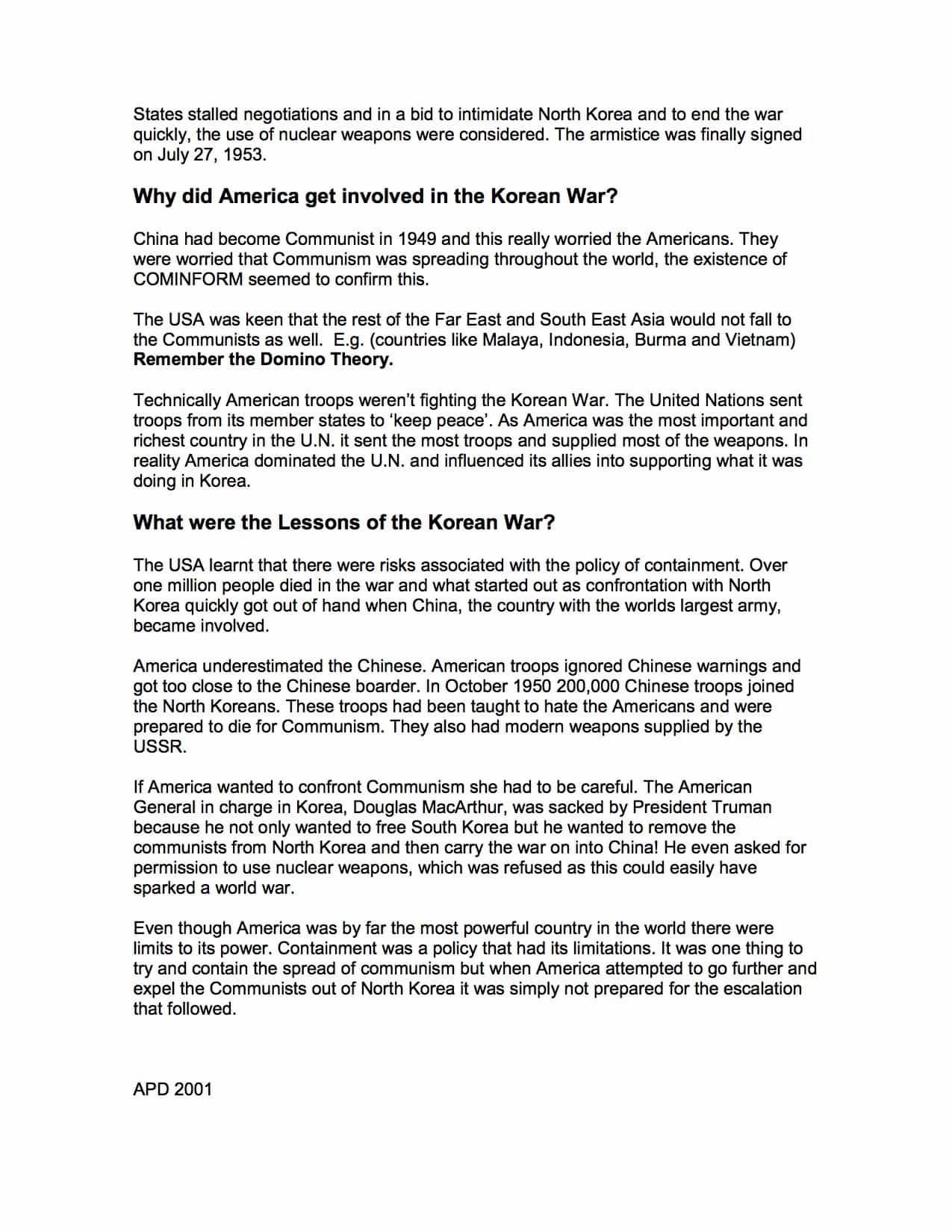 At the end of World War II Korea was split in two. The North was Communist with a leader, Kim il Sung, who had been trained the USSR. The South was anti Communist and its leader Syngman Rhee was backed by the USA. The two leaders detested each other. The hostility between the two states spilled into open warfare in 1950.

From the day when North Koreans attacked South Korea on June 25, 1950 to the day of the armistice on July 27, 1953, At the end of the war, more than 3 million Koreans died while millions of refugees remained homeless and distraught. About 1 million Chinese died in the war and American casualties numbered 54,246 people.

The Korean War can be divided into three phases.

States stalled negotiations and in a bid to intimidate North Korea and to end the war quickly, the use of nuclear weapons were considered. The armistice was finally signed on July 27, 1953.

Why did America get involved in the Korean War?

China had become Communist in 1949 and this really worried the Americans. They were worried that Communism was spreading throughout the world, the existence of COMINFORM seemed to confirm this.

The USA was keen that the rest of the Far East and South East Asia would not fall to the Communists as well. E.g. (countries like Malaya, Indonesia, Burma and Vietnam) Remember the Domino Theory.

Technically American troops weren’t fighting the Korean War. The United Nations sent troops from its member states to ‘keep peace’. As America was the most important and richest country in the U.N. it sent the most troops and supplied most of the weapons. In reality America dominated the U.N. and influenced its allies into supporting what it was doing in Korea.

What were the Lessons of the Korean War?

The USA learnt that there were risks associated with the policy of containment. Over one million people died in the war and what started out as confrontation with North Korea quickly got out of hand when China, the country with the worlds largest army, became involved.

America underestimated the Chinese. American troops ignored Chinese warnings and got too close to the Chinese boarder. In October 1950 200,000 Chinese troops joined the North Koreans. These troops had been taught to hate the Americans and were prepared to die for Communism. They also had modern weapons supplied by the USSR.

If America wanted to confront Communism she had to be careful. The American General in charge in Korea, Douglas MacArthur, was sacked by President Truman because he not only wanted to free South Korea but he wanted to remove the communists from North Korea and then carry the war on into China! He even asked for permission to use nuclear weapons, which was refused as this could easily have sparked a world war.

Even though America was by far the most powerful country in the world there were limits to its power. Containment was a policy that had its limitations. It was one thing to try and contain the spread of communism but when America attempted to go further and expel the Communists out of North Korea it was simply not prepared for the escalation that followed.