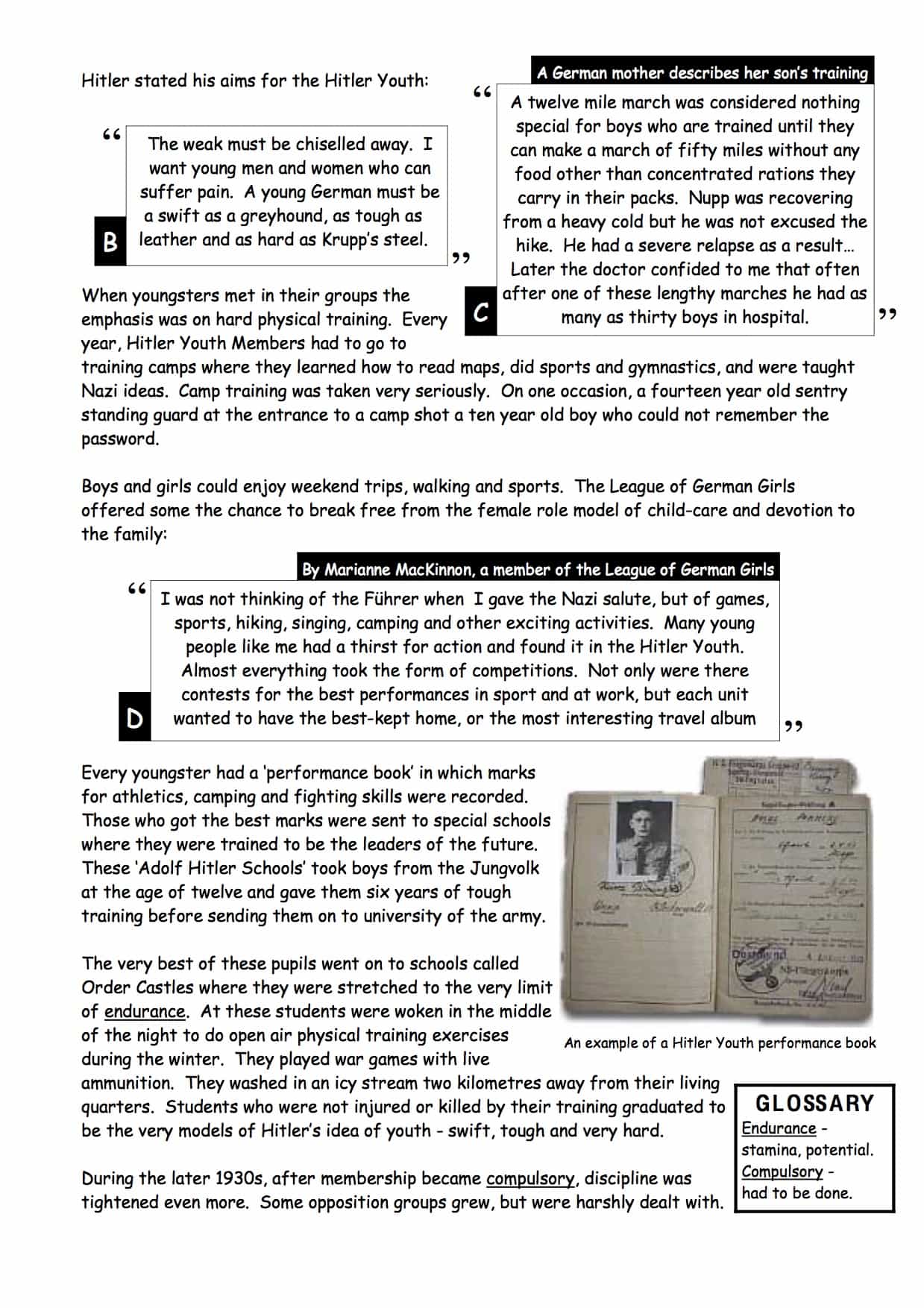 Hitler took great trouble to make sure that young people were loyal to him and to the Nazi party.

Hitler placed such importance on the young people because they were the future of his Nazi policies. He wanted to make children believe in the superiority of the Aryan, the ‘master race’. He wanted young men to value the ideas of discipline, sacrifice and obedience. The most important was Hitler himself – the Führer. All young Germans were taught to see him as a father figure who should be given unquestioned loyalty from his people.

In schools, textbooks were rewritten to paint a good picture of the Nazis. The teaching of school subjects changed to indoctrinate pupils. History was distorted to celebrate great German victories and all disasters were blamed on the Communists and the Jews. Every subject concentrated on putting across Nazi ideas. For example Biology lessons were devoted to studying the differences between races, explaining the greatness of the Aryan race. An example maths problem can be seen on the right.

Teachers had to belong to the German Teachers League and were made to put across Nazi ideas in their lessons. To make sure they knew exactly what to do, teachers had to go on compulsory training during school holidays.

Outside school, young people had to belong to youth organisations which taught them loyalty to Hitler and trained them in military skills. There were five organisations for youngsters to join. Together they made up the Hitler Youth Movement:

By 1938, some eight million young Germans belonged to the Hitler Youth.

When youngsters met in their groups the emphasis was on hard physical training. Every year, Hitler Youth Members had to go to training camps where they learned how to read maps, did sports and gymnastics, and were taught Nazi ideas. Camp training was taken very seriously. On one occasion, a fourteen year old sentry standing guard at the entrance to a camp shot a ten year old boy who could not remember the password.

Boys and girls could enjoy weekend trips, walking and sports. The League of German Girls offered some the chance to break free from the female role model of child-care and devotion to the family:

Every youngster had a ‘performance book’ in which marks for athletics, camping and fighting skills were recorded. Those who got the best marks were sent to special schools where they were trained to be the leaders of the future. These ‘Adolf Hitler Schools’ took boys from the Jungvolk at the age of twelve and gave them six years of tough training before sending them on to university of the army.

The very best of these pupils went on to schools called Order Castles where they were stretched to the very limit of endurance. At these students were woken in the middle of the night to do open air physical training exercises during the winter. They played war games with live ammunition. They washed in an icy stream two kilometres away from their living quarters. Students who were not injured or killed by their training graduated to be the very models of Hitler’s idea of youth – swift, tough and very hard.

During the later 1930s, after membership became compulsory, discipline was tightened even more. Some opposition groups grew, but were harshly dealt with.