Do you want to save dozens of hours in time? Get your evenings and weekends back? Be able to teach Ngo Dinh Diem to your students? 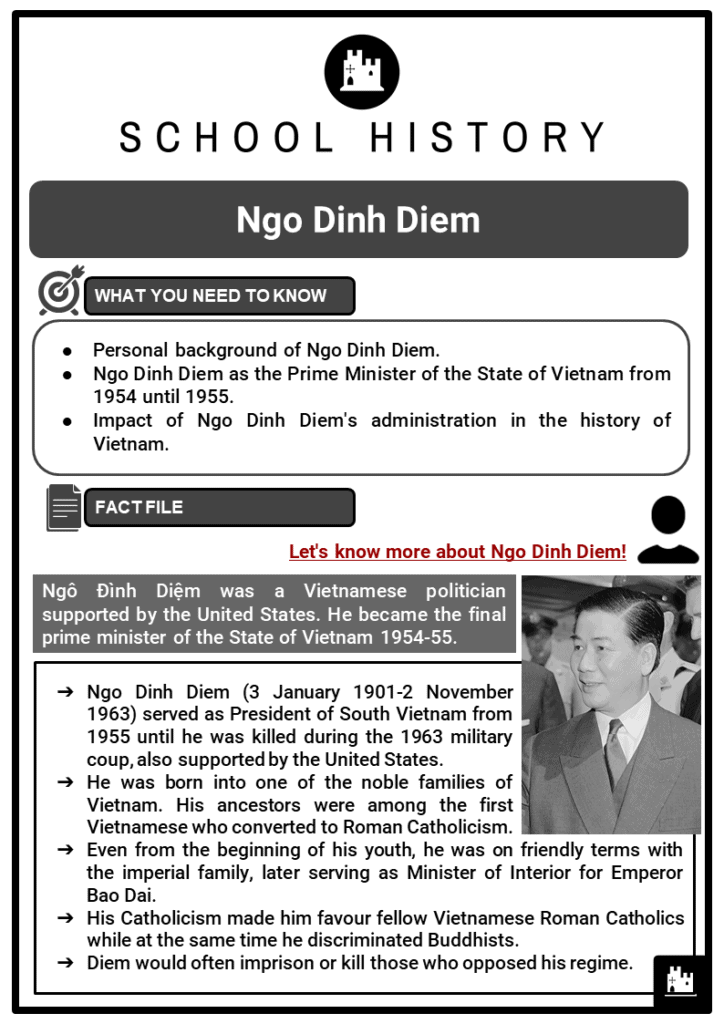 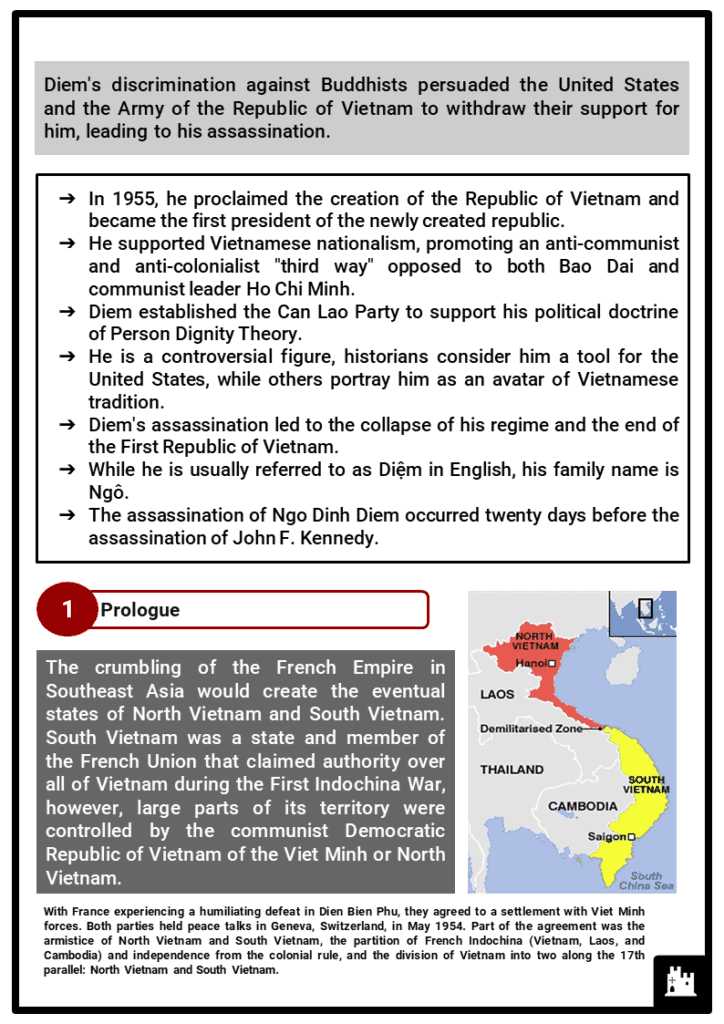 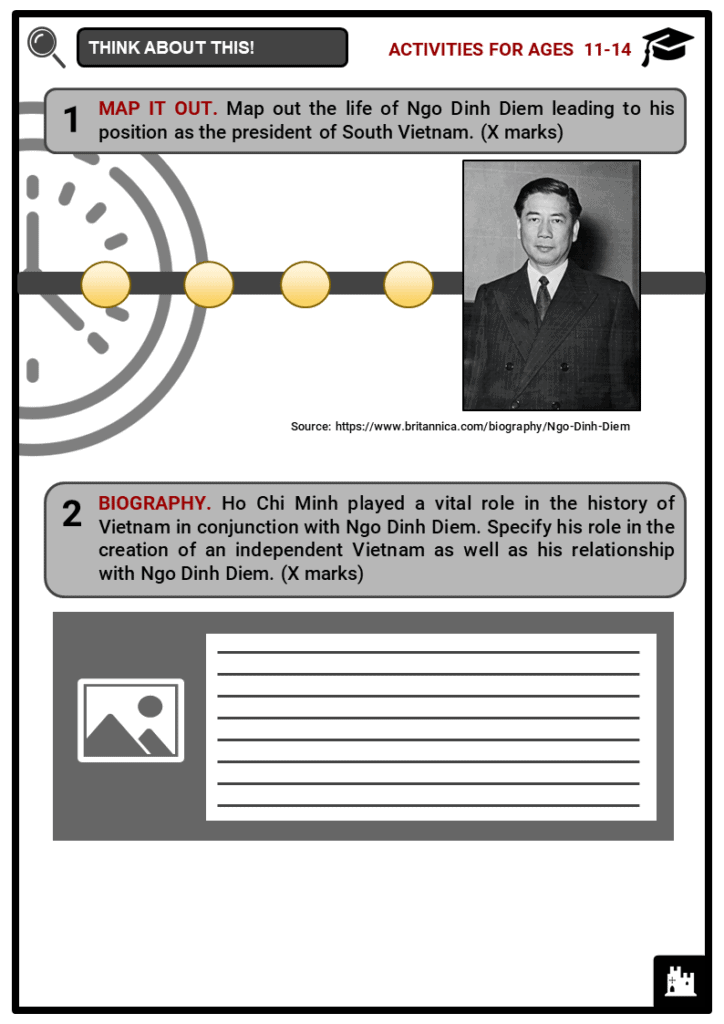 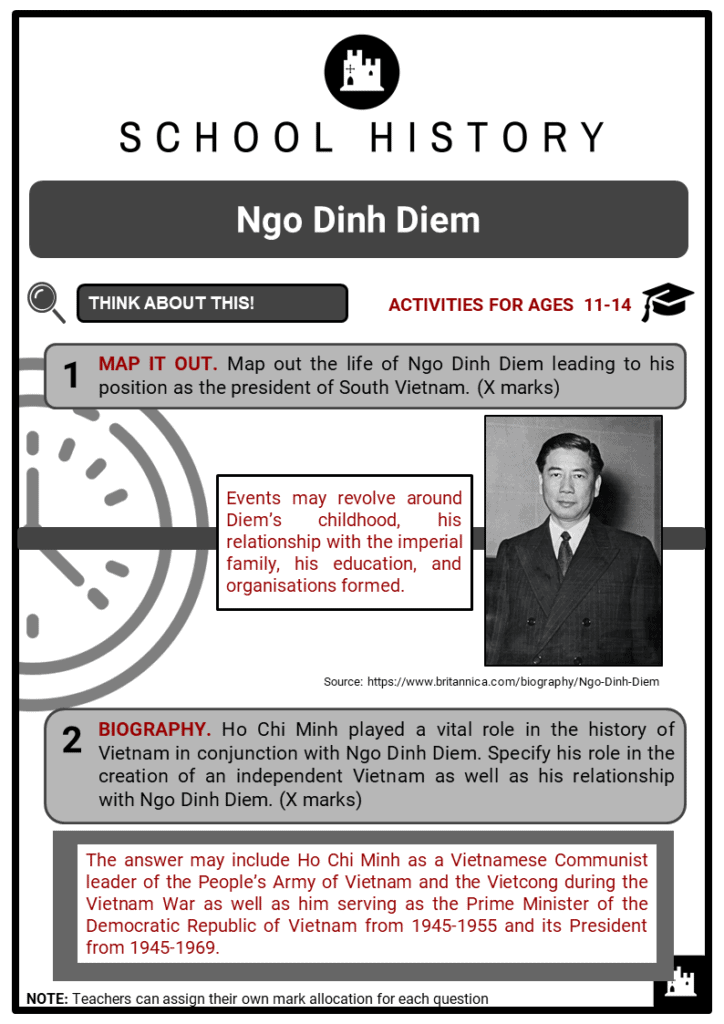 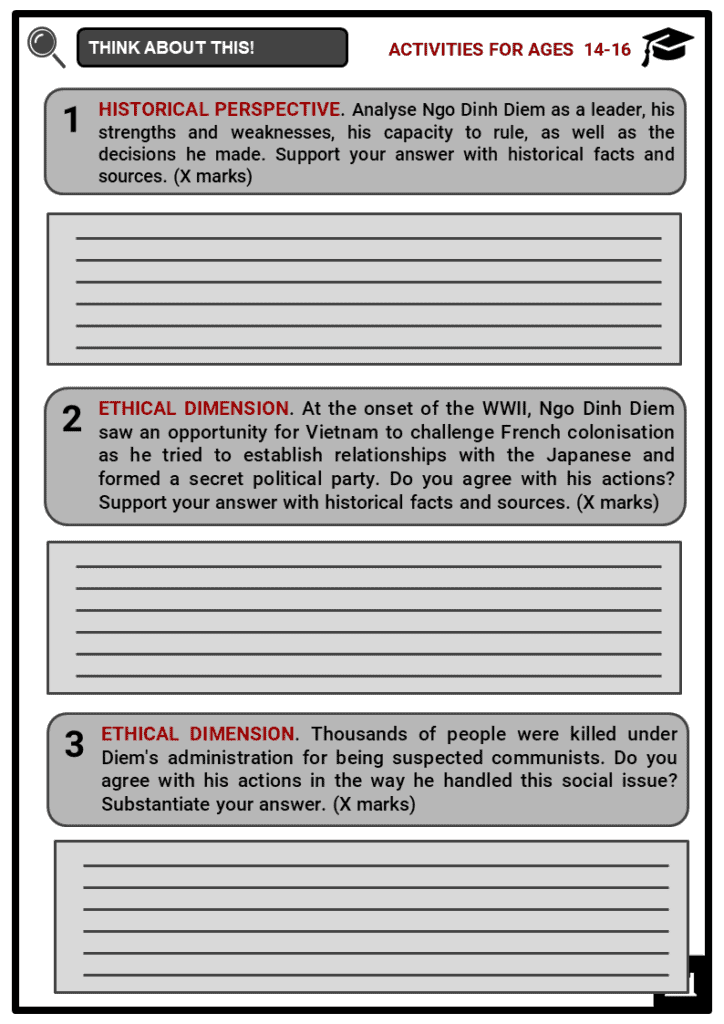 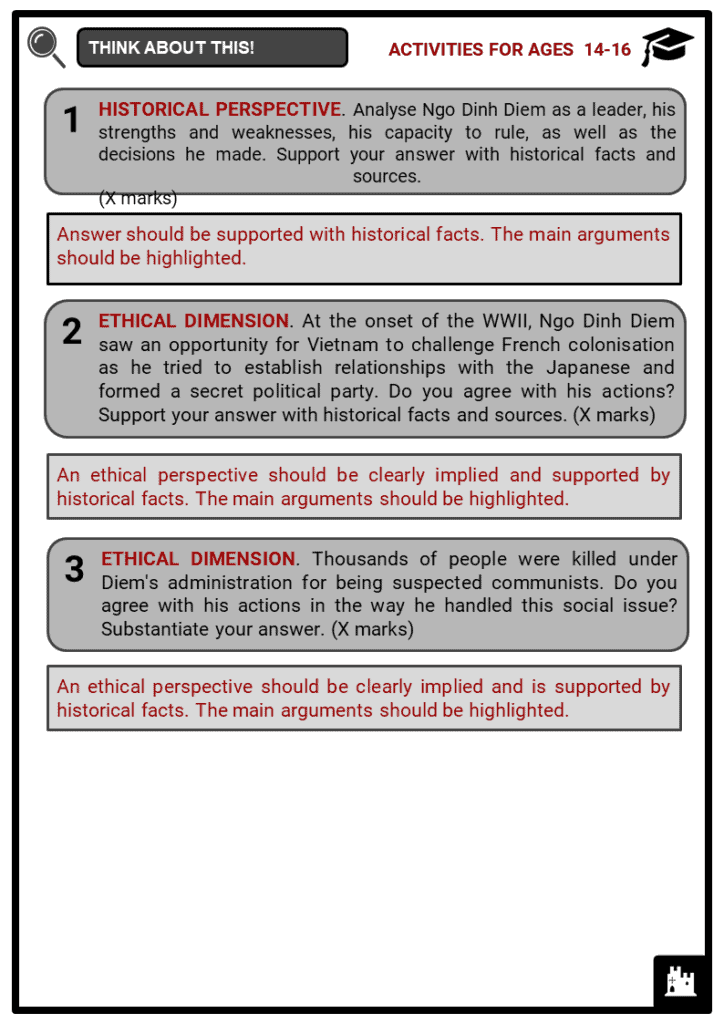 The crumbling of the French Empire in Southeast Asia would create the eventual states of North Vietnam and South Vietnam. South Vietnam was a state and member of the French Union that claimed authority over all of Vietnam during the First Indochina War, however large parts of its territory were controlled by the communist Democratic Republic of Vietnam of the Viet Minh or North Vietnam.

The Viet Minh was a national independence coalition formed by Ho Chi Minh in 1941 and were an anti-French and anti-Japanese group. They sought independence from France and for the whole of Vietnam.

South Vietnam was a state created in 1949 by France and internationally recognized in 1950. Former Emperor Bao Dai became Chief of State and after the 1954 Geneva Agreements, South Vietnam had to abandon the northern part of the country to the Democratic Republic of Vietnam. Ngo Dinh Diem was appointed prime minister in 1954 and after ousting Bao Dai in 1955, he became president of the Republic of Vietnam with the backing of the United States. 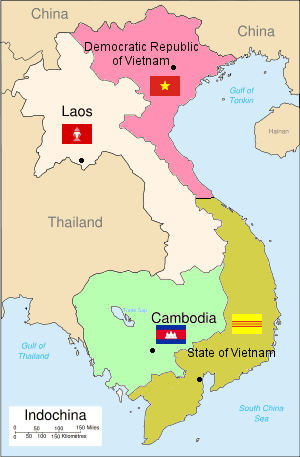 Born in 1901 in central Vietnam, Ngo Dinh Diem’s family originated from Phu Cam Village, a Catholic village near Hue City. His family had been among the first to convert to Catholicism in the 17th century. The family suffered under the anti-Catholic persecutions of Emperors Minh Mang and Tu Duc.

His father was educated in a Catholic school in British Malaya, where he learned English and studied the European culture. Being a devout Catholic he scrapped plans to become a Roman Catholic priest in the late 1870s. He worked for the commander of the French armed forces as an interpreter and took part in campaigns against anti-colonial rebels. He soon became a high-ranking Mandarin and a counselor to Emperor Thanh Thai under the French colonial regime. He wanted to make sure his children were well educated in both Christian and Confucian classics. 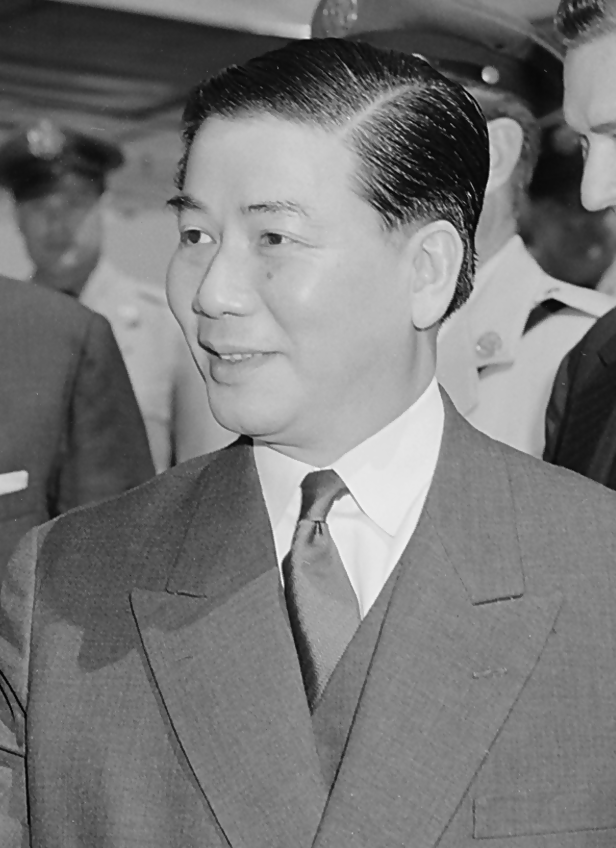 During his childhood Diem labored the rice fields while studying at a French Catholic school, and later entered a private school started by his father. Diem’s elder brother, Ngo Dinh Thuc went on to become Vietnam’s highest-ranking Catholic bishop, into seminary. Due to his family’s background, education and especially Catholicism and Confucianism, Diem would show off these influences in his later life especially in his career and politics.

During his career as a Mandarin, Diem created his reputation as a workaholic, incorruptible, nationalist Catholic leader. Catholic nationalism in Vietnam during the 1920s and 1930s facilitated Diem’s ascent in his bureaucratic career. His rise was also facilitated through his brother’s marriage to the daughter of the Catholic head of the Council of Ministers at the Hue court. 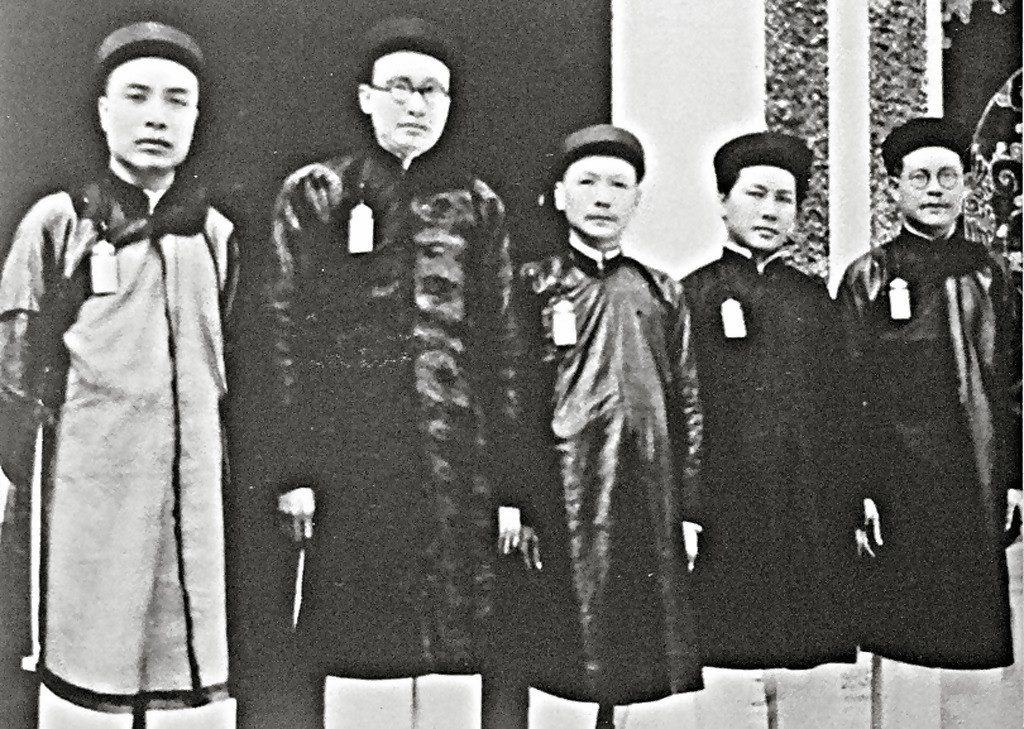 Nguyen Huu Bai, the Minister of the Interior of the Royal Court, was highly impressed by Diem’s religious and family ties and thus became his patron. Upon encountering communists distributing propaganda, he became revolted and started distributing his own pamphlets and engaged in anti-communist activities. In 1929, Diem was promoted to the governorship of Binh Thuan Province. In 1930-1931 he helped the French to suppress peasant revolts organized by communists. With the ascension of Bao Dai to the throne in 1933, Diem received an invitation to become his interior minister. He accepted but after his proposals for reforms were rejected, he resigned. Diem denounced Emperor Bao Dai as a puppet for the French. 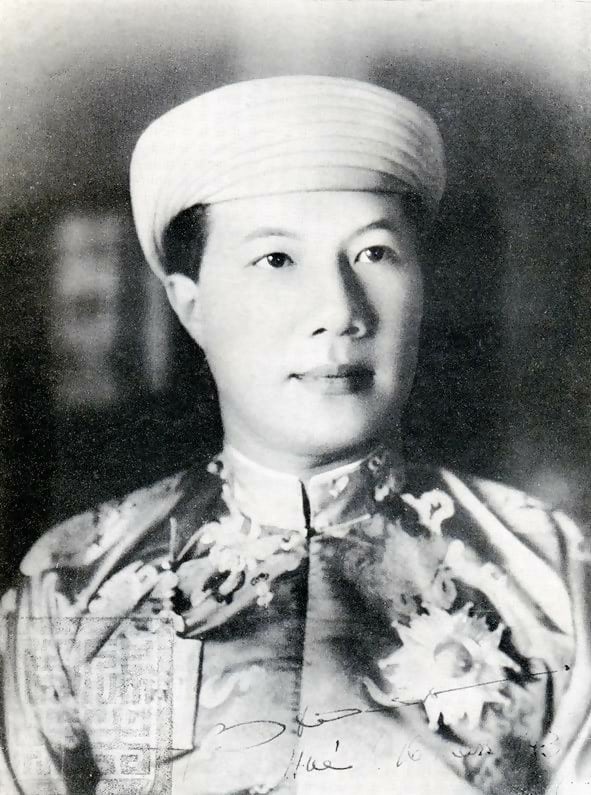 The French threatened Diem with arrest and exile, the next decade he conducted extensive nationalist activities, corresponding with various Vietnamese revolutionaries, such as his friend Phan Boi Chau, a Vietnamese anti-colonial activist whom Diem greatly respected. They concluded that Confucianism teachings could be applied to a modern Vietnam. World War II started and Diem saw an opportunity for Vietnam to challenge French colonization. He tried to establish relationships with the Japanese and formed a secret political party.

This was named the Association for the Restoration of Great Vietnam but its existence was discovered in 1944 and the French ordered Diem’s arrest. He fled to Saigon under Japanese protection where he would remain until the end of the war. Ho Chi Minh proclaimed the Democratic Republic of Vietnam, and in the Northern half of Vietnam his Viet Minh began fighting the French. Diem wanted to dissuade Bao Dai from joining Ho Chi Minh but was captred by the Viet Minh and was exiled again. Later he was taken to Ho Chi Minh where he received an offer from him to become minister but Diem declined. 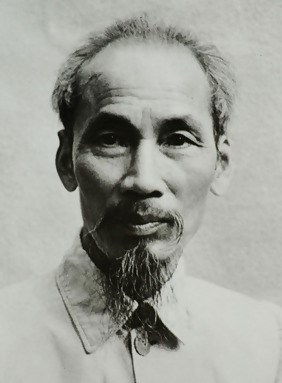 In this period of time, Diem and the other non-communist nationalists faced a dilemma. They didn’t want to restore colonial rule nor wished to support the Viet Minh, as such Diem declared his neutrality and attempted to establish a Third Force movement that would be both anti-colonialist and anti-communist. He united non-communist Vietnamese and also maintained secret contact with high-ranking leaders of the Democratic Republic of Vietnam in an attempt to persuade them to leave Ho Chi Minh’s side and join his.

Bao Dai signed an agreement to grant Vietnam status as an “associate state” within the French Union, much to Diem’s disappointment. The French then created the State of Vietnam and Diem refused to become Bao Dai’s prime minister. He publicly declared in newspapers his manifesto about a third force opposite the Viet Minh and Bao Dai, but little people showed interest in it and the Viet Minh and French now knew that he was a threat. A couple of failed assassination attempts forced Diem to run into exile yet again.

Diem traveled to Japan and Rome. In Japan he met with Prince Cuong De, a former ally, and they discussed their efforts concerning Vietnam. Cuon De introduced Wesley Fishel to Diem. He was an American working for the CIA. Fishel was a proponent of the anti-colonial, anti-communist third force doctrine in Asia. He helped Diem organize connections in the United States, and in 1951 Diem went there. The Americans assessment of Diem were varied, however he gained favor with high-ranking officials such as: William Douglas, Francis Spellman, John F. Kennedy the legendary spy chief of the CIA William J. Donovan and many others. These connections would help him in the future.

Following the Geneva Conference in 1954, Diem met with Bao Dai and agreed to be the Prime Minister if he would receive military and civilian control. Diem was successful and established his new government. He criticized the French for abandoning North Vietnam to the Communists at Geneva.

Diem faced a lot of challenges upon his new position, his enemies where everywhere and they were helped by the French who wanted to remove him from power. However, Diem established the National Bank of Vietnam, attacked his enemies, defeated Binh Xuyen and thus marked the end of French interference and plots to remove him. 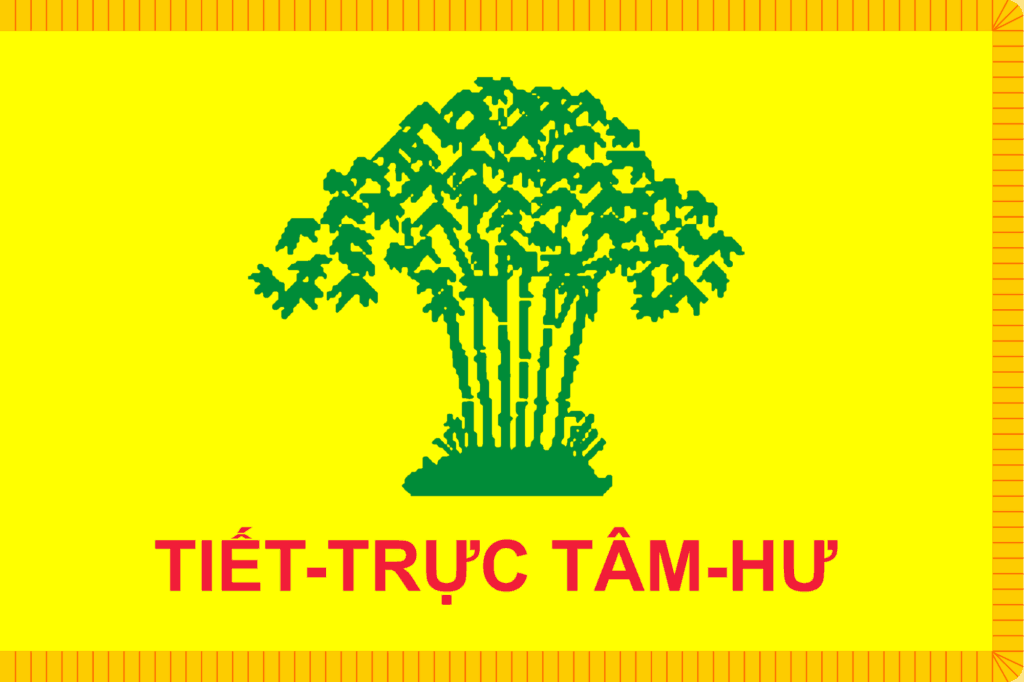 According to Miller, Diems capacity in subduing his enemies and consolidating power, strengthened US support of his government. A referendum was soon scheduled in 1955 that would determine the direction of South Vietnam. Diem and Bao Dai were participating in elections for presidency. Supporters of Diem used propaganda to destroy Bao Dai’s reputation, stopped his supporters from voting and when the official results of the votes came in, they were clearly fraud. This is when Diem proclaimed the Republic of Vietnam, with himself as its first President.

The Can Lao Party played a key role in Diem’s regime, when necessary they would assume the role of the government. According to Miller, democracy to Diem was rooted in his dual identity as Confucian and Catholic, and was associated with communitarianism and the doctrine of Personalism. However, Diem’s regime of “democratic one man rule” faced increasing difficulties. After pressures from both the United States and Vietnam he agreed to hold legislative elections. However, Diem applied censorship in the press, candidates faced harassment, and intimidation leaving no chance for anyone to step in his shoes. U.S Vice President L.B. Johnson visited Saigon and declared Diem the “Winston Churchill of Asia”. 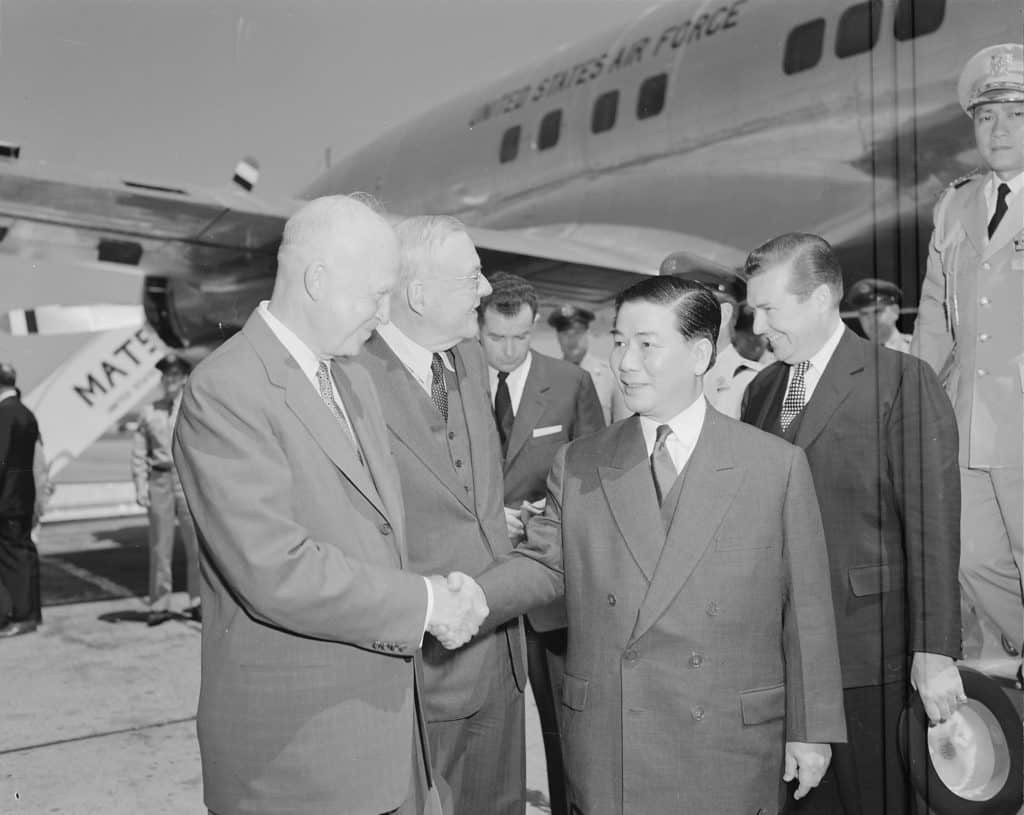 During his presidency, Diem imposed programs to reform Saigon society, brothels and opium dens were closed, divorce and abortion were made illegal, and adultery laws were strengthened. Many schools and universities were established and the preservation of Vietnamese traditional culture was preserved. In the economic section key factors were pointed out, a developed economy, support for local capitalists, stabilized currency, reduced budget deficits, enhanced building infrastructure. In 1957, Diem’s government suggested the 5 year plan, which aimed at expanding cultivated area to 20% and improving agricultural production to 25%.

The government also encouraged the development of handicrafts, industry, commerce and other actions to diminish the role of foreign capitalists and enhance the role of indigenous capitalists. While making these reforms, Diem also concentrated on eliminating communists.

Thousands of people were killed by his secret police, even if they were just suspected of being communists. There were many assassination attempts on Diem, but he managed to protect himself. The way in which he handled the communists created a sense of fear in the general public and the U.S slowly started to drift away from him. The administration of John F. Kennedy ultimately decided to have Diem deposed in late 1963, because of the Buddhist crisis. A couple of months before Diem’s overthrow, Buddhists celebrating the Buddhist birthday in Hue were ordered to take their religious flags down.

There was a government decree that implied that only the national flags could be flown in South Vietnam. The protesting Buddhists pointed out that Diem’s brother, Ngo Dinh Thuc, the Archbishop of Vietnam, was recently celebrated with papal banners. This appeared to be more evidence of the administrations pro-Catholic anti-Buddhist bias. Diem did nothing about this, and another protest in Hue ensued that resulted in a massacre. Government troops fired upon the crowd, people were run over including children who were crushed beneath the tanks. 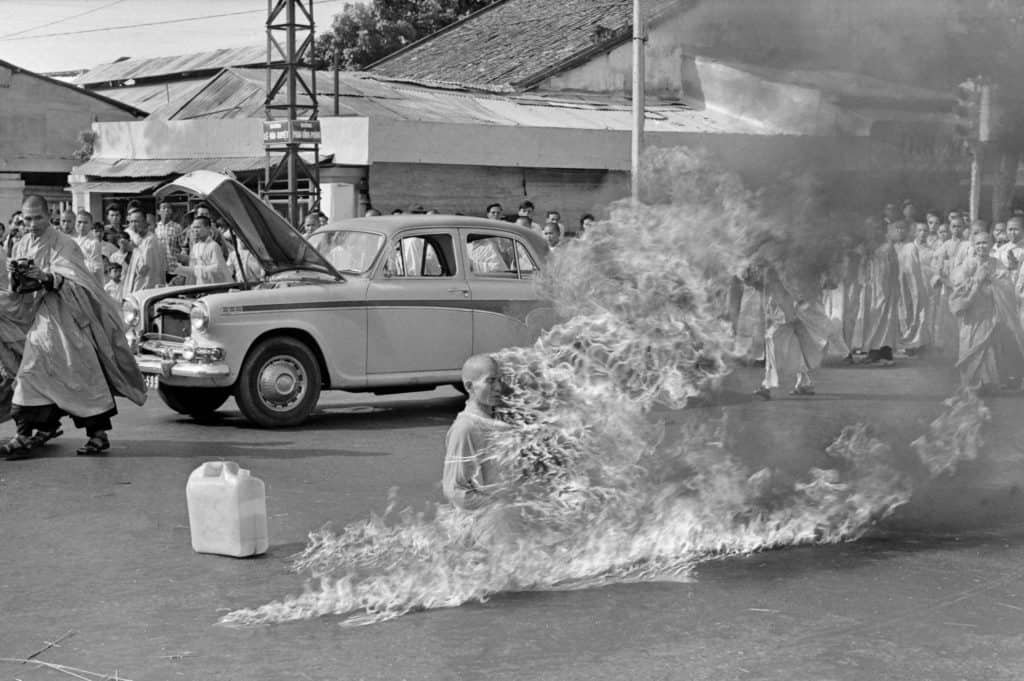 More protests ensued and more people were either arrested or killed until one incident put an end to it. A monk by the name of Thich Quang Duc burned himself alive while other monks and nuns stopped the police from getting close to him. Malcolm Brown, an American photographer captured this moment and the monk became a martyr because of the government’s lack of concern.
The photography appeared in the front page of every newspaper in America and generally in the Western world the next morning. Although Diem hanged on on power for a few moths this is the moment that led to his demise. This wasn’t an isolated incident, a growing number of Buddhist monks and nuns followed Thich Quang Duc’s example and burned themselves alive in protest. Finally in November 1963, a cabal of generals rose up and overthrew Diem. Diem and his brother were shot and stabbed repeatedly and then their bodies were buried in an unmarked grave.

Upon Diem’s death, the regime collapsed and marked the end of the first Republic of Vietnam. Some of Diem’s contributions can however be appreciated, such as his part in resolving the northern refugee crisis, and the general pacification of the country. He had stabilized a South Vietnam that suffered through the first Indochina war and was now partially independent.

The security and normalization factors contributed to the creation of favorable conditions for the economy and the development of education especially through the creation of universities which applied the methods of European and American-style vocational schools.