Do you want to save dozens of hours in time? Get your evenings and weekends back? Be able to teach Russia and World War 1 to your students? 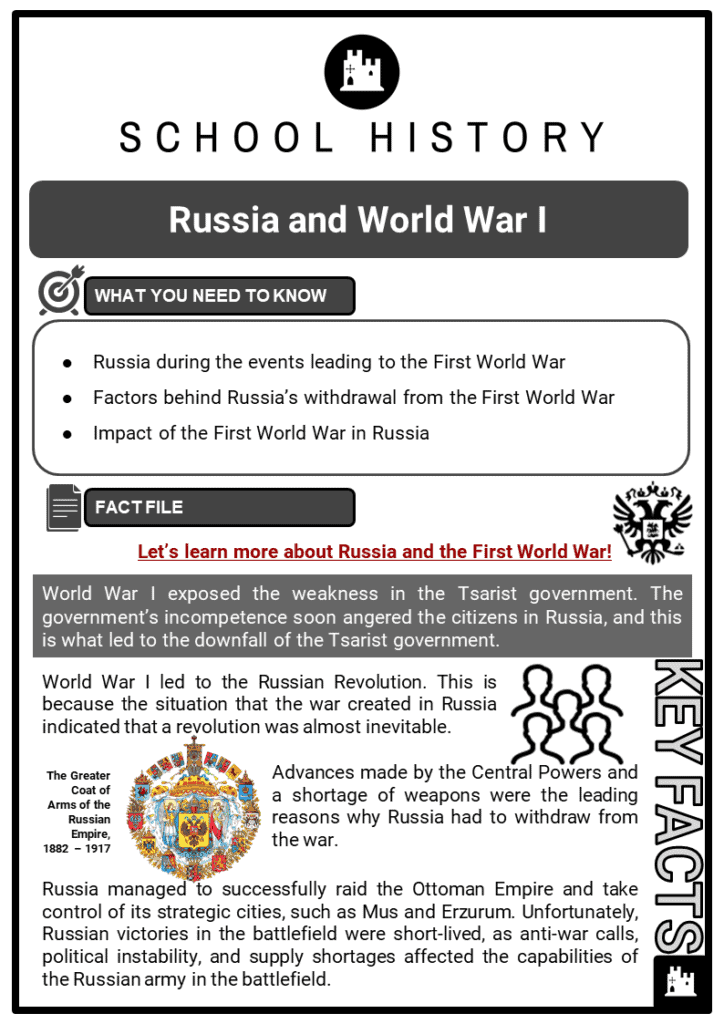 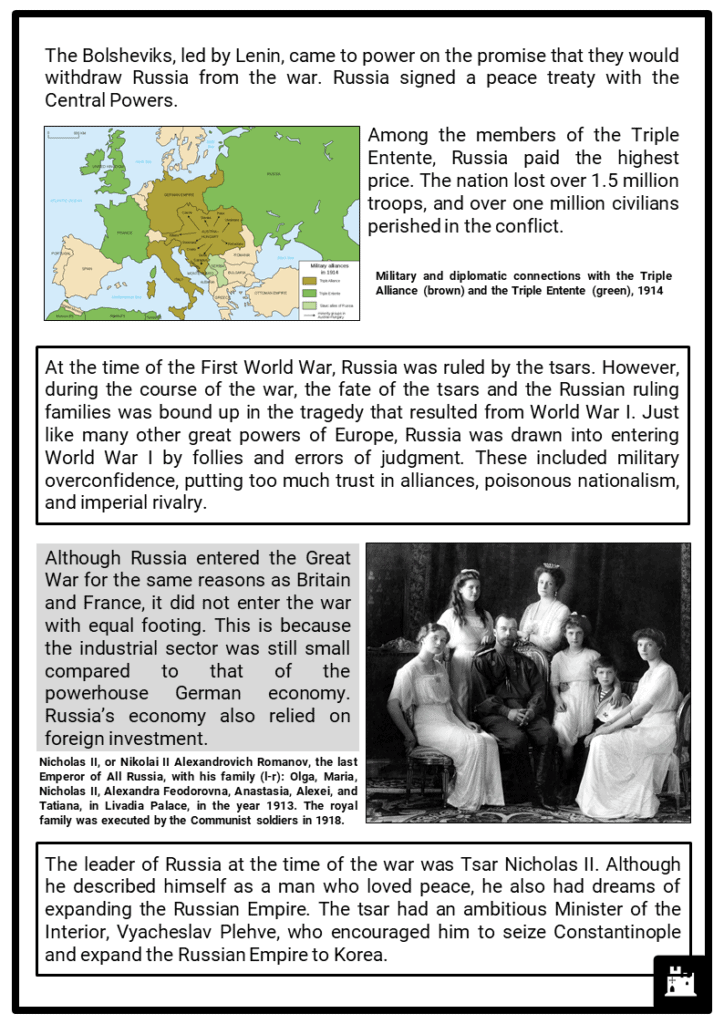 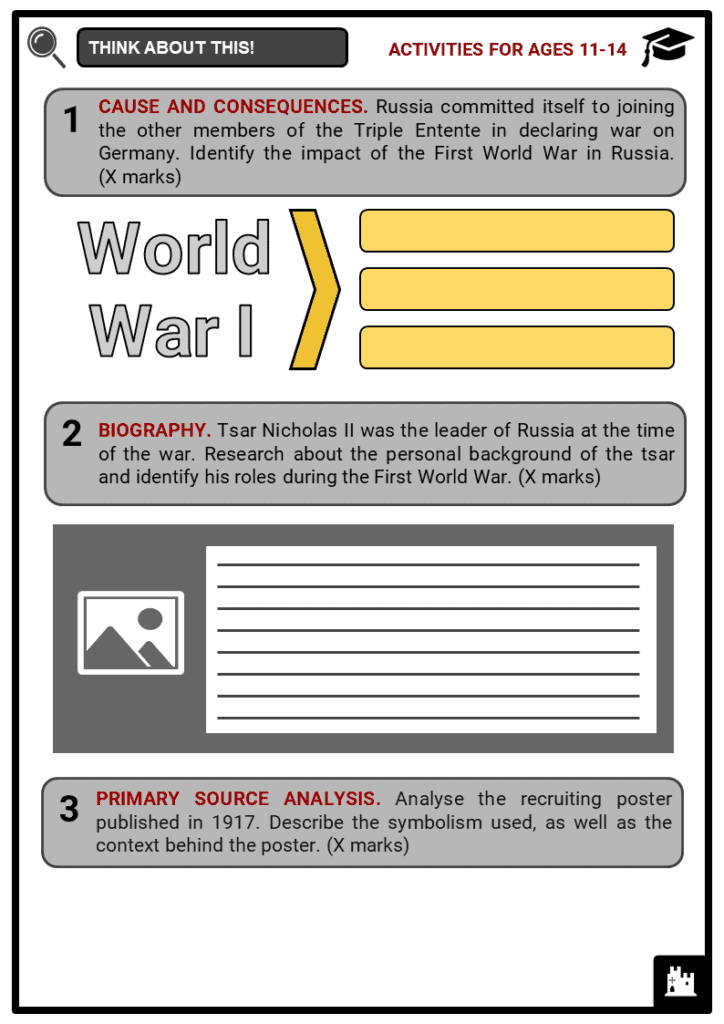 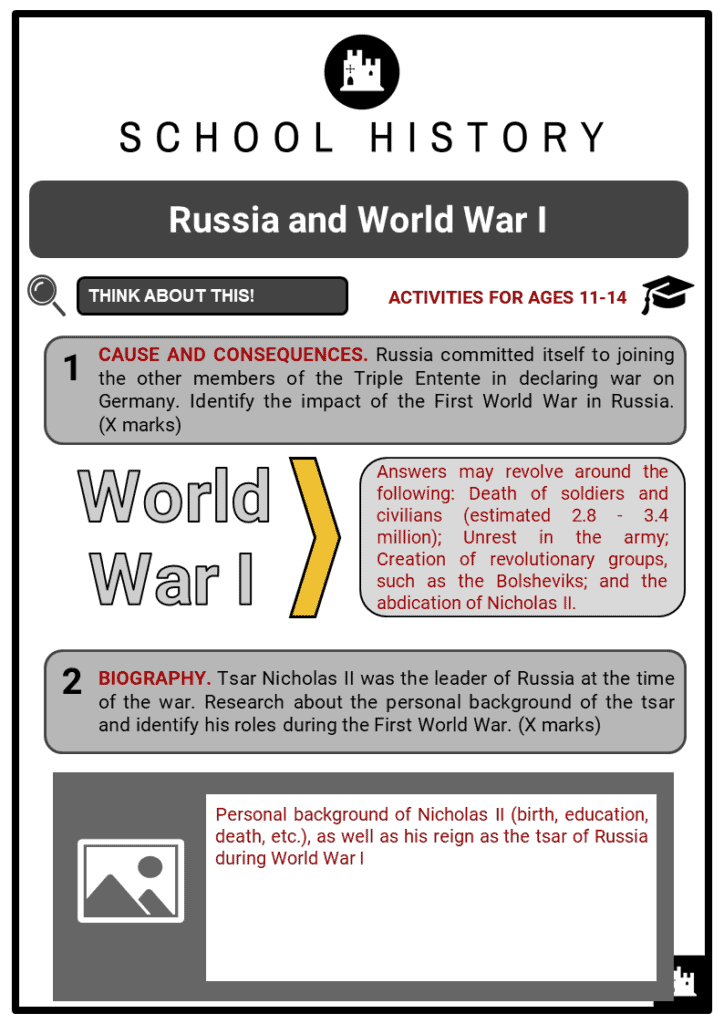 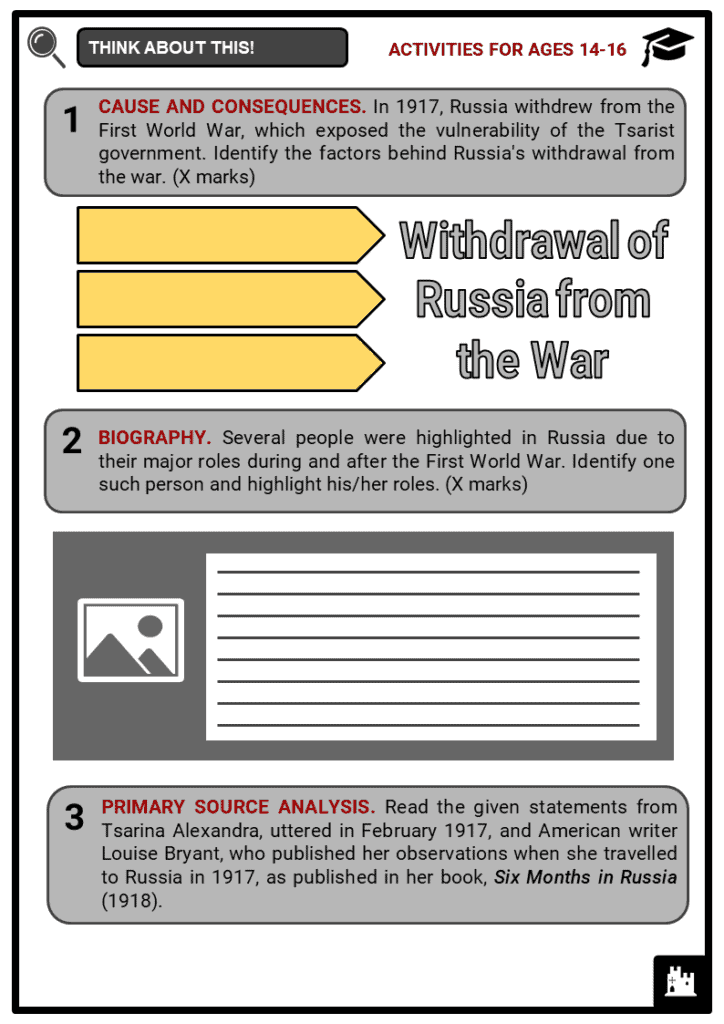 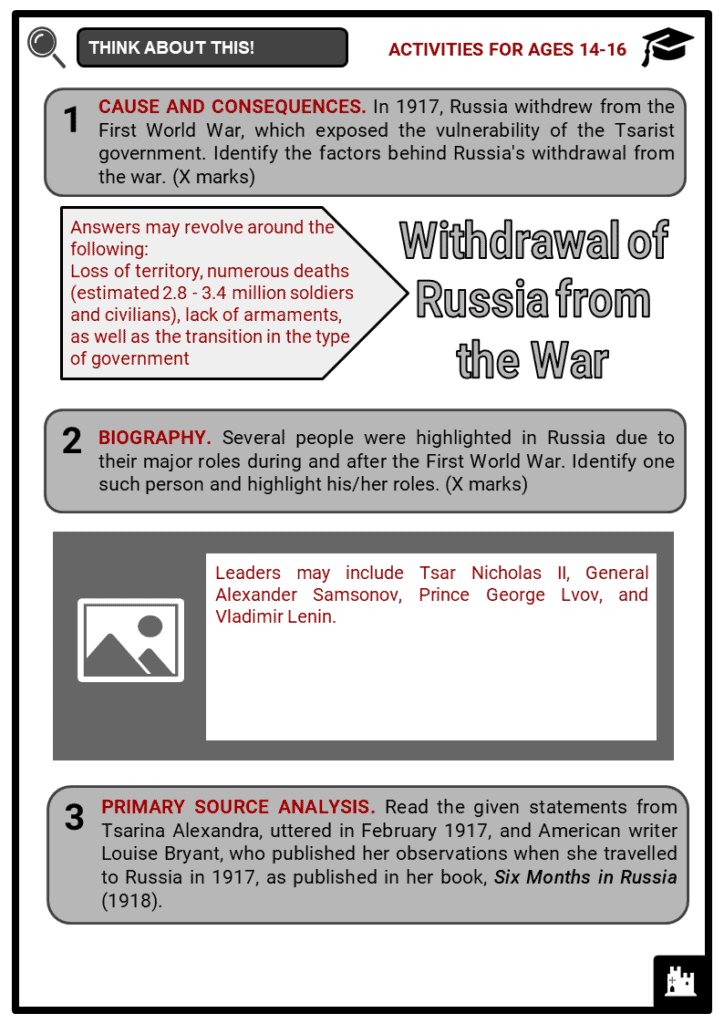 At the time of the First World War, Russia was ruled by the tsars. However, during the course of the war, the fate of the tsars and the Russian ruling families was bound up in the tragedy that resulted from World War 1. Just like many other great powers of Europe, Russia was drawn into entering World War 1 by follies and errors of judgment. These included military overconfidence, putting too much trust in alliances, poisonous nationalism and imperial rivalry.

Although Russia entered the Great War for the same reasons as Britain and France, she did not enter the war on an equal footing. This is because her industrial sector was still small compared to that of the powerhouse German economy. Russia’s economy also relied on foreign investment.

The leader of Russia at the time of the war was Tsar Nicholas II. Although he described himself as a man who loved peace, he also had dreams of expanding the Russian Empire. The tsar had an ambitious Minister of the Interior, Vyacheslav Plehve, who encouraged him to seize Constantinople and expand the Russian Empire to Korea.

In the years leading up to World War 1, Russia and Austria-Hungary had some disputes. The disputed area was in South-East Europe known as the Balkans. Russia had a very close relationship with Serbia, one of the nations in the Balkans. This close relationship between Russia and Serbia concerned Austria because a large number of Serbs were living in Austria and the Austria-Hungarian government feared that the Serbs would demand to be part of Russia.
The Russian government was not on good terms with the German government because Russia considered Germany to be the biggest threat to its territory. Russia’s fears were reinforced by the formation of the Triple Alliance with Austria-Hungary and Italy. Under the terms of the Triple Alliance, the three countries agreed to support each other in case they were attacked by either France or Russia. Russia also joined an alliance with Britain and France to form the Triple Entente.

In 1913, Russia embarked on a process of strengthening its army. The tsar approved a programme to increase the size of the Russian army by 500,000 soldiers. By 1914, Russia had the largest army in the world. The Russian army was made up of 115 infantry and 38 cavalry divisions.

When Archduke Franz Ferdinand was assassinated in Sarajevo in 1914, Russia committed itself to joining the Triple Entente in declaring war on Germany. The Russians hoped that their membership to the Triple Entente would allow them to gain some territories from their neighbours.

When the First World War broke out, the Russian army was under the command of General Alexander Samsonov. His first task was to invade Prussia. He ordered his soldiers to advance slowly into the southwestern part of Prussia so that the soldiers could link up with other Russian soldiers that were advancing from the northeast.

The remaining Russian soldiers were ordered to retreat. By 9 September 1914, Russia had lost all the territories it had gained from the Germans during their early onslaught. The attempted invasion of Prussia had cost Russia 250,000 soldiers.

By the end of 1914, Russia had nearly seven million men, but only five million rifles. Russia ordered some of its untrained troops into battle without proper weapons and adequate ammunition. Many wounded Russian soldiers died because the number of doctors in the Russian camp was very low. For every 10,000 soldiers, there was only one surgeon.

The Russian tsar was disturbed with the news that a third of Russian soldiers had no rifles. According to the report, the poor soldiers had to wait for their comrades to fall in front of their eyes before they could get a rifle. The Russian army was drowning in its own blood.

By 1916, two million Russian soldiers had been killed in combat while 300,000 were taken as prisoners. It is estimated that nearly a third of Russia’s able-bodied men were in the army. Most of these men were peasants. This meant that there were too few peasants to work on the farms. By November 1916, food prices were four times higher compared to before the war. Russian citizens began striking for higher wages.

Lenin, who was living in exile in Switzerland, was shocked by the decisions of most socialists in Europe to support their country’s war effort. Lenin, therefore, strategised to turn the “imperialist” war into a Russian civil war. He published a book titled, Imperialism: The Highest Stage of Capitalism. This book, together with other propaganda, was distributed urging the allied soldiers to abandon the war and start a socialist revolution.

The Russian tsar, Nicholas II, was blamed for the failures of the Russian army and his support in Russia strongly declined. On 1 March 1917, the tsar abdicated and a provisional government, headed by Prince George Lvov, was set up in Russia. Although Lvov attempted to keep Russia in the war, his efforts were thwarted by the formation of the Soldiers’ Committee, which demanded peace without annexations or indemnities.

Due to low morale, the number of soldiers deserting their duties was increasing daily. By the autumn of 1917, nearly two million Russian soldiers had left the army unofficially. Most of the soldiers that deserted returned to their homes and used their weapons to take land away from the nobility. This led to the killing of several landowners and the burning down of manor houses. The provisional government was powerless to intervene in the land conflicts that were causing chaos in the countryside.

The Russian soldiers that had remained on the battlefield continued to launch offensives on the Eastern Front. The Bolsheviks, led by Lenin, took advantage of the political instability in Russia and seized power. Lenin immediately announced an armistice with the Central Powers. He led Russia to negotiate a peace deal with Austria and Germany.

In the negotiation of the peace treaty with the Central Powers, the Russian delegation had a difficult task of ensuring that Russia ceased to be part of the war without giving up any of its territories. After several weeks of discussions without reaching an agreement, the German army was ordered to advance into Russia. On 3 March 1918, Lenin accepted the terms of the Central Powers. This treaty was known as the Brest-Litovsk Treaty. The terms of this treaty were very harsh on Russia and resulted in it surrendering Finland, Ukraine and the Baltic provinces.

By the time Russia had withdrawn from the war, after just two years, the Russian domestic economy was heavily negatively impacted. Apart from the decline in food production, the Russian transportation system was put under enormous strain. This led to inadequate maintenance and replacement of infrastructure that resulted in the total failure of the Russian transport system.

The Russian cities that relied on railway supplies of food and coal were negatively affected. Inflation was also witnessed in Russia as the government printed excess paper currency in an attempt to fund the war.