Do you want to save dozens of hours in time? Get your evenings and weekends back? Be able to teach Leon Trotsky to your students? 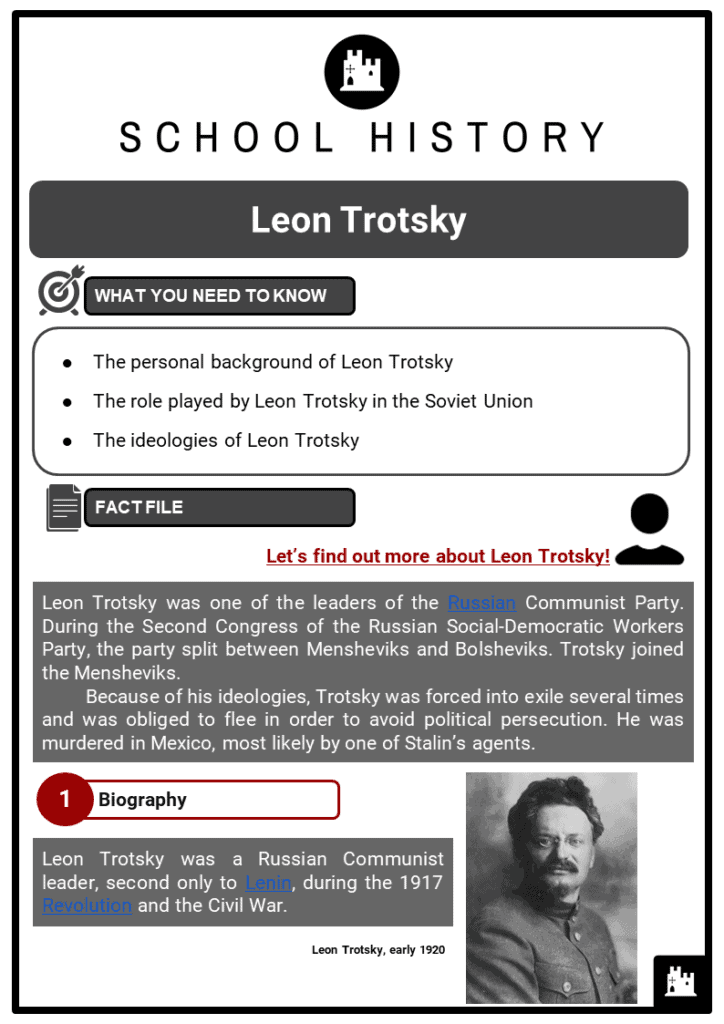 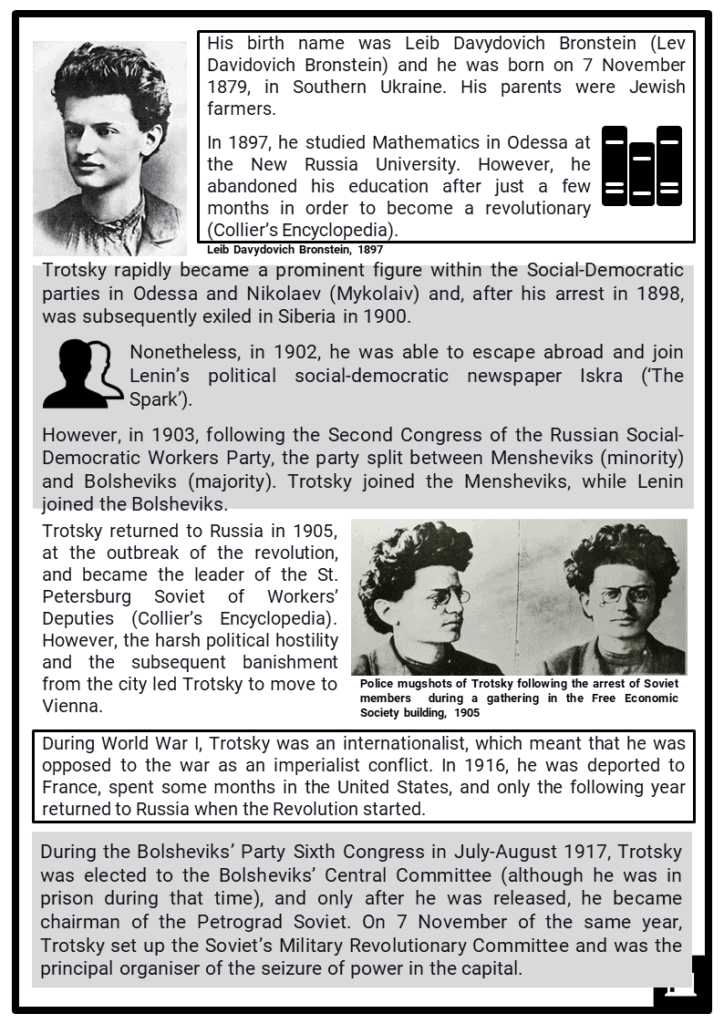 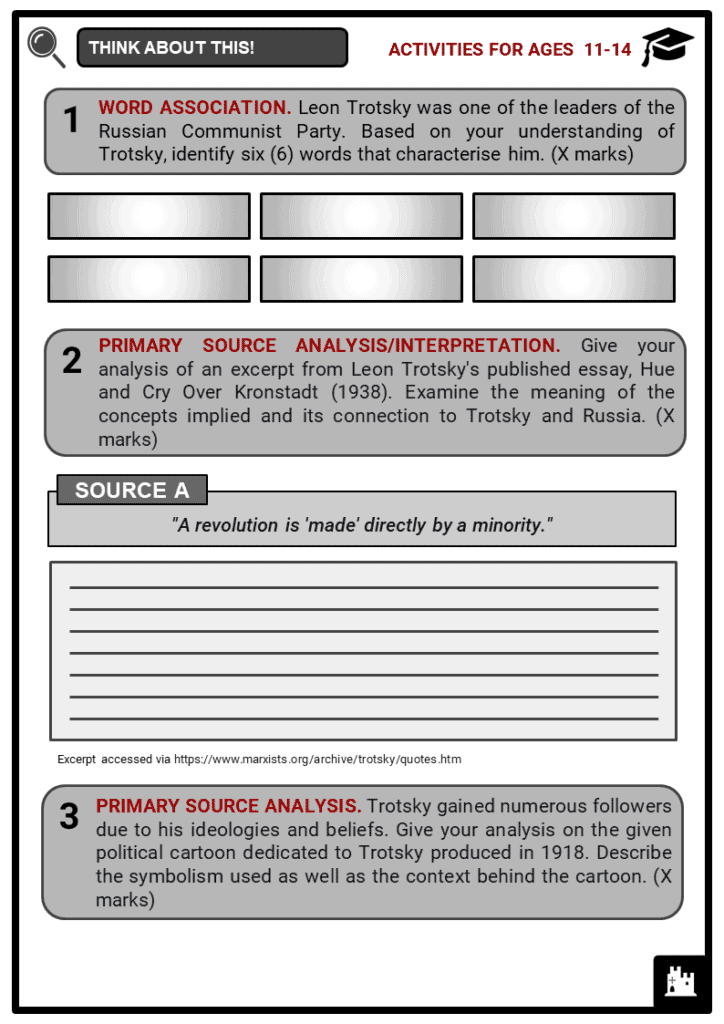 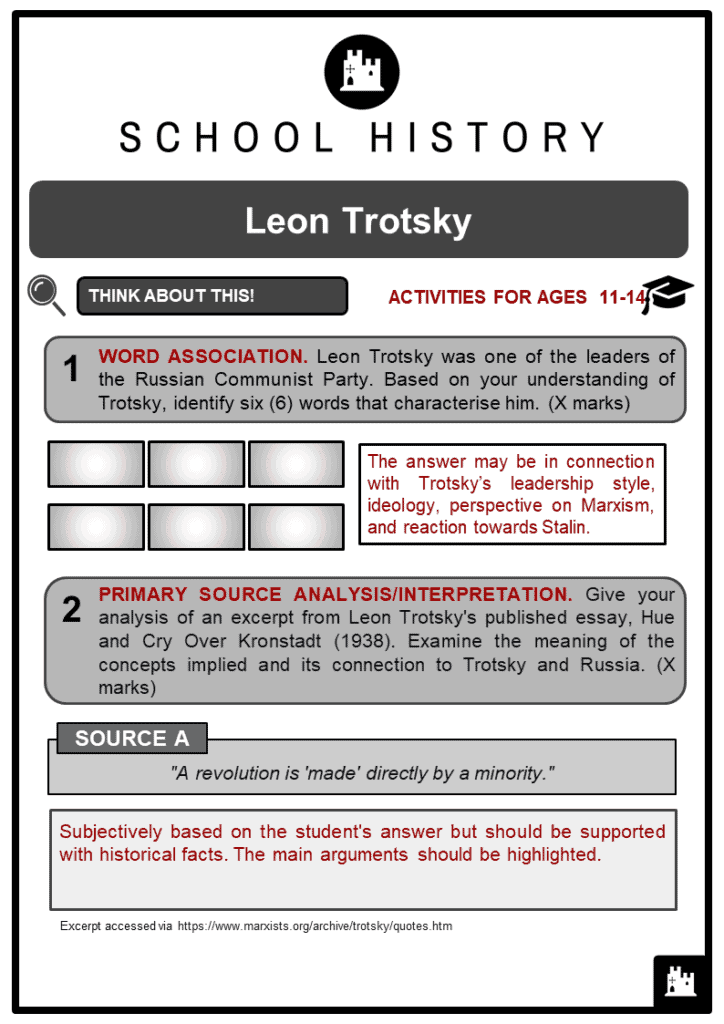 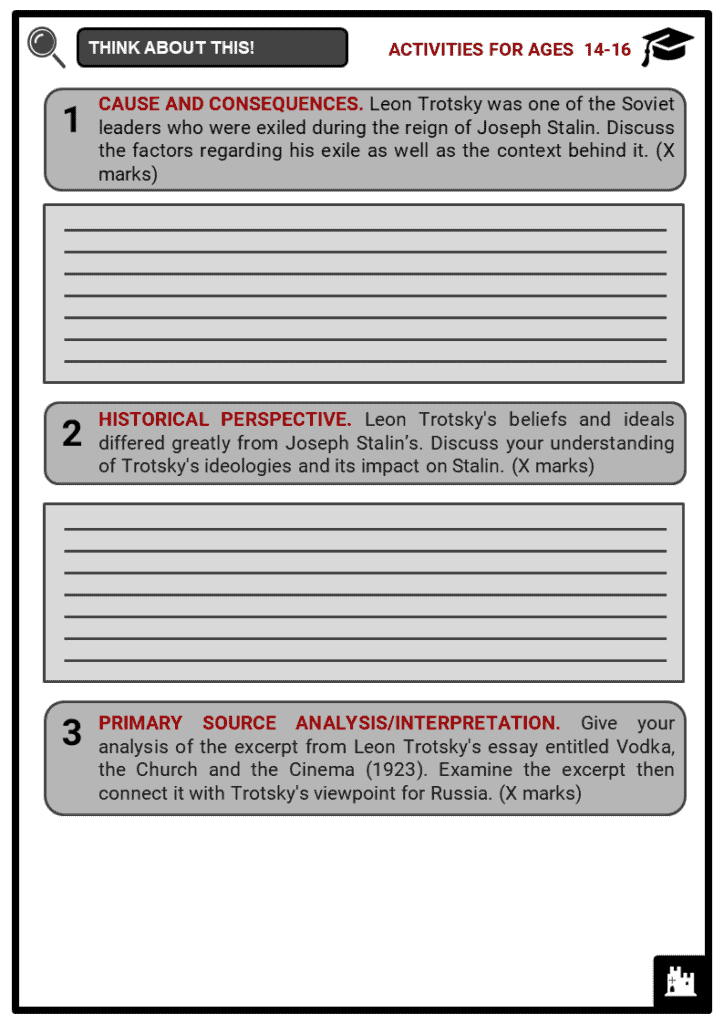 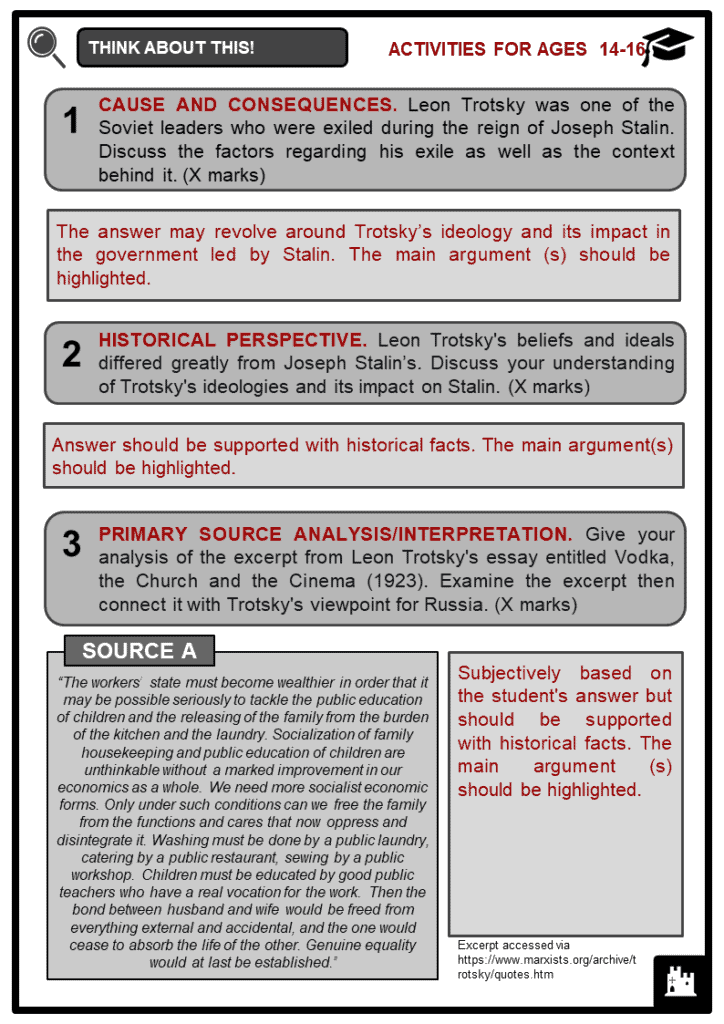 Leon Trotsky was a Russian Communist leader second only to Lenin during the 1917 Revolution and the Civil War. His birth name was Leib Davydovich Bronstein and was born on November 7, 1879, in Southern Ukraine. His parents were Jewish farmers. In 1897, he studied mathematics in Odessa at the New Russia University, however, he abandoned his education after a few months in order to be a revolutionary (Collier’s Encyclopedia). 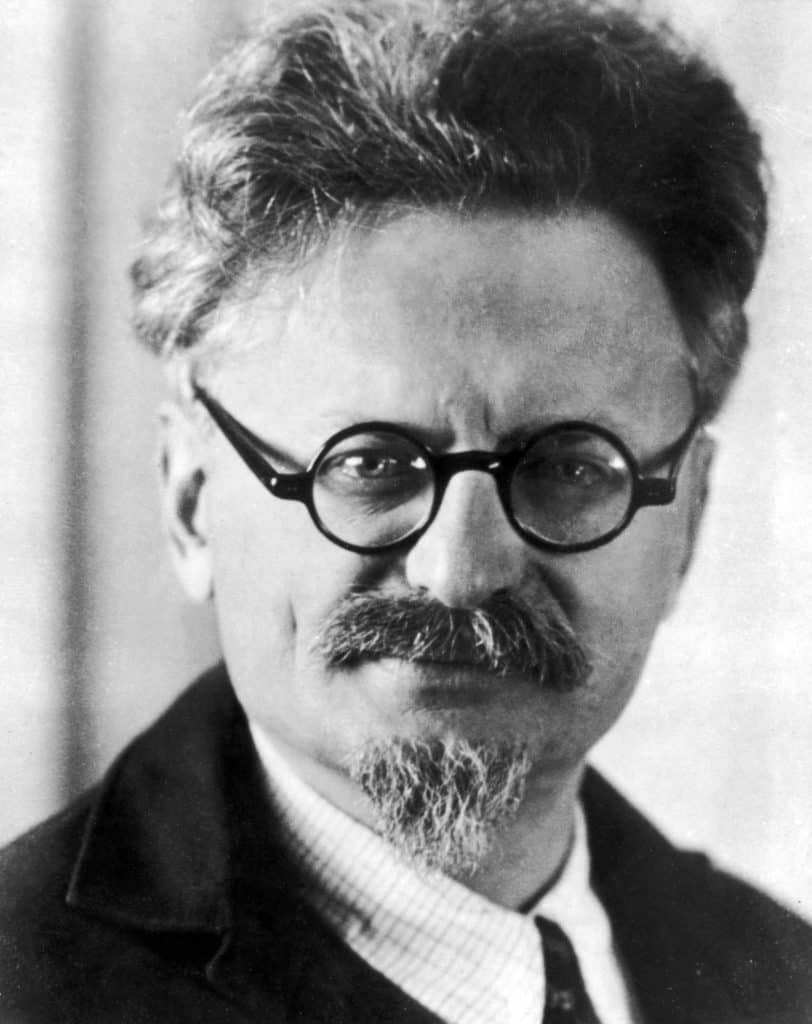 Trotsky rapidly became a prominent figure within the Social-Democratic parties in Odessa and Nikolaev and was subsequently exiled in Siberia in 1900 following his arrest in 1898.
Nonetheless, in 1902, he was able to escape abroad and join Lenin’s political social-democratic newspaper Iskra (‘The Spark’). However, in 1903, following the Second Congress of the Russian Social-Democratic Workers Party, the party split between Mensheviks and Bolsheviks. Trotsky joined the Mensheviks as opposed to Lenin.

Trotsky returned to Russia in 1905, at the outbreak of the revolution, and became the leader of the St.Petersburg Soviet of Workers’ Deputies (Collier’s Encyclopedia). However, the harsh political hostility in his regards and the subsequent banishment from the city led Trotsky to move to Vienna.

During World War I, Trotsky was an internationalist, which signified that he was opposed to the war as an imperialist conflict. On 1916, he was deported in France, spent some months in the United States, and only the following year he returned to Russia when the Revolution started. During the Bolsheviks’ Party Sixth Congress in July-August 1917, Trotsky was elected to the Bolsheviks’ Central Committee (although he was in prison during that time), and only after he was released, he became chairman of the Petrograd Soviet.

On November 7 of the same year, Trotsky set up the Soviet’s Military Revolutionary Committee and was the principal organiser of the seizure of power in the capital on November 7.

He entered the first Soviet government as commissar for foreign affairs, however, he resigned after a disagreement with Lenin over the conclusion with the Brest-Litovsk Treaty with Germany. Notwithstanding the disagreement, between 1918-1924, as commissar of the military and naval affairs, he was the leader of the Red Army during the Civil War and worked harmoniously with Lenin until he opposed him in the ‘trade-union’ discussion of 1920-21.

Trotsky seemed the most obvious candidate for the succession after Lenin’s death in 1924, and there is evidence that Lenin himself favoured this. In fact, Lenin did not want Stalin to be the leader of the Bolsheviks since, as he wrote in his own will, he thought that ‘Stalin must be removed. He is too rude and this fault, supportable in relations among us Communists, becomes insupportable in the office of the Secretary-General’ (Collier’s Encyclopedia). 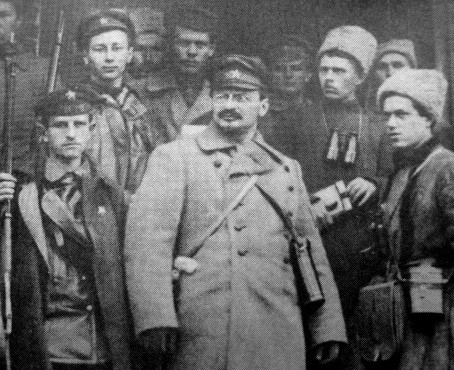 However, Trotsky did not succeed Lenin since he was blocked by a coalition of Grigori Zinoviev, Lev Kamenev, and Joseph Stalin. As a consequence, he lost his positions within the government: Trotsky had been officially defeated by Stalin at this point and had been banished to Alma-Ata (in Central Asia).

Subsequently, Trotsky was also banished from the Soviet Union, and in 1932, he was deprived of his Soviet citizenship.

Throughout his exiles in Turkey (1929-1933), France (1933-1935), and Mexico, Trotsky continued attacking Stalin and provided the theoretical leadership for Trotskyites amongst foreign Communists, who in 1934 formed the Fourth International. However, during the purges 1936-1938, Trotsky was officially accused of inspiring the subversive activities of his real or alleged adherents in Russia. Yet, an international commission of inquiry under the chairmanship of John Dewey found him not guilty. Despite elaborate precautions by both the Mexican authorities and his friends, Trotsky was mortally wounded by an assassin presumed to be a Stalinist agent, in Mexico City on August 20, 1940. The following day, Trotsky was dead.

Trotsky joined the underground socialist circles towards the end of the 1890s, i.e. when the Social Democratic movement was passing from its first stage - devoted mainly to Marxist propaganda - to the second stage of agitation aimed at fusing socialism with the labour movement. 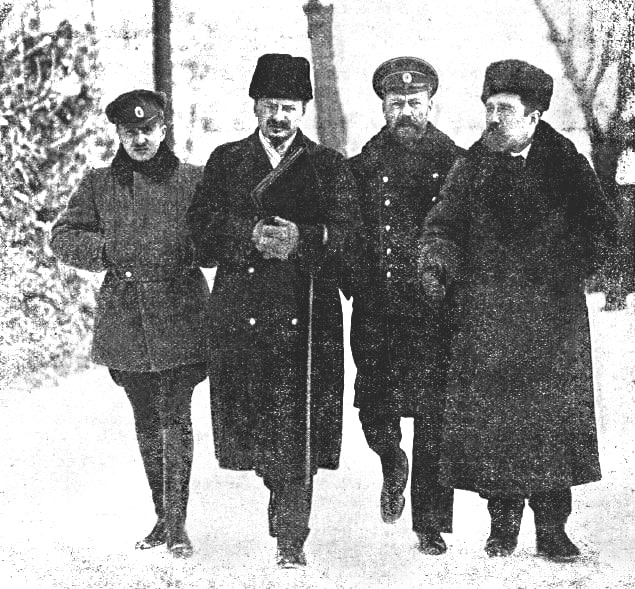 His keen interest in revolutionary theory, his organisational ability, and his powerful ambition combined to produce in Trotsky a sense of dissatisfaction within the existing state of Social Democracy and the desire for a more centralised and politically minded party.

Therefore, having understood Lenin’s ambition, Trotsky became his biggest opposer in 1903, which caused the division between Mensheviks and Bolsheviks.

However, Trotsky did not remain a Menshevik for the whole course of his political life. Between 1904-1906, he developed the idea of ‘permanent revolution’ which envisaged, instead of a prolonged period of a ‘bourgeois democratic’ regime after the overthrow of the autocracy, an uninterrupted ‘deepening’ of the revolutionary process, resulting in a socialist revolution.

By 1907, the party’s strength had significantly reduced, and by the end of the revolution, the party was split into a number of violent antagonistic sub-factions. Therefore, Trotsky’s view that all existing Social-Democratic parties should be unified, led to the formation of a separate group of like-minded people with a newspaper of their own called Pravda (which Trotsky edited himself in Vienna). In 1912, Trotsky called the August Conference which ended up in the unification of most of the Menshevik and most of the Bolshevik groups. However, it was in 1917, upon his return in Russia, that Trotsky joined the Bolsheviks since its members were his prewar and wartime supporters.

What happened after Lenin’s death?

However, since Lenin’s death in 1924, Trotsky was in a constant struggle on both personal and political planes against his rivals for succession. He consistently advocated a radically leftist course, seeing in the Soviet state a springboard for world revolution - as opposed to Stalin’s idea of building “socialism in one country”. After being defeated, Trotsky observed Stalin implement his own policy of forced industrialisation at the expense of Russia’s peasant population. During his struggle against Stalin, both in Russia and in exile, Trotsky returned to his early theme of attacking the bureaucratic party machine and the dictatorship.

Trotsky’s writings were not confined to the purely political. In military theory, he favoured the militia principle of organisation.

Moreover, he did a great deal of writing in the 1920s on the problems of cultural life which were then intensively discussed in Communist circles. He opposed the ideas that a specifically proletarian culture would emerge or should be created, to supersede bourgeois culture. In essence, Trotsky believed that the period of dictatorship of the proletariat would be far too short to permit the development of a distinct culture before the proletariat itself would lose its identity in the classless society of the future. Hence, he believed that the cultural efforts of the time were to be regarded as the germs out of which the future classless socialist culture would grow. Therefore, the party should not commit itself to support the protagonists of the proletarian culture - nor, indeed, any other artistic grouping - but should ‘help the various schools and groups of art which had come over to the revolution’ (Trotsky).