The Soldiers in World War 1 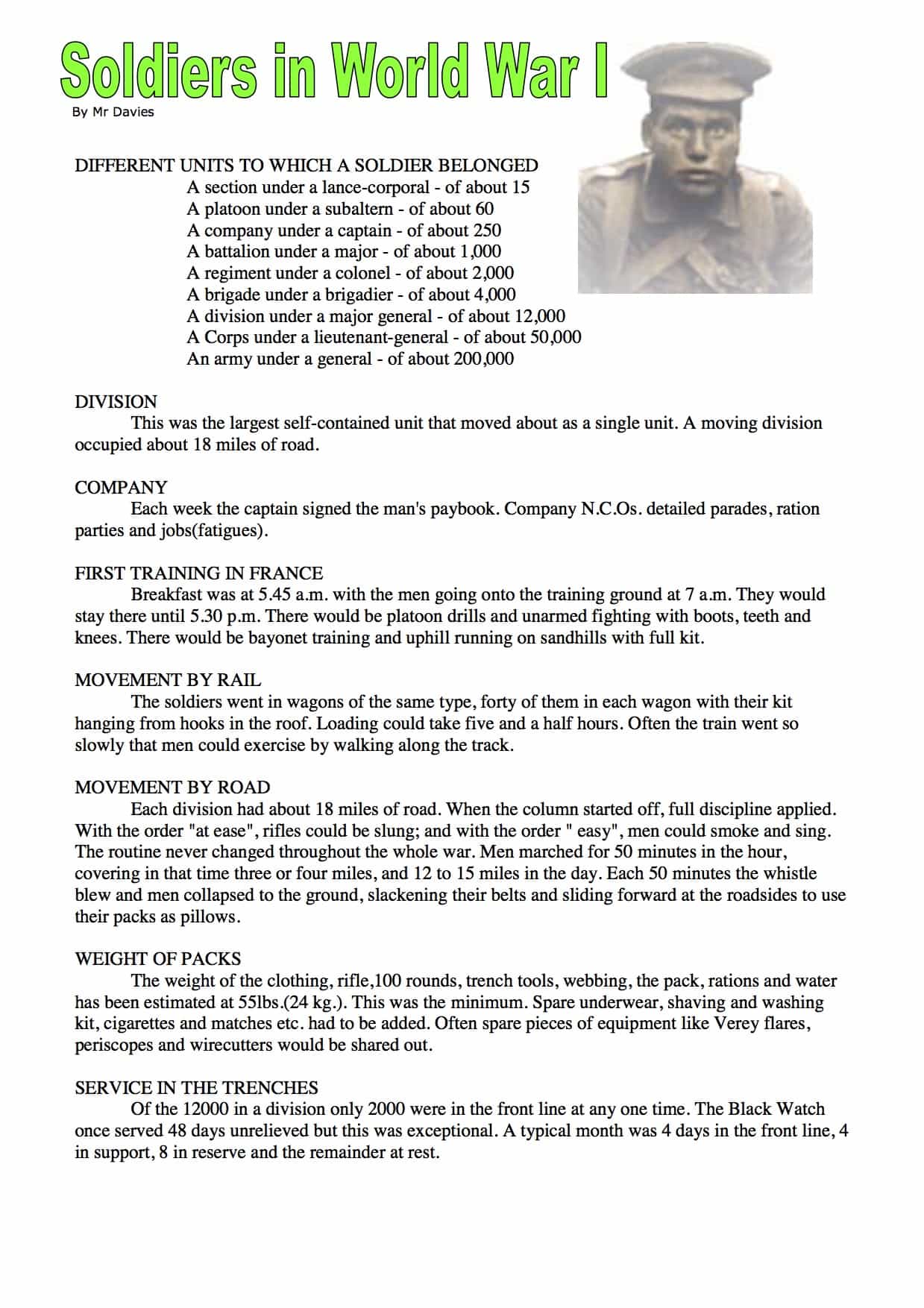 DIFFERENT UNITS TO WHICH A SOLDIER BELONGED

This was the largest self-contained unit that moved about as a single unit. A moving division
occupied about 18 miles of road.

Breakfast was at 5.45 a.m. with the men going onto the training ground at 7 a.m. They would
stay there until 5.30 p.m. There would be platoon drills and unarmed fighting with boots, teeth and knees. There would be bayonet training and uphill running on sandhills with full kit.

The soldiers went in wagons of the same type, forty of them in each wagon with their kit
hanging from hooks in the roof. Loading could take five and a half hours. Often the train went so slowly that men could exercise by walking along the track.

Each division had about 18 miles of road. When the column started off, full discipline applied.
With the order “at ease”, rifles could be slung; and with the order ” easy”, men could smoke and sing. The routine never changed throughout the whole war. Men marched for 50 minutes in the hour, covering in that time three or four miles, and 12 to 15 miles in the day. Each 50 minutes the whistle blew and men collapsed to the ground, slackening their belts and sliding forward at the roadsides to use their packs as pillows.

The weight of the clothing, rifle,100 rounds, trench tools, webbing, the pack, rations and water
has been estimated at 55lbs.(24 kg.). This was the minimum. Spare underwear, shaving and washing kit, cigarettes and matches etc. had to be added. Often spare pieces of equipment like Verey flares, periscopes and wirecutters would be shared out.

SERVICE IN THE TRENCHES

Of the 12000 in a division only 2000 were in the front line at any one time. The Black Watch
once served 48 days unrelieved but this was exceptional. A typical month was 4 days in the front line, 4 in support, 8 in reserve and the remainder at rest.

These usually worked in nests, behind the front line, while a few were in camouflaged suits in
No-man’s-land. The best way to locate a sniper was to get a rough bearing from the sound and field of fire and then triangulate by using helmet or a dummy to draw fire.

These looked like tiny translucent lobsters and fed on blood about 12 times a day. They laid five
eggs daily. One way of getting rid of them was to run a lighted candle up the seams of clothes.

This weighed just over 9 lbs and had a magazine with 10 bullets. Veterans covered the muzzle
and the bolt with cloth to keep out the mud. Rapid collective fire was more important than accuracy. The aim was to produce men who could fire 18 rounds a minute.

This was 26 lbs in weight. The magazine held 48 bullets. It required a great stock of heavy
ammunition. 6 men were required to keep it in action.

This was belt-fed and mounted on a tripod. There were 250 rounds in each belt. Usually each
gun had a certain area to sweep. Its main advantage was its accuracy. The tripod meant that an exhausted and frightened soldier could still fire it very effectively. It had the fire power of 40 riflemen and occupied a front of just two feet and so presented a small target to enemy snipers and gun batteries. It did need 16 men to keep it going and its weight meant that it could not be moved very easily.

A gun cast a shadow. A gunpit broke surrounding lines with tracks leading to it or with blast
marks which gave the earth a lighter colour than usual. Newly-dug earth, reflecting white light, glinted.

These were French eating houses. For 4 pence a soldier could receive egg and chips, rolls and coffee in warm and comfortable surroundings. They were open from 1.30 p.m. to 8.30 p.m.

Letters and parcels from home were regularly received. Nothing ever took linger than four days, even though name and regiment were the only permitted address.