The Political Structure of the Second Reich 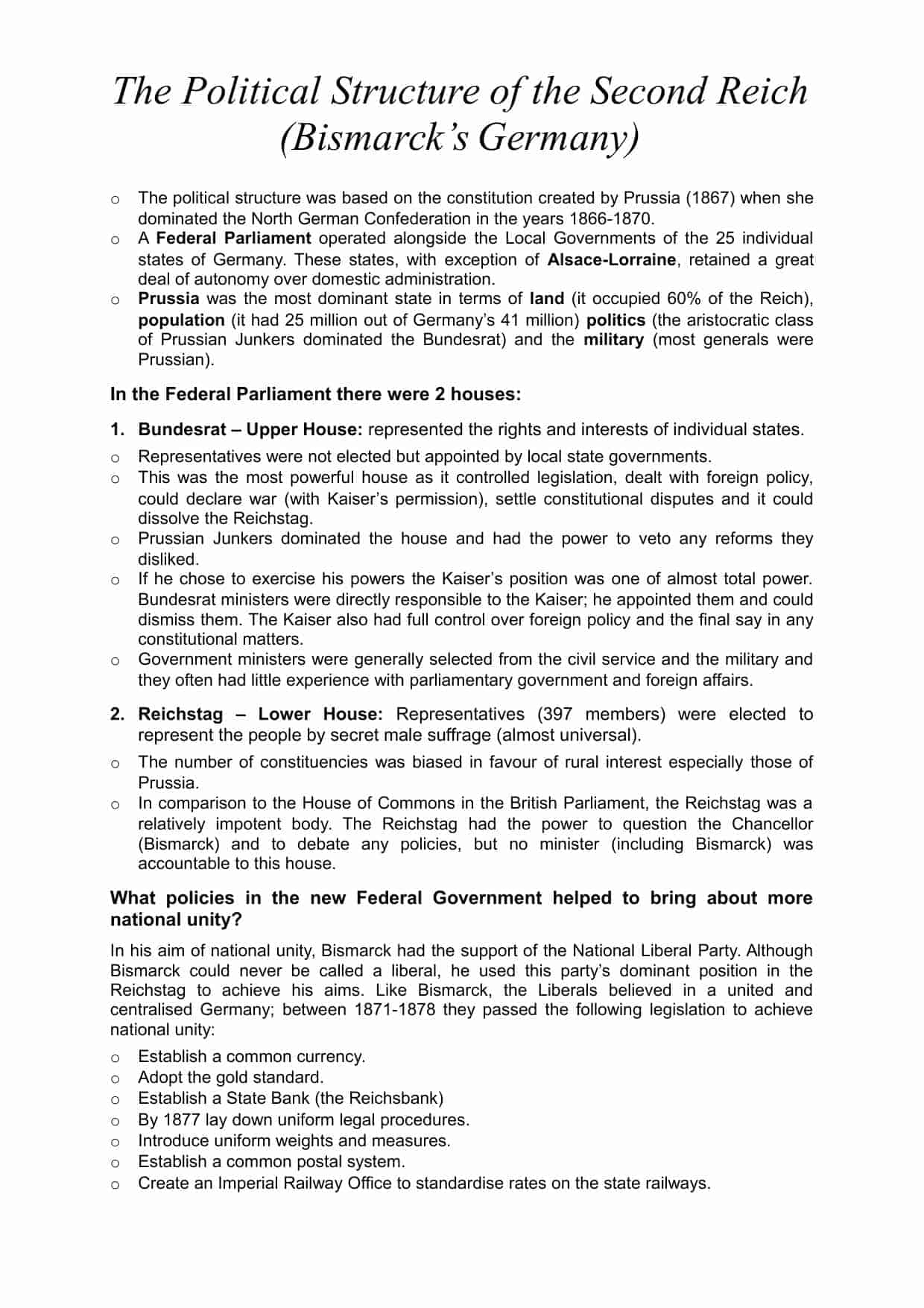 o The political structure was based on the constitution created by Prussia (1867) when she dominated the North German Confederation in the years 1866-1870.
o A Federal Parliament operated alongside the Local Governments of the 25 individual states of Germany. These states, with exception of Alsace-Lorraine, retained a great deal of autonomy over domestic administration.
o Prussia was the most dominant state in terms of land (it occupied 60% of the Reich), population (it had 25 million out of Germany’s 41 million) politics (the aristocratic class of Prussian Junkers dominated the Bundesrat) and the military (most generals were Prussian).

In the Federal Parliament there were 2 houses:

o Representatives were not elected but appointed by local state governments.
o This was the most powerful house as it controlled legislation, dealt with foreign policy, could declare war (with Kaiser’s permission), settle constitutional disputes and it could dissolve the Reichstag.
o Prussian Junkers dominated the house and had the power to veto any reforms they disliked.
o If he chose to exercise his powers the Kaiser’s position was one of almost total power. Bundesrat ministers were directly responsible to the Kaiser; he appointed them and could dismiss them. The Kaiser also had full control over foreign policy and the final say in any constitutional matters.
o Government ministers were generally selected from the civil service and the military and they often had little experience with parliamentary government and foreign affairs.

o The number of constituencies was biased in favour of rural interest especially those of Prussia.
o In comparison to the House of Commons in the British Parliament, the Reichstag was a relatively impotent body. The Reichstag had the power to question the Chancellor (Bismarck) and to debate any policies, but no minister (including Bismarck) was accountable to this house.

What policies in the new Federal Government helped to bring about more national unity?

In his aim of national unity, Bismarck had the support of the National Liberal Party. Although Bismarck could never be called a liberal, he used this party’s dominant position in the Reichstag to achieve his aims. Like Bismarck, the Liberals believed in a united and centralised Germany; between 1871-1878 they passed the following legislation to achieve national unity:

The National Liberal Party welcomed Bismarck’s push towards national unity and they supported rapid progress towards greater social and economic union. They also hoped that in the long term Germany would move towards an independent parliamentary government.