Do you want to save dozens of hours in time? Get your evenings and weekends back? Be able to teach The Second Reich to your students? 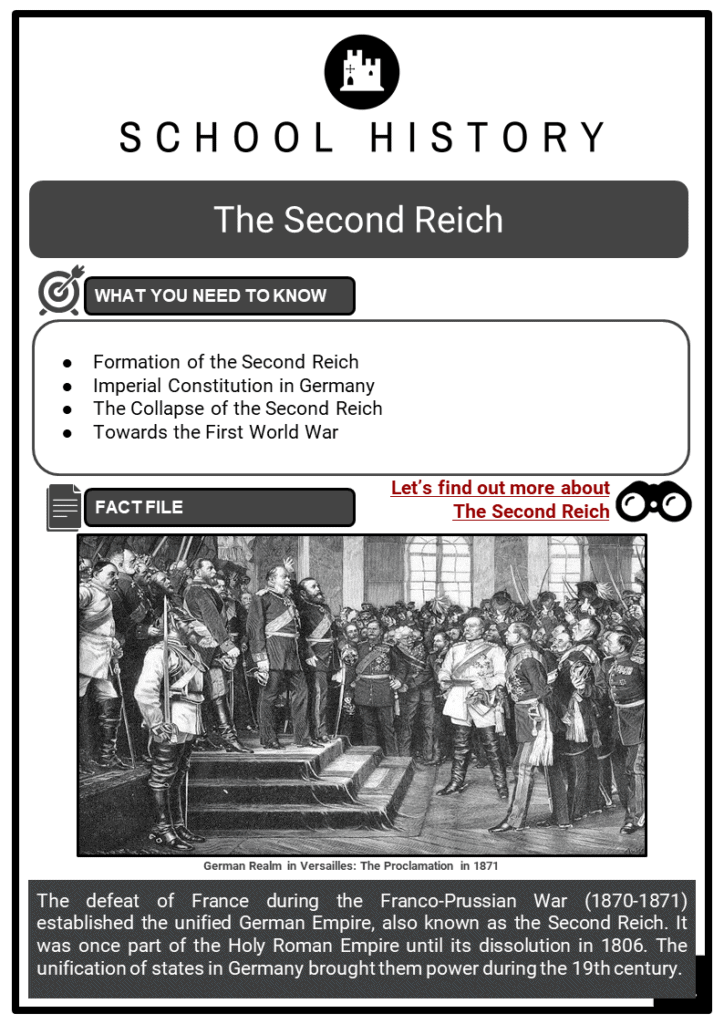 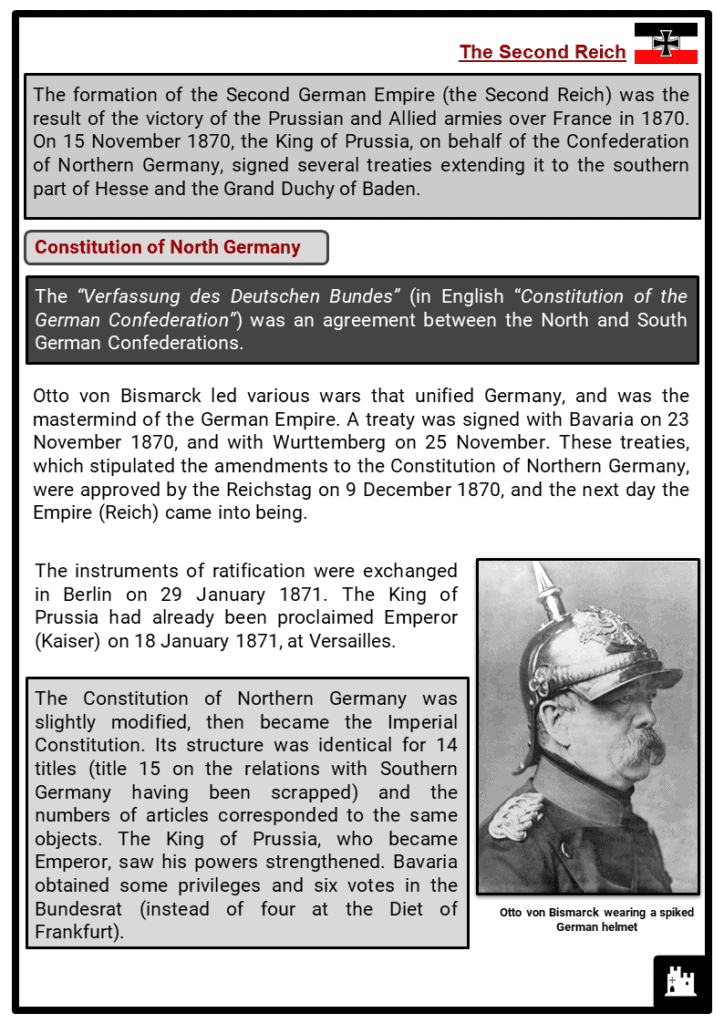 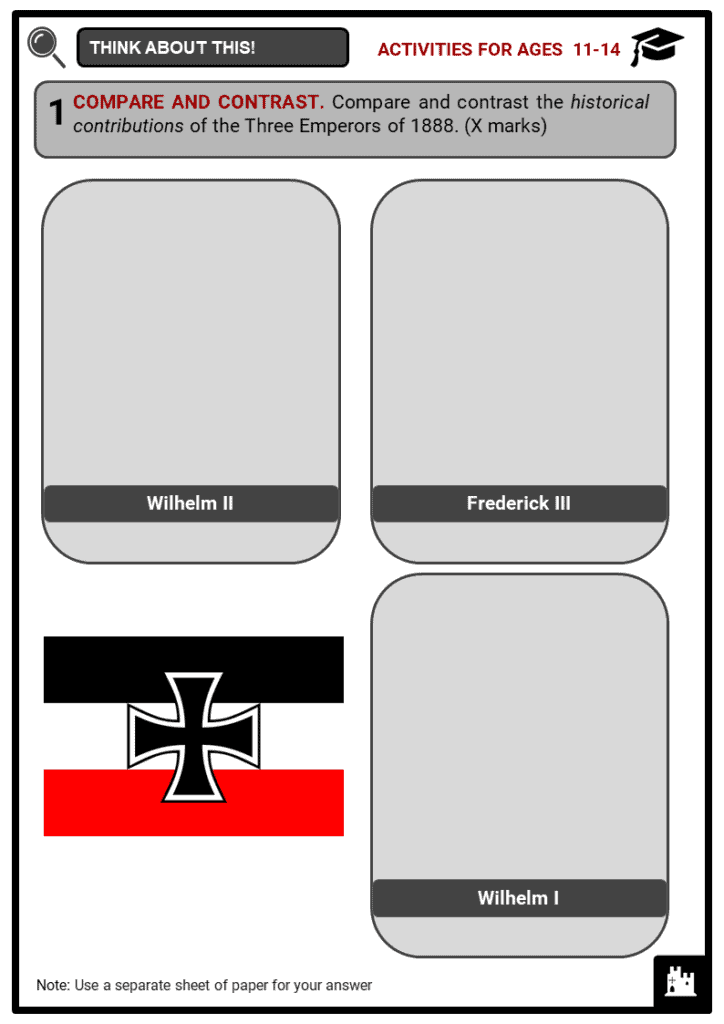 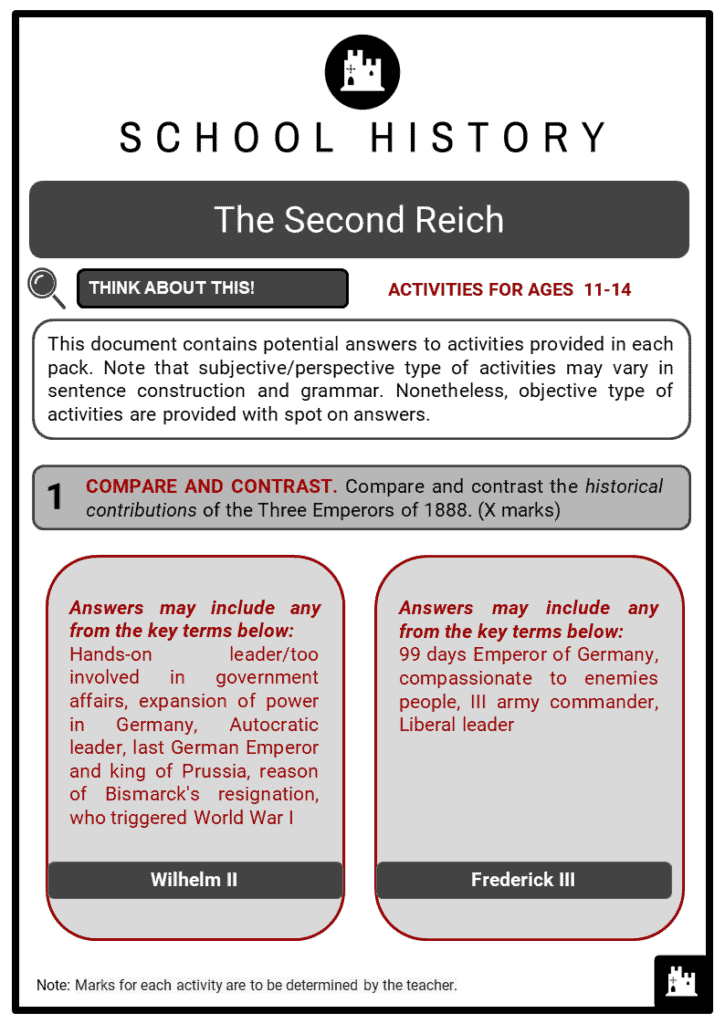 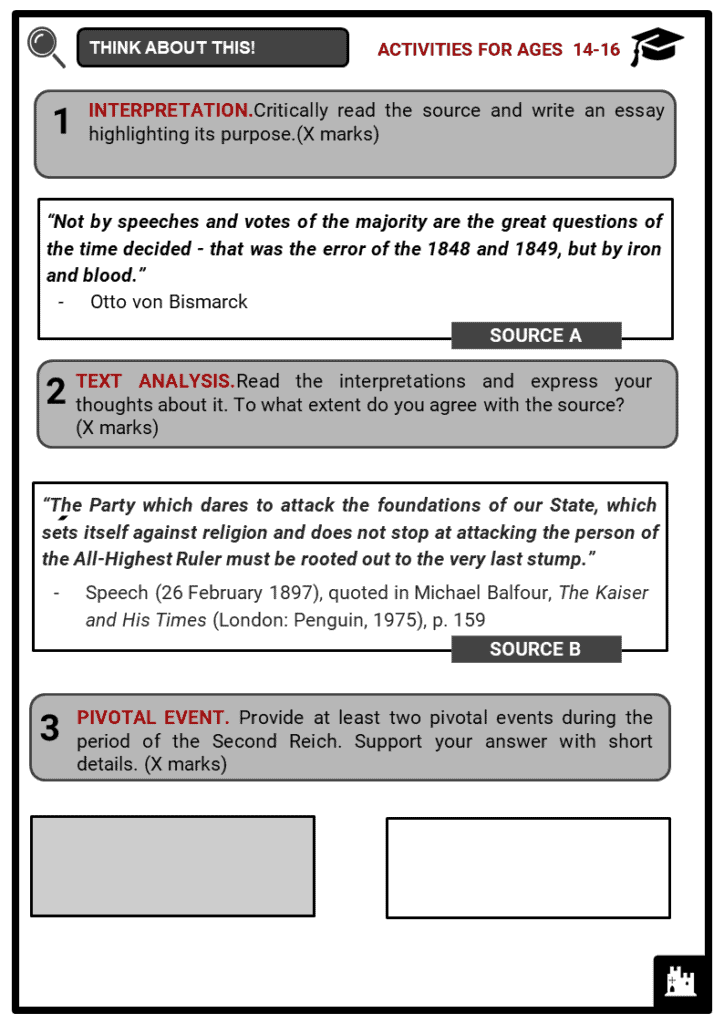 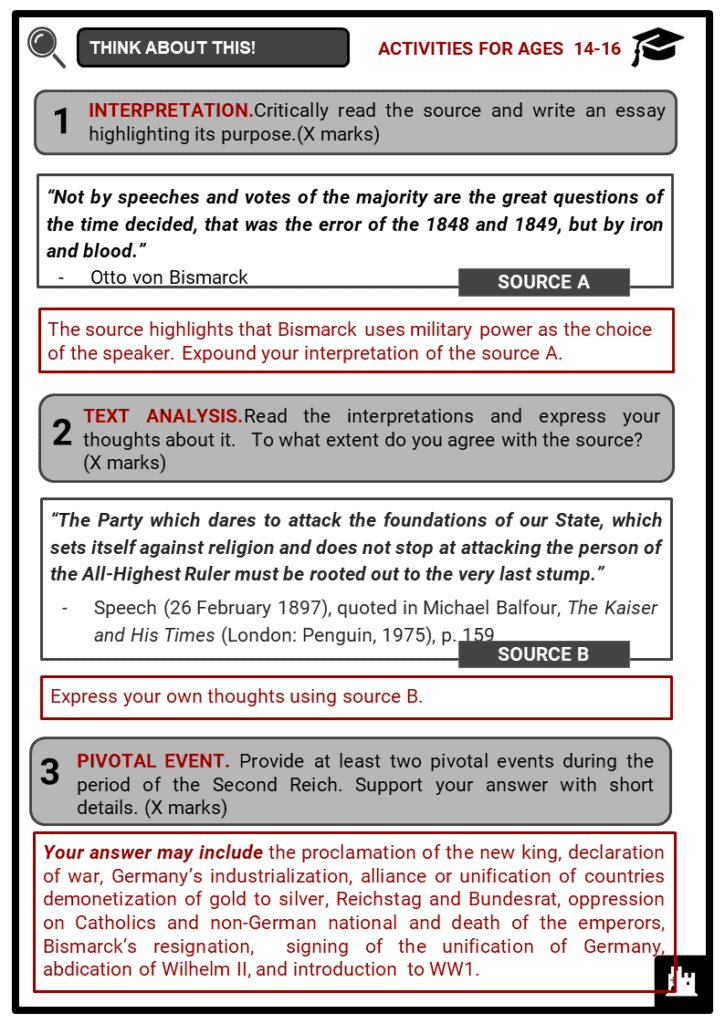 The formation of the Second German Empire (the Second Reich) was as a result of the victory of the Prussian and Allied armies over France in 1870. The King of Prussia, on behalf of the Confederation of Northern Germany, signed on November 15 1870, several treaties extending it to the southern part of Hesse and the Grand Duchy of Baden.

On November 23, a treaty was signed with Bavaria, and on November 25 with Wurtemberg. These treaties, which stipulated the amendments to the Constitution of Northern Germany, were approved by the Reichstag on December 9, and the latter accepted the next day the name of Empire (Reich). The instruments of ratification were exchanged in Berlin on 29 January 1871. The King of Prussia was already proclaimed Emperor (Kaiser) on January 18, 1871, at Versailles.

The constitution of North Germany was slightly modified, then became the imperial Constitution. Its structure was identical for 14 titles (title 15 on the relations with Southern Germany having been scrapped) and the numbers of articles corresponding to the same objects. The King of Prussia who became emperor, saw his powers strengthened. Bavaria obtained some privileges of form and six votes in the Bundesrat (instead of 4 at the Diet of Frankfurt).

This so-called Bismarck Constitution, amended 14 times, but by only eight chancellors remained in force until the revolution of 9 November 1918. It was replaced by the so-called Weimar Constitution of 14 August 1919.

By the treaty of Frankfurt of May 10 1871, France yielded Alsace (except Belfort) and part of Lorraine, which formed the land of Empire (Reichsland) administered directly by the Emperor. However, in 1874, the Emperor sent 15 deputies to the Reichstag.

The Empire, which brought together 25 Member States, covered 540,000 km2 with 41 million inhabitants.

Germany, a thousand years of history

The Reich disappeared in the glowing fire of the Götterdammerung of 1945 and came to represent the onset of twelve years of Hitler's rule and one of the most powerful institutions of the medieval West.

According to historians, the Reich represented a typically Germanic concept. Returning to the etymology of the word, we recall the antiquity of the term found in Sanskrit in the Rajan form, as well as in the old Indo-European dialects, with the sense of sovereignty or king.

Historians defined the  Reich as meaning something that "represents both a territorial framework sometimes vague but resulting from a conquest and the political power that 'exerts on him, whatever its political nature'. The historians thus considered that the Holy Roman Empire represented the archetype of the Reich, especially in the first three centuries of its existence during the period of the "Reich of Caesars", from the coronation of Otto the Great in 962 until the death of Frederick II Hohenstaufen in 1250, the last emperor who reigned over both Germany and Italy.

This first medieval Reich was based on both the Roman and Carolingian tradition, symbolised by two cities, namely Aachen where the King of Germany was crowned after being elected by the assembly of German princes, the Diet (or Reichstag ), and Rome where the pope crowned the king, conferring on him the imperial dignity.

In the Golden Age of Germany, the Reich of the Caesars, under the Ottonians then the Hohenstaufen, represented the most prestigious medieval European power. By its imperial title, the emperor was the first sovereign of the West, reigning over Germany. Germany’s eastern markets extended beyond the Elbe and the Oder under the leadership of Drag Nach Osten.

They also extended on Burgundy stretching from Switzerland to the Mediterranean and the kingdom of Italy. This corresponded to Northern Italy and Tuscany. Although it covered a large part of the Western Christian world, the Reich remained a German state. The bishops and governors appointed in Italy and Burgundy were Germans. Similarly, throughout its eight hundred years of history, the emperors were all German kings or from Germanic dynasties.

By the Ottonian Privilege established in 962, the pope, if he was granted imperial dignity by the coronation, was placed under the imperial tutelage. The pope was required to take an oath of allegiance to the emperor who in return, granted him his protection. This situation was fraught with conflicts between Rome and the Holy Roman Empire. The quarrel of Investitures, the conflicts between Guelphs and Ghibellines that were tearing northern Italy apart in the thirteenth century and the double excommunication of Frederick II caused a fierce battle between Rome and the Empire. It resulted in the complete eradication of the Hohenstaufen, marking the end of the Reich of the Caesars.

The slow agony of the First Reich

After the "great interregnum" and the election of Rodolphe de Habsburg in 1273, the Reich nursed its wounds and refocused on the Germanic cultural space, abandoning any claim to Italy. The Habsburg family gradually took the ascendancy until monopolising the imperial title from 1438.

The principle of the election of the sovereign by the seven great electors, defined by the Golden Bull of 1356, was maintained. The imperial authority, however, quickly faded. The emperor became truly sovereign only in his patrimonial states of the House of Austria.

The decline of the Reich was accentuated, also undermined by the divisions of the Protestant Reformation. What remained was only its secular and historical role as the bulwark of Europe against threats from the Levant. Under Turkish pressure, the Holy Empire defended Europe against the great wave of Islam that came up to the walls of Budapest and Vienna.

Renaissance of the word, abandonment of meaning

Historians analysed with interest what continued: The Reich disappeared in German political thought in the nineteenth century including Vörmarz ("pre-March" period extending from the Congress of Vienna in 1815 to the Spring of 1848 Peoples) in liberal and revolutionary circles. But it was Bismarck and Prussian princes Hohenzollern who revived the Reich with the creation of the Deutsches Reich in 1871. It was still called Wilhelm's Reich after the name of its two emperors.

This "ersatz de Reich", as historians describe it, preserved the local particularities and was profoundly different from the Holy Roman Empire. It was a secular state which had nothing Roman anymore since its heart was Prussian. It became a hereditary monarchy owned by the family Hohenzollern and was no longer an Empire whose head was appointed by an electoral college.

Similarly, although its Germanic character was undeniable with the return of the former Empire lands of Alsace and Lorraine in favour of the War of 1870, the Reich nevertheless remained separated from Austria and Bohemia which were part of the Austro-Hungarian Empire. Compared to the eight hundred years of the Holy Roman Empire, the Wilhelmian Reich was to have a limited existence and was to be swept away by the European war of 1914, which took over the Habsburg and Romanov monarchies.

Historians considered that Weimar was the antechamber of the Third Hitler Reich which became the GrossDeutsches Reich, "Great German Reich". Adopted on January 30, 1934, the "Reich Rebuilding Law" put an end to the federal structure of the German state and established a unitary and centralised state, eliminating the Länder from the old principalities to replace them by thirty-three Gau corresponding to the administrative organisation of the NSDAP.

This new state had nothing in common with the German tradition, being built without or even against the old elites of the past. Historians point out that most of the Hitlerite leaders were not Prussians and that the old princely families, sometimes hostile to the new regime, were persecuted or exiled.

If the Reich, with the incorporation of Austria and Bohemia-Moravia, partly found the borders of the Holy Roman Empire, the idea of a community of the people (Volksgemeinschaft) denied the regional particularities of the former Reich. The Third Reich, which was supposed to establish German supremacy over the world and last a thousand years, collapsed after twelve years, not without facing Cyclopean events. Germany, devastated by the war, was defeated and occupied and the Reich collapsed.