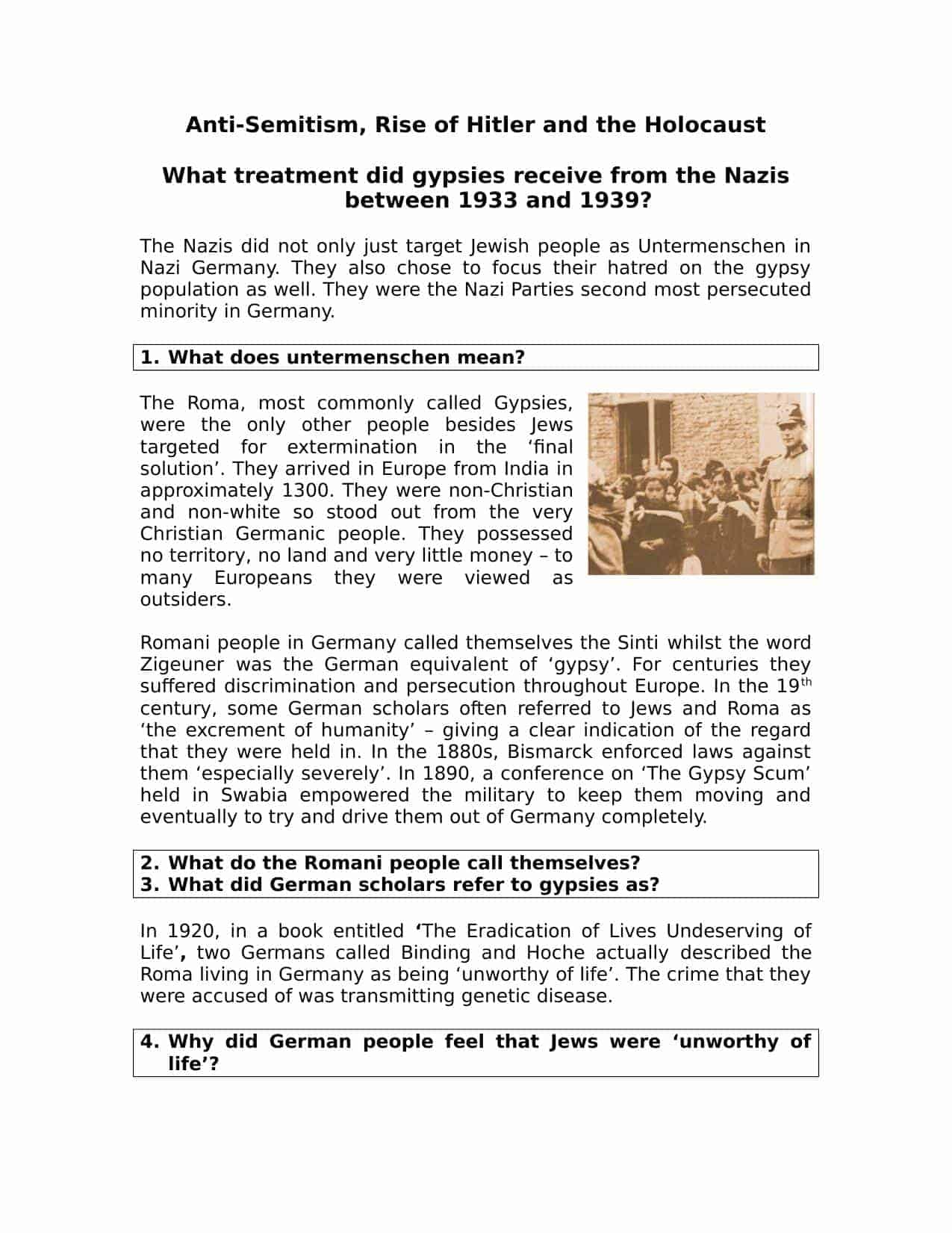 The Nazis did not only just target Jewish people as Untermenschen in Nazi Germany. They also chose to focus their hatred on the gypsy population as well. They were the Nazi Parties second most persecuted minority in Germany.

The Roma, most commonly called Gypsies, were the only other people besides Jews targeted for extermination in the ‘final solution’. They arrived in Europe from India in approximately 1300. They were non-Christian and non-white so stood out from the very Christian Germanic people. They possessed no territory, no land and very little money – to many Europeans they were viewed as outsiders.

Romani people in Germany called themselves the Sinti whilst the word Zigeuner was the German equivalent of ‘gypsy’. For centuries they suffered discrimination and persecution throughout Europe. In the 19th century, some German scholars often referred to Jews and Roma as ‘the excrement of humanity’ – giving a clear indication of the regard that they were held in. In the 1880s, Bismarck enforced laws against them ‘especially severely’. In 1890, a conference on ‘The Gypsy Scum’ held in Swabia empowered the military to keep them moving and eventually to try and drive them out of Germany completely.

In 1920, in a book entitled ‘The Eradication of Lives Undeserving of Life’, two Germans called Binding and Hoche actually described the Roma living in Germany as being ‘unworthy of life’. The crime that they were accused of was transmitting genetic disease.

During the 1920s, the oppression of Roma in Germany had increased immensely. In 1920 they were actually forbidden to enter parks and public baths. In 1925 a conference was actually held on ‘The Gypsy Question’ which then resulted in new laws actually requiring unemployed Roma gypsies to be sent to work camps ‘for reasons of public security’ and for all Roma to now be registered with the police.
After 1927, all Roma, even young children, were forced to carry identification cards bearing their fingerprints and photographs. In 1929, The Central Office for the Fight Against the Gypsies in Germany was set up in Munich. In 1933, ten days before the Nazis came to power, government officials in Burgeland called for the withdrawal of all civil rights from the Roma people. This does show, that like Anti-Semitism, there was a significant amount of hatred towards the Roma even before the Nazi Party took to power.

What is most significant about the majority of this discrimination is that it took place during the Weimar years. This was the time when Germany was considered its most liberal with Jews treated as equal citizens. If this was the treatment received from the ‘liberal’ Weimar governments, what could Roma expect from the Nazis?

• In September 1935, the Roma gypsies also became subject to the restrictions of the Nuremburg Laws for the Protection of German Blood and Honour. This forbade intermarriage between Germans and ‘non-Aryans’, specifically Jews, Roma and people of African descent. In 1937, the National Citizenship Law actuallu relegated Roma and Jews to the status of second-class citizens, depriving them of their civil rights.
• Also in 1937, Heinrich Himmler issued a decree entitled ‘The Struggle Against the Gypsy Plague’. This re-enforced the idea in German people’s minds that the Roma gypsies who were of mixed blood were now the most likely to engage in criminal activity. It also required that all information on the Roma should be sent from the regional police departments to the Reich Central Office. This meant that they had to be registered and their racial origins confirmed. This was very similar to the Jews.
• Between 12th and 18th June 1938, a Gypsy Clean-Up Week took place throughout Germany on the orders of the Nazi Government. Very similar to Kristallnacht for the Jews, it marked the beginning of the end for Roma population in Germany. Also in 1938, the first reference to ‘The Final Solution of the Gypsy Question’ appeared, in a document signed by Himmler on 8th December. This was almost 3 years before a similar document was produced for the Jewish population.
• In January 1940, the first mass genocide of the Holocaust took place when 250 Roma children were murdered in Buchenwald. They were being used as guinea pigs to test the efficiency of the Zyklon-B crystals later used in the gas chambers.