Do you want to save dozens of hours in time? Get your evenings and weekends back? Be able to teach The Federalist Papers to your students? 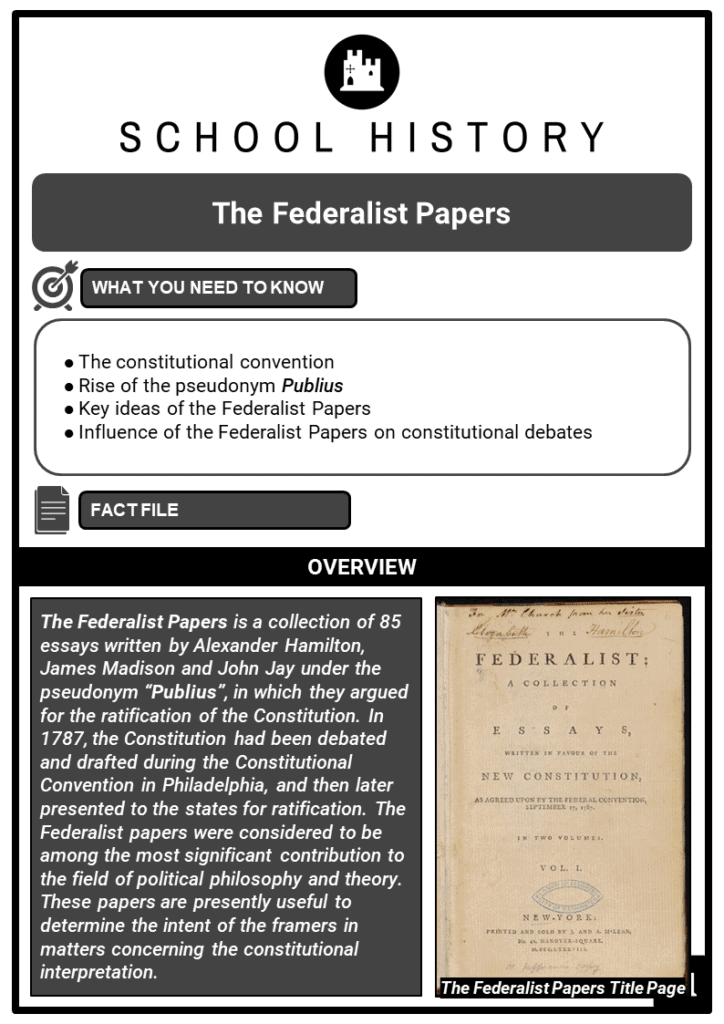 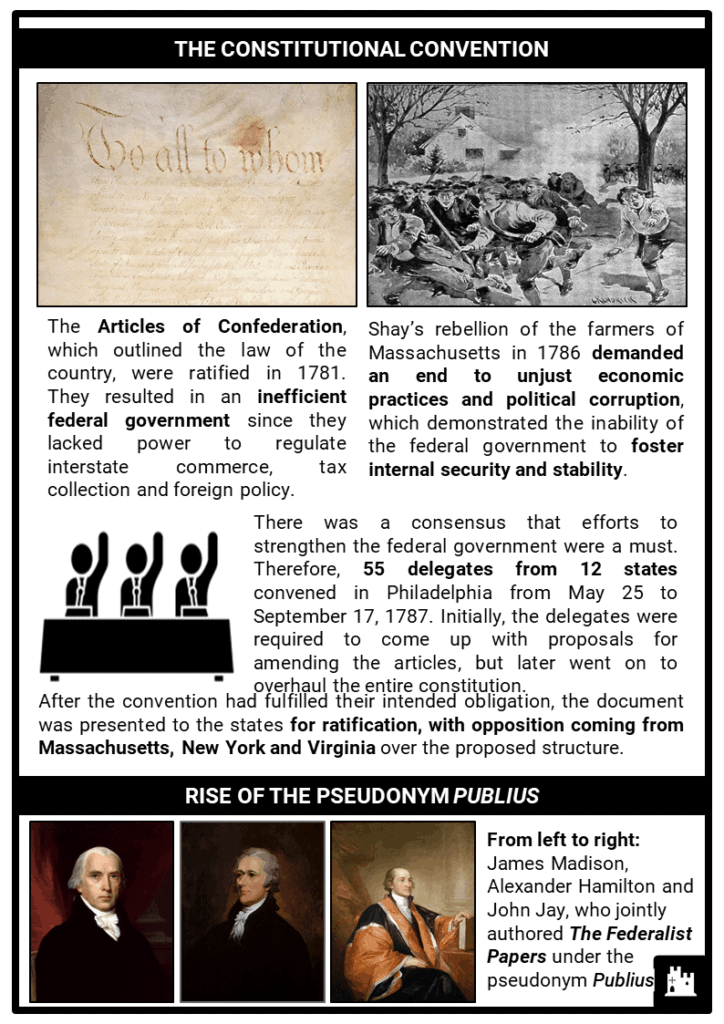 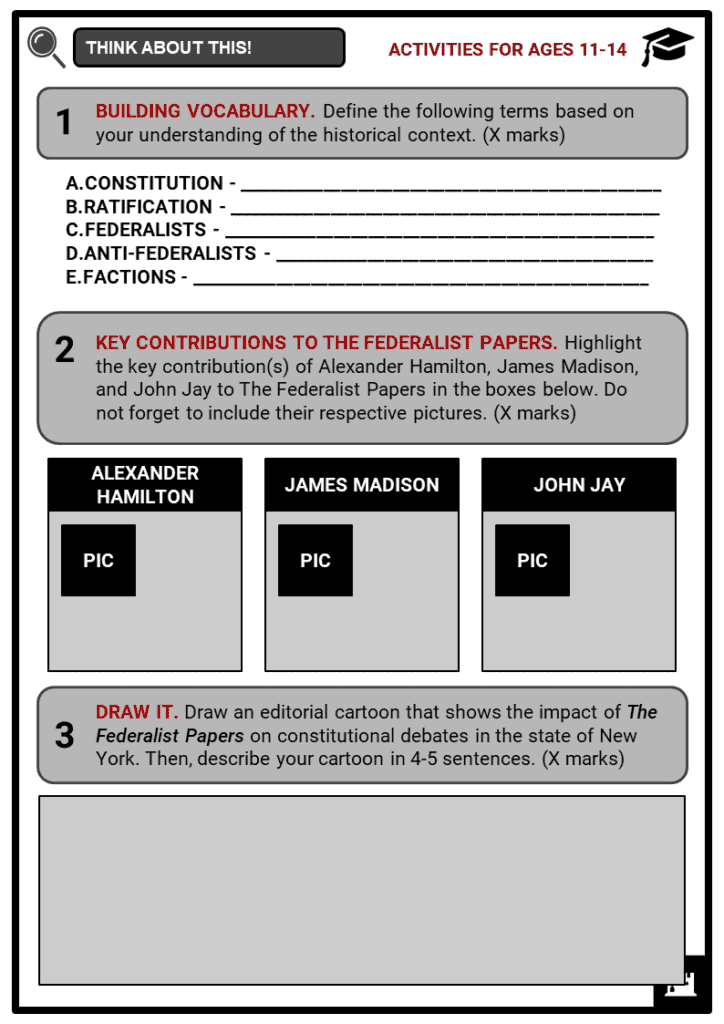 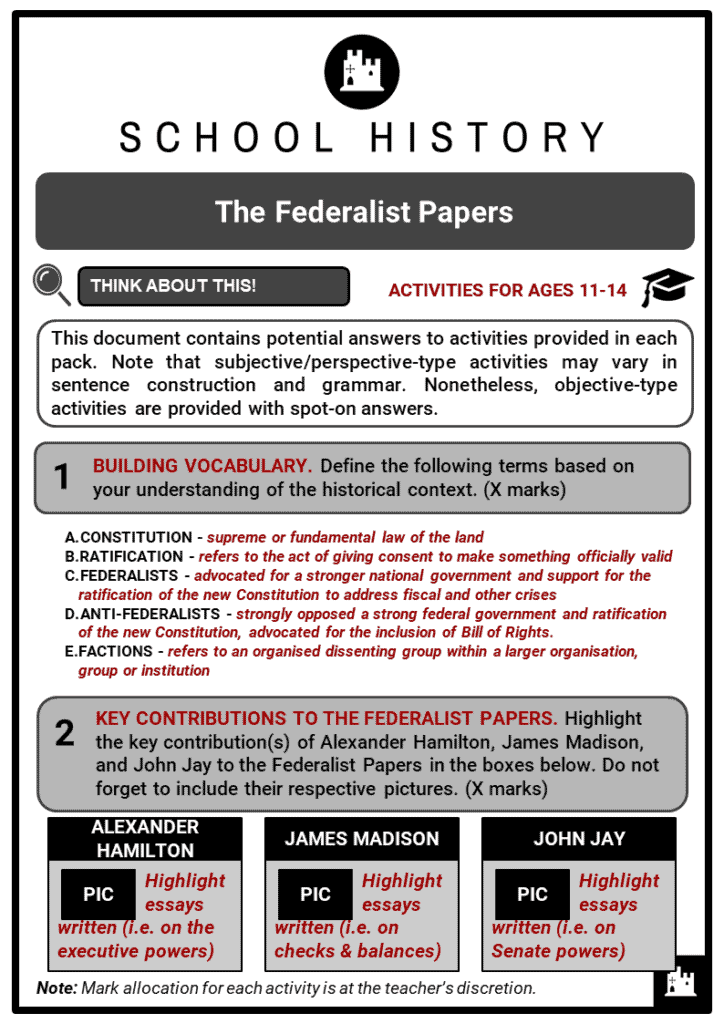 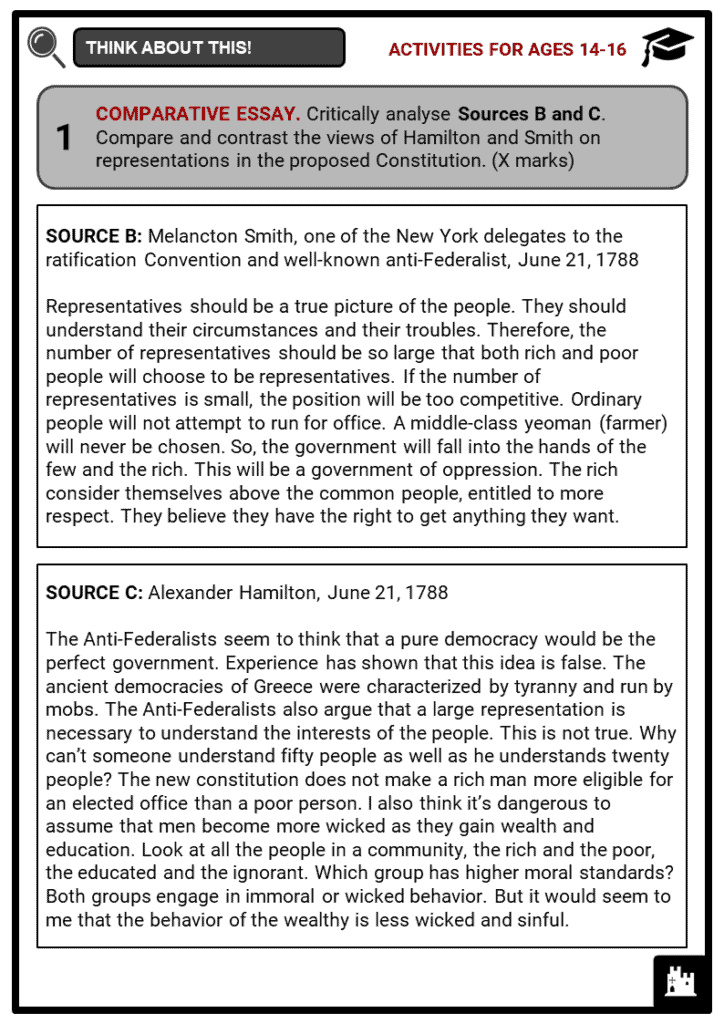 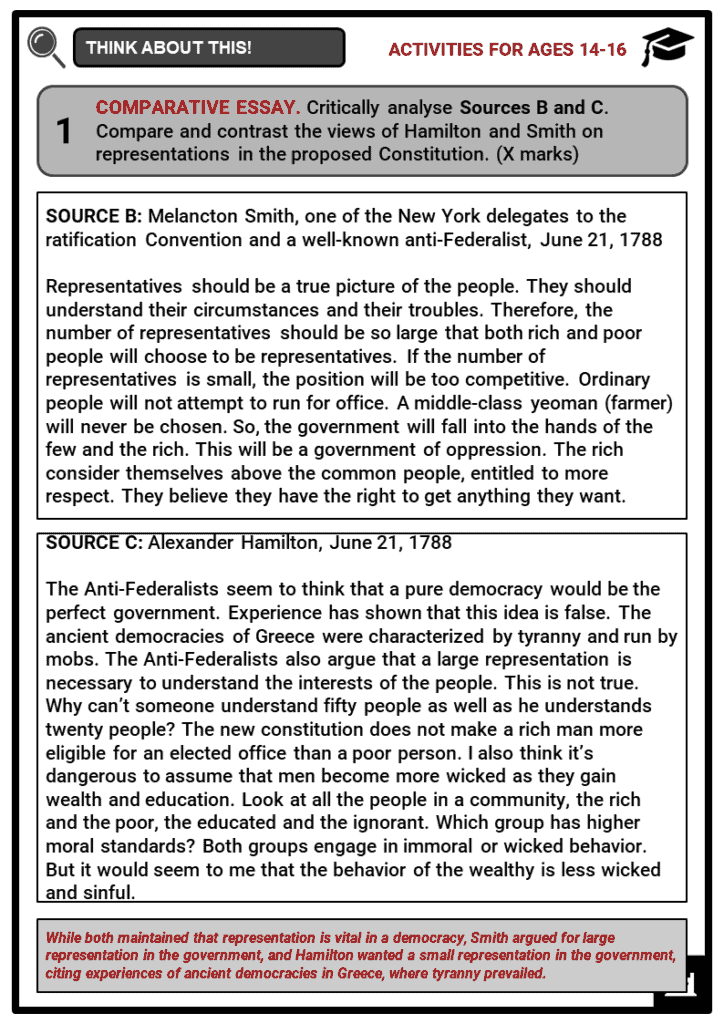 The articles of Confederation resulted in an inefficient federal government which lacked the power to regulate interstate commerce, collect taxes and direct the U.S foreign policy. Further, the Shays' rebellion, of the farmers of Massachusetts demanding an end of what they perceived as unjust economic policies and political corruption, demonstrated the inability of the federal government to foster internal security and stability.

There was a consensus that efforts to strengthen the federal government were required. Therefore, 55 delegates from twelve states convened at Philadelphia from 25 May to 17 September 1787. Initially, the delegates were required to come up with proposals for the amending the articles but later went on to overhaul the old constitutional framework.

After the convention had fulfilled their intended obligation, the document was presented to states for ratification with opposition coming from mostly Massachusetts, New York and Virginia over the proposed structure.

They were initially intended to be a series of papers for publication in the New York city newspaper but expanded into a collection of 85 essays published as to volumes in March and May 1788. In the 20th Century, they came to be known as federalists' paper. The primary objective of the essays was to convince the American people of the sufficiency of the Constitution in addressing historical concerns of a strong central government vis the powers of the states.

The essays were written by John Jay, Alexander Hamilton, and James Madison under the pseudonym Publius. In ancient Rome, Publius was one of the four aristocrats who led the overthrow of the Roman monarchy to establish the Roman Republic. The choice of name demonstrates how the federalists perceived themselves and addressed the concerns of the proposed constitution embodying the weakness of the monarchial structure of England. 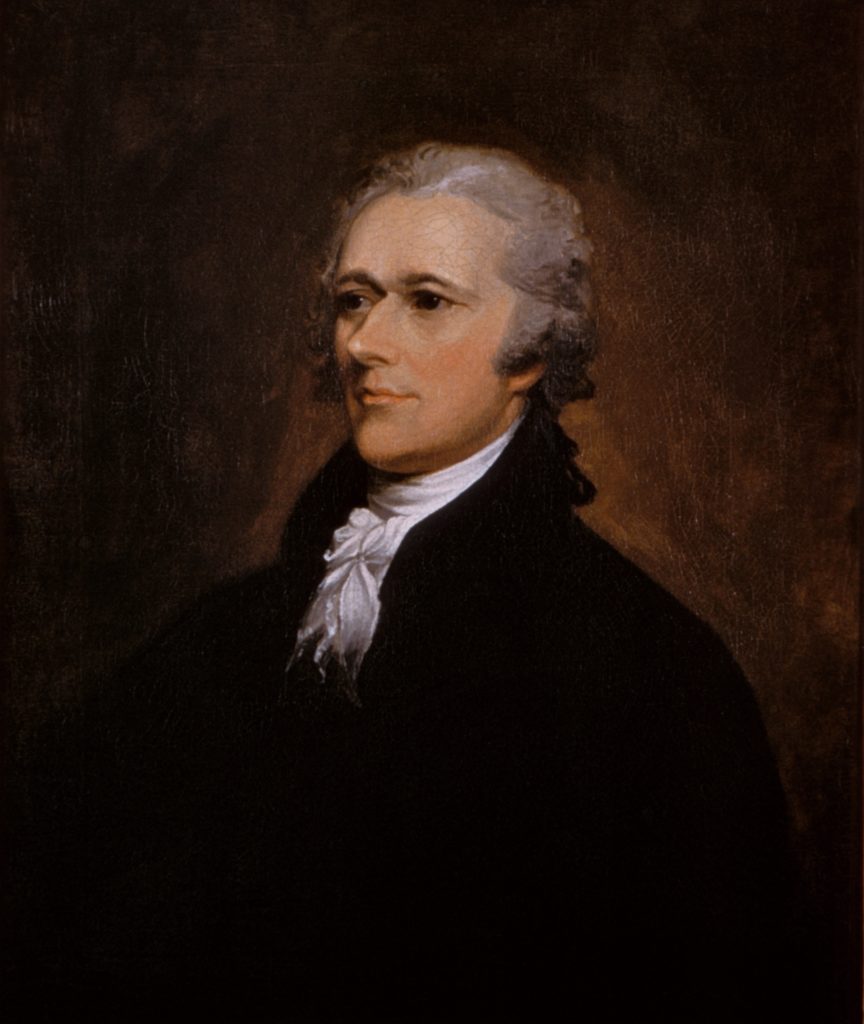 The most prominent federalists’ papers were those authored by Hamilton or Madison. The authors sought to generate support for the constitution. In the first of the papers, they sought to answer the question “whether societies of men are really capable or not of establishing good government from reflection and choice, or whether they are forever destined to depend for their political constitutions on accident and force.” This was a response to the issues raised in the Brutus 1, the first of the antifederalist’s papers.

Again, the federalist's papers were curated around some of the ideas of democracy as were the Antifederalist papers. The views were participatory, pluralistic and elite centred democracies.

In federalists paper No. 10, Madison considers how to avoid the tyranny of the majority and advocates for the expansion of the United States into a large, commercial republic. He also argues that a well-structured Union would be able to respond and control the violence of a faction, of course, having in mind the Shays' rebellion.

“Among the numerous advantages promised by a well-constructed Union, none deserves to be more accurately developed than its tendency to break and control the violence of faction. […] Complaints are everywhere heard from our most considerate and virtuous citizens, equally the friends of public and private faith, and of public and personal liberty, that our governments are too unstable, that the public good is disregarded in the conflicts of rival parties, and that measures are too often decided, not according to the rules of justice and the rights of the minor party, but by the superior force of an interested and overbearing majority.”

Madison goes further to argue that a pure democracy, in which the people exercises their power directly, rather than through representatives cannot cure the mischief of factions. He explains that eventually, a majority will take over and trample the rights of the minority. He states:

“From this view of the subject, it may be concluded that a pure democracy, by which I mean a society consisting of a small number of citizens, who assemble and administer the government in person, can admit of no cure for the mischiefs of faction. A common passion or interest will, in almost every case, be felt by a majority of the whole; a communication and concert result from the form of government itself, and there is nothing to check the inducements to sacrifice the weaker party or an obnoxious individual.”

He then goes further to define what he means by the term republic and contrasts it to pure democracy as:

“A republic, by which I mean a government in which the scheme of representation takes place, opens a different prospect, and promises the cure for which we are seeking. Let us examine the points in which it varies from pure democracy, and we shall comprehend both the nature of the cure and the efficacy which it must derive from the Union. The two great points of difference between a democracy and a republic are: first, the delegation of the government, in the latter, to a small number of citizens elected by the rest; secondly, the greater number of citizens, and greater sphere of country, over which the latter may be extended.”

According to Madison, a republic which allows the election of a smaller number of citizens to represent the rest of the people is a progressive form of government. He further notes that such a republic is suitable for the United States, primarily because of its size in terms of the vastness of land and population. He continues to argue that democracy enables people to channel their views through their representatives. Such representatives according to Madison are able to better communicate the opinions of the people.

“The effect of the first difference is, on the one hand, to refine and enlarge the public views, by passing them through the medium of a chosen body of citizens, whose wisdom may best discern the true interest of their country, and whose patriotism and love of justice will be least likely to sacrifice it to temporary or partial considerations.”

He continues, giving credence to the arguments of Brutus I by noting:

“On the other hand, the effect may be inverted. Men of factious tempers, of local prejudices, or of sinister designs, may, by intrigue, by corruption, or by other means, first, obtain the suffrages, and then betray the interests, of the people.”

He then gets into the issue of proportionality in so far as the number of representatives is concerned and states:

He goes further to demonstrate, that a republican democracy will minimise the chances of having questionable leaders. This is because for the leader to be successfully elected, he/she must appeal to the majority of the citizens.

“In the next place, as each representative will be chosen by a greater number of citizens in the large than in the small republic, it will be more difficult for unworthy candidates to practice with success the vicious arts by which elections are too often carried; and the suffrages of the people being more free, will be more likely to centre in men who possess the most attractive merit and the most diffusive and established characters.”

He continues on to provide an illustration of how the proposed constitution addresses even the apparent weakness in a republican form of government. He demonstrates the federal structure of the constitution and the opportunities for citizen engagement at either the national or local level by stating:

“It must be confessed that in this, as in most other cases, there is a mean, on both sides of which inconveniences will be found to lie. By enlarging too much the number of electors, you render the representatives too little acquainted with all their local circumstances and lesser interests; as by reducing it too much, you render him unduly attached to these, and too little fit to comprehend and pursue great and national objects. The federal Constitution forms a happy combination in this respect; the great and aggregate interests being referred to the national, the local and particular to the State legislatures.”

“The other point of difference is, the greater number of citizens and extent of territory which may be brought within the compass of republican than of democratic government; and it is this circumstance principally which renders factious combinations less to be dreaded in the former than in the latter. The smaller the society, the fewer probably will be the distinct parties and interests composing it; the fewer the distinct parties and interests, the more frequently will a majority be found of the same party; and the smaller the number of individuals composing a majority, and the smaller the compass within which they are placed, the more easily will they concert and execute their plans of oppression. Extend the sphere, and you take in a greater variety of parties and interests; you make it less probable that a majority of the whole will have a common motive to invade the rights of other citizens; or if such a common motive exists, it will be more difficult for all who feel it to discover their own strength, and to act in unison with each other. Besides other impediments, it may be remarked that, where there is a consciousness of unjust or dishonourable purposes, communication is always checked by distrust in proportion to the number whose concurrence is necessary.”

“Hence, it clearly appears, that the same advantage which a republic has over a democracy, in controlling the effects of faction, is enjoyed by a large over a small republic, --is enjoyed by the Union over the States composing it.”

“In the extent and proper structure of the Union, therefore, we behold a republican remedy for the diseases most incident to republican government. And according to the degree of pleasure and pride we feel in being republicans, ought to be our zeal in cherishing the spirit and supporting the character of Federalists.”

In Federalists paper No. 39 and 51, Madison seeks to “lay a due foundation for that separate and distinct exercise of the different powers of government, which to a certain extent is admitted on all hands to be essential to the preservation of liberty.” He makes a case for the importance of checks and balances through the separation of powers of the three arms of government – judiciary, executive and legislature. 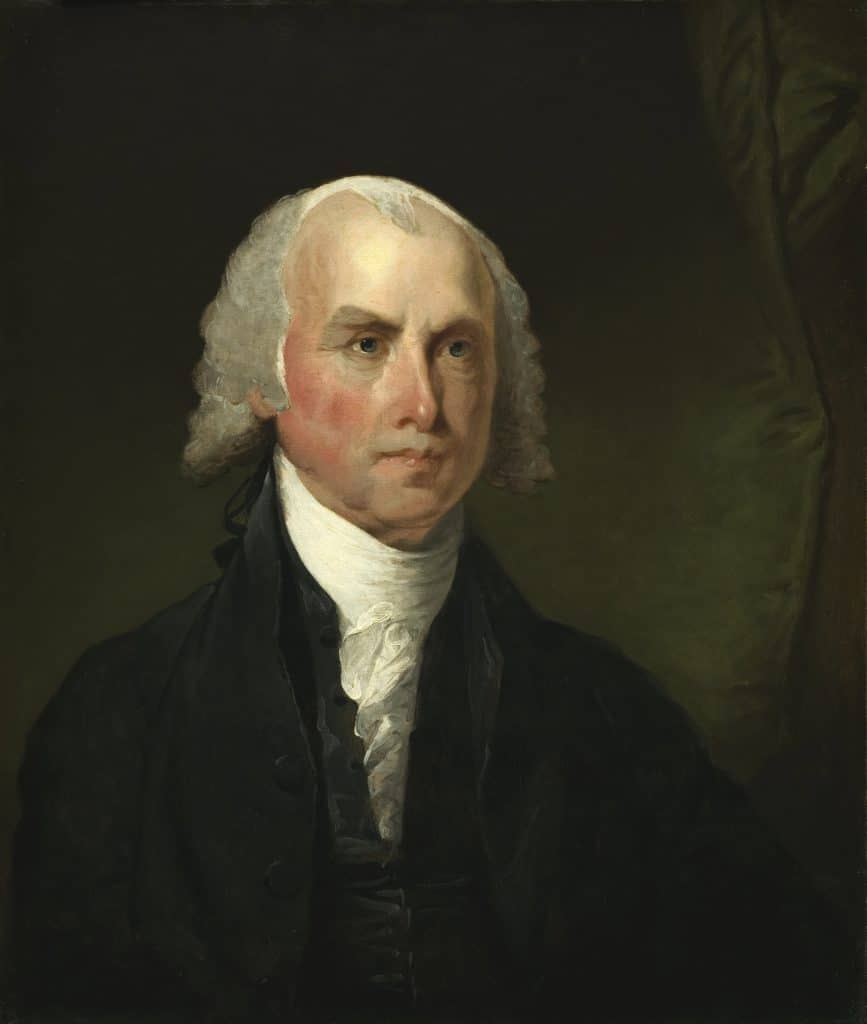