Do you want to save dozens of hours in time? Get your evenings and weekends back? Be able to teach The Red Scare to your students? 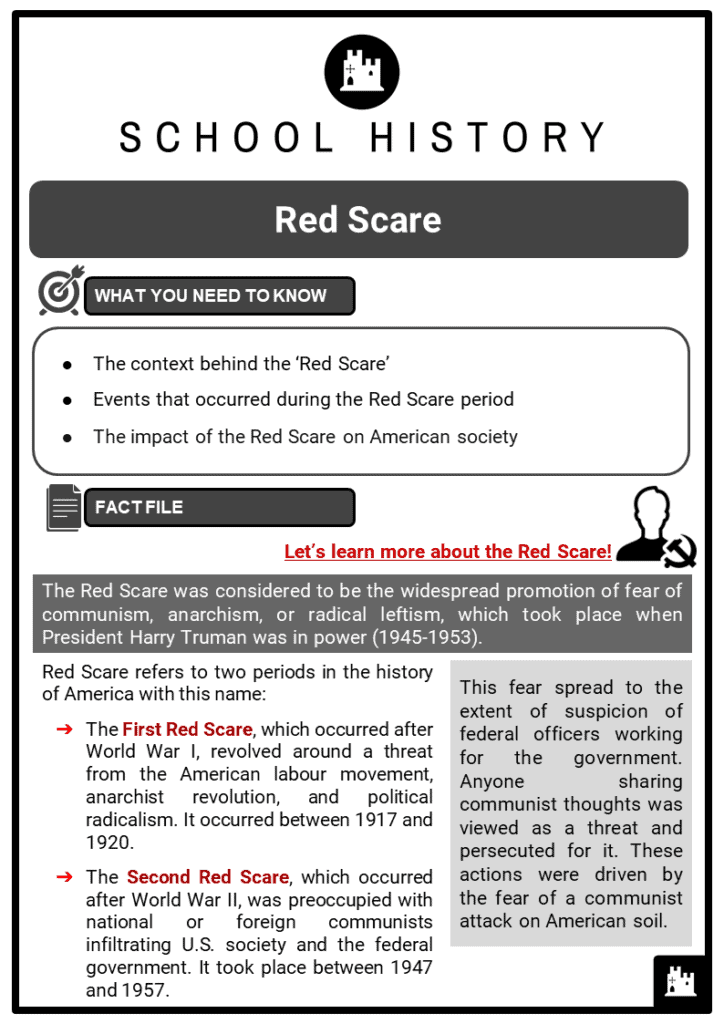 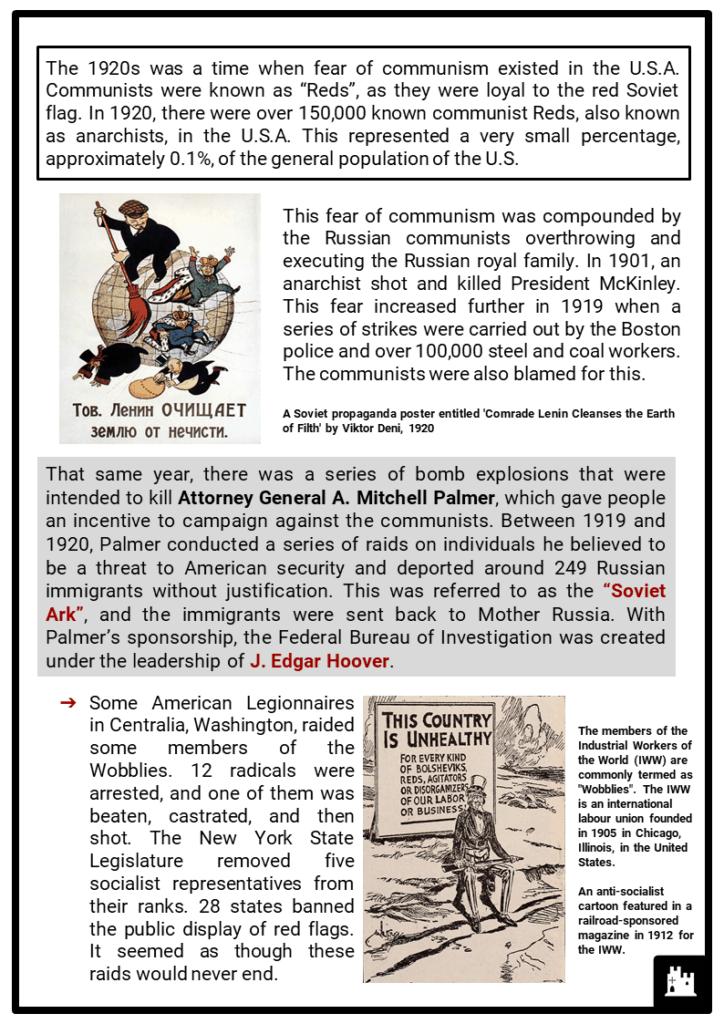 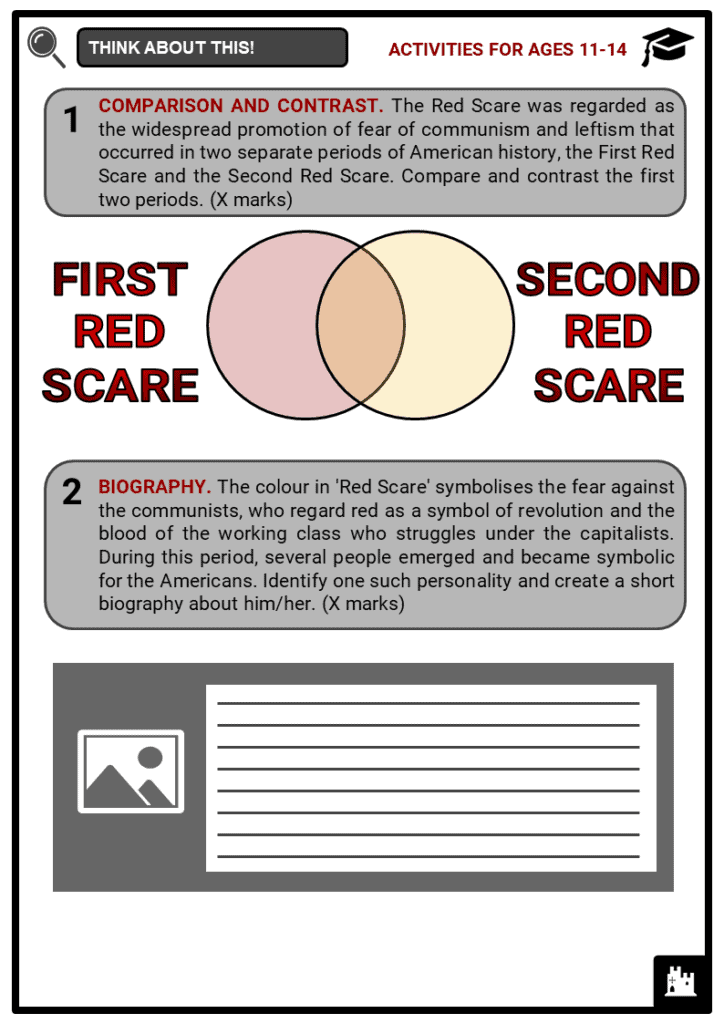 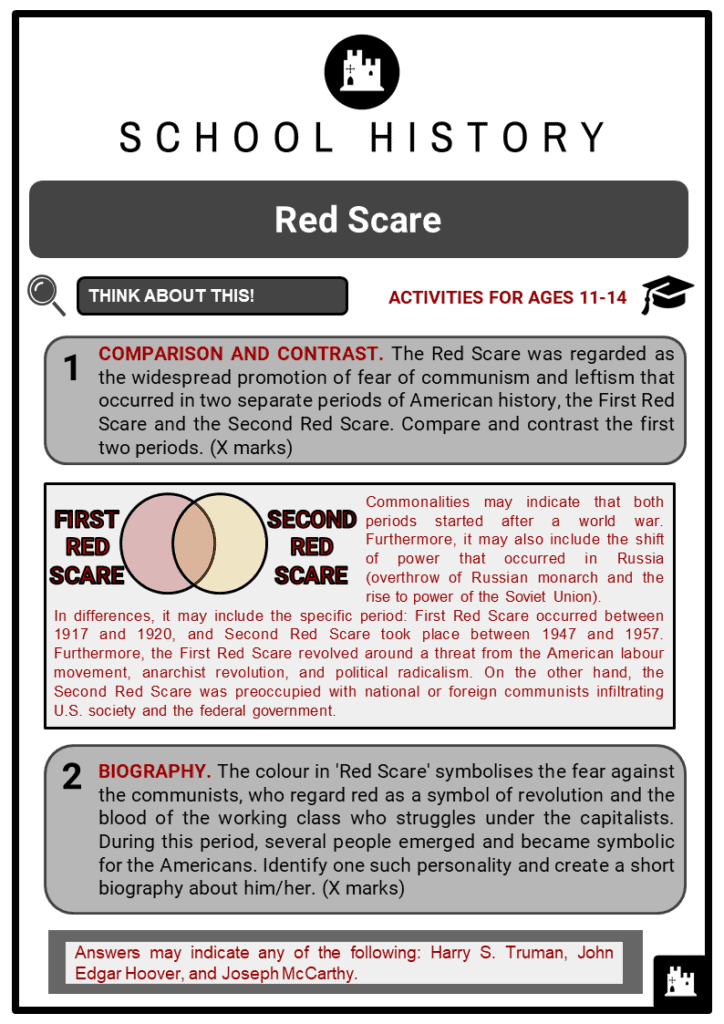 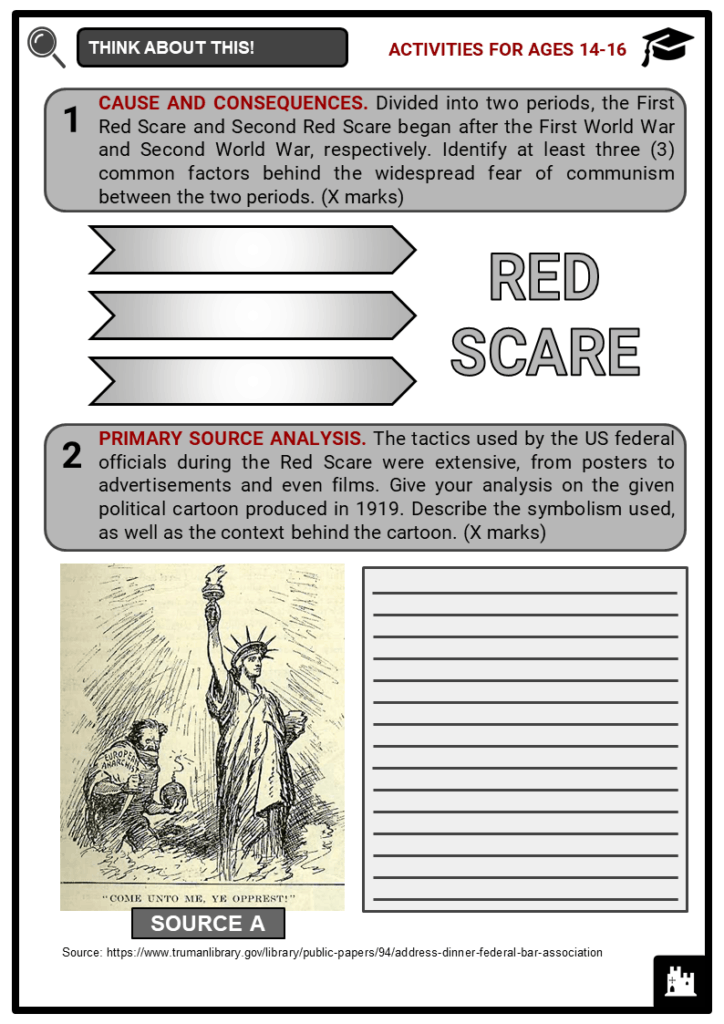 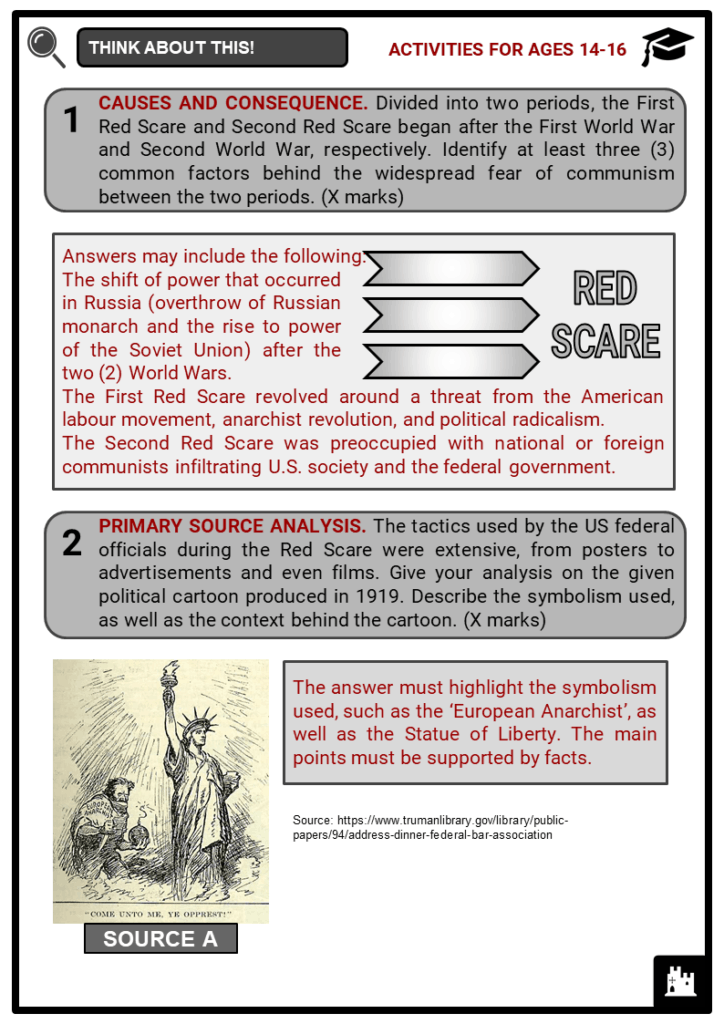 The 1920s was a time when fear of communism existed in the U.S.A. Communists were known as “Reds” as they were loyal to the red Soviet flag. Known Reds in the U.S.A. consisted of over 150,000 communists, also known as anarchists. in 1920 alone and this represented a very small percentage, approximately 0.1%, of the general population of the U.S.

This fear of communism was compounded by the Russian communists overthrowing and executing the Russian royal family. In 1901, an anarchist had shot President McKinley dead. This fear increased further in 1919 when a series of strikes were carried out by the Boston police and over 100,000 steel and coal workers. The communists were also blamed for this.

That same year a series of bomb explosions attempted to blow up America’s Attorney-General A. Mitchell Palmer, which gave people an incentive to campaign against the communists. Between 1919 and 1920, Palmer conducted a series of raids on individuals he believed to be a threat to American security and deported around 249 Russian immigrants without justification. This was referred to as the “Soviet Ark” and was sent back to Mother Russia. With Palmer's sponsorship, the Federal Bureau of Investigation was created under the leadership of J. Edgar Hoover.

Some American Legionnaires in Centralia, Washington, raided some members of the Wobblies. 12 radicals were arrested and one of them was beaten, castrated and then shot. The New York State Legislature removed five socialist representatives from their ranks. 28 states banned public display of red flags. It seemed as though these raids would never end. Responsible Americans began to speak out against Palmer's raids and demand that American civil liberties be respected. 6,000 people were arrested on New Year’s Day, of which 1,920 were imprisoned. Many had to be released within a few weeks due to lack of substantial evidence and only three guns were found in some of the suspects’ homes. Few people complained about these arrests and this just proved the fear of communism. The judicial system turned a blind eye to it under the rationale of the importance of America’s national security. By the summer of 1920, the worst of the furore had calmed down.

Many people, however, protested the arrest of Nicola Sacco and Bartolomeo Vanzetti, which took place in May 1920, when they were charged with a robbery that saw two guards killed. The two men had little comprehension of English as they were from Italy. They were both known to be anarchists and they had loaded guns on them during their arrest. Judge Thayer, the judge presiding over their trial, was known to be anti-red. 61 ‘witnesses’ claimed that they saw both men at the scene of the crime, but 107 ‘witnesses’ claimed that they had seen the two elsewhere at that time. Regardless, both men were found guilty and spent seven years in prison while their lawyers appealed in vain. Many public protests and petitions followed, but both men were executed on August 24, 1927, by the electric chair. America’s stance against communism only softened when America and Russia fought a common foe in the Second World War: Nazi Germany.

The Red Scare led to a range of actions that had a profound and enduring effect on the U.S. government and society. Communist ideas had no place in American society. The Union of Soviet Socialist Republics (USSR) had long carried out espionage activities in America with the help of U.S. citizens, and in particular during World War II. Apprehension over Soviet influence grew as the Cold War heated up and U.S. leaders decided to take action. On March 21, 1947, President Harry S. Truman signed an Executive Order known as the Loyalty Order, which stated that all federal employees had to be analysed to determine whether they were sufficiently loyal to the government or were in support of communists or anarchists.

Investigations on communist activities took place in the U.S. House of Representatives, where a body known as the House Un-American Activities Committee (HUAC) was formed in 1938. These investigations primarily focused on exposing communists that had infiltrated the federal government or subversive elements working in the Hollywood film industry, and this committee gained new momentum at the beginning of the Cold War. Hollywood, under pressure, issued negative publicity at studios and movie executives through blacklists that prevented suspected communists from gaining employment. Other industries were quick to follow.

Another congressional investigator, U.S. Senator Joseph R. McCarthy of Wisconsin (1908-57), was closely associated with the anti-communist movement and its affiliated associations. McCarthy established himself in the political landscape through intimidation and was a powerful figurehead in American politics. Celebrities, intellectuals and anyone who disagreed with his political views were falsely accused, costing them their careers and reputations. McCarthy’s reign of terror continued until his colleagues formally confronted him on his tactics in 1954.

The FBI and its director at the time, J. Edgar Hoover, assisted in many of the investigations into communist activities. Hoover, being an outspoken anti-communist, had been a key player in an earlier, though less pervasive, version of the Red Scare in the years following World War I (1914-18). With a new anti-communist crusade in the late 1940s gaining momentum and popularity, Hoover’s agency compiled extensive comprehensive files on suspected subversives through the use of surveillance, wiretaps and infiltrations.

This information obtained by the FBI proved critical in high-profile legal cases, including a case against Julius Rosenberg and his wife, Ethel, who were convicted of espionage in 1951 and executed two years later. In 1949, this information helped in the conviction of 12 well-known leaders of the American Communist Party on charges that they had plotted to overthrow the government.

International events blew public concerns into epic proportions. In 1949, the Soviet Union successfully carried out a test of a nuclear bomb and, led by Mao Zedong (1893-1976), communist forces took control of China. The following year marked the beginning of the Korean War (1950-53), which was the U.S. troops versus the communist-supported forces of North Korea. The spread of communism around the world made many U.S. citizens worry about the threat posed by the “Reds.” Figures such as McCarthy and Hoover did not work to quell this fear, rather exaggerating it where possible.

As the Red Scare intensified, the political climate became more and more conservative. Elected officials from both major parties sought to portray themselves as staunch anti-communists to win over the electorate, and few people criticised the tactics used to persecute suspected communists.

Membership to leftist groups dropped as it became apparent that association with them could lead to serious consequences. Dissenting voices from the left side of the political divide kept their silence on a number of important issues. For example, in judicial affairs, support for free speech and other civil liberties were downplayed significantly. This was epitomised by the 1951 U.S. Supreme Court ruling in Dennis v. the United States, which said that the free-speech rights of accused communists could be restricted because their actions presented a clear danger to the government.

Thousands of people thought to be communist sympathisers had their lives disrupted. They were hounded by the police, separated from friends and family and lost their jobs. Some were accused of aspiring to revolt, but these were false allegations and they had done nothing more than exercise their democratic right, which is the right to join a political party. People gradually forgot about the fear and repression they had endured at the start of the 1950s, but the Red Scare continued to influence political debate in the subsequent decades and is often referred to as an example of how unfounded fears can compromise civil liberties.

FBI director J. Edgar Hoover was quick to compare any kind of protest with communist agendas, including the civil rights demonstrations led by Martin Luther King Jr. Hoover came out saying that King was a communist and worked to intimidate and discredit the civil rights leader.