Why America was not isolationist under Roosevelt 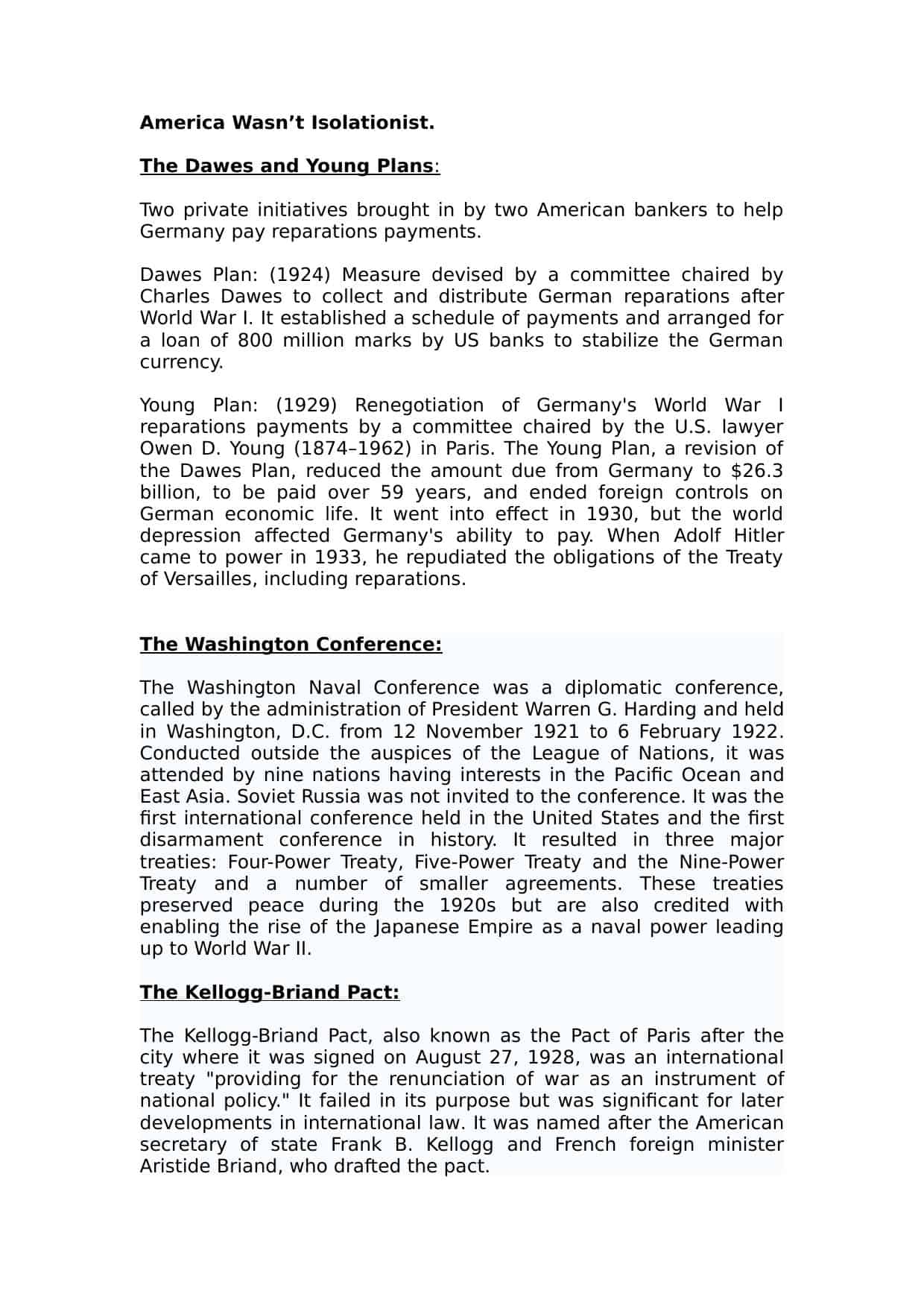 The Dawes and Young Plans:

Dawes Plan: (1924) Measure devised by a committee chaired by Charles Dawes to collect and distribute German reparations after World War I. It established a schedule of payments and arranged for a loan of 800 million marks by US banks to stabilize the German currency.

Young Plan: (1929) Renegotiation of Germany’s World War I reparations payments by a committee chaired by the U.S. lawyer Owen D. Young (1874–1962) in Paris. The Young Plan, a revision of the Dawes Plan, reduced the amount due from Germany to $26.3 billion, to be paid over 59 years, and ended foreign controls on German economic life. It went into effect in 1930, but the world depression affected Germany’s ability to pay. When Adolf Hitler came to power in 1933, he repudiated the obligations of the Treaty of Versailles, including reparations.

The Washington Conference:
The Washington Naval Conference was a diplomatic conference, called by the administration of President Warren G. Harding and held in Washington, D.C. from 12 November 1921 to 6 February 1922. Conducted outside the auspices of the League of Nations, it was attended by nine nations having interests in the Pacific Ocean and East Asia. Soviet Russia was not invited to the conference. It was the first international conference held in the United States and the first disarmament conference in history. It resulted in three major treaties: Four-Power Treaty, Five-Power Treaty and the Nine-Power Treaty and a number of smaller agreements. These treaties preserved peace during the 1920s but are also credited with enabling the rise of the Japanese Empire as a naval power leading up to World War II.

The Kellogg-Briand Pact:
The Kellogg-Briand Pact, also known as the Pact of Paris after the city where it was signed on August 27, 1928, was an international treaty “providing for the renunciation of war as an instrument of national policy.” It failed in its purpose but was significant for later developments in international law. It was named after the American secretary of state Frank B. Kellogg and French foreign minister Aristide Briand, who drafted the pact.
In its original form, the Pact of Paris was a renunciation of war between France and the US. However, Frank B. Kellogg, then U.S. Secretary of State, wanted to retain American freedom of action; Kellogg thus responded with a proposal for a multilateral pact against war open for all nations to become signatories, in hopes of diluting the French proposal into a meaningless statement of utopian idealism

The ARA’s immediate predecessor was Committee for Relief in Belgium, also headed by Hoover, which fed seven million Belgians and two million northern French during World War I during a blockade of Germany by Britain. In the immediate aftermath of the war, the ARA delivered more than four million tons of relief supplies to twenty-three war-torn European countries.

The USA’s involvement in the Russian Civil War:
The United States, along with other World War I Allied countries, conducted a military intervention into the Russian Civil War during the period of 1918 through 1920.
In March 1917, a number of events occurred which changed the dynamics of World War I. Following the abdication of Russian Tsar Nicholas II and the formation of a provisional democratic government in Russia, the U.S. President Woodrow Wilson’s final reservations about entering the war with an ally that was led by a tyrannical monarch no longer existed. Thus, the U.S. joined the war against the Central Powers while the Russian provisional government, led by Alexander Kerensky, pledged to continue fighting the Germans on the Eastern Front. In return, the U.S. began providing economic and technical support to the Russian provisional government so they could carry out their military pledge.

Dollar Diplomacy:
Dollar Diplomacy is the term used to describe the efforts of the United States — particularly under President William Howard Taft — to further its foreign policy aims in Latin America and East Asia through use of its economic power by guaranteeing loans made to foreign countries. The term was originally coined by President Taft, who claimed that U.S. operations in Latin America went from “warlike and political” to “peaceful and economic”. It was also used in Liberia, where American loans were given in 1913.

Negative Contributions by the USA:

Passing of neutrality acts:
The Neutrality Acts were a series of laws passed by the United States Congress in the 1930s, in response to the growing turmoil in Europe and Asia that eventually led to World War II. They were spurred by the growth in isolationism in the US following its costly involvement in World War I, and sought to ensure that the US would not become entangled again in foreign conflicts, especially in Europe.

The legacy of the Neutrality Acts in the 1930s was widely regarded as having been generally negative: they made no distinction between aggressor and victim, treating both equally as “belligerents”; and they limited the US government’s ability to aid Britain against Nazi Germany, until the formal declaration of war in December 1941 rendered them irrelevant.
In each case, the acts provided for the president to invoke them by finding that a state of war existed in a particular instance. This provided a loophole that President Franklin D. Roosevelt carefully exploited to ensure that US allies overseas were not unduly penalized by the acts.

World Economic Conference 1933:
The London Economic Conference was a meeting that took place between 66 nations in the summer of 1933. The purpose was to attack global depression, revive international trade, and stabilize international currencies. However, while vacationing on his yacht in the North Pacific, Franklin D. Roosevelt issued a radio message to London, condemning the conference for trying to stabilize currency, and he indirectly declared that the United States would not participate in the negotiations.

Immigration Quotas:
The Immigration Act of 1924, which included the National Origins Act, Asian Exclusion Act or the Johnson-Reed Act, was a United States federal law that limited the number of immigrants who could be admitted from any country to 2% of the number of people from that country who were already living in the United States in 1890, according to the Census of 1890. It excluded immigration to the US of Asians. It superseded the 1921 Emergency Quota Act. The law was aimed at further restricting the Southern and Eastern Europeans who had begun to enter the country in large numbers beginning in the 1890s, as well as East Asians and Asian Indians, who were prohibited from immigrating entirely.

Fordney McCumber and Hawley Smoot:
The Hawley-Smoot Tariff (or Smoot-Hawley Tariff Act) was signed into law on June 17, 1930, and raised U.S. tariffs on over 20,000 imported goods to record levels, and, in the opinion of most economists, worsened the Great Depression. Many countries retaliated, and American exports and imports plunged by more than half.