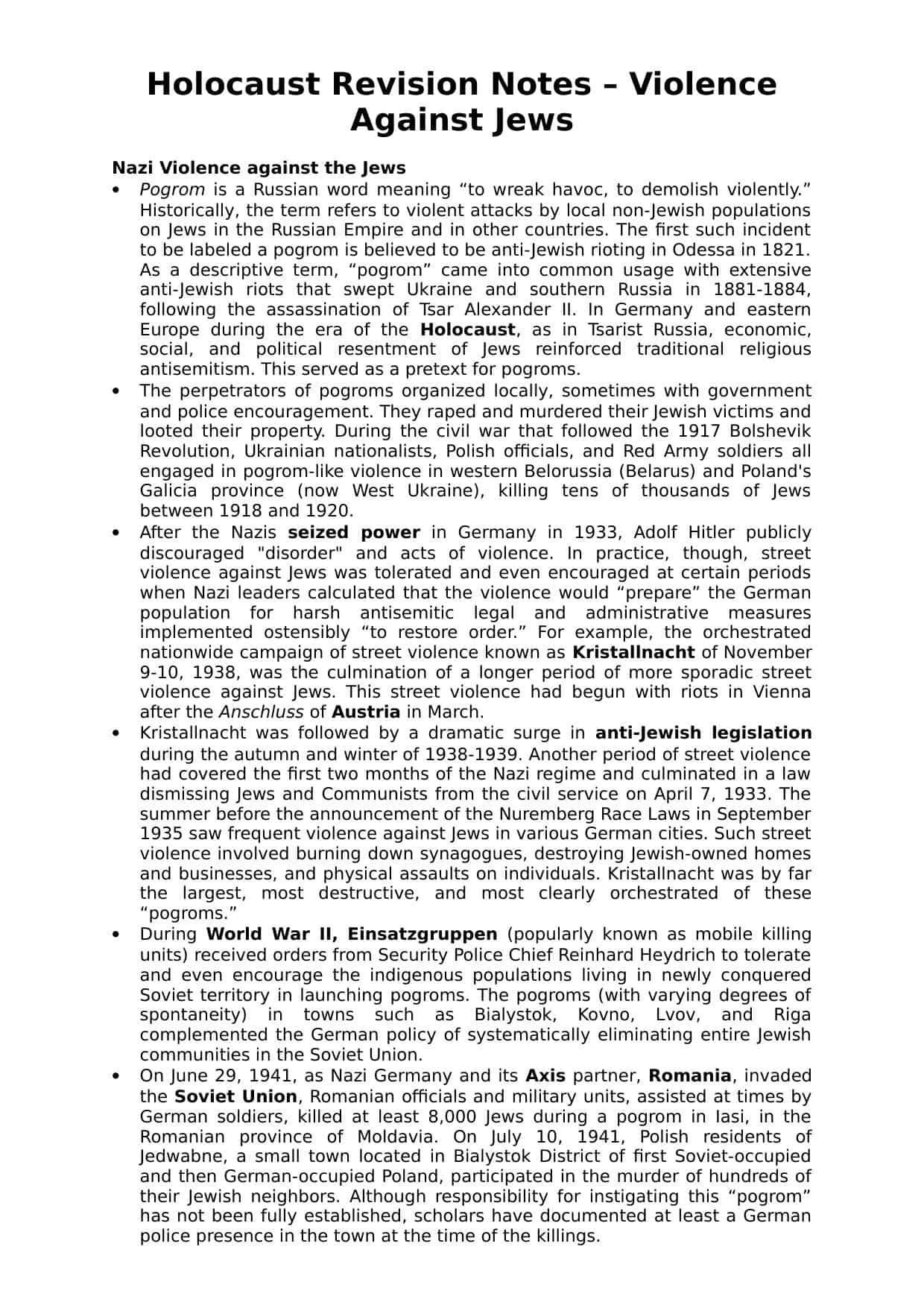 Nazi Violence against the Jews
• Pogrom is a Russian word meaning “to wreak havoc, to demolish violently.” Historically, the term refers to violent attacks by local non-Jewish populations on Jews in the Russian Empire and in other countries. The first such incident to be labeled a pogrom is believed to be anti-Jewish rioting in Odessa in 1821. As a descriptive term, “pogrom” came into common usage with extensive anti-Jewish riots that swept Ukraine and southern Russia in 1881-1884, following the assassination of Tsar Alexander II. In Germany and eastern Europe during the era of the Holocaust, as in Tsarist Russia, economic, social, and political resentment of Jews reinforced traditional religious antisemitism. This served as a pretext for pogroms.

• The perpetrators of pogroms organized locally, sometimes with government and police encouragement. They raped and murdered their Jewish victims and looted their property. During the civil war that followed the 1917 Bolshevik Revolution, Ukrainian nationalists, Polish officials, and Red Army soldiers all engaged in pogrom-like violence in western Belorussia (Belarus) and Poland’s Galicia province (now West Ukraine), killing tens of thousands of Jews between 1918 and 1920.

• After the Nazis seized power in Germany in 1933, Adolf Hitler publicly discouraged “disorder” and acts of violence. In practice, though, street violence against Jews was tolerated and even encouraged at certain periods when Nazi leaders calculated that the violence would “prepare” the German population for harsh antisemitic legal and administrative measures implemented ostensibly “to restore order.” For example, the orchestrated nationwide campaign of street violence known as Kristallnacht of November 9-10, 1938, was the culmination of a longer period of more sporadic street violence against Jews. This street violence had begun with riots in Vienna after the Anschluss of Austria in March.

• Kristallnacht was followed by a dramatic surge in anti-Jewish legislation during the autumn and winter of 1938-1939. Another period of street violence had covered the first two months of the Nazi regime and culminated in a law dismissing Jews and Communists from the civil service on April 7, 1933. The summer before the announcement of the Nuremberg Race Laws in September 1935 saw frequent violence against Jews in various German cities. Such street violence involved burning down synagogues, destroying Jewish-owned homes and businesses, and physical assaults on individuals. Kristallnacht was by far the largest, most destructive, and most clearly orchestrated of these “pogroms.”

• During World War II, Einsatzgruppen (popularly known as mobile killing units) received orders from Security Police Chief Reinhard Heydrich to tolerate and even encourage the indigenous populations living in newly conquered Soviet territory in launching pogroms. The pogroms (with varying degrees of spontaneity) in towns such as Bialystok, Kovno, Lvov, and Riga complemented the German policy of systematically eliminating entire Jewish communities in the Soviet Union.

• On June 29, 1941, as Nazi Germany and its Axis partner, Romania, invaded the Soviet Union, Romanian officials and military units, assisted at times by German soldiers, killed at least 8,000 Jews during a pogrom in Iasi, in the Romanian province of Moldavia. On July 10, 1941, Polish residents of Jedwabne, a small town located in Bialystok District of first Soviet-occupied and then German-occupied Poland, participated in the murder of hundreds of their Jewish neighbors. Although responsibility for instigating this “pogrom” has not been fully established, scholars have documented at least a German police presence in the town at the time of the killings.

• By late summer of 1941, increasing instances of corruption, plunder, settling of old scores, destruction of important economic resources, and the infiltration of former communists into groups that perpetrated the “pogroms” led the German authorities to abandon the practice on the Eastern Front. German SS and police units purged hastily recruited auxiliary police units and began to carry out systematic and controlled massacres of entire Jewish communities in the occupied Soviet Union.

• Although the Germans abandoned them as a tool of annihilation policy, pogroms did not end with World War II. In Kielce, Poland, local residents launched a pogrom against surviving and returning Jews in the city on July 4, 1946. Mobs attacked Jews after false rumours spread that Jews had abducted a Christian child whom they intended to kill for ritual purposes. The rioters killed at least 42 Jews and wounded approximately 50 more.

• The pogrom in Kielce was one of the factors that led to a mass westward migration of hundreds of thousands of Jews who had survived the Holocaust. Known as the Brihah, this movement brought Jews from Poland and other countries of eastern Europe to displaced persons camps located in the western zones of occupied Germany and Austria, and in Italy. A fear of violent pogroms was one motivation that led the vast majority of Jews to seek to leave postwar Europe.