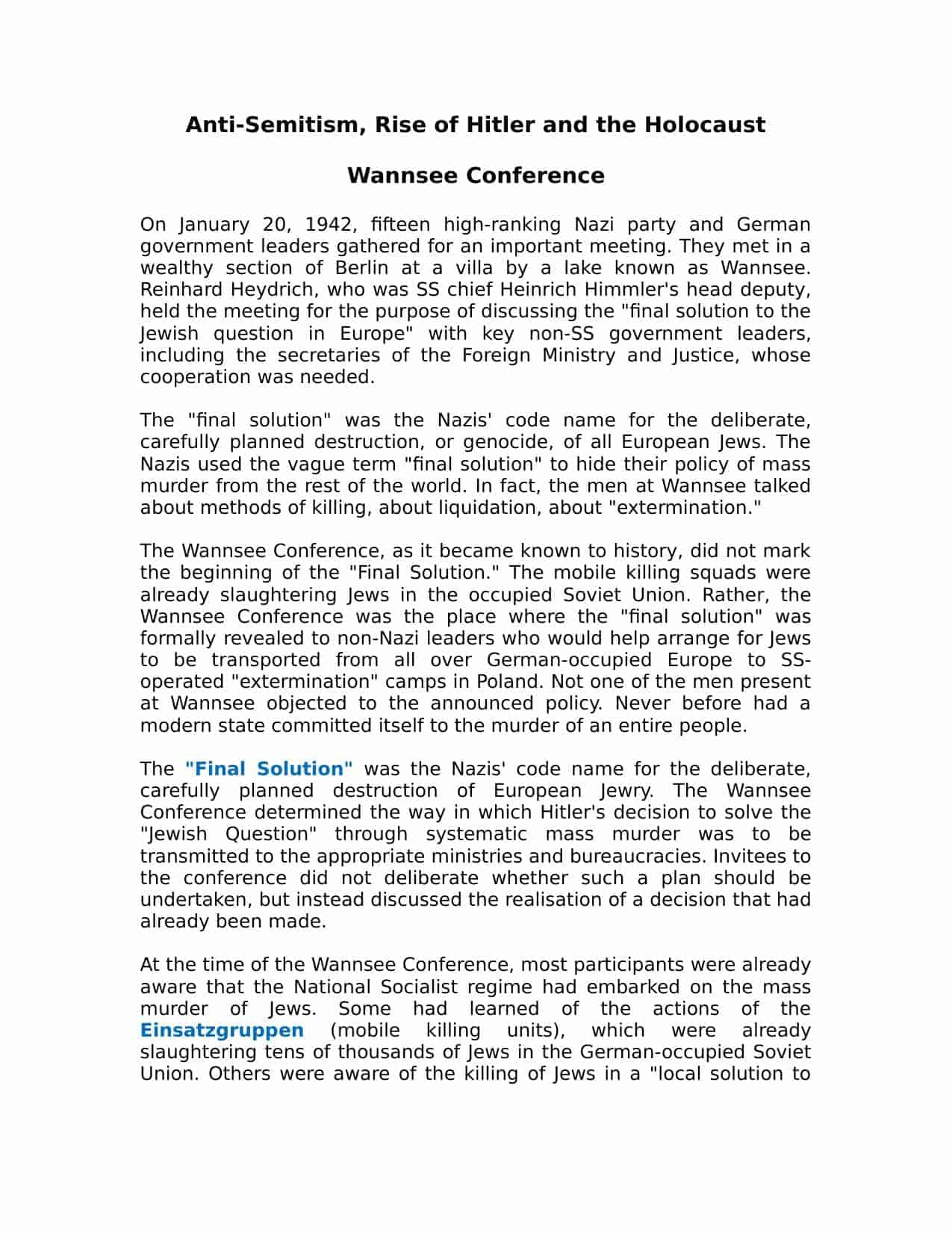 On January 20, 1942, fifteen high-ranking Nazi party and German government leaders gathered for an important meeting. They met in a wealthy section of Berlin at a villa by a lake known as Wannsee. Reinhard Heydrich, who was SS chief Heinrich Himmler’s head deputy, held the meeting for the purpose of discussing the “final solution to the Jewish question in Europe” with key non-SS government leaders, including the secretaries of the Foreign Ministry and Justice, whose cooperation was needed.

The “final solution” was the Nazis’ code name for the deliberate, carefully planned destruction, or genocide, of all European Jews. The Nazis used the vague term “final solution” to hide their policy of mass murder from the rest of the world. In fact, the men at Wannsee talked about methods of killing, about liquidation, about “extermination.”

The Wannsee Conference, as it became known to history, did not mark the beginning of the “Final Solution.” The mobile killing squads were already slaughtering Jews in the occupied Soviet Union. Rather, the Wannsee Conference was the place where the “final solution” was formally revealed to non-Nazi leaders who would help arrange for Jews to be transported from all over German-occupied Europe to SS-operated “extermination” camps in Poland. Not one of the men present at Wannsee objected to the announced policy. Never before had a modern state committed itself to the murder of an entire people.

The “Final Solution” was the Nazis’ code name for the deliberate, carefully planned destruction of European Jewry. The Wannsee Conference determined the way in which Hitler’s decision to solve the “Jewish Question” through systematic mass murder was to be transmitted to the appropriate ministries and bureaucracies. Invitees to the conference did not deliberate whether such a plan should be undertaken, but instead discussed the realisation of a decision that had already been made.

At the time of the Wannsee Conference, most participants were already aware that the National Socialist regime had embarked on the mass murder of Jews. Some had learned of the actions of the Einsatzgruppen (mobile killing units), which were already slaughtering tens of thousands of Jews in the German-occupied Soviet Union. Others were aware of the killing of Jews in a “local solution to the Jewish question” in Serbia. None of the officials present at the meeting objected to the policy announced by Heydrich.

Heydrich indicated that approximately 11,000,000 Jews were eventually to be subjected to the “Final Solution,” with the Nuremberg Laws serving as a basis for determining who was a Jew. “Under suitable supervision, the Jews shall be…taken to the east,” Heydrich announced, “and deployed in appropriate work….Able-bodied Jews, separated by sex, will be taken to those areas in large work details to build roads, and a large part will doubtlessly be lost through natural attrition. The surviving remnants…will have to be treated appropriately…” Despite the euphemisms which appeared in the protocols of the meeting, the aim of the Wannsee Conference was clear: the coordination of a policy of genocide of European Jews. What is chilling is that it took 15 men just 90 minutes to decide the fate of over 11,000,000 people.

Hitler’s last words before he killed himself were an apology. He apologized for failing to fulfill his plan and rid Germany of its Jews.