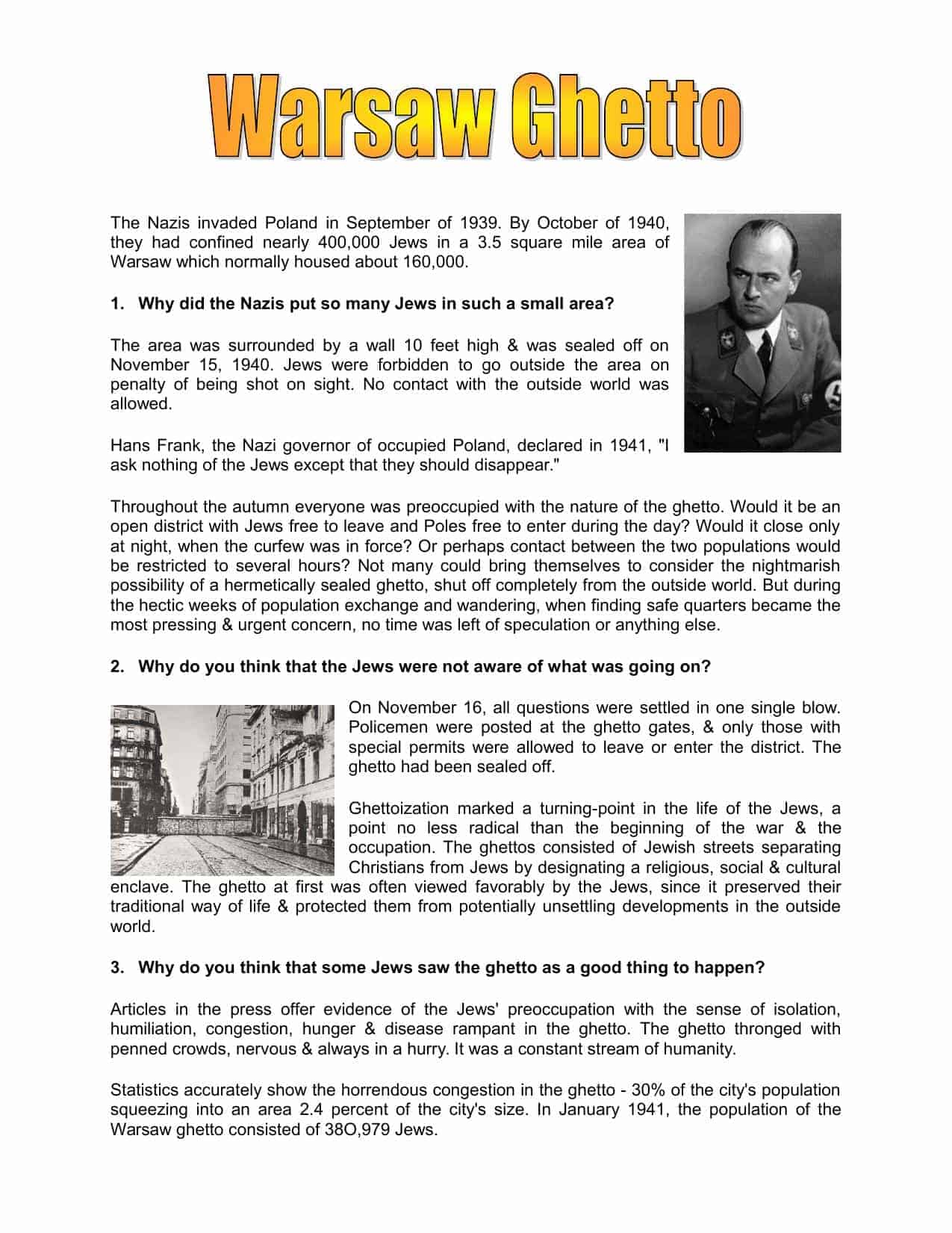 1. Why did the Nazis put so many Jews in such a small area?

The area was surrounded by a wall 10 feet high & was sealed off on November 15, 1940. Jews were forbidden to go outside the area on penalty of being shot on sight. No contact with the outside world was allowed.

Hans Frank, the Nazi governor of occupied Poland, declared in 1941, “I ask nothing of the Jews except that they should disappear.”

Throughout the autumn everyone was preoccupied with the nature of the ghetto. Would it be an open district with Jews free to leave and Poles free to enter during the day? Would it close only at night, when the curfew was in force? Or perhaps contact between the two populations would be restricted to several hours? Not many could bring themselves to consider the nightmarish possibility of a hermetically sealed ghetto, shut off completely from the outside world. But during the hectic weeks of population exchange and wandering, when finding safe quarters became the most pressing & urgent concern, no time was left of speculation or anything else.

2. Why do you think that the Jews were not aware of what was going on?

On November 16, all questions were settled in one single blow. Policemen were posted at the ghetto gates, & only those with special permits were allowed to leave or enter the district. The ghetto had been sealed off.

Ghettoization marked a turning-point in the life of the Jews, a point no less radical than the beginning of the war & the occupation. The ghettos consisted of Jewish streets separating Christians from Jews by designating a religious, social & cultural enclave. The ghetto at first was often viewed favorably by the Jews, since it preserved their traditional way of life & protected them from potentially unsettling developments in the outside world.

3. Why do you think that some Jews saw the ghetto as a good thing to happen?

Articles in the press offer evidence of the Jews’ preoccupation with the sense of isolation, humiliation, congestion, hunger & disease rampant in the ghetto. The ghetto thronged with penned crowds, nervous & always in a hurry. It was a constant stream of humanity.

Statistics accurately show the horrendous congestion in the ghetto – 30% of the city’s population squeezing into an area 2.4 percent of the city’s size. In January 1941, the population of the Warsaw ghetto consisted of 38O,979 Jews.

The ghetto population kept increasing due to deportations & evacuations from the neighboring towns & villages & with refugees from other Jewish ghettos & settlements. Because of the soaring death rates among the ghetto population this increase was not always reflected in the statistics.

4. What do YOU think was killing the Jews so quickly?

Even if the death rate had maintained its 1941 levels without the Nazi policy of mass murder in the death camps the harvest of death in the Warsaw ghetto alone would have surpassed the loss of life in countries such as France, Belgium, Italy, or Romania throughout the war. In other words, if the ghetto had been kept in operation for another ten years, the entire Jewish population of Warsaw would have been decimated even without the gas chambers of Treblinka & Auschwitz.

5. Why was it not possible for the Nazis to keep the ghettos in operation for 10 years?

It is impossible to say for certain whether this appalling death rate was linked to a cold-blooded, calculated Nazi plan regarding ghettos, but statements such as the following by Governor Frank are more than suggestive. “The fact is that we are sentencing 1.2 million Jews to death by hunger. There is no need to elaborate on that. This is quite clear & if the Jews do not die of hunger then anti-Jewish decrees have to be hurried up. Let us hope this will be the case.” By this point Frank was aware of the plan for the complete and final extermination of the Jews.

Historians know of other statements by senior Nazi officials in which better food rations are recommended for Jews so that the population might be utilised properly as a labour force. According to other statements the harshest possible measures were to be taken against the Jews since they could not be put to death.

6. What was the ONE reason why some people wanted to properly feed the Jews in the ghetto?

It appears that before early 1942 the German Government did not have a plan or know what fate awaited the Jews. It was clear that the ghetto & other anti-Jewish measures were temporary which would have to be followed by permanent arrangements in line with Nazi doctrine. Various proposals were put forward, including the plans to send all or most of the Jews to a kind of reservation in the Lublin area.

With the launching of the ”Final Solution” in 1942 all of these plans were abandoned.
Although some of the problems in the ghetto might be seen as typical of the shortages and hardships that every society experiences in normal times, the ghetto residents faced many adversities that stemmed directly from the quarantine & the dreadful conditions the Nazis had imposed on them. Hunger & the permanent shortage of food were among the most acutely felt hardships. The hunger problem was not just a “matter of bread,” for bread was a delicacy in the ghetto. The food that people dreamed about night & day was of a much coarser kind.

Food was rationed to everyone. The official daily rations were as follows: 2,614 calories for Germans, 669 calories for Poles & 184 calories for Jews. Germans & Poles found ways to obtain additional, higher quality food in the free & black markets to which they had access. This source was closed to foreign Jews who could not tap into the supply networks linking the countryside with the city. Smuggling food into the ghetto thus became the only source of acquiring supplementary provisions.

7. Who would undertook smuggling duties for Jewish families?

On July 22, 1942, the SS, on orders from Heinrich Himmler, began a massive “resettlement” of the Jews, taking them out of the ghetto to extermination camps where they were to be gassed.

The Jewish Council in the ghetto was ordered to deliver 6000 persons a day for deportation. In just two months a total of 310,322 Jews were sent to their deaths in Nazi extermination camps. By the end of September only 60,000 Jews remained.

In January of 1943, Himmler ordered the SS to remove the remaining 60,000 Jews from the ghetto by February 15.

However, the remaining Jews knew by now that deportation meant death & chose to resist. A Jewish Fighting Organization, called ZOB, had been formed, consisting of 22 groups, each having 20 to 30 men, boys & women. The group sent desperate appeals for weapons to anti-Nazi Poles outside the ghetto & were supplied with weapons to successfully resist deportation by attacking from rooftops, cellars & attics.

8. Are you surprised that weapons could be smuggled into the ghetto? Why do you think that Jews not smuggle weapons in earlier?

As a result, 20 Germans were killed & 50 wounded.
The Jewish resistance combined with the severe winter weather & a shortage of trains, prevented the SS from meeting Himmler’s February deadline.

In the spring, Himmler ordered the SS to conduct a “special action” against the Jews that would clear out the entire ghetto in just three days. By now, the size of the ghetto had been reduced to an area measuring only 1,000 yards by 300 yards.

9. Why might the Jews have had the advantage when fighting the Nazis in the ghetto?

The first attack by the SS was repulsed by the Jews, leaving 12 Germans dead. The Germans renewed the attack, but found it difficult to kill or capture the small battle groups of Jews, who would fight, then retreat through a maze of cellars, sewers and other hidden passageways to escape capture.
On the fifth day of the battle, an infuriated Himmler ordered the SS to comb out the ghetto “with the greatest severity & relentless tenacity.” SS General Stroop decided to burn down the entire ghetto, block by block.

10. What might he have assumed about the strength of the Jews in the ghetto and why?

A report filed by Stroop described the scene: “The Jews stayed in the burning buildings until because of the fear of being burned alive they jumped down from the upper stories? With their bones broken, they still tried to crawl across the street into buildings which had not yet been set on fire. Despite the danger of being burned alive the Jews & bandits often preferred to return into the flames rather than risk being caught by us.”
The burnings & renewed German attacks continued but the Jews in Warsaw resisted for a total of 28 days.

11. How would the Warsaw uprising have affected Jews in other ghettos? Give both a positive and negative reaction.

On May 16, 1943, amid the relentless German assault, the Jewish resistance finally ended. Stroop sent a battle report stating, “The former Jewish quarter of Warsaw is no longer in existence. The large scale action was terminated at 2015 hours by blowing up the Warsaw synagogue. Total number of Jews dealt with: 56,065, including both Jews caught and Jews whose extermination can be proved.”

Polish sources estimated 300 Germans were killed and 1000 wounded. The Einsatzgruppen were given the job of clearing out the Jewish dead from the Warsaw Ghetto.