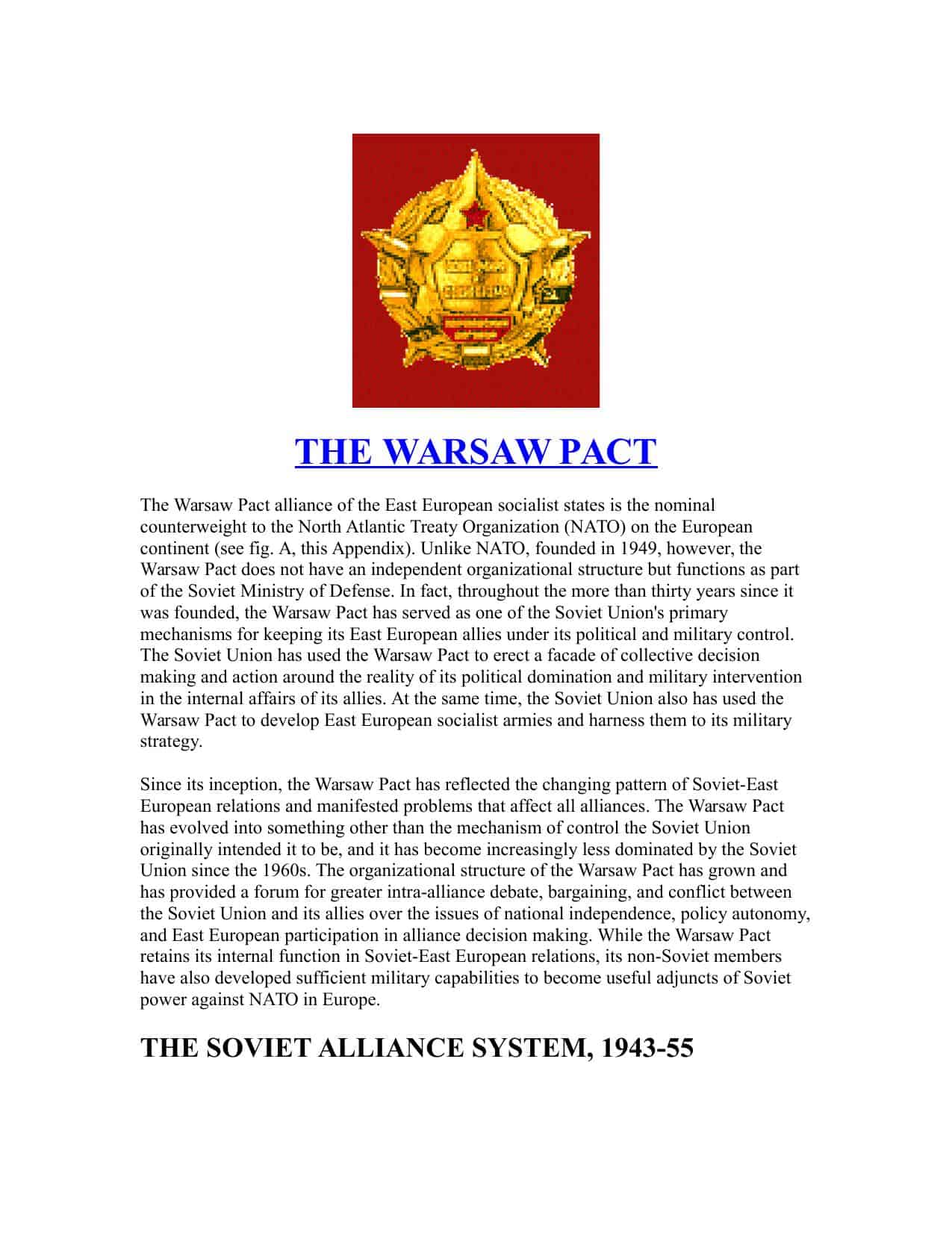 The Warsaw Pact alliance of the East European socialist states is the nominal counterweight to the North Atlantic Treaty Organization (NATO) on the European continent . Unlike NATO, founded in 1949, however, the Warsaw Pact does not have an independent organizational structure but functions as part of the Soviet Ministry of Defense. In fact, throughout the more than thirty years since it was founded, the Warsaw Pact has served as one of the Soviet Union’s primary mechanisms for keeping its East European allies under its political and military control.

Since its inception, the Warsaw Pact has reflected the changing pattern of Soviet-East European relations and manifested problems that affect all alliances. The Warsaw Pact has evolved into something other than the mechanism of control the Soviet Union originally intended it to be, and it has become increasingly less dominated by the Soviet Union since the 1960s. The organizational structure of the Warsaw Pact has grown and has provided a forum for greater intra-alliance debate, bargaining, and conflict between the Soviet Union and its allies over the issues of national independence, policy autonomy, and East European participation in alliance decision making. While the Warsaw Pact retains its internal function in Soviet-East European relations, its non-Soviet members have also developed sufficient military capabilities to become useful adjuncts of Soviet power against NATO in Europe.

THE SOVIET ALLIANCE SYSTEM, 1943-55
Long before the establishment of the Warsaw Pact in 1955, the Soviet Union had molded the East European states into an alliance serving its security interests. While liberating Eastern Europe from Nazi Germany in World War II, the Red Army established political and military control over that region. The Soviet Union’s size, economic weight, and sheer military power made its domination inevitable in this part of Europe, which historically had been dominated by great powers. The Soviet Union intended to use Eastern Europe as a buffer zone for the forward defense of its western borders and to keep threatening ideological influences at bay. Continued control of Eastern Europe became second only to defense of the homeland in the hierarchy of Soviet security priorities. The Soviet Union ensured its control of the region by turning the East European countries into subjugated allies.

The Organization of East European National Units, 1943- 45
During World War II, the Soviet Union began to build what Soviet sources refer to as history’s first coalition of a progressive type when it organized or reorganized the armies of Eastern Europe to fight with the Red Army against the German Wehrmacht. The command and control procedures established in this military alliance would serve as the model on which the Soviet Union would build the Warsaw Pact after 1955. During the last years of the war, Soviet commanders and officers gained valuable experience in directing multinational forces that would later be put to use in the Warsaw Pact. The units formed between 1943 and 1945 also provided the foundation on which the Soviet Union could build postwar East European national armies.

The Red Army began to form, train, and arm Polish and Czechoslovak national units on Soviet territory in 1943. These units fought with the Red Army as it carried its offensive westward into German-occupied Poland and Czechoslovakia and then into Germany itself. By contrast, Bulgaria, Hungary, and Romania were wartime enemies of the Soviet Union. Although ruled by ostensibly fascist regimes, these countries allied with Nazi Germany mainly to recover territories lost through the peace settlements of World War I or seized by the Soviet Union under the terms of the 1939 Nazi-Soviet Non-Aggression Pact. However, by 1943 the Red Army had destroyed the Bulgarian, Hungarian, and Romanian forces fighting alongside the Wehrmacht. In 1944 it occupied Bulgaria, Hungary, and Romania, and shortly thereafter it began the process of transforming the remnants of their armies into allied units that could re-enter the war on the side of the Soviet Union. These allied units represented a mix of East European nationals fleeing Nazi occupation, deportees from Soviet-occupied areas, and enemy prisoners-of-war. Red Army political officers organized extensive indoctrination programs in the allied units under Soviet control and purged any politically suspect personnel. In all, the Soviet Union formed and armed more than 29 divisions and 37 brigades or regiments, which included more than 500,000 East European troops.