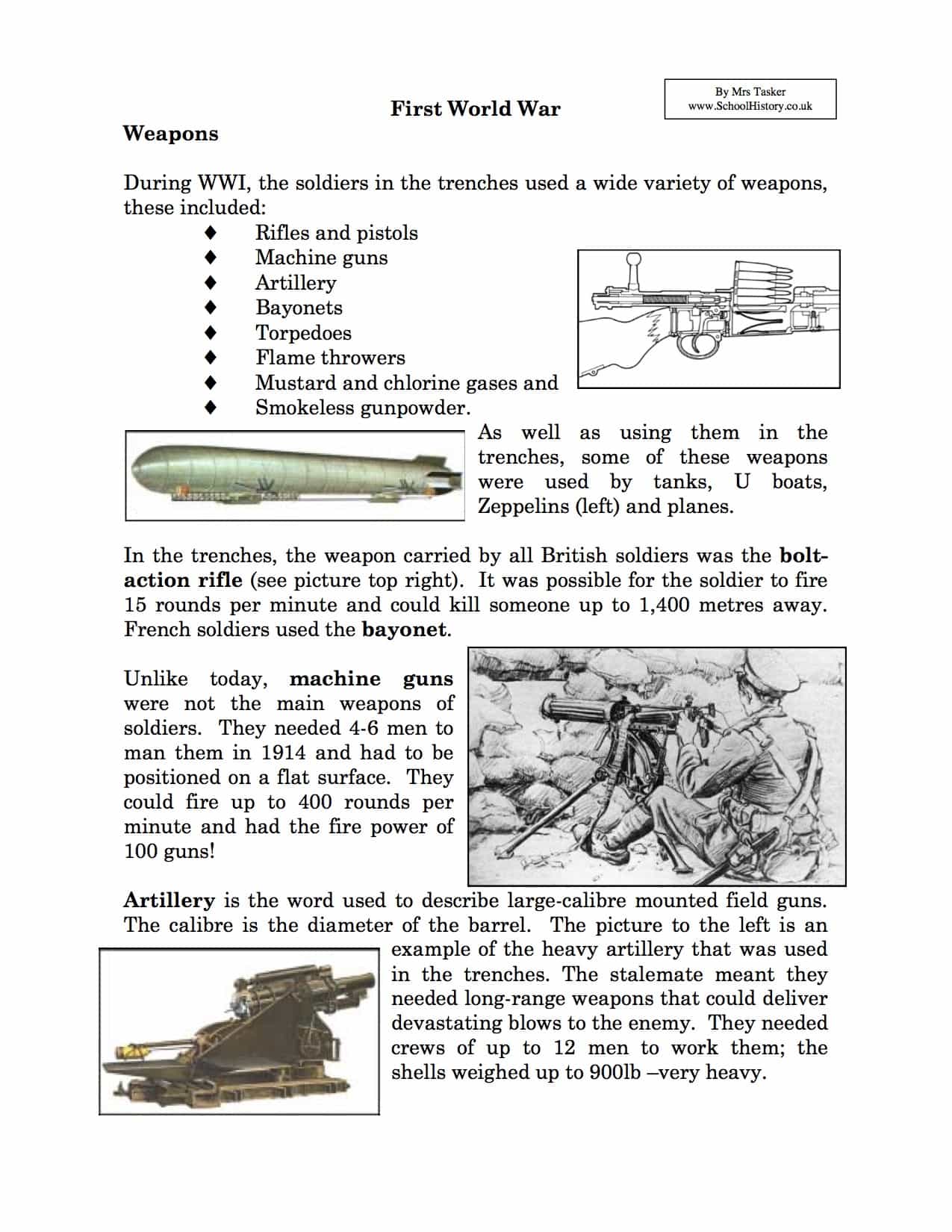 During WWI, the soldiers in the trenches used a wide variety of weapons, these included:

As well as using them in the trenches, some of these weapons were used by tanks, U boats, Zeppelins and planes.

In the trenches, the weapon carried by all British soldiers was the bolt- action rifle (see picture top right). It was possible for the soldier to fire 15 rounds per minute and could kill someone up to 1,400 metres away. French soldiers used the bayonet.

Unlike today, machine guns were not the main weapons of soldiers. They needed 4-6 men to man them in 1914 and had to be positioned on a flat surface. They could fire up to 400 rounds per minute and had the fire power of 100 guns!

Artillery is the word used to describe large-calibre mounted field guns. The calibre is the diameter of the barrel. The picture to the left is an example of the heavy artillery that was used in the trenches. The stalemate meant they needed long-range weapons that could deliver devastating blows to the enemy. They needed crews of up to 12 men to work them; the shells weighed up to 900lb –very heavy.
    
This war was also the first to use chlorine and mustard gas. The German army was the first to use chlorine in 1915 at Ypres.
French soldiers had not come across this before and assumed that it was a smoke screen. It has a distinctive smell – a mixture of pepper and
pineapple – and they only realised they were being gassed when they started to have chest pains and a burning sensation in their throats! Death is painful – you suffocate!
The problem with using chlorine is, weather conditions must be right before it is used. WHY?

Afterwards, Allied forces discovered that urine-soaked cotton pads neutralised the chlorine. However, they found it difficult to fight like this!!

Mustard gas was the most deadly biological weapon that was used in the trenches. It was odourless and took 12 hours to take effect! It was also very powerful, only small amounts needed to be added to shells to be effective and it remained active for several weeks when it landed in the soil!

The nastiest thing about mustard gas is that it made the skin blister, the eyes sore and the victim would start to vomit. It would cause internal and external bleeding, and would target the lungs. It could take up to 5 weeks to die!