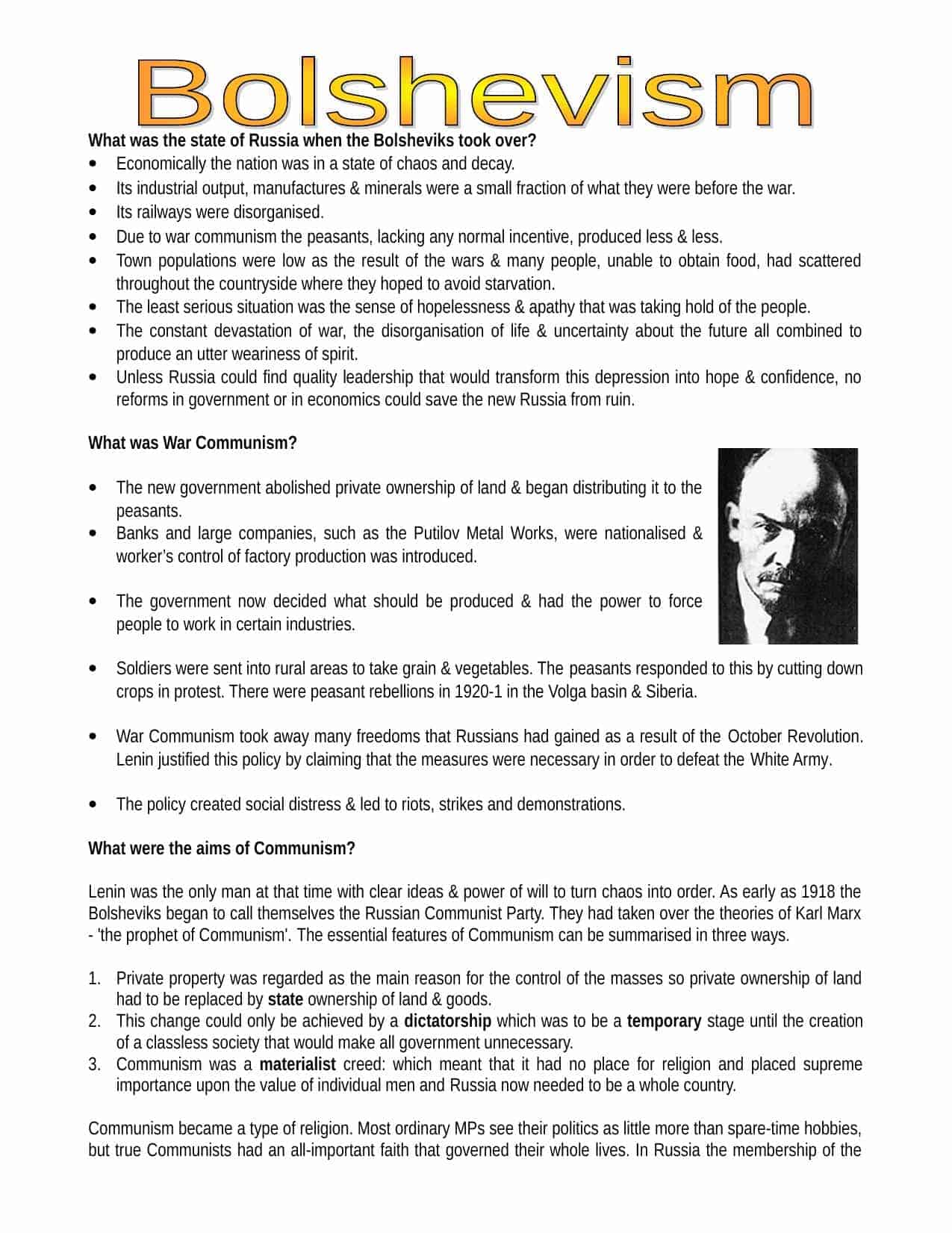 What was the state of Russia when the Bolsheviks took over?

• Economically the nation was in a state of chaos and decay.
• Its industrial output, manufactures & minerals were a small fraction of what they were before the war.
• Its railways were disorganised.
• Due to war communism the peasants, lacking any normal incentive, produced less & less.
• Town populations were low as the result of the wars & many people, unable to obtain food, had scattered throughout the countryside where they hoped to avoid starvation.
• The least serious situation was the sense of hopelessness & apathy that was taking hold of the people.
• The constant devastation of war, the disorganisation of life & uncertainty about the future all combined to produce an utter weariness of spirit.
• Unless Russia could find quality leadership that would transform this depression into hope & confidence, no reforms in government or in economics could save the new Russia from ruin.

What was War Communism?

• The new government abolished private ownership of land & began distributing it to the peasants.
• Banks and large companies, such as the Putilov Metal Works, were nationalised & worker’s control of factory production was introduced.
• The government now decided what should be produced & had the power to force people to work in certain industries.
• Soldiers were sent into rural areas to take grain & vegetables. The peasants responded to this by cutting down crops in protest. There were peasant rebellions in 1920-1 in the Volga basin & Siberia.
• War Communism took away many freedoms that Russians had gained as a result of the October Revolution. Lenin justified this policy by claiming that the measures were necessary in order to defeat the White Army.
• The policy created social distress & led to riots, strikes and demonstrations.

What were the aims of Communism?

Lenin was the only man at that time with clear ideas & power of will to turn chaos into order. As early as 1918 the Bolsheviks began to call themselves the Russian Communist Party. They had taken over the theories of Karl Marx – ‘the prophet of Communism’. The essential features of Communism can be summarised in three ways.

1. Private property was regarded as the main reason for the control of the masses so private ownership of land had to be replaced by state ownership of land & goods.
2. This change could only be achieved by a dictatorship which was to be a temporary stage until the creation of a classless society that would make all government unnecessary.
3. Communism was a materialist creed: which meant that it had no place for religion and placed supreme importance upon the value of individual men and Russia now needed to be a whole country.

Communism became a type of religion. Most ordinary MPs see their politics as little more than spare-time hobbies, but true Communists had an all-important faith that governed their whole lives. In Russia the membership of the Communist Party, until Russia’s entry into the WWII, was never more than 1/100 of the population but these held their belief so fanatically that they were able to impose revolutionary changes upon the more passive minority.