Why was Bismarck so important for uniting Germany

Download Why was Bismarck so important for uniting Germany 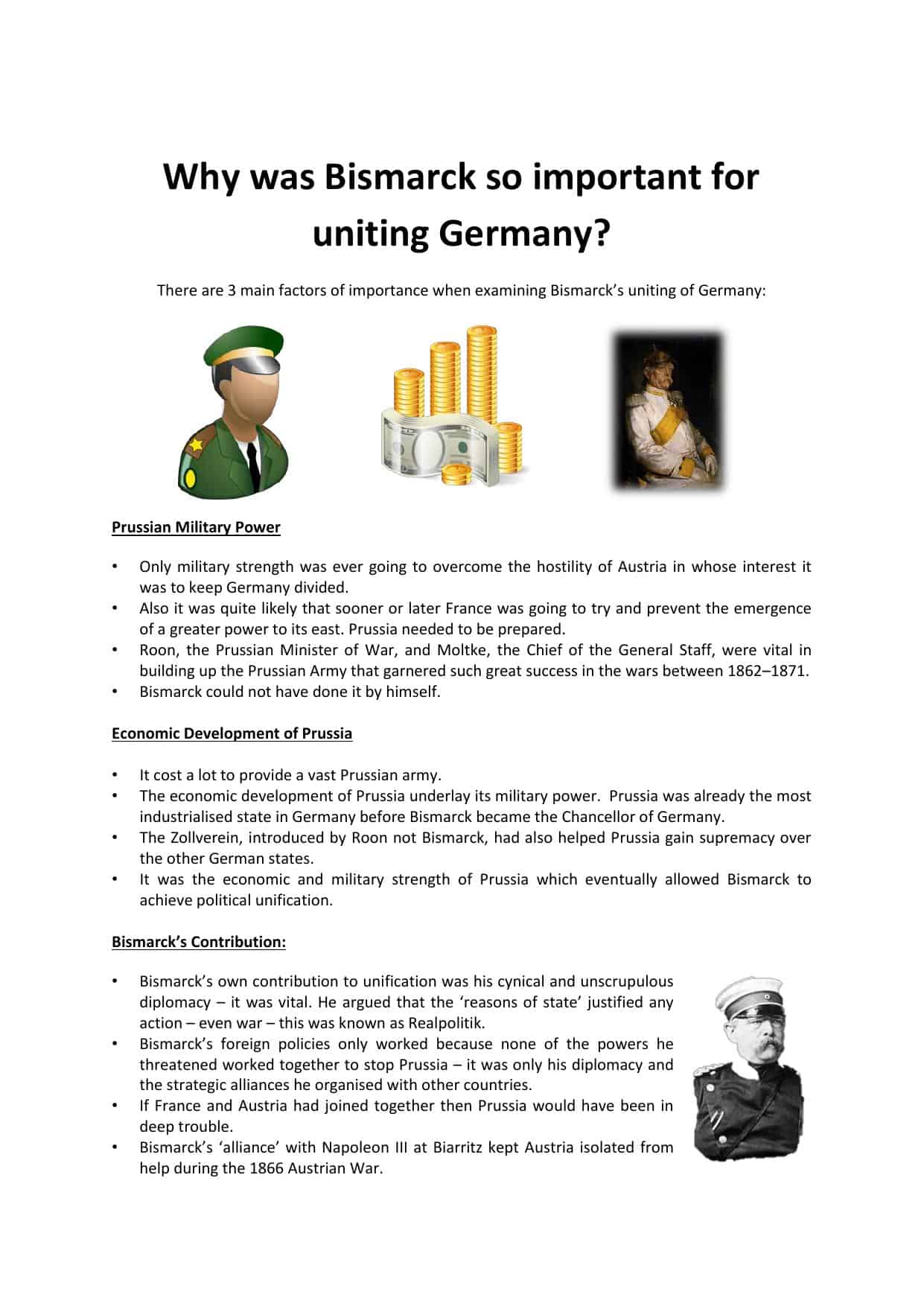 Prussian Military Power
• Only military strength was ever going to overcome the hostility of Austria in whose interest it was to keep Germany divided.
• Also it was quite likely that sooner or later France was going to try and prevent the emergence of a greater power to its east. Prussia needed to be prepared.
• Roon, the Prussian Minister of War, and Moltke, the Chief of the General Staff, were vital in building up the Prussian Army that garnered such great success in the wars between 1862–1871.
• Bismarck could not have done it by himself. Economic Development of Prussia
• It cost a lot to provide a vast Prussian army.
• The economic development of Prussia underlay its military power. Prussia was already the most
industrialised state in Germany before Bismarck became the Chancellor of Germany.
• The Zollverein, introduced by Roon not Bismarck, had also helped Prussia gain supremacy over
the other German states.
• It was the economic and military strength of Prussia which eventually allowed Bismarck to
achieve political unification.
Bismarck’s Contribution:
• Bismarck’s own contribution to unification was his cynical and unscrupulous diplomacy – it was vital. He argued that the ‘reasons of state’ justified any action – even war – this was known as Realpolitik.
• Bismarck’s foreign policies only worked because none of the powers he threatened worked together to stop Prussia – it was only his diplomacy and the strategic alliances he organised with other countries.
• If France and Austria had joined together then Prussia would have been in deep trouble.
• Bismarck’s ‘alliance’ with Napoleon III at Biarritz kept Austria isolated from help during the 1866 Austrian War.
       
• Bismarck’s lenient treatment after the Seven Week’s War made sure that they did not get involved in the Franco-Prussian War in 1870.
• Bismarck also kept Britain neutral by raising doubts over France’s intents on Belgium.
• One further thing that he did was encourage Russia to take advantage of France’s involvement in
the Franco-Prussian War to ignore the Black Sea Clauses of the Treaty of Paris of 1856.
• The Black Sea Clauses had forbidden Russia from keeping warships.
• The Treaty of Paris had been forced on Russia by Britain and France after the Crimean War – it
was yet another way of isolating France during the Franco-Prussian War.