Do you want to save dozens of hours in time? Get your evenings and weekends back? Be able to teach Horses in World War I to your students? 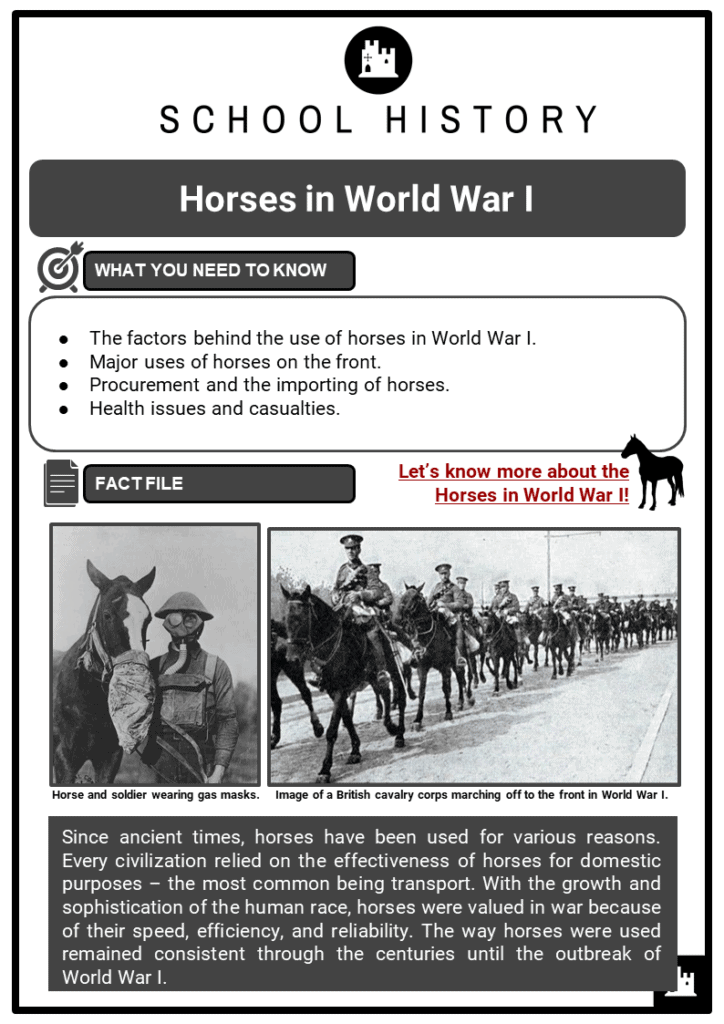 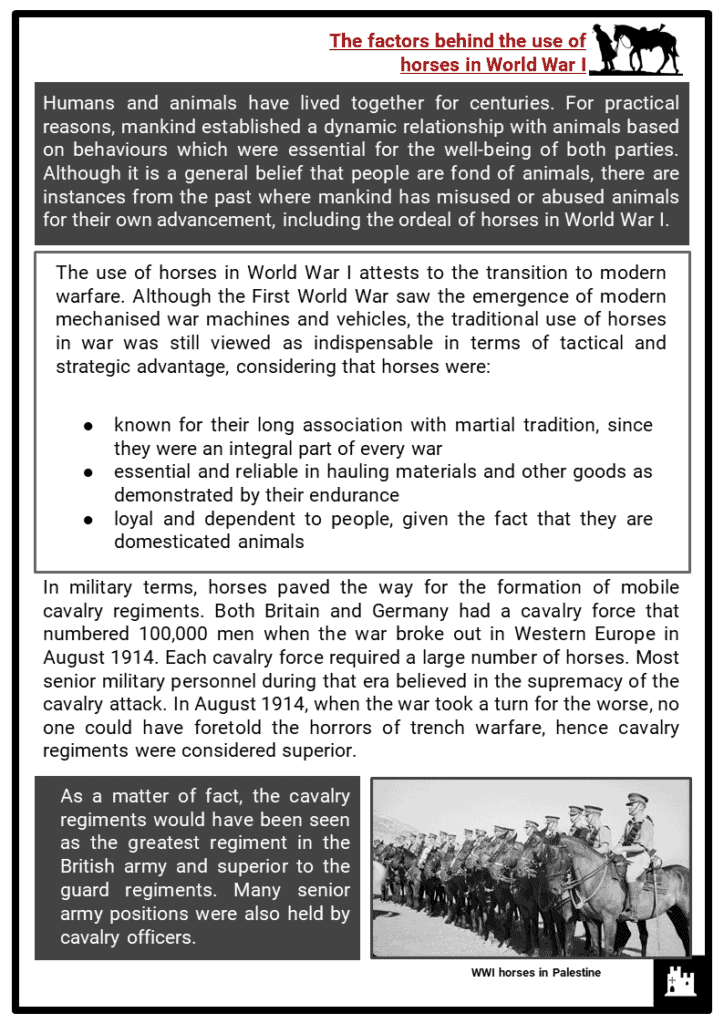 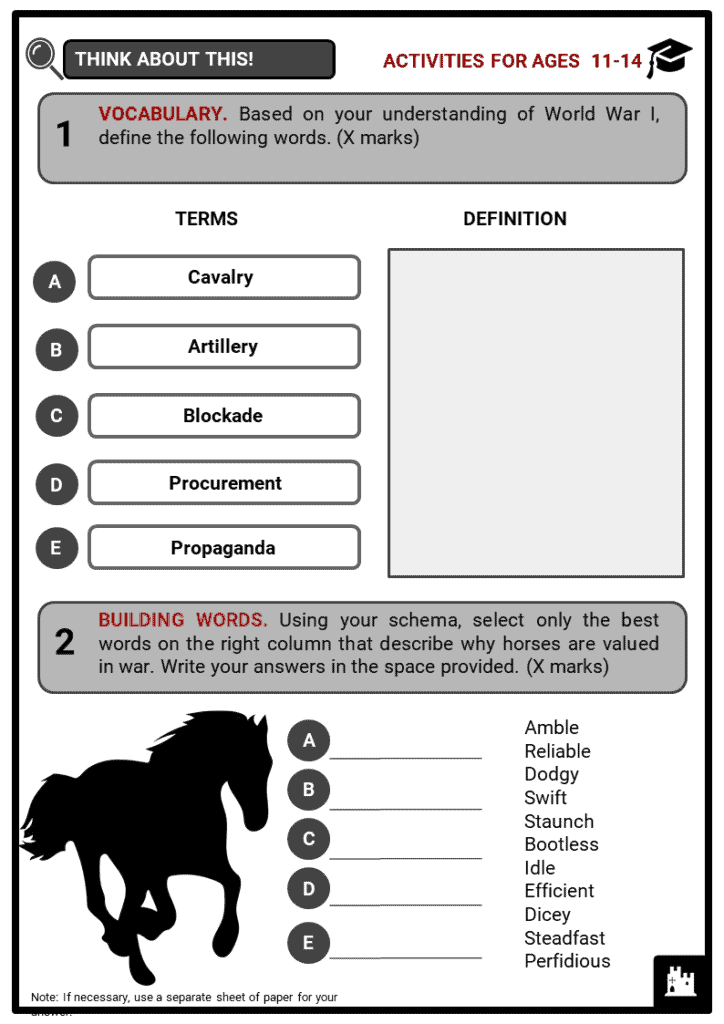 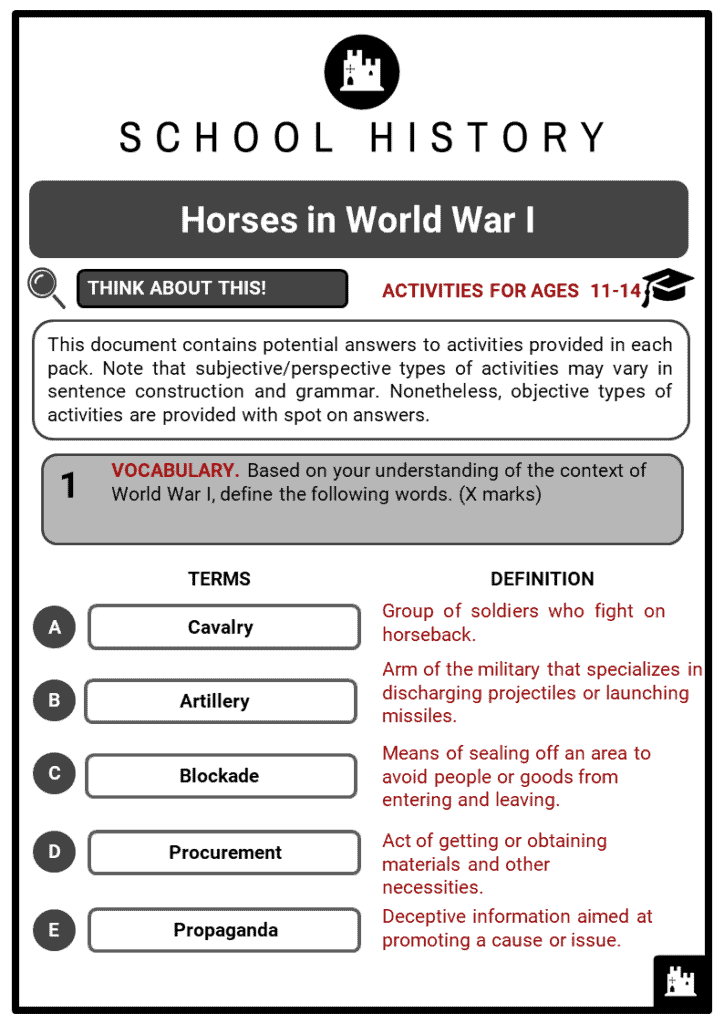 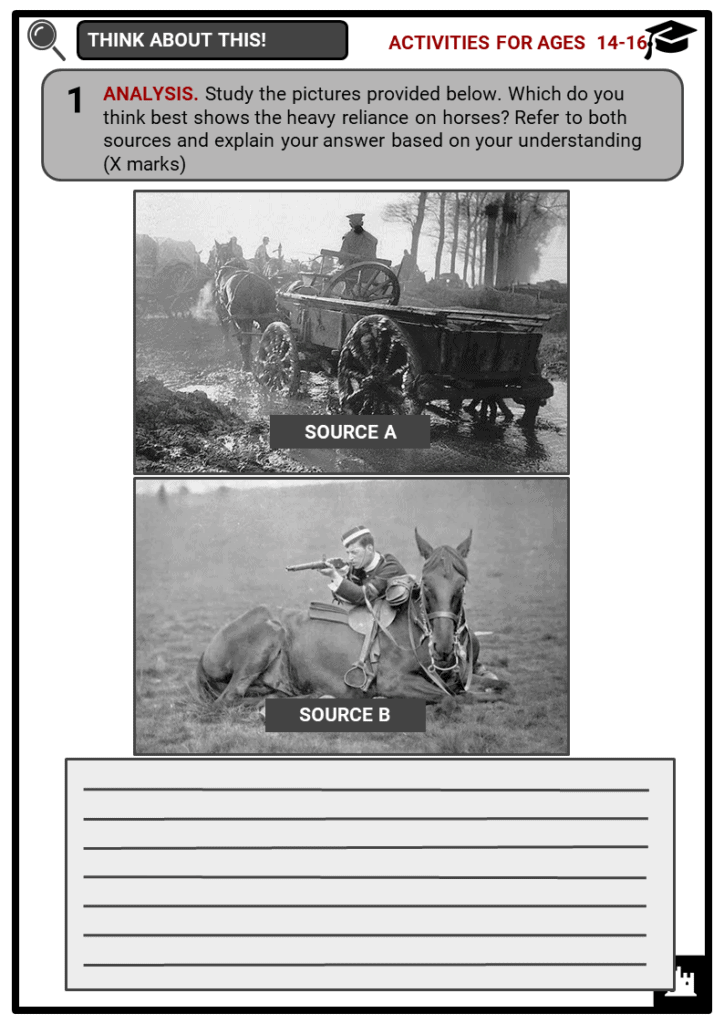 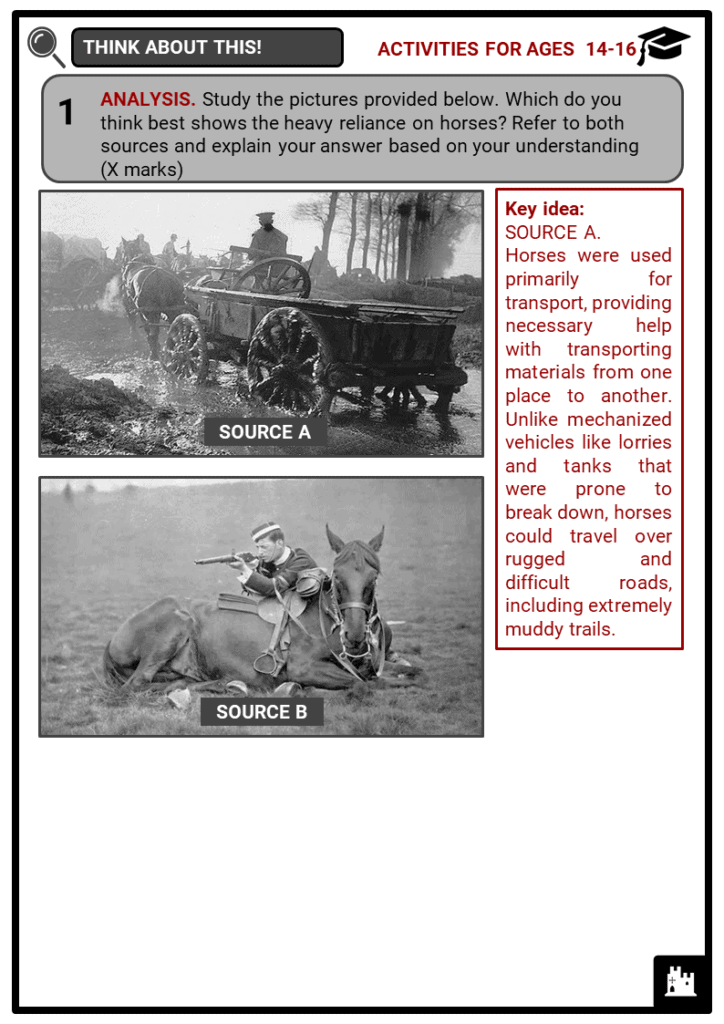 • Since ancient times, horses have been used for various reasons - the most common being transport.
• Horses were valued in war because of their speed, efficiency, and reliability.
• Horses were an integral part of World War I.

Horses were heavily relied upon in World War One, primarily for transport. They were first involved in the war in a British cavalry attack near Mons in August 1914.

Both Britain and Germany had a cavalry force that numbered about 100,000 men when the war broke out in Western Europe in August 1914. Each cavalry force required a large number of horses. Most senior military personnel during that era believed in the supremacy of the cavalry attack. In August 1914, when the war took a turn for the worst, no one could have foretold the horrors of trench warfare, hence cavalry regiments were considered superior. As a matter of fact, the cavalry regiments would have been seen as the greatest regiment in the British army and superior to the guard regiments. Many senior army positions were also held by cavalry officers.

The cavalry charge that occurred in Mons was the last seen in the war. Such charges were rendered impractical and simply not possible due to trench warfare. Some calvary changes were made possible, however. In March 1918, the Germans were attacked by a British cavalry charge. By the spring of 1918, out of the 150 warhorses that were used, only 4 made it back. German machine-gun fire was the main reason that most of the horses did not survive.

Despite the fact that cavalry charges were no longer a viable military tactic, horses were still crucial as a form of transport, transporting materials to the battlefronts. Horses remained reliable as military vehicles because mechanised vehicles, such as lorries and tanks, were prone to breakdowns as they were still relatively new inventions. Furthermore, horses and mules required little upkeep compared to lorries and trucks.

On the Western Front, more than 8 million horses died in battle. Veterinary hospitals treated over two and a half million horses with about two million being sufficiently cured and cleared to return to duty.

As horses were in demand during the First World War. Britain responded to this shortage by importing them from America and New Zealand with as many as 1,000,000 coming from America. This cost Britain 67.5 million pounds. Germany had a more elaborate system before the war. They had set up sponsored horse-breeding programmes in anticipation of the war. Their horses were registered every year, just like army reservists.

The Central Powers, unlike the Allies, were unable to import horses from overseas resulting in their defeat through paralysed artillery battalions and supply lines.

As men bonded with horses, army generals believed that their soldiers’ morale would be boosted by the presence of horses, a fact exploited in recruitment propaganda.

During the war, many horses died because of exhaustion, drowning, becoming mired (stuck in the mud) and falling into shell holes. In some cases, riders were killed and their horses captured. Horses were sometimes fed and cared for poorly, poison gas attacks injured their respiratory systems and skin, and skin conditions such as mange were common. The invention of improvised nose plugs, however, served to help horses in the event of a gas attack. Improved gas masks were later created by both the central and Allied nations, although most of the horses destroyed them mistaking them for feed bags.

A theory developed by soldiers was that less well-bred horses would have better performance than their well-bred counterparts. They believed that the latter would be shell-shocked and would act up when exposed to the sights and sounds of war, whereas the former would lie down and take cover at the sound of artillery fire.

Veterinary hospitals were built to help horses recover from shell shock and battle wounds, but thousands still died and lined the roads of the Western Front. Britain’s Army Veterinary Corps included 27,000 men and 1,300 veterinary surgeons. During the war, the British Army Veterinary Corp hospitals in France received 725,000 horses and more than three-quarters of them were treated successfully. Horses were transported from the front to veterinary hospitals by various forms of transport, including foot and rail. During the last months of the war, barges were considered ideal transportation for horses suffering wounds from shells and bombs.

Disease was also a major concern for horses at the front, with influenza, ringworm, sand colic, sores from fly bites and anthrax affecting many of them. The horses presented their own health hazard by making the trench conditions worse. Horse manure acted as breeding grounds for disease-carrying insects.

About 20 lb of fodder was fed to British horses, a fifth less than recommended by veterinary doctors. Horse fodder was the single largest import to Europe during the war. British forces lost 15% of their horses annually. Losses affected all sides and by the end of the war, the animal shortage was severe. New Zealander Bert Stokes said that in 1917 ‘to lose a horse was worse than losing a man because after all, men were replaceable while horses weren’t at that stage.’