Militarism as a cause of World War I Facts & Worksheets

Download Militarism as a cause of World War I Worksheets

Do you want to save dozens of hours in time? Get your evenings and weekends back? Be able to teach Militarism as a cause of World War I to your students? 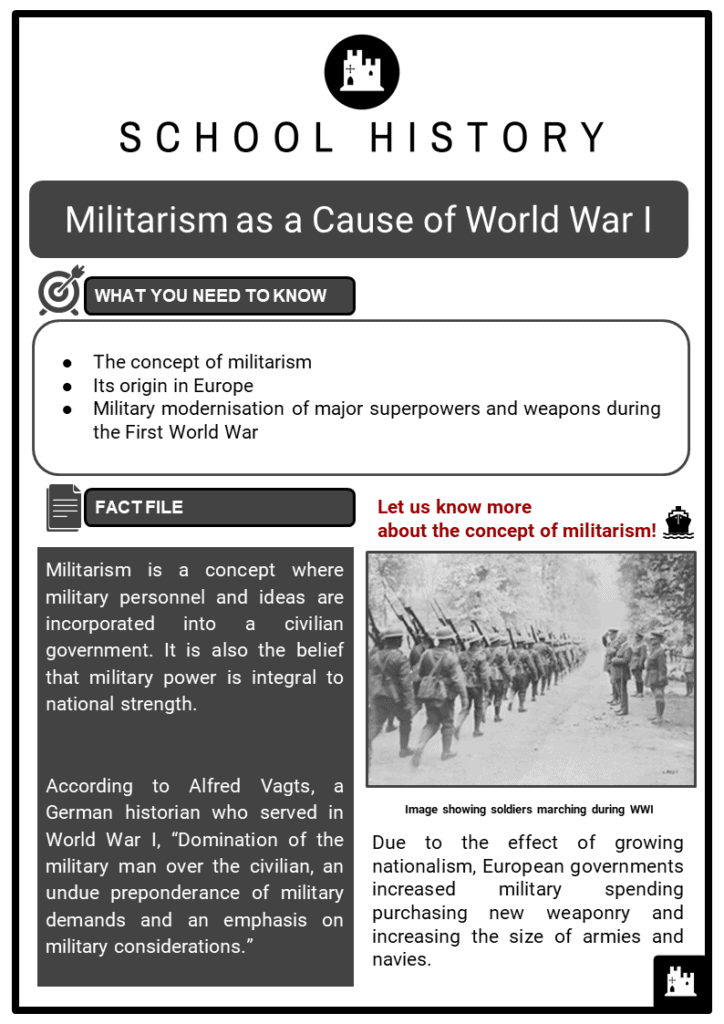 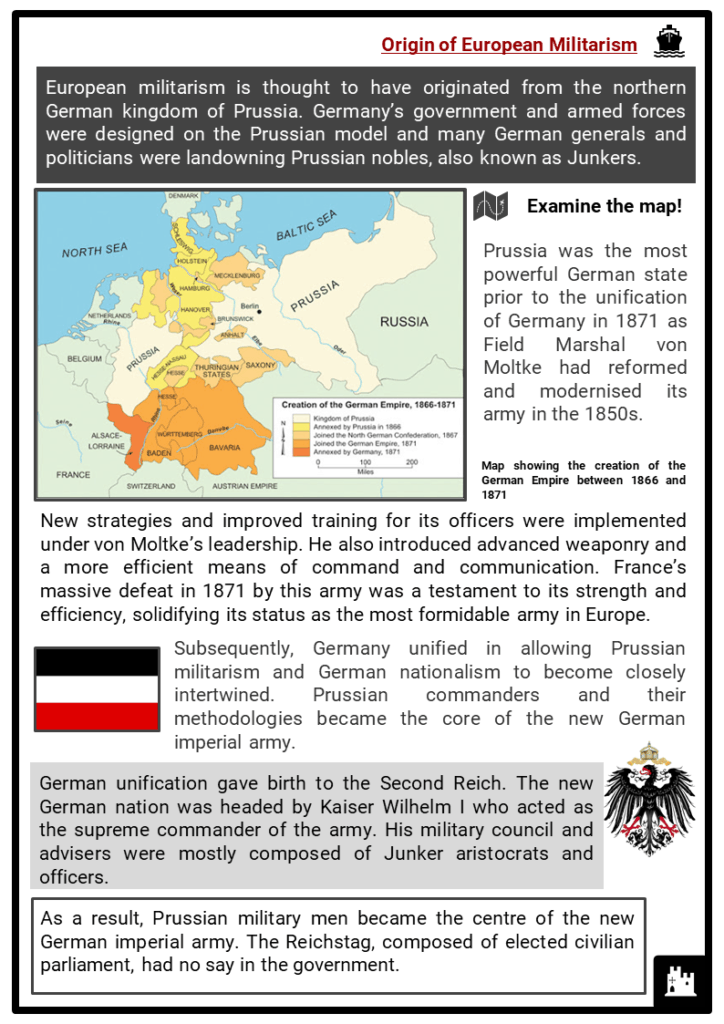 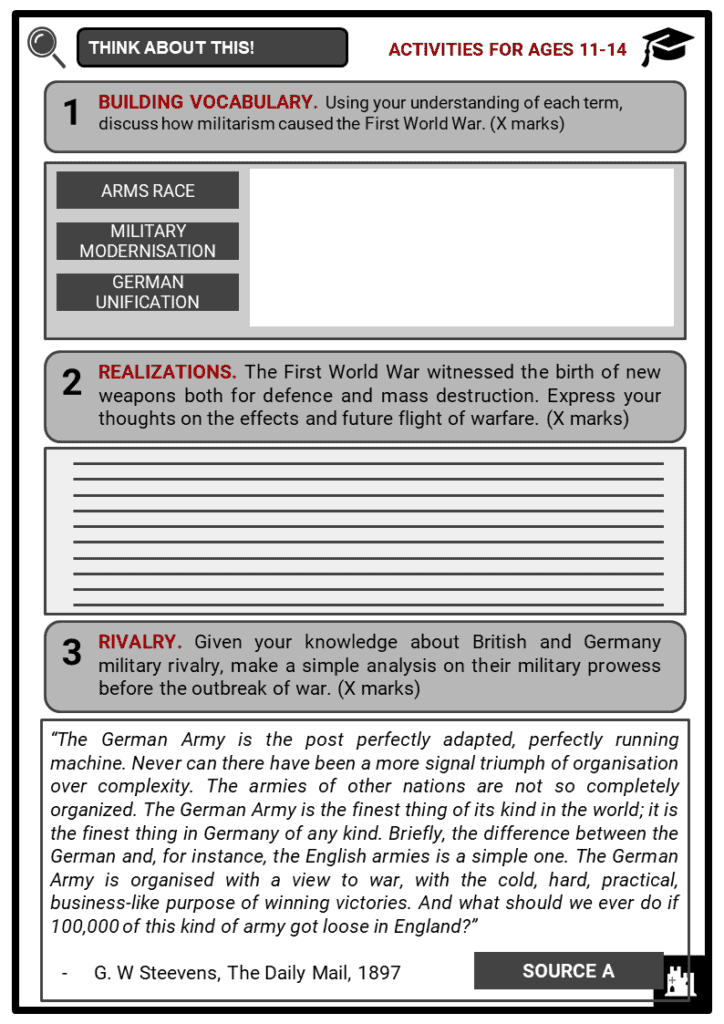 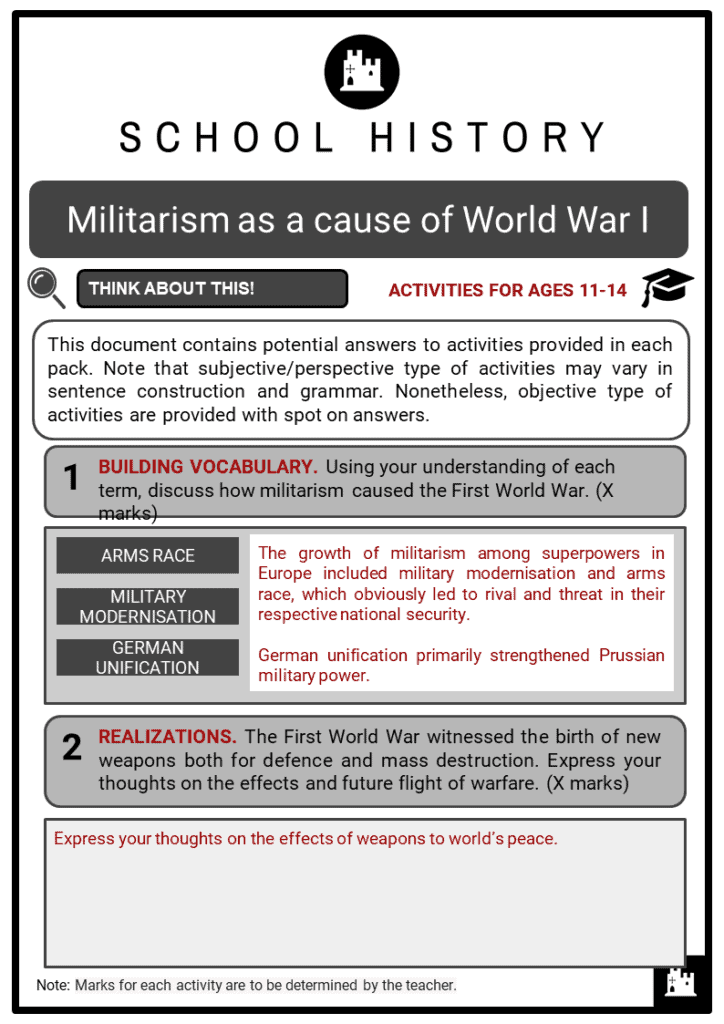 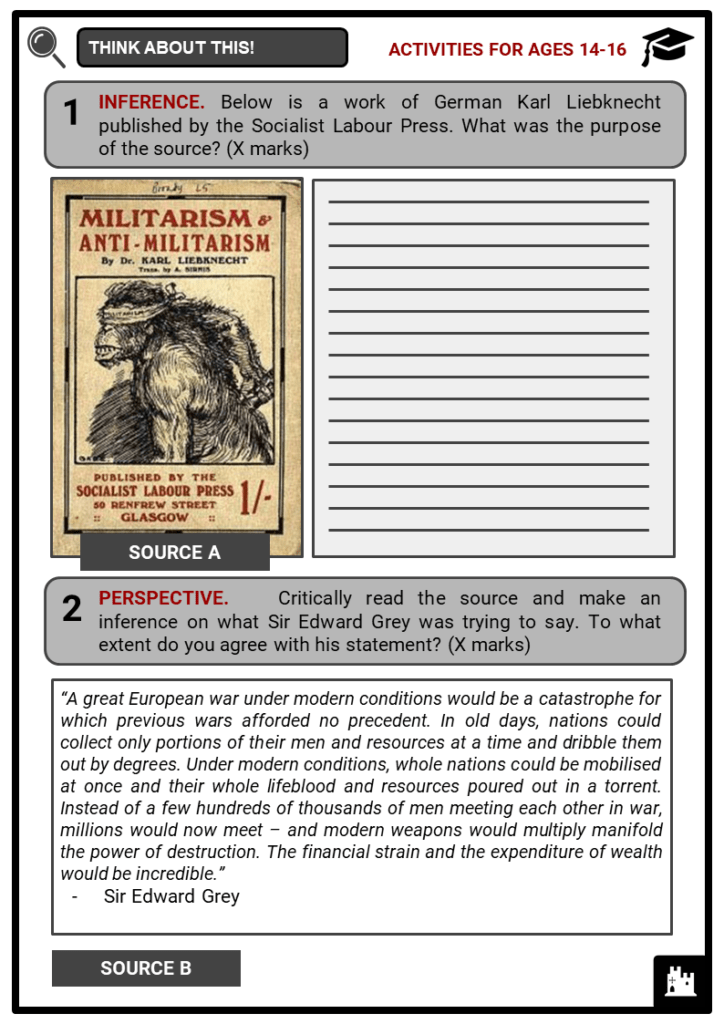 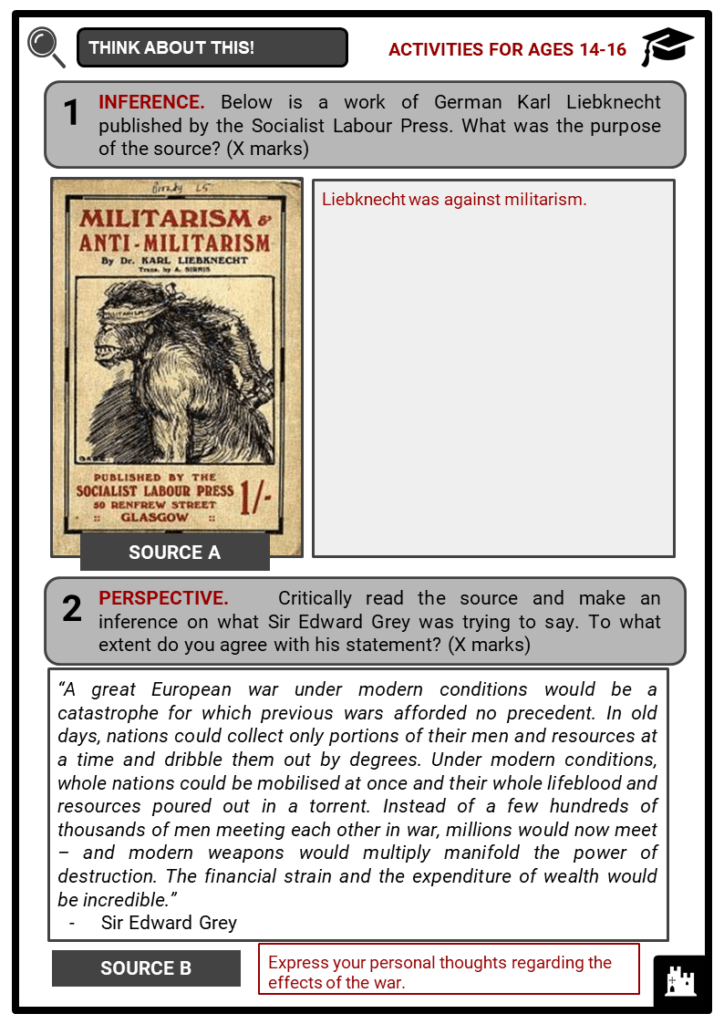 “Domination of the military man over the civilian, an undue preponderance of military demands and an emphasis on military considerations” was the definition given by Alfred Vagts, a German historian who served in World War I.

Militarism was an important force in several European nations before World War I. Military leaders had influence over civil governments and placed their interests and priorities first. Generals and admirals even acted as ministers and advisors. They influenced domestic policies and demanded increases in defence and arms spending. This trend led to an arms race, which gave rise to new military technologies. Militarism also shaped national culture, the media and public opinion. The press represented military leaders as heroes while painting rival nations as aggressors.

Militarism on its own could not start World War I but it created an environment where war could occur. Diplomacy and negotiations that could have resolved these disputes could not take place in this environment.

Militarism, nationalism and imperialism were all inherently connected as they complemented each other to start the First World War. Militaries in the 19th and early 20th centuries were considered a measure of national and imperial strength. A powerful nation needed the backing of a powerful military in order to protect its interests. To protect the homeland and imperial and trade interests abroad, strong armies and navies were needed but war was avoided where possible. If unavoidable, a war could be waged to advance a nation’s political or economic interests. In the 19th century, Europeans believed that politics and military power were inseparable, and one could not exist without the other, just like the modern world where politics and economic management are co-dependent. Nationalism made governments and leaders who failed to maintain armies and navies look weak and incompetent.

European militarism is thought to have originated from the northern German kingdom of Prussia. Germany’s government and armed forces were designed on the Prussian model and many German generals and politicians were land-owning Prussian nobles, also known as Junkers. Prussia was the most powerful German state prior to the unification of Germany in 1871 as Field Marshal von Moltke had reformed and modernised its army in the 1850s. New strategies and improved training for its officers were implemented under von Moltke’s leadership. He also introduced advanced weaponry and a more efficient means of command and communication. France’s massive defeat in 1871 by this army was a testament to its strength and efficiency solidifying its status as the most formidable army in Europe.

Subsequently, Germany unified in allowing Prussian militarism and German nationalism to become closely intertwined. Prussian commanders and their methodologies became the core of the new German imperial army. The German Kaiser acted as its supreme commander and was advised by a military council, which was made up of Junker aristocrats and career officers. The civilian government did not have a major role to play as they were only advisors.

In other parts of Europe, militarism looked different but it was still an important political and cultural force. In Britain, for example, militarism played an integral part in maintaining the nation’s imperial and trade interests, though more subdued than its German counterpart. Britain’s pride was the Royal Navy, which was, by far, the world’s largest naval force. It helped protect shipping and trade routes and colonial ports. Order was kept, and imperial policies implemented by British land forces in British colonies which included India, Africa, Asia and the Pacific.

British attitudes to the military underwent a transformation in the 19th century. Being a part of the British forces was depicted as a noble vocation and a selfless act of duty to one’s country. Just like in Germany, British soldiers were glorified and romanticised, both through the media and popular culture. This went against Britain’s initial thinking in the 18th century where they considered armies and navies an unnecessary evil. The ranks had been filled with the dregs of the lower class and most of their officers had not received sufficient training. This praise lauded on the soldiers was epitomised by Tennyson’s 1854 poem The Charge of the Light Brigade and was also reflected in popular novels about wars, both real and imagined.

Military victories, whether in colonial wars or major conflicts like the Crimean War (1853-56) or the Franco-Prussian War (1870-71) only served to increase the effect that militarism had and intensified nationalism. Conversely, military defeats like Russia losing to Japan in 1905 or the costly victory of Britain in the Boer War (1899-1902) exposed problems of militarism and heightened calls for military reform and decreased spending. Virtually every major European nation was involved in some form of military rejuvenation in the late 1800s and early 1900s. In Germany, the newly crowned Kaiser Wilhelm II fully endorsed military expansion and modernisation as he claimed to retain his country’s “place in the sun”.

Public interest and the press drove the arms race in Britain as the monarchy took a back seat. In 1884, W. T. Stead, a prominent journalist, published a series of articles suggesting that Britain was unprepared for war, particularly in its navy. This caused pressure groups like the British Navy League to voice their concerns and press for more ships and personnel. By the early 1900s, the Navy League and the press were calling on the government to commission more battleships. There was even a song composed, called We want eight and we won’t wait!, to drive this point home.

This pressure coupled with other factors caused European military expenditure between 1900 and 1914 to sky-rocket. The combined military expenditure of the six great powers (Britain, France, Germany, Austria-Hungary, Russia and Italy) totalled 94 million pounds in 1870 but it had increased by over four times to 398 million pounds by 1914. Germany’s expenditure during this period increased by over 73 percent, compared to France’s 10 percent and Britain’s 13 percent. Russia’s embarrassing defeat by the Japanese (1905) prompted the tsar to order massive changes in the form of a rearmament programme, causing Russian defence spending to increase by more than 33 percent. Around 45 percent of Russian government spending was allocated to the armed forces by 1910 with only five percent allocated to education.

Every major European power apart from Britain had introduced or increased conscription to expand their armies. This was mostly achieved by youth being forced to join the army. Germany added 170,000 full-time soldiers to its army in 1913-14, which in turn increased the size of its navy and the construction of 17 new vessels was ordered in 1898. Berlin was also exemplary in the construction of military submarines (U-boats) and by 1914 the German navy had 29 operational submarines. The British were highly suspicious of this and responded by adding 29 new ships to the Royal Navy.

There were changes in the quality and quantity of military weapons and equipment. After analysis of the Crimean War and other 19th century conflicts, military industrialists developed hundreds of improvements and rushed to patent them. Perhaps the most notable improvements were the calibre, range, accuracy and portability of heavy artillery and weapons. During the American Civil War (1861 - 1865), a type of heavy artillery was invented that could fire up to 2,500 metres and by early 1900, it had been further improved. The invention of explosive shells was also significant. They had greater killing power as they would explode wherever they landed. These inventions caused artillery attacks to become standard practice along the Western Front during World War I.

First developed in 1881, over time machine guns became smaller, lighter, more accurate, more reliable and faster with some capable of firing up to 600 rounds per minute. Small firearms also improved during this period. The effective range of a rifle in the 1860s was only about 400 metres. Barbed wire, an invention of the 1860s was also embraced by military strategists as it prevented enemies from getting past a defensive line. Historians often disagree on the reasons for the arms race but there is no mistaking that the development of new weaponry changed the face of modern warfare and the term ‘superpower’ as we know it.