Do you want to save dozens of hours in time? Get your evenings and weekends back? Be able to teach No Man’s Land to your students? 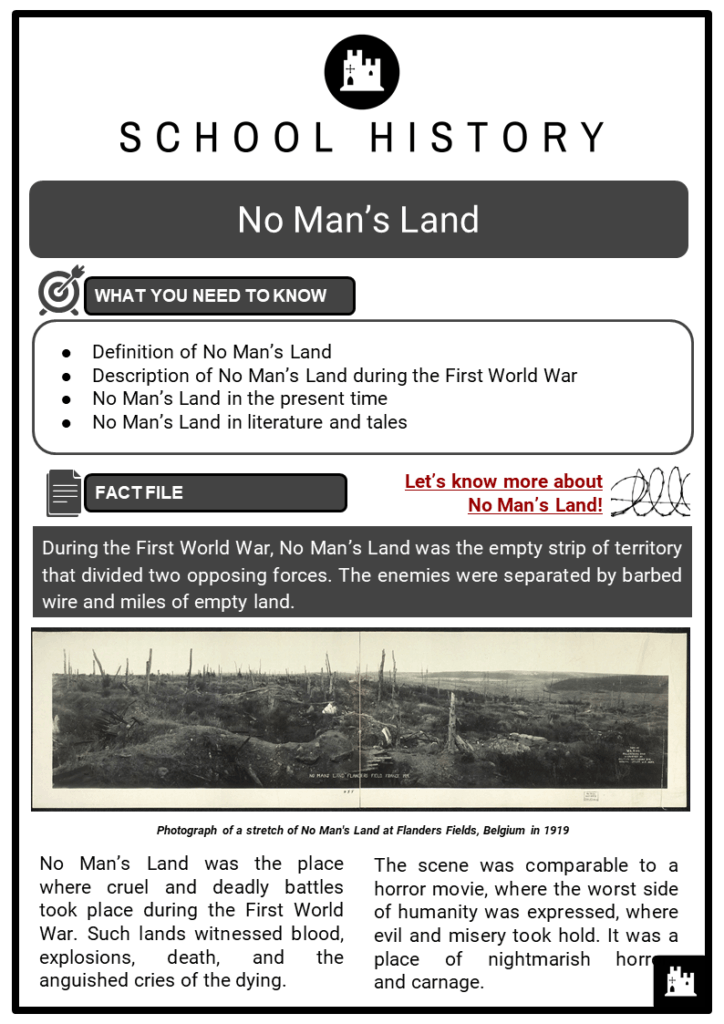 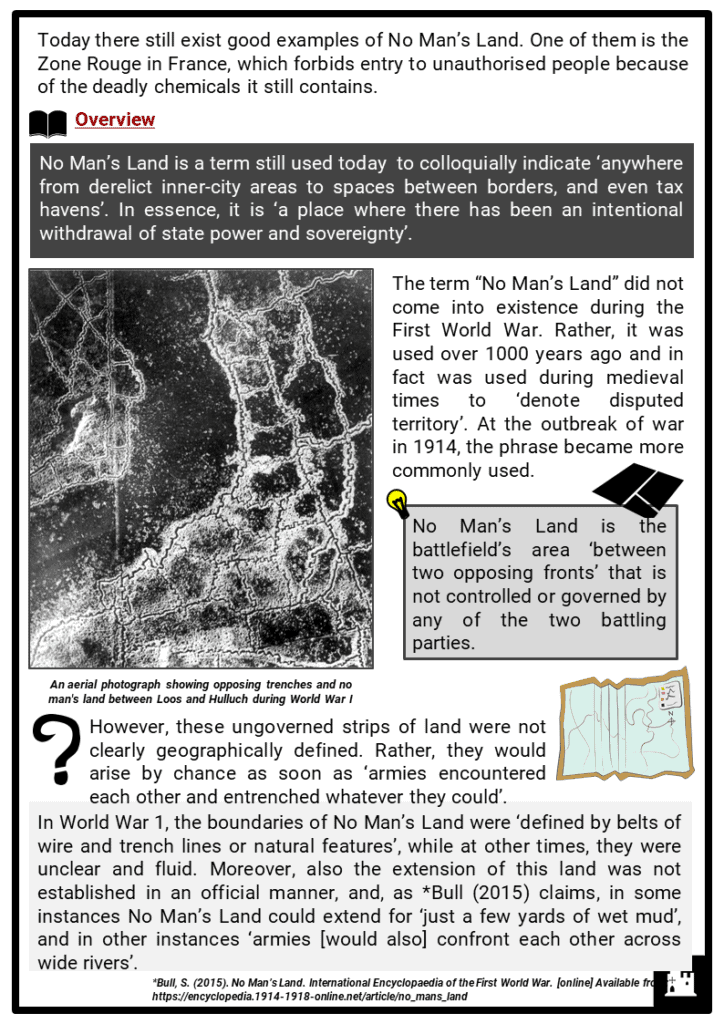 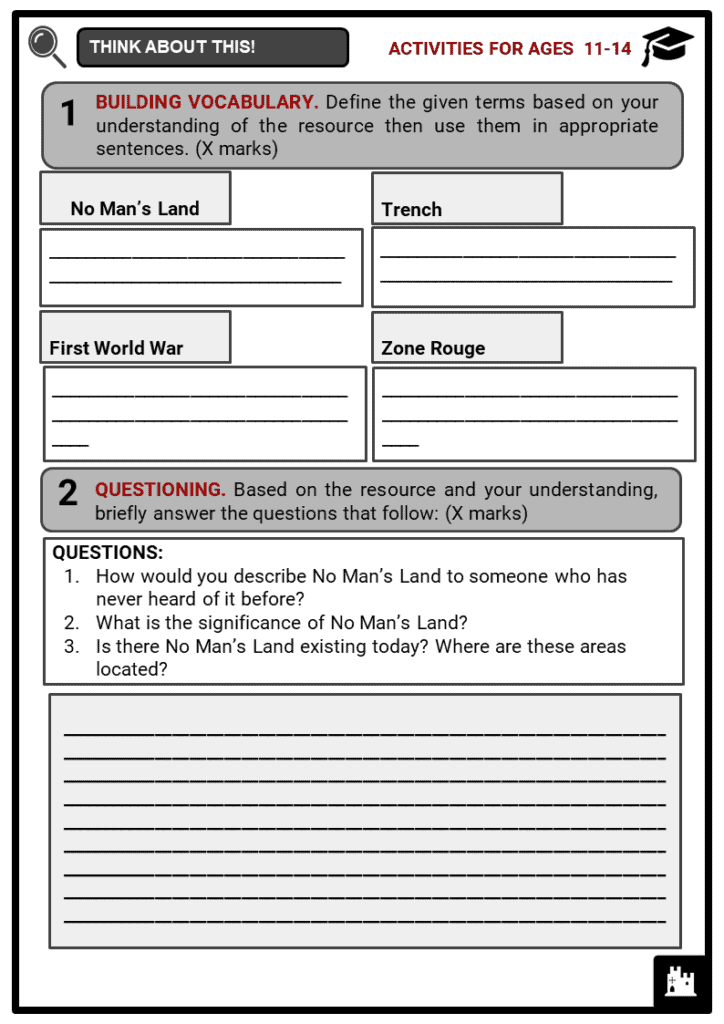 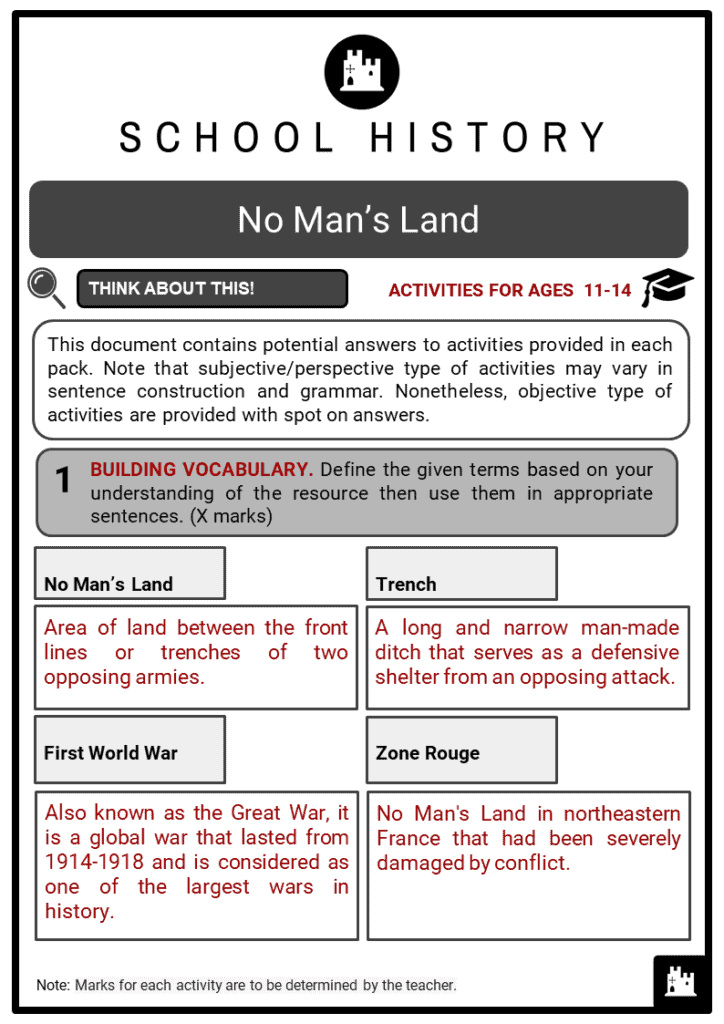 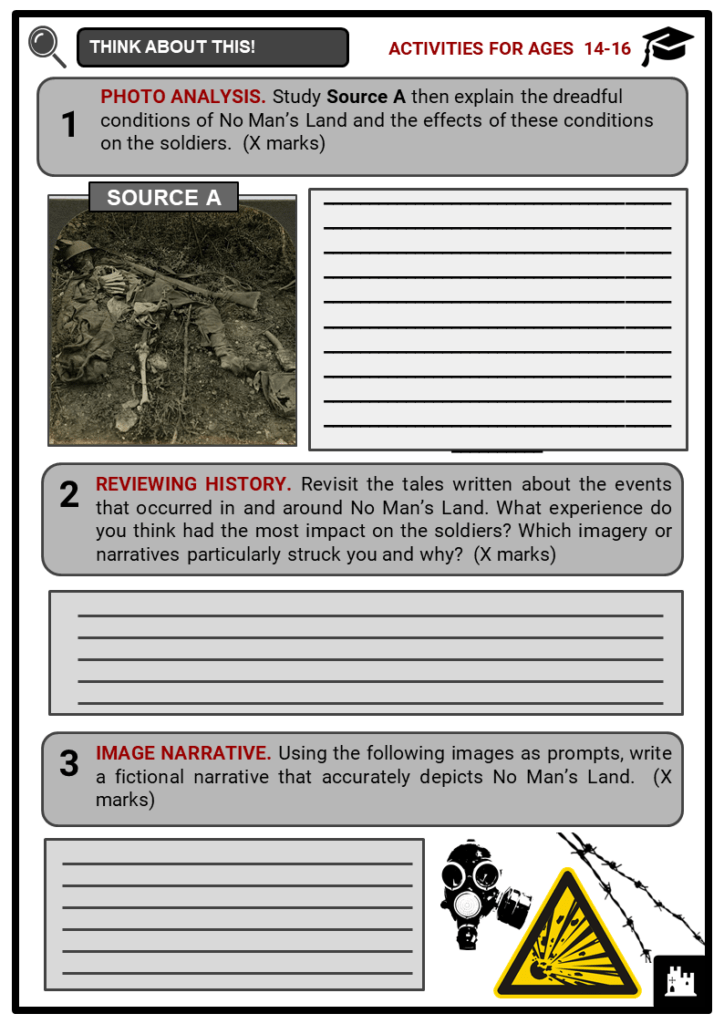 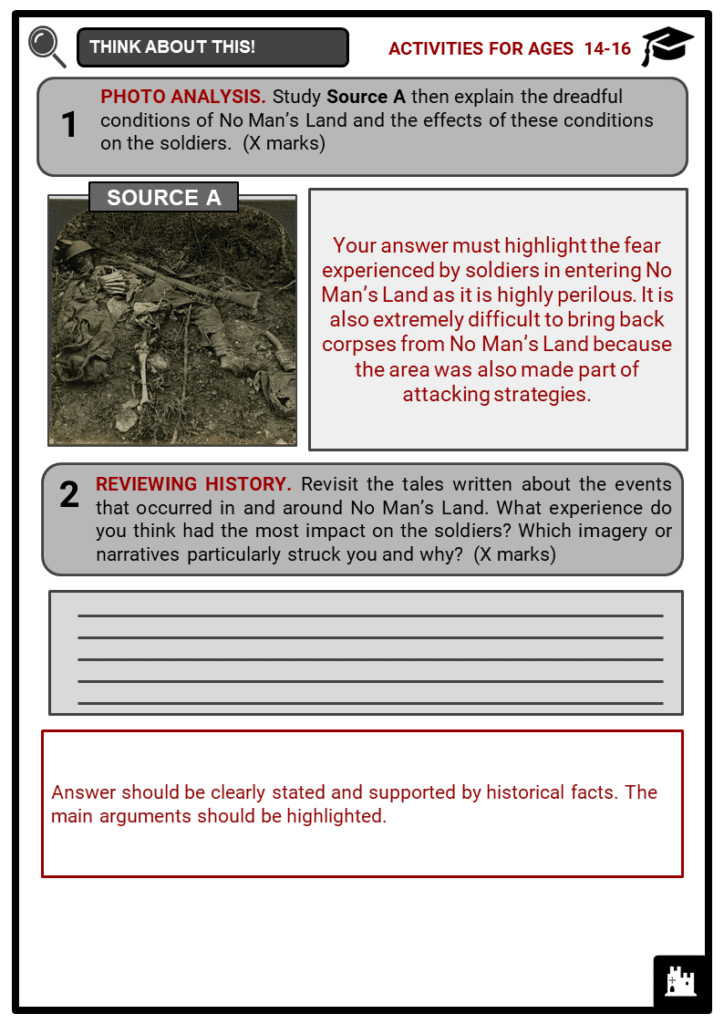 No Man’s Land is a term used to this date in order to ‘colloquially’ indicate ‘anywhere from derelict inner-city areas to spaces between borders, and even tax havens’ (Caffrey 2015; citing Pinketon). In essence, it is ‘a place where there has been an intentional withdrawal of state power state power and sovereignty’ (Caffrey 2015; citing Pinketon).

The term “No Man’s Land” did not come into existence during the First World War. Rather, not only was it already present in the English medieval era in order to ‘denote disputed territory’ (Bull 2015), it has existed for over a thousand years (Caffrey 2015; citing Pinketon). At the outbreak of the 1914, the word became more commonly used.

No Man’s Land is the battlefield’s area ‘between two opposing fronts’ (Caffrey 2015) that is not controlled or governed by any of the two battling parties.

However, these ungoverned strips of land were not clearly geographically defined. Rather, they would ‘arise’ by chance as soon as ‘armies encountered each other and entrenched whatever they could’ (Bull 2015). The boundaries of No Man’s Land were ‘defined by belts of wire and trench lines or natural features’ and other times, they were unclear and fluid (Bull 2015). Moreover, also the extension of this land was not established in an official manner”, and, as Bull (2015) claims, in some instances No Man’s Land could extend for ‘just a few yards of wet mud’, and on other instances ‘armies [would also]confront each other across wide rivers’ (Bull 2015).

Moreover, during the World War, retrieving the dead or wounded bodies on No Man’s Land was not simple task, since the empty strips of territory were used as part of their attacking methods, which would consist in ‘striking small demoralising blows’ (Bull 2015). This is also the reason why the First World War is defined as a static war: the presence of barbed wires, meant that the battles often fell into a state of stalemate, with none of the opposite forces advancing. Rather, each party stood in their own trenches and preferred attacking and striking their enemy from a distance. What separated the two battling factions’ trenches was an empty land, which offered ‘the new experience of “empty battlefield” (Bull 2015). In fact, both parties were ‘afraid to venture into’ No Man’s Land because of their ‘fear’ of what could happen if they did (Swancer 2015).

Most of the activity in No Man’s Land went on during the nighttime, since each side would spy on their enemies, or spend time repairing the barbed wire which divide the, or retrieving the bodies of dead or wounded soldiers.

What was in No Man’s Land

In her book The Great War in Irish Poetry: W.B. Yeats to Michael Longley (2000), the author Fran Brearton provides his readers with a gruesome image of what No Man Land presented: ‘men [were] drowning in shell-holes already filled with decaying flesh, wounded men, beyond help from behind the wire, dying over a number of days, their cries were audible, and often unbearable to those in the trenches; sappers buried alive beneath its surface’ (Deutsch 2014; citing Brearton 2000).

Although No Man’s Land was an empty ungoverned territory, it was nonetheless a scary place to be in during the battles of the Great War. In fact, this land was treated as a weapon, and it was characterised by craters, ‘barbed edged wire and shredded tree trunks’ (Caffrey 2015). Over the course of the battles, the territory would become a ‘wasteland’ characterised by ‘destroyed vegetation, mud-soaked craters, and rotting corpses (Duffy 2009).

The poet Wilfred Owen describes No Man’s Land as being ‘like the face of the moon, chaotic, crater-ridden, uninhabitable, awful, the abode of madness’ (Duetsch 2014; citing Owen).
The war’s landscape also changed drastically. In fact previously, soldiers were no longer on horses ‘with rifles in lined formation’, rather, the dynamics and the looks of the war were characterised by ‘zombie-like figures in trenches’ combatting with ‘portable machine guns, explosives, tanks, flamethrowers, air raids, and gas’ (Smith College Museum and Art no date). Although it was a dangerous enterprise, during the war, some artists engaged in the practice of documenting the modes of battle in their art. With the development of photography, some of them were able to capture and ‘expose the starkly beautiful, apocalyptic landscapes’. An example of such landscapes is The Cursed Wood (1918), by Christopher Richard Wynne Nevinson (Smith College Museum and Art no date).

Across Europe there still exist zones that are No Man’s Land. One of the most dangerous ones is the Zone Rouge, a small area near Verdun in the centre of France. It is a virgin forest that is around 460 square miles. Although historically it is one of the most interesting places that has witnessed the fierce and bloody battles of World War I, it remains to this day horrific, deadly and dangerous. In fact, its access is restricted, and whoever manages to enter this abandoned soil is not guaranteed an exit alive.

In 1918, at the end of the war, the French government realised that ‘it would take several centuries to completely see the area clear’: some believe that it would take between 300 and 700 years to make the area safe and inhabitable once again (Russell 2016).

According to Russell, although some areas of the Zone Rouge appear as an empty, harmless, ‘pristine forest’, it is nonetheless an insidious place that ‘hide[s] millions of explosives’ of which some have already ‘gone off’ and others are ‘just waiting for someone or something to set them off’ (2016). To this day, the authorised personnel of the Département du Déminage that enters the Zone Rouge, find ‘weapons, helmets’ and skeletons (Russell 2016). Moreover, it is necessary to keep in mind that during the First World War, weapons and explosives contained dangerous chemicals: in fact, the land contains high levels of mercury and zinc, whereas the arsenic levels reach 17% (which is 300 times more of what scientists deem as ‘tolerable’) (Russell 2016). In essence, all those chemicals present in the Zone Rouge have ‘impact[ed] the soil and the groundwater of the region, resulting in patches where little grown and where animals die’ (Russell 2016).

However, the presence of gas shells has a massive repercussion on human lives since ‘the build-up of toxins in the human body’ can take a while to be detected (Russell 2016). Therefore, also the areas surrounding the Zone Rouge are highly dangerous and poisonous. And although some people attempt to ‘exploit tourism’ in such historic venues, by building restaurants and shops, they remain incredibly unsafe (Russell 2016).

No Man’s Land, Literature, and Tales

The battlefield’s events during World War I fuelled horrific stories that recounted the ‘sinister, animalistic societies’ and the ‘cannibalistic lunatics’ that inhabited such areas (Swancer 2015).
According to some tales, in No Man’s Land existed wild men (who’s numbers ‘ranged anywhere from a battalion-sized group to regimental sizes’), that were made up of deserters of German, British, Canadian, Italian, French, Austrian and Australian nationality (Swancer 2015). They lived in subhuman conditions and they were described as being ‘ghostly pale, bearded men’ with scars on their face, and they were either naked or ‘dressed in tattered, filthy uniforms’ (Swancer 2015). The conditions they lived in were degrading since they had regressed to an animalistic state, for they ‘crept from their subterranean domain at night in order to scavenge weapons, food, shoes, and clothes off the bodies of the dead and dying’ (Swancer 2015). Sometimes, they would also indulge in eating their corpses and/or fight with other men for their flesh.

Moreover, numerous accounts can be retrieved in various books, journals, and memoirs. For instance, Arthus Hulme Beaman, talked about the wild deserted in his memoir The Squadroon (1920), in which he states that the officers and soldiers would often hear ‘inhuman cries and rifle shots coming from the awful wilderness as though the bestial denizens were fighting amongst themselves’ (Deutsch 2014; citing Beaman).

Similarly, in Walter Frederick Morris’s novel Behind the Lines (1930), the character Rawley was led underground by Alf (a deserter): ‘squeezed through the hole, feet first. He found himself in a low and narrow tunnel, revetted with rotting timbers and half-blocked with falls of earth. . . . The whole place was indescribably dirty and had a musty, earthy, garlicky smell, like the lair of a wild beast. . . . ‘Where do you draw your rations?’ asked Rawley. . . . ‘Scrounge it, [Alf] answered, . . . We live like perishin’ fightin’ cocks sometimes, I give you my word. . . . There’s several of us livin’ round ’ere in these old trenches, mostly working in pairs’ (Deutsch 2014; citing Morris 1930).

[3.] Deutsch, J. (2014). The Legend of what actually lived in the ‘no man’s land’ between WWI's trenches. [online] Available from: https://www.smithsonianmag.com/history/legends-what-actually-lived-no-mans-land-between-world-war-i-trenches-180952513/

[5.] Russell, S. (2016). The ‘Red Zone’ in France is so dangerous that 100 years after WWI, it is still a no-go area. [online] War History Online. Available from: https://www.warhistoryonline.com/world-war-i/this-red-zone-in-france-is-so-dangerous-100-years-after-wwi-it-is-still-a-no-go-area.html

[6.] Smith College Museum and Art (no date). No Man’s Land: Prints from the Front Lines of WWI. [online] Available from: https://www.smith.edu/artmuseum/On-View/No-Man-s-Land-Prints-from-the-Front-Lines-of-WWI