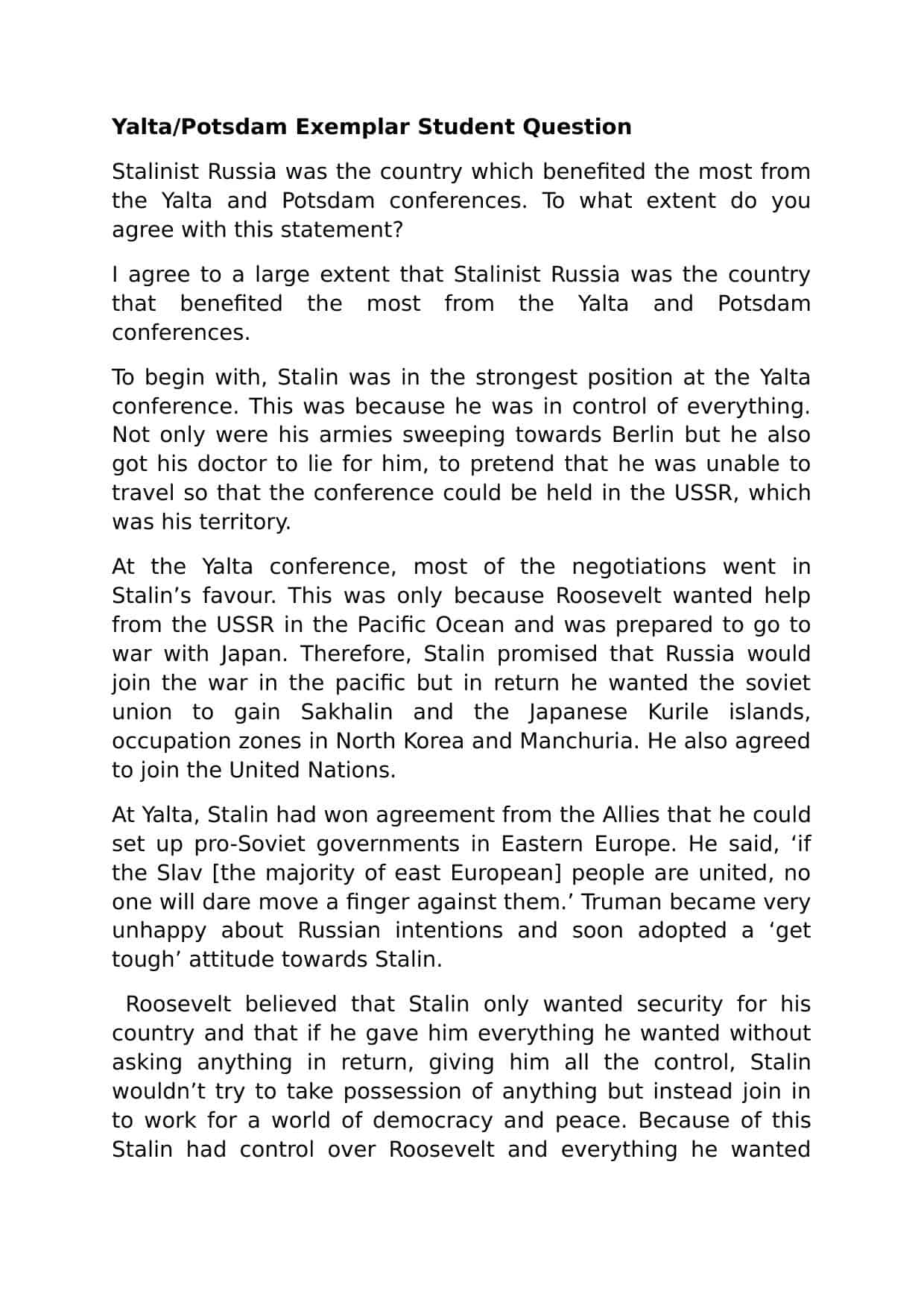 Stalinist Russia was the country which benefited the most from the Yalta and Potsdam conferences. To what extent do you agree with this statement?

I agree to a large extent that Stalinist Russia was the country that benefited the most from the Yalta and Potsdam conferences.

To begin with, Stalin was in the strongest position at the Yalta conference. This was because he was in control of everything. Not only were his armies sweeping towards Berlin but he also got his doctor to lie for him, to pretend that he was unable to travel so that the conference could be held in the USSR, which was his territory.
At the Yalta conference, most of the negotiations went in Stalin’s favour. This was only because Roosevelt wanted help from the USSR in the Pacific Ocean and was prepared to go to war with Japan. Therefore, Stalin promised that Russia would join the war in the pacific but in return he wanted the soviet union to gain Sakhalin and the Japanese Kurile islands, occupation zones in North Korea and Manchuria. He also agreed to join the United Nations.

At Yalta, Stalin had won agreement from the Allies that he could set up pro-Soviet governments in Eastern Europe. He said, ‘if the Slav [the majority of east European] people are united, no one will dare move a finger against them.’ Truman became very unhappy about Russian intentions and soon adopted a ‘get tough’ attitude towards Stalin.

Roosevelt believed that Stalin only wanted security for his country and that if he gave him everything he wanted without asking anything in return, giving him all the control, Stalin wouldn’t try to take possession of anything but instead join in to work for a world of democracy and peace. Because of this Stalin had control over Roosevelt and everything he wanted was just being handed over to him. Stalin was quietly gaining power over everything!

In addition, he was well-informed about his allies. In Britain, Stalin had a group of spies which were later known as “the Cambridge five”. Their job was to provide him with all the classified Foreign office documents he needed. That was not all; in America he also had Alger Hiss (a soviet spy working for the u.s. state department) actually succeeded in becoming a member of the American delegation.

Stalin’s armies were occupying most of Eastern Europe. Soviet troops had liberated country after country in Eastern Europe, but instead of withdrawing his troops Stalin had left them there. By July, Stalin’s troops effectively controlled the Baltic states, Finland, Poland, Czechoslovakia, Hungary, Bulgaria and Romania and refugees were fleeing out of these countries fearing a communist take-over. Stalin had set up a communist government in Poland, ignoring the wishes of the majority of poles. Britain and the USA protested, but Stalin defended his action. He insisted that his control of eastern Europe was a defensive measure against possible future attacks.