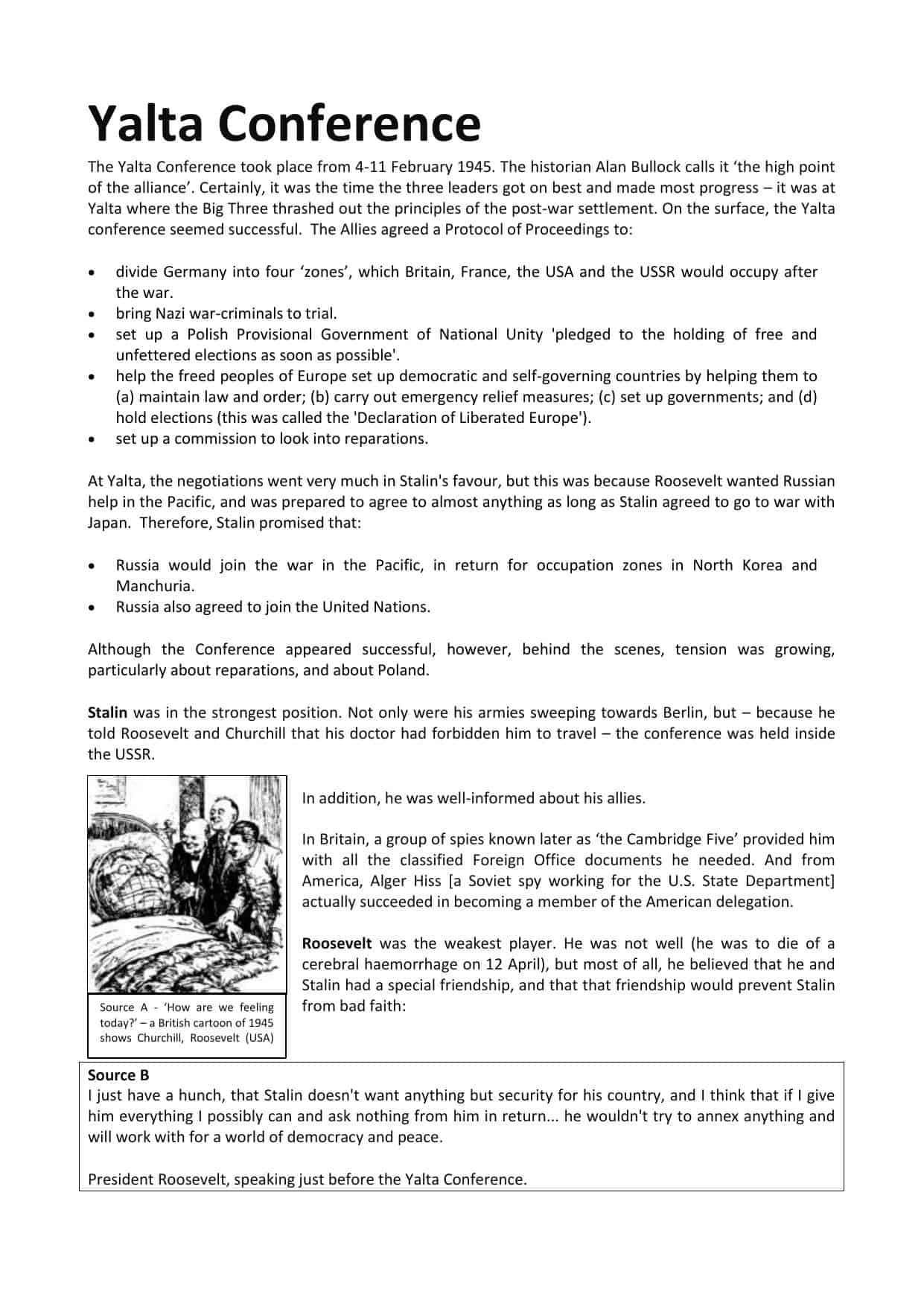 The Yalta Conference took place from 4-11 February 1945. The historian Alan Bullock calls it ‘the high point of the alliance’. Certainly, it was the time the three leaders got on best and made most progress – it was at Yalta where the Big Three thrashed out the principles of the post-war settlement. On the surface, the Yalta conference seemed successful.  The Allies agreed a Protocol of Proceedings to:

• divide Germany into four ‘zones’, which Britain, France, the USA and the USSR would occupy after the war.
• bring Nazi war-criminals to trial.
• set up a Polish Provisional Government of National Unity ‘pledged to the holding of free and unfettered elections as soon as possible’.
• help the freed peoples of Europe set up democratic and self-governing countries by helping them to (a) maintain law and order; (b) carry out emergency relief measures; (c) set up governments; and (d) hold elections (this was called the ‘Declaration of Liberated Europe’).
• set up a commission to look into reparations.
At Yalta, the negotiations went very much in Stalin’s favour, but this was because Roosevelt wanted Russian help in the Pacific, and was prepared to agree to almost anything as long as Stalin agreed to go to war with Japan.  Therefore, Stalin promised that:
• Russia would join the war in the Pacific, in return for occupation zones in North Korea and Manchuria.
• Russia also agreed to join the United Nations.
Although the Conference appeared successful, however, behind the scenes, tension was growing, particularly about reparations, and about Poland.
Stalin was in the strongest position. Not only were his armies sweeping towards Berlin, but – because he told Roosevelt and Churchill that his doctor had forbidden him to travel – the conference was held inside the USSR.

In addition, he was well-informed about his allies.

In Britain, a group of spies known later as ‘the Cambridge Five’ provided him with all the classified Foreign Office documents he needed. And from America, Alger Hiss [a Soviet spy working for the U.S. State Department] actually succeeded in becoming a member of the American delegation.

Roosevelt was the weakest player. He was not well (he was to die of a cerebral haemorrhage on 12 April), but most of all, he believed that he and Stalin had a special friendship, and that that friendship would prevent Stalin from bad faith:

So Roosevelt ignored the advice of Churchill (and many people in his own government) that he had to stand up to Stalin. His military advisers were telling him that the conquest of Japan would take many months and a million American casualties, and Roosevelt wanted Russian help in the Pacific … whatever the cost. Consequently, Roosevelt agreed a deal with Stalin whereby, in return for entering the Pacific War, the Soviet Union would gain Sakhalin and the Japanese Kurile islands, and zones of influence in Manchuria and North Korea.

And as for Europe, Roosevelt told his advisers that he wanted to stay out of the European settlement. So, again, it was left to Churchill to argue with Stalin about what would happen to Germany, about reparations, and about Poland.

However, at Yalta, Stalin appeared reasonable. He was friendly and affable. There are few stories of him baiting Churchill – indeed, he let Churchill win many of the negotiations. For example, Stalin wanted Germany ‘dismembered’, but agreed with Churchill to leave this to another discussion. He agreed with Churchill to set up a reparations committee. And as regards the governments of eastern Europe, he agreed the Declaration of Liberated Europe and suggested that free elections could be held within a month.

Churchill was becoming increasingly alarmed that Stalin intended to establish a Soviet empire in eastern Europe. At the conference, Churchill disagreed with Stalin about many issues – he believed that Stalin had to be prevented from conquering all of eastern Europe. However, Churchill came away from the Conference believing that he had negotiated a workable deal with Stalin, and that he could trust him:

After the conference, Churchill wrote a thank-you note to Stalin, thanking him for ‘all the hospitality and friendship extended to British delegation’.

Churchill also wrote to Roosevelt that ‘The Soviet Union has become a danger to the free world.’  And on their return home both he and Roosevelt were criticised for giving away too much to the Soviets.